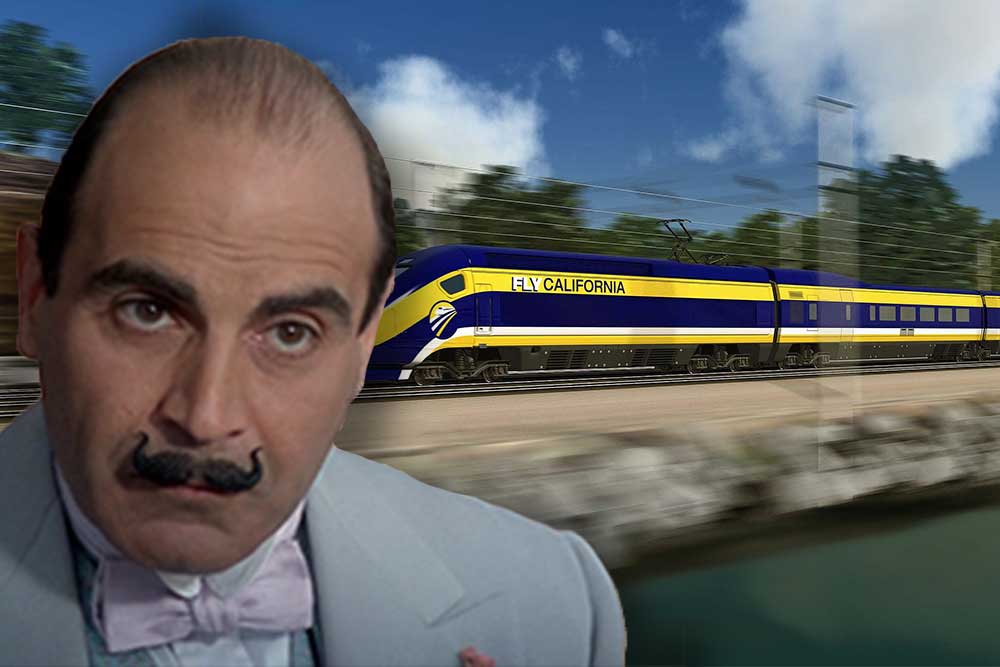 Where’s Hercule Poirot when you need him? Columnist Joe Mathews sounds the alarm that there’s been a murder—the murder of the high-speed Southern California rail. But who’s responsible for the death of the project? Illustration by Zócalo; images courtesy of Wikimedia Commons, Public Domain.


“Stop where you are,” declared the short, mustachioed, dandily dressed detective, in a European accent, as he entered the Assembly chamber.

“I am informed there has been a murder, right here in the Capitol!”

Legislators looked puzzled. This was like something out of an Agatha Christie novel.

A progressive Democrat rose and said: “We are unaware of any murders, other than the usual killing of moderates’ political careers. Who’s your victim?”

The detective held up a handkerchief bearing the monogram, “HSR.”

“These are the victim’s initials.”

“That can’t be!” shouted the governor, who had rushed to the chamber upon hearing, mistakenly, that there might be international media present. “The only HSR we know is high-speed rail, the most ambitious such project in the country. And that’s not dead.”

The detective arched an eyebrow. “How can you be so sure?”

“Because I’m saving it,” the governor said, “by downsizing the whole San Francisco-to-L.A. project into a Central Valley-only, Merced-to-Bakersfield route.”

“Governor, do you understand you have just confessed?” the detective replied. “Proposing a $100 billion train between two smaller cities without a single Michelin star restaurant between them actually demonstrates homicidal intent toward the whole idea of passenger rail.

“My next question is: Governor, did you act alone?”

“Are you accusing me, Detective?” the Assembly speaker chimed in from the dais. “Who are you anyway? How did you get here?”

“The name is M. Hercule Poirot and if you must know, I was on the express from Paris to Istanbul when I got the call from Interpol. So, I flew Turkish Airlines to SFO direct, and took the BART under the Bay to catch the Amtrak Capitol Corridor to Sacramento, which was lovely but empty. Then I made the mistake of trying Sacramento light rail, which looked and smelled like a crime scene … but, Mr. Speaker, you haven’t answered my question.”

“Well,” the speaker replied, “you can’t be suggesting that the Democratic lawmakers from Los Angeles and San Diego have killed it. In fact, we’re trying to make high-speed rail even more powerful, by repurposing some of the money from the Central Valley to regional rail projects across Southern California.”

‘Stop where you are,’ declared the short, mustachioed, dandily dressed detective, in a European accent, as he entered the Assembly chamber.

‘I am informed there has been a murder, right here in the Capitol!’

Poirot furrowed his brow. “Repurposing? That is a curious choice of words. And you are doing this, I read, by denying the project $4.2 billion in voter-approved bond funds intended to keep the construction going. Mr. Speaker, the legislature is at the very top of my list of suspects. I don’t care about your campaigns; none of you may leave Sacramento.”

“Why are you blaming the Democrats for the murder?” said the Republcian leader rising. “We’ve been working to kill high-speed rail for years. We call it the ‘Crazy Train,’ like the Ozzy Osbourne song. He’s from Europe, like you. Punish us.

“Not exactly. He’s from Birmingham, England, and I’m Belgian. And why should I believe your confession? It’s hard to take your word for anything. Most of you say the last election was rigged. Is your opposition to the project real? High-speed rail could provide a big economic stimulus for the Central Valley region that so many of you Republicans represent. How does killing it make any sense? You are engaged in self-harm. I’m having you held for observation and psychological evaluation.”

There was noise from the gallery, as lobbyists and others filed in to watch the detective’s investigation. One stood up and said, “Detective, I’m from the building and construction trades, and you’re wrong. Our labor organizations are powerful and doesn’t want this dead. We want our members to build it. We’ve protected high-speed rail for years—including from legislative oversight.”

“And hasn’t that worked well?” the detective asked rhetorically. “Also, you demand wages that would be considered extortionate even among the guilds of the European continent. Your demands have made building high-speed rail, or anything else, scandalously expensive in this state. Please consider yourself under suspicion for the death of this project and the California dream.”

Another visitor spoke up. “I represent the California High-Speed Rail Authority, and I assure you we are still constructing high-speed rail and are committed to finishing the project.”

“I’m sorry. But do you have all the land assembled to build the rail, 14 years after voters approved the project?”

“How about the utility relocations?”

“We’re almost halfway there in the Central Valley.”

“And does the authority have the necessary staff to manage such a project?”

“I can’t speak to that. I’m just one of the consultants.”

The detective surveyed a legislative chamber full of suspects. He thought for a minute.

“This reminds me of a case from much earlier in my career, written up in a book called Murder on the Orient Express. A train got stuck, and a man was murdered.”

“I had a wide variety of suspects. The passengers all put on a great show of saying they were trying to save the victim. But in the end, all were guilty.

“The difference between California high-speed rail and that railway murder is that on the Orient Express, those killers had the grace to acknowledge what they’d done. So, I showed them mercy.

“A recent poll shows Californians still want high-speed rail, so you refuse to confess. You’ve killed HSR already. But you can’t cop to the crime.”