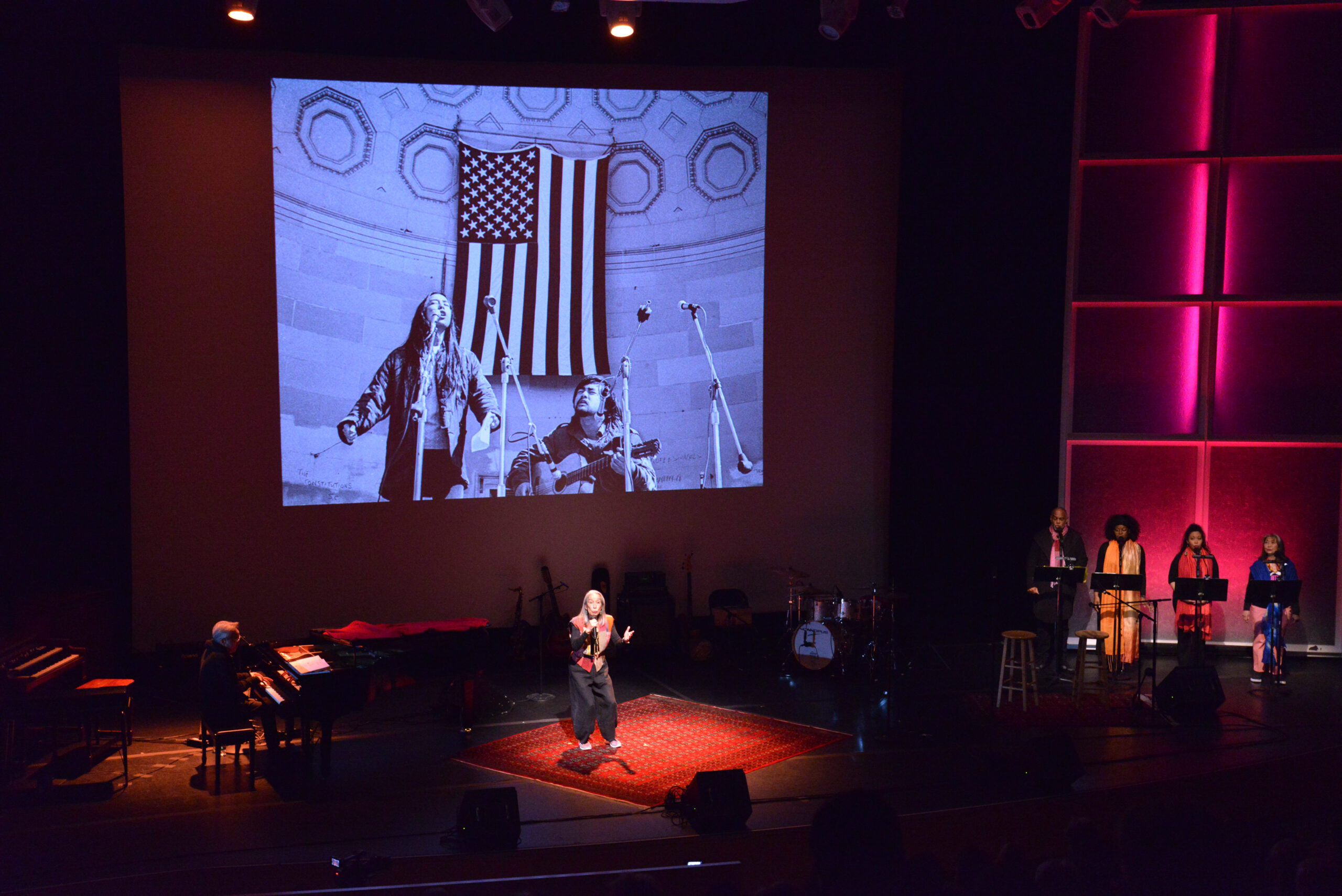 Nobuko Miyamoto performs in front of an image of her and Chris Iijima. Photo by Daren Mooko. 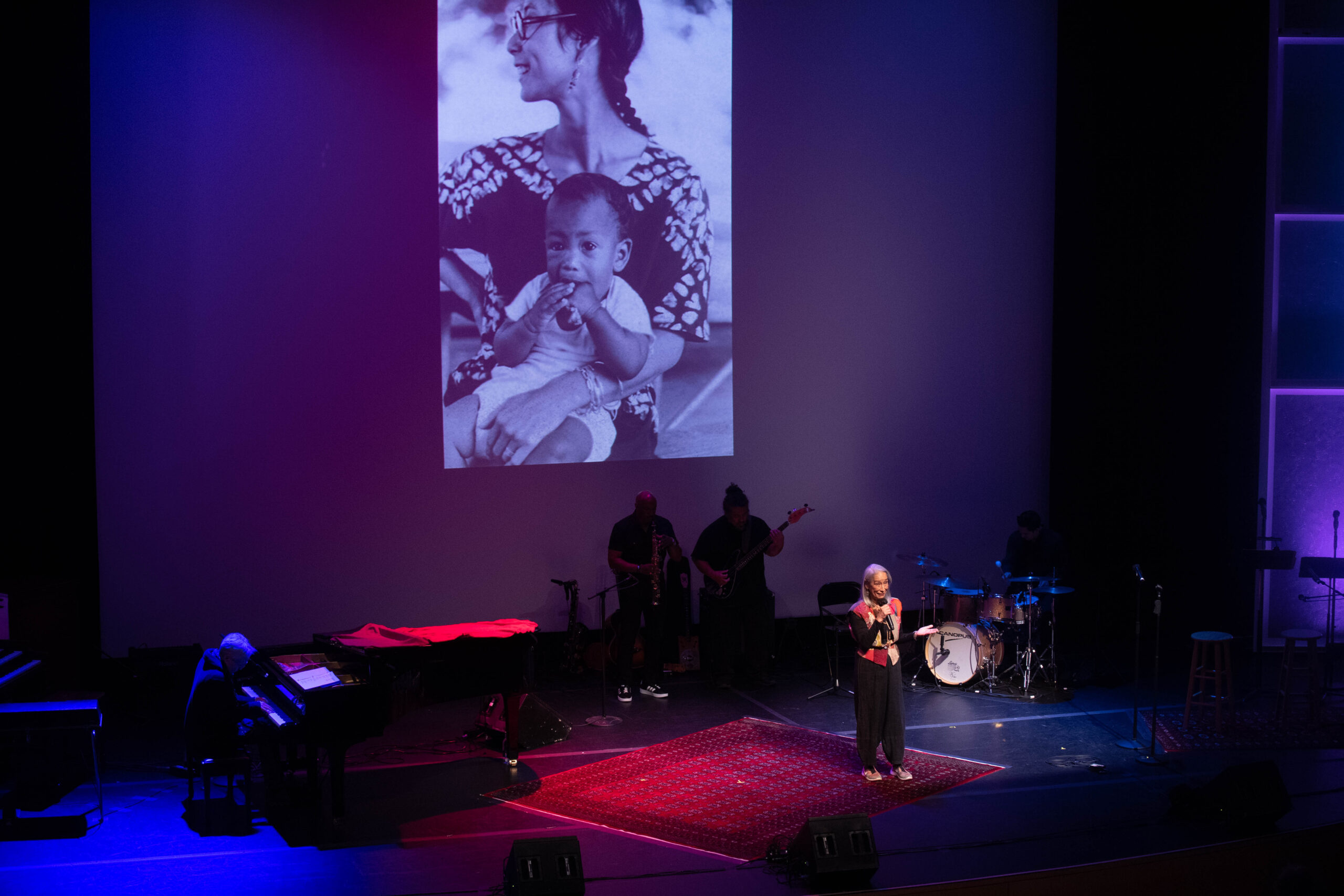 Nobuko Miyamoto performs in front of an image of her and her son. Photo by Daren Mooko. 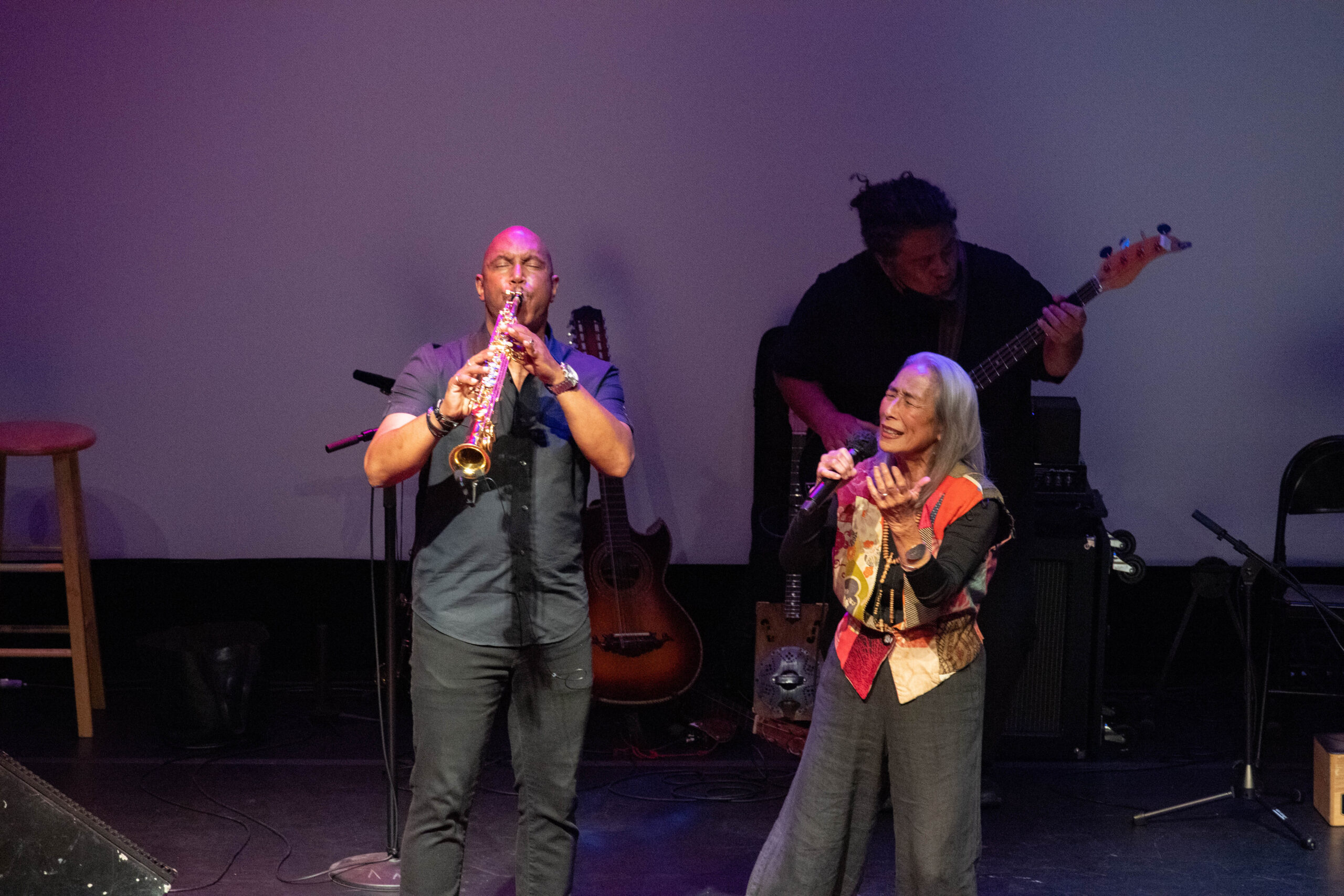 Nobuko Miyamoto accompanied by her band at the Getty’s Day of Remembrance event. Photo by Daren Mooko. 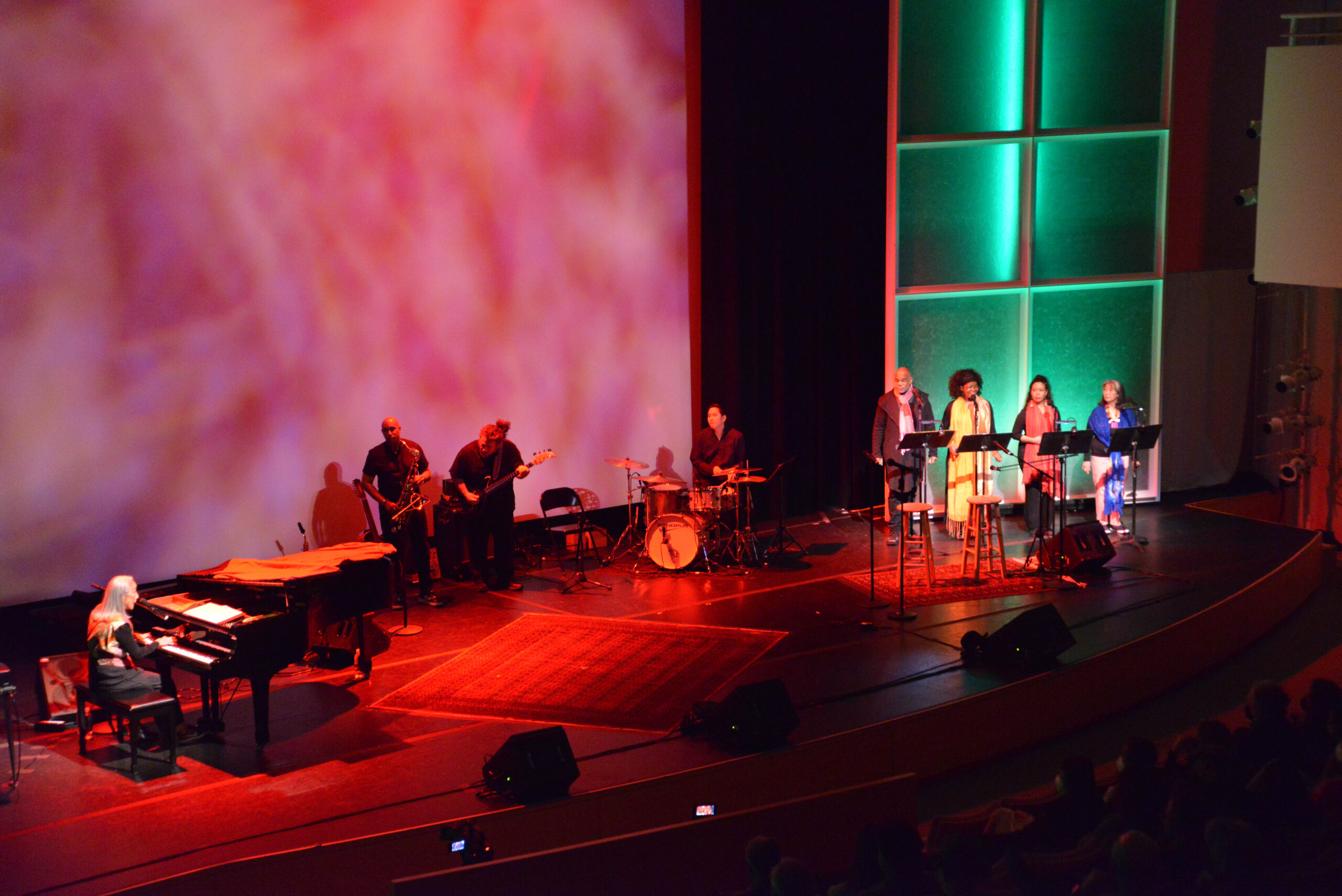 Miyamoto and the band on stage. Photo by Daren Mooko. 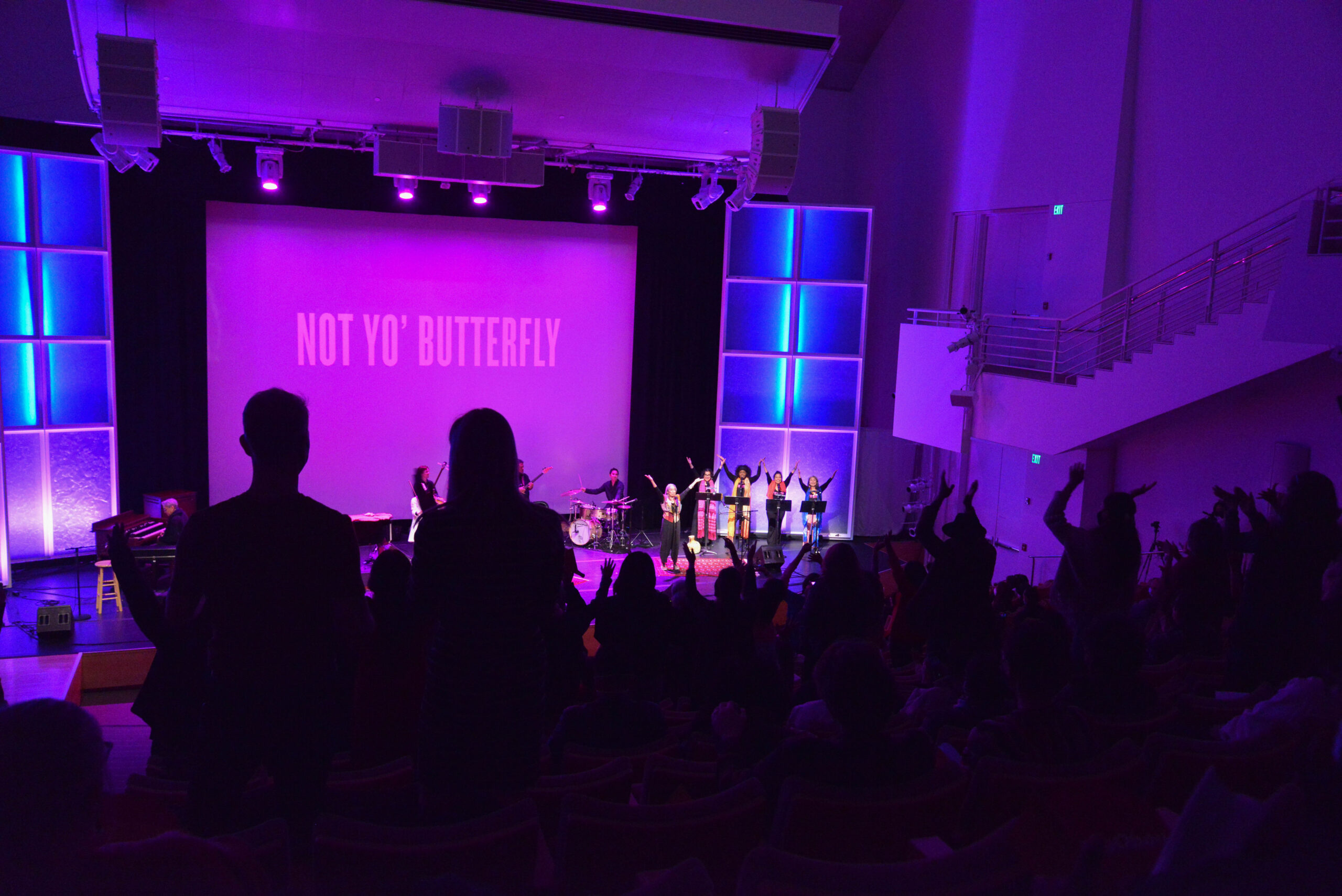 The crowd watches a performance of Miyamoto’s “Not Yo’ Butterfly,” a song that rejects the Italian composer Giacomo Puccini’s depiction of Asian women in Madame Butterfly. Photo by Daren Mooko. 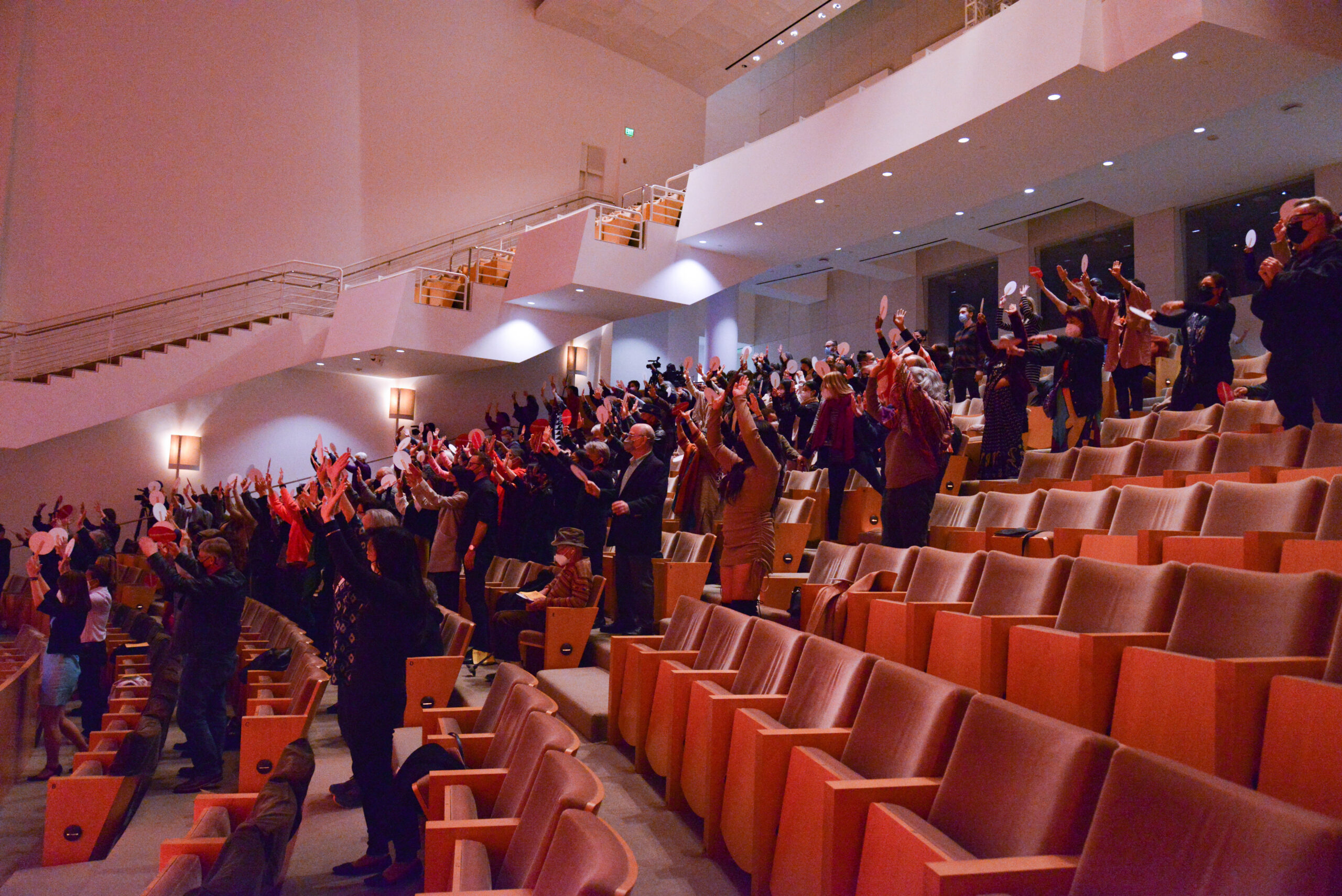 The audience rises to its feet to perform a dance in the style of Bon Odori together. Photo by Daren Mooko.


Since the 1970s, Japanese Americans have observed the Day of Remembrance on February 19, the anniversary of Franklin D. Roosevelt’s signing of Executive Order 9066 that authorized the forced removal and incarceration of all people of Japanese ancestry living on the West Coast. Activists conceived DOR as a radical act to bolster the then-faltering movement for redress and reparations.

Today, it largely is embedded in mainstream Japanese American culture, but this year’s musical commemoration at the Getty Center in Los Angeles—“120,000 STORIES with Nobuko Miyamoto and Guests,” presented in collaboration with the Japanese American National Museum and the Smithsonian Folklife Festival—reconnected it to its radical origins and linked it to today’s racial and social justice activism.

Nobuko (as I call her) is an icon of Asian America who has melded art, culture, and politics in her life and work since the 1960s.

A professional dancer early on in her career, Nobuko was a rare Asian cast member of the original West Side Story film and performed on Broadway. But before all of that, she was one of the roughly 120,000 Japanese Americans the U.S. government incarcerated during World War II.

The “120,000 STORIES” are for all of those incarcerees, and the program begins with songs about their experiences at camp, as Nobuko and all of the other Japanese Americans I know, including my own family, learned to call it—just camp, not modified by internment or incarceration or concentration. Her first song is familiar to me: Nobuko going to the camp at the Santa Anita Racetrack, holding her obaachan (grandmother)’s hand on the way to the toilets with no privacy, wondering if they would be interned there all their lives.

Camp—camp plays, camp music, camp art, camp photography—has been our default genre for so long that it can be hard to imagine any other Japanese American genres. But breaking through the camp narrative has been part of Nobuko’s life’s work, and this is reflected in the expansive performances and stories shared on stage that night. This is why, alongside stories of her family moving to Boyle Heights after the war and of her brother-in-law biking from Pasadena to Santa Anita Racetrack searching for his Japanese American neighbors, she includes a narrative about joining her mother-in-law, Mamie Kirkland, who is Black, on a pilgrimage to her Mississippi hometown nearly a century after the family was forced to flee from a lynch mob.

Nobuko also performed songs by the late Chris Iijima, who she traveled the country in the 1970s with making Asian American folk and protest music. Collaborating with musician Charlie Chin, they eventually recorded Grain of Sand, considered the first album made by artists who called themselves Asian American, embracing the pan-ethnic term coined by activists in the late 1960s.

Camp—camp plays, camp music, camp art, camp photography—has been our default genre for so long that it can be hard to imagine any other Japanese American genres. But breaking through the camp narrative has been part of Nobuko’s life’s work, which she reflected in the expansive performances and stories that followed.

And Nobuko spoke about her fears of raising her Black son, who was only 10 weeks old when his father, Attallah Ayyubi, was killed at the Ya-Sin Mosque, a major gathering place for Black Muslims in 1960s and ’70s Brooklyn.

By the end of the show, nearly 20 musicians joined Nobuko on stage, from shakuhachi and taiko players to violinists. Los Angeles musicians and community organizers Atomic Nancy of the Atomic café, Sean Miura of Tuesday Night Project, artist Dan Kwong, and Quetzal Flores were among those who brought their own radical histories and musical lineages into the room.

Nobuko’s work gathers and galvanizes artists and audience, musicians and activists, alike. Sitting in the theater that night were the aunties and uncles of the 1960s and ’70s Asian American movement. They were members of Nikkei for Civil Rights and Redress, who won reparations for those incarcerated people; of Gidra, the monthly newsletter that was “the voice of the Asian American experience” from 1969 to 1974; and of the Little Tokyo People’s Rights Organization, which fought against redevelopment in their downtown L.A. neighborhood in the ’70s and ’80s.

Their stories, and Nobuko’s, are as primal as any folktale or origin story for me, and for so many others. They are embedded into the work of reimagining our narratives today.

In January 2021, JTOWN Action and Solidarity—a group I co-founded, but of which I am no longer an active member of—started weekly mutual-aid actions at the main encampment of unhoused residents in Little Tokyo, providing electricity to charge their devices, personal protective equipment, food, and other essential items. These weekly “Power Ups” became a way to build connections among community members, housed and unhoused, and today

include open mics, communal tables, and birthday celebrations. But the effort provoked conflict with and within the community. Some of Little Tokyo’s small, legacy businesses, struggling through the pandemic, believed that supporting the unhoused and bringing visitors back to the neighborhood were mutually exclusive.

The conflict escalated on the Day of Remembrance, when JTOWN Action and Solidarity released a statement about reparations. They asked why only Japanese Americans had received redress—in contrast to other groups also forcibly removed and incarcerated during the war, such as Alaska Natives or Japanese Latin Americans. By extension, they questioned the very possibility of reparations to address injustice, given that they are functions of an inherently unjust, illegitimate state that continues to forcibly colonize indigenous land. To some, this was a denigration of hard-won battles. To others, it was a show of urgent solidarity.

But despite such conflicts, the people in the audience that day, and the Japanese Americans engaged in this work, were raised by the stories of 120,000 incarcerated to believe in the possibility of a better world. That evening at the Getty brought us together and reminded us of this shared endeavor. It sought to highlight our intimacy in all its thrilling, maddening contention.

And at our center was Nobuko, the feminist troubadour who used her voice to create our folk songs, manifestos, and mythologies, for whom multiculturalism and coalition-building was the source and handiwork of her life-art.

When introducing “Not Yo’ Butterfly,” a song that shares its title with her recently published memoir, she addressed Giacomo Puccini, the Italian composer who wrote Madame Butterfly, the opera “that has plagued Asian women ever since.” All those aunties who were the Asian American Movement got up and danced, a joyous rejection of Madame Butterfly, and all her progeny, the fantasized figures of weak Asian women, subject to the desires and violence of a racist world.

One of Nobuko’s last songs of the evening was “Bambutsu.” Before performing it, she taught us the looping choreography of the accompanying dance in the style of Bon Odori, the traditional Japanese folk dance performed in a circle during the summer festivals that honor the harvest, spirits, and ancestors. Because of the pandemic, it had been a long time since I last danced Bon Odori in temple parking lots or on the streets of Little Tokyo. But there we were, in the auditorium, together. We all rose to our feet, guided by Nobuko’s movements, guided by our memories.