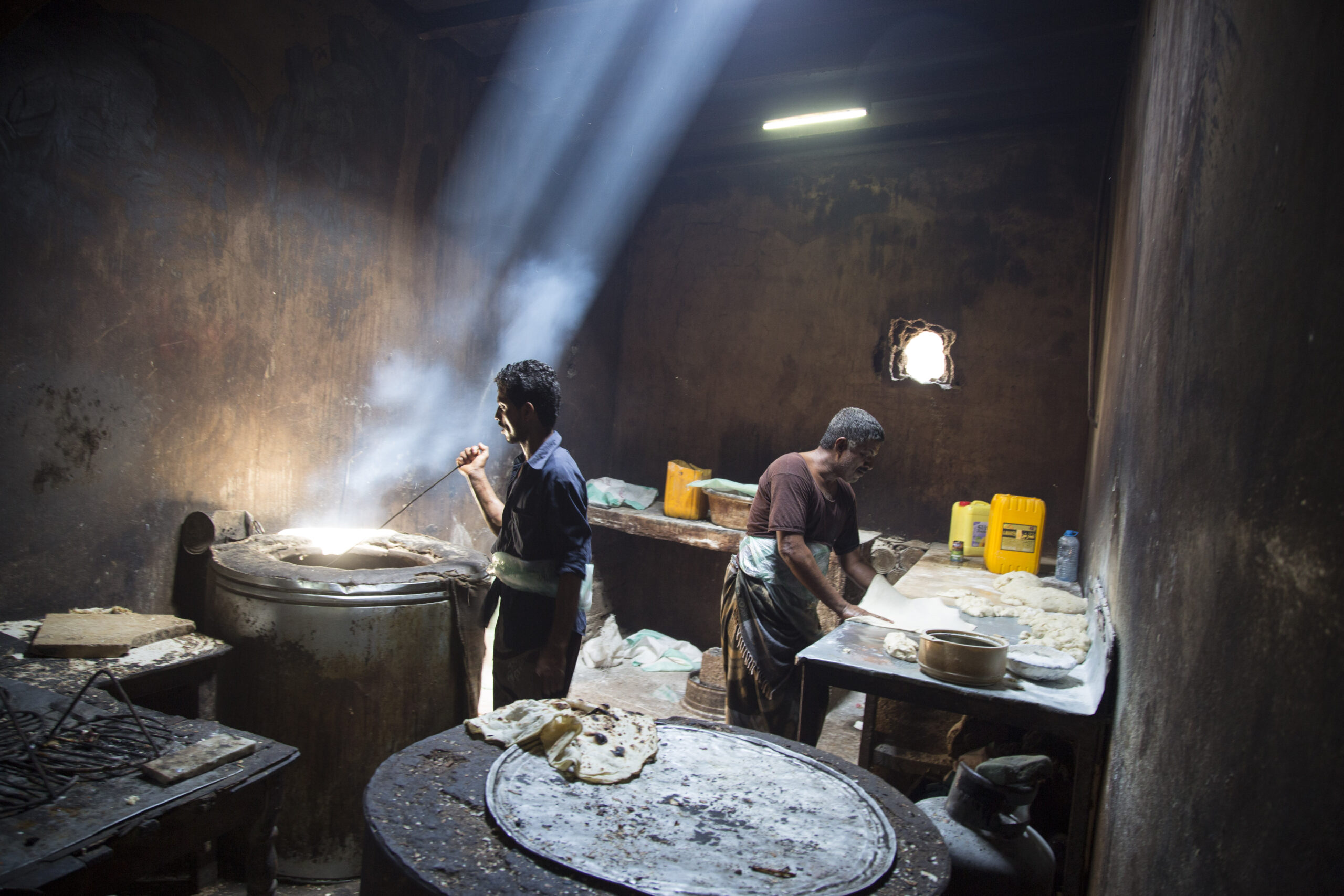 Bakers at a rest house on the highway along the west coast. Photo by Asmaa Waguih. 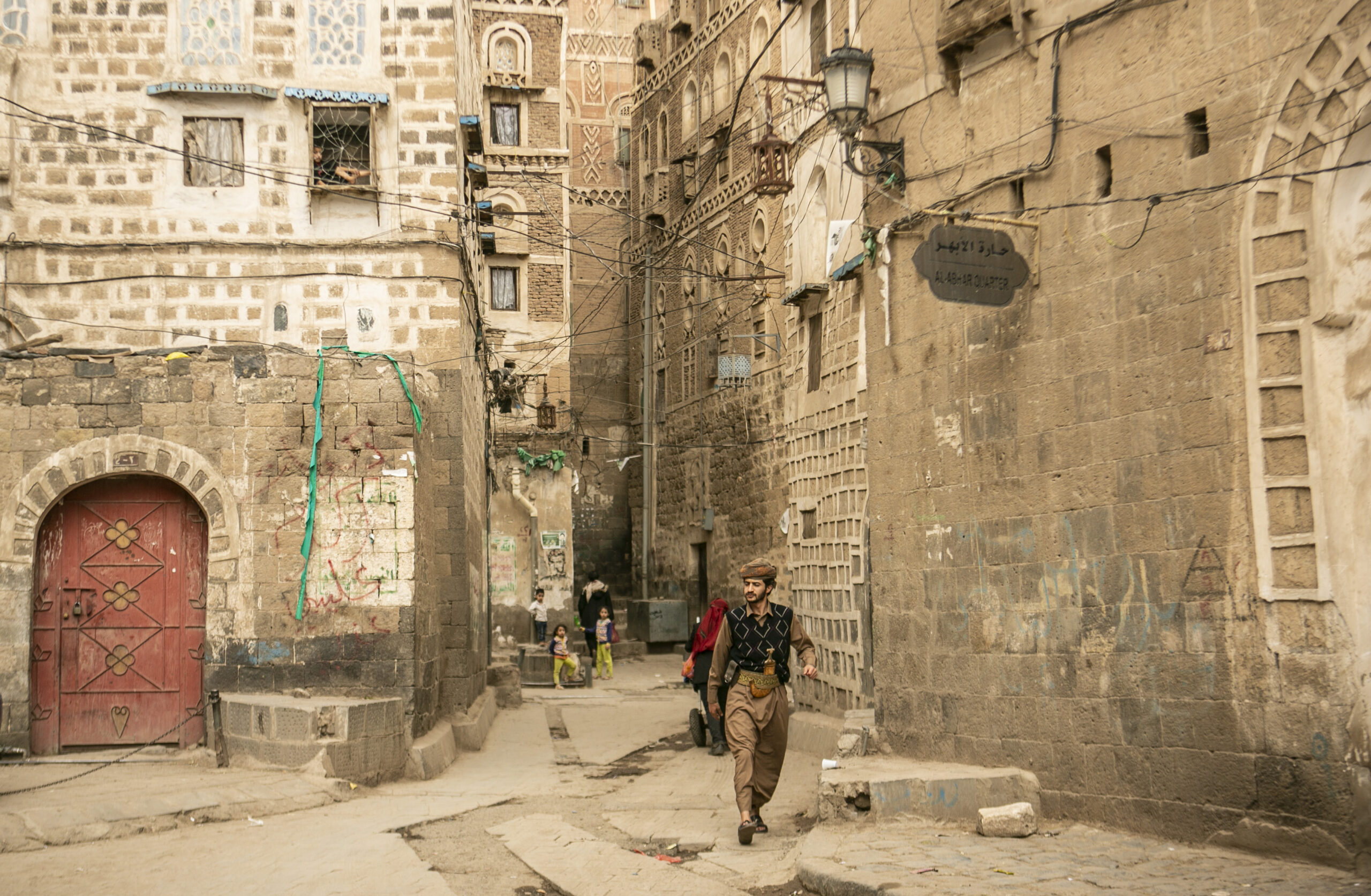 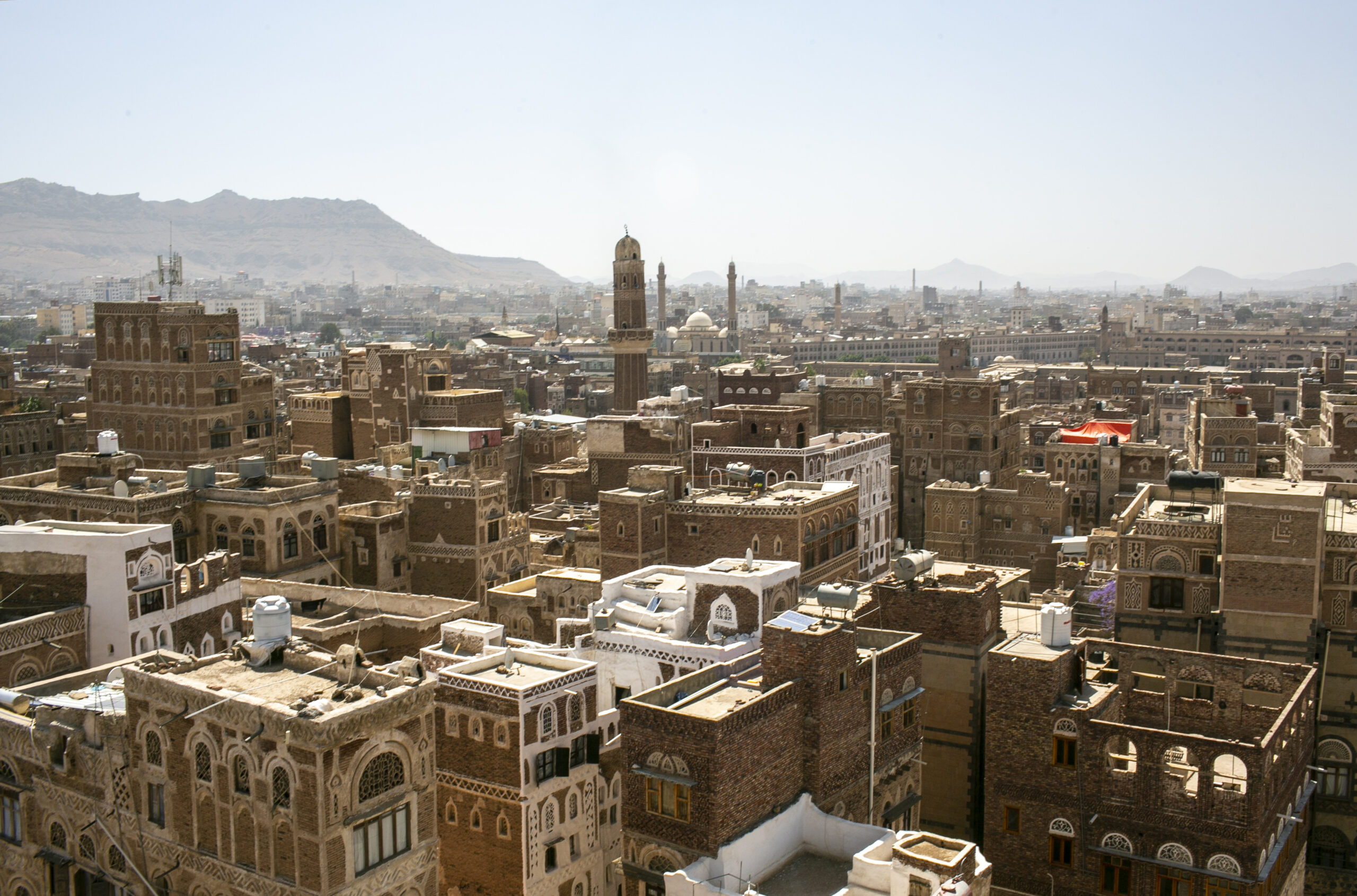 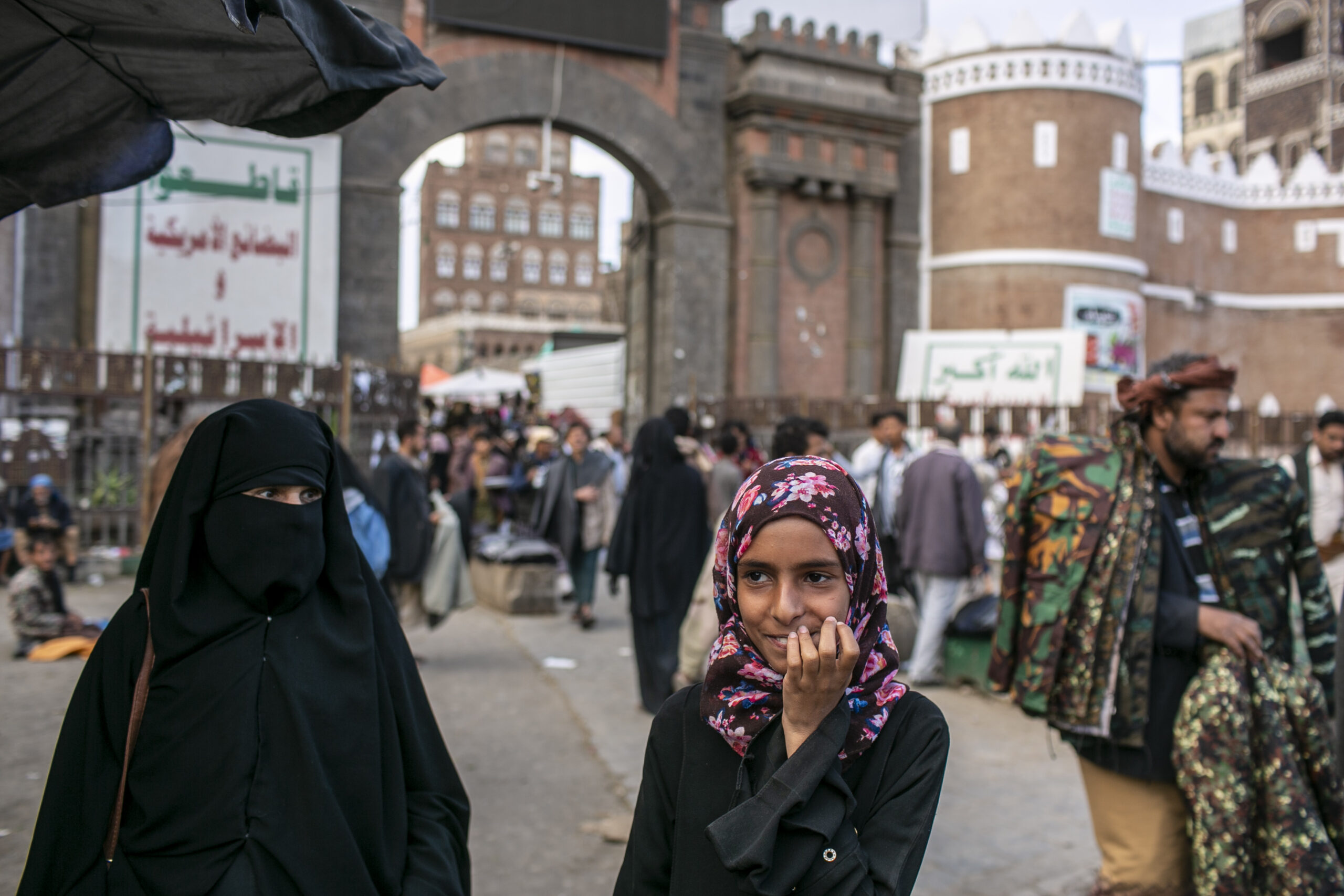 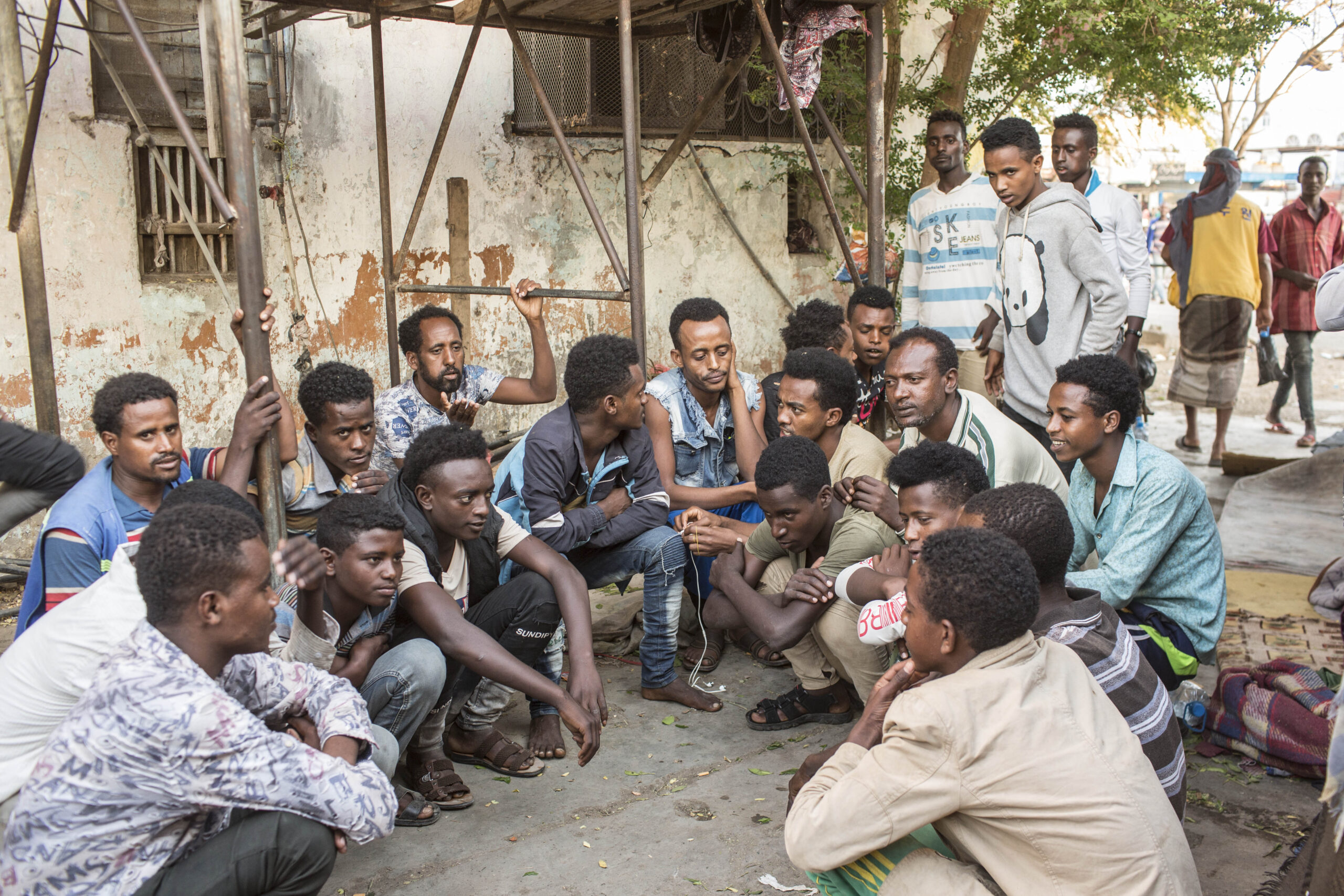 Ethiopian migrants rest at a corner near a main square in Aden. Photo by Asmaa Waguih. 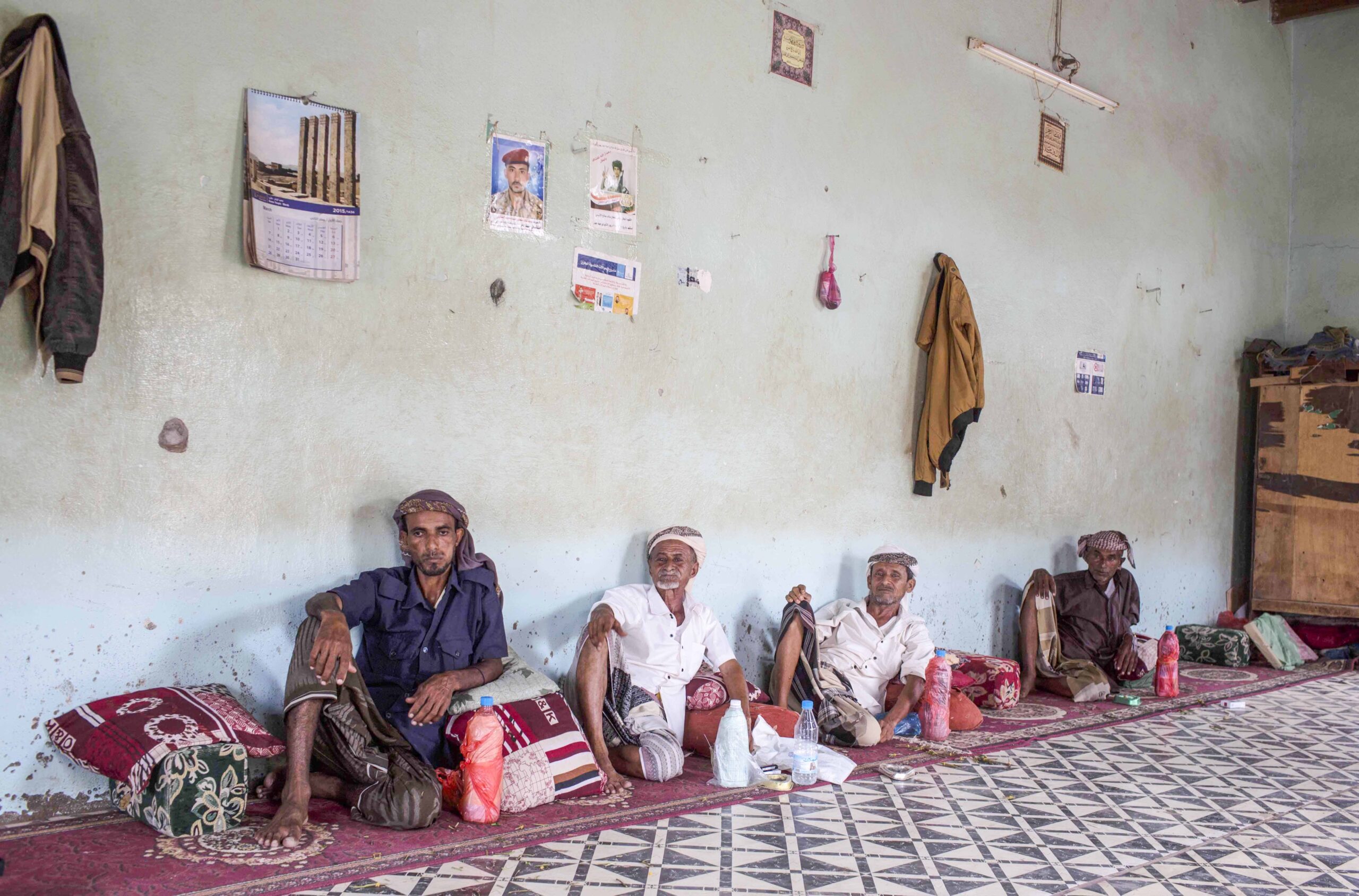 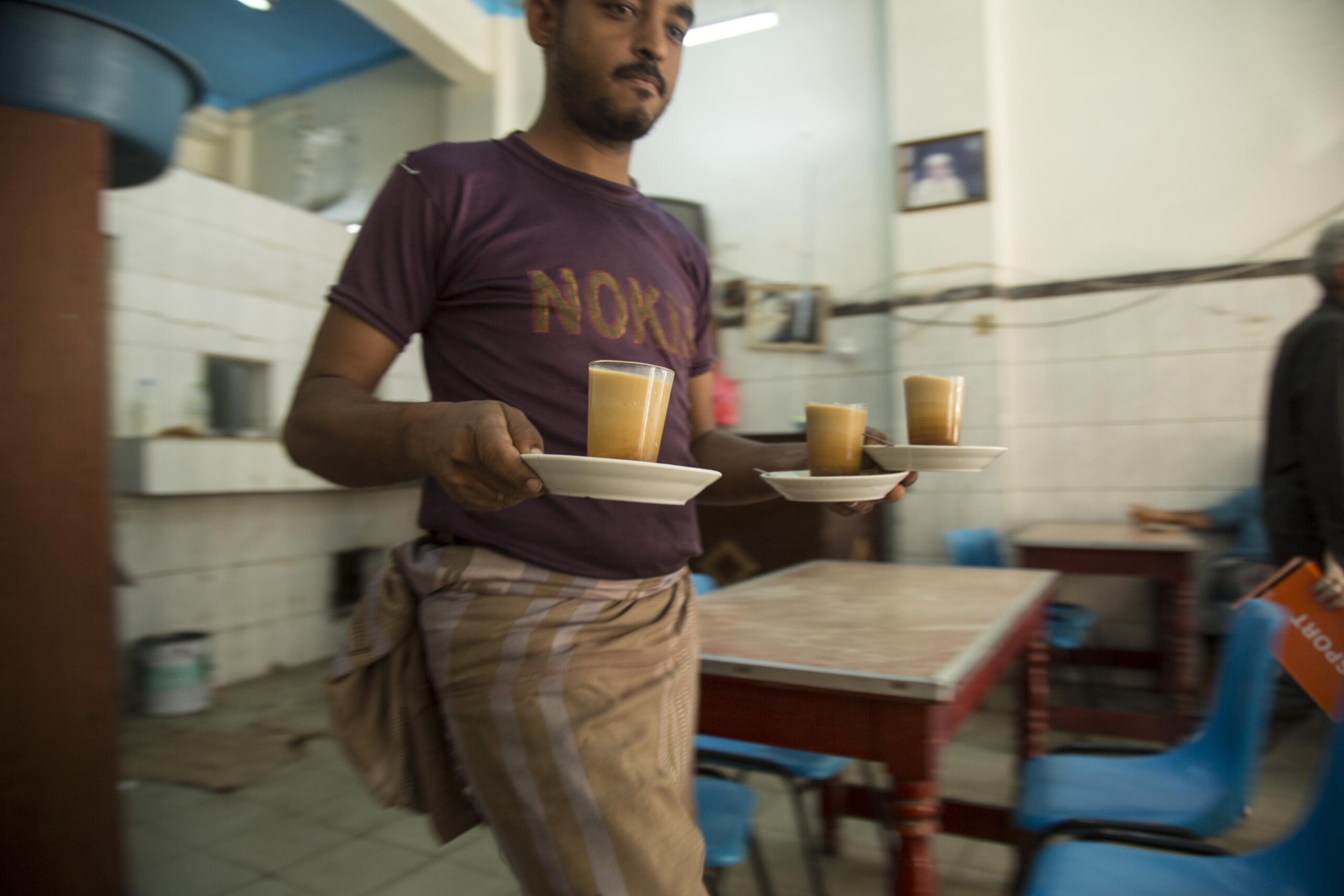 She wound her way through both Sunni-dominated government-controlled territories and Shiite-aligned Houthi controlled areas. She arrived in Seiyun, in Yemen’s government-controlled eastern region, on February 25. From Seiyun, she travelled 30 hours by road to Sanaa, Yemen’s traditional capital in the Houthi-controlled north, then to Mocha, where she visited a large camp for internally displaced people, and finally another day’s drive to the government’s entrepot capital, Aden.

Along the way she passed clusters of settlements across Yemen’s mountainous arid terrain, each distinguished by an array of hillside towers, archways, rainbow-colored windows, and earthen walls. Yemen is a landscape of small towns, villages, and a few larger cities, mainly along its coast. Roads across its desert expanses are often unpaved and remote. Waguih travelled in crowded, unreliable mini-buses.

Throughout her journey, she saw the impact of war and the fractured movement of civilians and goods. In much of the country, life carries on—fishermen cast their lines, bookstores sell their tomes, devotees go to mosque. But everything is under threat, anything that still works is fragile. And there are pockets of immense suffering.

Yemen is facing a humanitarian disaster. More than 377,000 deaths are attributed to the conflict, including 150,000 people who died as a direct result of military actions. Yemen’s people are starving. The United Nations is seeking $4.3 billion to stave off hunger and disease for an estimated 23 million people—nearly three-quarters of the population, including 2.2 million acutely malnourished children. Yemen imports nearly all its provisions; Ukraine and Russia supply 40 percent of its wheat. Food prices have risen approximately 150 percent since the invasion of Ukraine, according to the International Committee of the Red Cross.

In much of the country, life carries on—fishermen cast their lines, bookstores sell their tomes, devotees go to mosque. But everything is under threat, anything that still works is fragile.

Despite the staggering scale of the seven-year catastrophe, Western news media describes the conflict (when it describes it at all) as a “forgotten” or an “invisible war,” tropes used to justify Western neglect of complex intrastate or proxy conflicts, particularly in Africa and the Middle East.

So deep are divisions between the warring parties that each runs its own fiscal and administrative systems. Waguih had to carry two sets of Yemeni banknotes, or rials. Older and newer bills have different values, exacerbating runaway inflation.

In Yemen, women are rarely seen in public without a full abaya or burqa. The fact that Waguih is a journalist and an outsider afforded her more freedom than most Yemeni women enjoy. Even still, her movements were always negotiated. In Houthi areas evening trips to convenience stores and restaurants were accompanied by a Houthi agent.

Waguih visited Sanaa’s largest orphanage and hospital, a fuel station, a bank, and other businesses and institutions in the city’s UNESCO World Heritage-listed old city to gauge the war’s impact.

“Yemen is a place where it is very difficult to see actual conflict but impossible not to see its effects everywhere,” she said. “You will see, for example, a building that has been destroyed, and you don’t know how long it has been that way. Maybe it was recently. Maybe it was 10 or 20 years ago.”

There was no difference, she said, between the destruction she saw in government-controlled areas and that in Houthi areas. During her previous trips, she said, violence seemed to be localized around particular areas. Now, due to an estimated 25,000 air raids, Yemen’s ruined infrastructure is highly distributed.

And everywhere, Waguih said, from the streets in Sanaa to Yemen’s squalid camps for the internally displaced, she gazed upon the gaunt face of hunger.

There are some developments toward peace. The internationally-recognized government and the Houthis announced a two-month ceasefire in April, to coincide with the holy month of Ramadan. Many hope the truce will allow all sides to consider proposals for a permanent end to the war.

Nations at war are also nations at work, at school, at play, at rest—at all the places that make up daily life. War often occurs in places with vitality enough to sustain many years of degradation. Waguih’s photos show everyday reality in a nation experiencing one of the world’s longest running wars. The conflict may not be visible in every frame but it infuses all of the images.