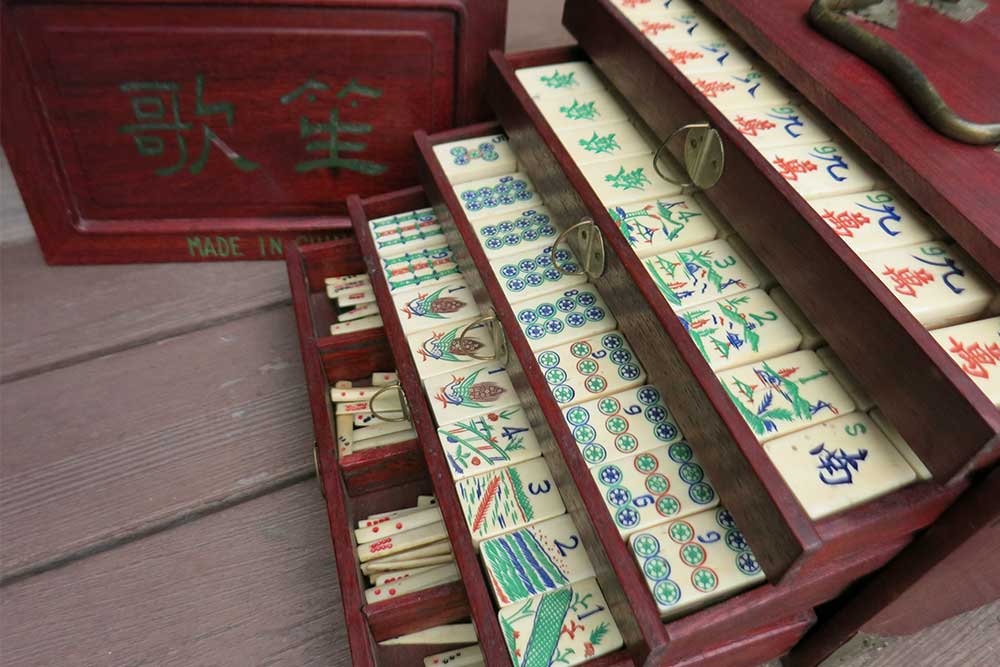 In the 1920s, mahjong sets often came in wooden boxes with pullout drawers and a sliding front cover. Most tiles were made of bone and bamboo. More desirable sets at the height of the fad were made in China, as advertised on the front cover of this box. Photo courtesy of Annelise Heinz.


The rumble of shuffling mahjong tiles filled the air in Chinatowns across the United States in the 1920s. Before even seeing the game, you could hear it being played in apartment buildings, association halls, and back rooms of general stores. You might assume that most Chinese Americans were already familiar with mahjong long before the colorful, complex tile game hooked the broader American public, but the opposite is true: Before the early 20th century, mahjong was not a widespread part of Chinese culture, particularly in the regions from which most immigrants to the U.S. hailed.

Many Chinese Americans began playing the game in the 1920s, swept up in an enormous international fad. But the game fast became a fixture in their communities—a versatile pastime that, through the sounds and the language of gameplay, and through its visual presence in public places and in private homes, helped create spaces for a new, shared Chinese American experience. 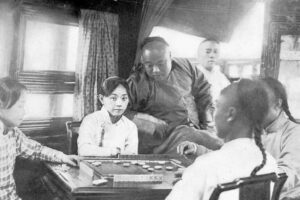 Courtesans and their clients play mahjong in Shanghai, likely on a river “flower boat” at the turn of the 20th century, when both mahjong and courtesan culture had become increasingly pervasive in the city. Image from R. Barz, Sketches of Present-Day Shanghai.

Mahjong first evolved as a gambling game in the area around Shanghai in the mid-to-late 1800s. By the turn of the century, it was played mostly by men for both high and low stakes in Shanghai’s courtesan halls, before it swept the Empress Dowager Cixi’s Beijing court in the last years of her reign. After World War I, mahjong became popular in Shanghai’s social clubs thanks to a rising class of Chinese intermediaries and the growing number of Americans who frequented these clubs. The rhythms of the game, its mix of luck and strategy, and the satisfaction of the tiles’ heft and feel propelled its spread. Mahjong tables were settings for forging friendships, building community, or demonstrating power moves of posturing and strategy. A number of these players—most famously a Standard Oil representative named Joseph Park Babcock who brought mahjong to California in 1922—marketed the game in the U.S., promoting it as an exciting and “exotic” new pastime. It took off like wildfire. Soon the most elite Americans, from President and First Lady Harding to Hollywood celebrities, were playing mahjong, as were throngs of fans in Europe, Japan, Australia, elsewhere in China, and beyond. It was never only a game for the wealthy, however, as players from across the social spectrum—and across lines of gender, race, and region—embraced the game.

Mahjong came to be known as “the national game of China,” both in China and abroad, in the context of the global fad, which advertised the game as an exclusive pastime of the ancient Chinese court. In Chinatowns, many people knew that wasn’t the case; if Chinese immigrants had heard of mahjong at all, they tended to associate it with women of ill repute. But, as its image changed in China and as American society adopted the game, respectable and relatively well-off merchant families began to welcome mahjong into their homes. As white Americans engaged with the game for its glamorous appeal, Chinese Americans began to consider mahjong as a tie to their heritage, even if it was not yet rooted in family traditions or homeland memories of most players.

When mahjong’s worldwide heyday came to an end at the close of the 1920s, people continued playing in Chinatowns, where communities were undergoing significant change. At the time, Chinese immigrants and second-generation Chinese Americans were finding a tenuous sort of acceptance in the United States as anti-Asian discourse shifted its focus to Japanese Americans and China was seen as an increasingly sympathetic and struggling nation. But Chinese Americans did not achieve equality. Seen as perpetual foreigners, they remained barred from most forms of employment and routes to upward mobility, even after many in the second generation earned high school diplomas and college degrees. Struggling during the Great Depression, Chinese American merchants sought to make money by attracting tourists to their neighborhoods. They erected commercial facades that featured now-iconic curving pagoda rooflines, bright colors, and neon “chop suey” signs—all designed to appeal to outsiders. 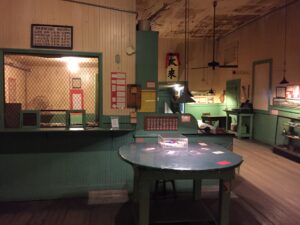 A gambling hall in Locke, a historic Chinatown in the Sacramento Delta, featured games of chance for a mostly male clientele. In a more social area in the back of the hall, a square table situated mahjong in a crossover space where mahjong could be played for high or low stakes.
Image courtesy of Annelise Heinz.

But behind their flashy exteriors, Chinatowns functioned as economic and cultural hubs that drew Chinese immigrants and Chinese Americans from surrounding regions. And within Chinatowns’ private and civic spaces—homes, shops, gambling halls, and association halls—mahjong helped Chinese Americans further community. For the men, mahjong games provided relaxation, fraternal bonding, or the addictive escapism of gambling. Women and younger people played mahjong too, in different places and different ways. Women played primarily in low-stakes gatherings, where mahjong provided a vital thread of connection. Because many older immigrant women retained traditional standards of respectability by staying indoors much of the time, many played mahjong with relatives or other women in shared home spaces. Women who worked in garment factories sometimes paused to play onsite after the machines stopped at the end of a long day. Meanwhile, Chinese American young people played the game with their friends in university Chinese student associations.

Mahjong became a rare intergenerational activity in Chinese American communities. Chinese American families of the time experienced a great deal of generational conflict, an outgrowth of the broader youth rebellions in America and China, and also the result of a demographic shift shaped by immigration policy. Among Chinese Americans, older Chinese-born residents had long outnumbered American-born young adults, but by 1920 the balance had flipped, because of exclusion laws that prevented most immigration from China (and later other Asian countries as well). Many of this American-born generation, especially 1920s young adults, felt pressured to choose between being Chinese or being American. Mahjong, however, could be both. It was generationally specific (the kind of activity shared with college friends) and at the same time, offered a bridge between generations (a game to play when visiting grandparents). During Chinese New Year, a time of homecoming when gambling is traditionally seen as bringing good luck, mahjong fit right in as a game that could be played among family members for very low stakes.

Mahjong defined cultural space when it crossed outside Chinatown boundaries, too. In her memoir Sweet Bamboo, the path-breaking Chinese American reporter Louise Leung Larson wrote of the time during the 1920s when her father—a successful Los Angeles herbalist—brought a mahjong set to a family outing on the beach. Louise was an avid mahjong player, but she recalled that she didn’t want to play that day because she realized the game highlighted her Chinese American otherness, reinforcing a sense of difference and exclusion. “We got stared at enough, without playing mahjong in public,” she later explained. Indeed, in 1923, the Chicago Tribune featured a story of “real Chinese actually playing Mahjong,” spotted outside of Chinatown.

Inside Chinatowns, though, the click of the tiles created a particularly resonant sense of a Chinese—and a Chinese American—space. When players shuffled the tiles, the clattering rumble could echo down alleyways. Walking along Chinatown’s sidewalks, one observer noted, a visitor could hear “mahjong pieces click crisply and the voluble conversation of the excited players” through open windows.

Chinese American communities have transformed since immigration reform in the mid-1960s ended the categorical exclusion of Asian immigrants. As the game has continued to evolve and change across Asia, fostering unique Filipino, Japanese, and Vietnamese mahjong cultures in addition to regional Chinese variations, Asian American mahjong cultures have deepened and diversified. Lunar New Year remains a time when families play together, and community centers host regular games among retirees. When the 2018 blockbuster film Crazy Rich Asians featured a pivotal mahjong scene, it helped reinvigorate a younger generation’s interest in the game and attached it once again to cosmopolitan glamor. A century after mahjong catapulted to global fame, its status as a game that could be both American and Chinese, and its unusual ability to bridge multiple kinds of social spaces across gender and generational divides, still serves a unique purpose in creating a larger sense of Chinese American—and now Asian American—ethnicity.