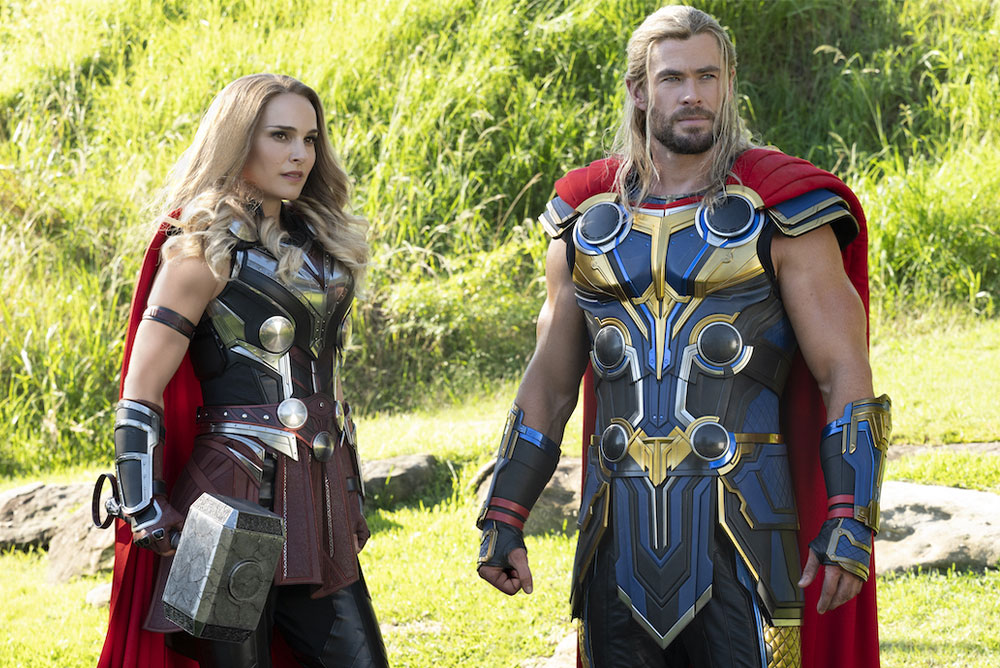 
In the upcoming Thor: Love and Thunder, the titular protagonist sets out on a journey of self-discovery, trying to give new meaning to a life spent fighting errant gods, space elves, and other pseudo-mythological villains. After “saving planet Earth for the 500th time,” as the trailer for the film puts it, what is there left to do for Thor? The answer, the trailer suggests, will partly be more of the same. Love and Thunder will again have Thor face off with a nefarious antagonist, tussle with other gods, and punch out many monsters and henchmen in the process. At the same time, Love and Thunder also appears to claim new territory for future Marvel movies. It introduces a new female Thor portrayed by Natalie Portman and presents Chris Hemsworth’s version of the character going through a superheroic mid-life crisis and trying to stake out an existence beyond the established routine.

Thor’s attempts to reinvent himself (but not too much) mirror the challenges faced by the entire superhero blockbuster genre—as well as the reason why these films, much like Thor’s red cape, are not going anywhere. Disney’s Marvel Cinematic Universe is a 28-film franchise that has brought figures such as Iron Man, Black Panther, and Black Widow to the cinema. But it’s only a fraction of the roughly 100 superhero films to come to American theaters (and, more recently, streaming services) since the year 2000, including multiple big-screen incarnations of comic book favorites such as Batman, Wonder Woman, and Spider-Man, as well as lesser-known characters such as Valiant Comics’ Bloodshot. All of them play variations on similar themes and motifs, pitting more-or-less virtuous, more-than-human heroes against evil counterparts that threaten the fragile status quo of a social order that is not necessarily ideal, but that will be defended nonetheless.

Superhero blockbusters generally try to provide a well-calibrated mix of familiar pleasures and innovative ideas. The formula puts known characters into situations that are similar to what came before, but, ideally, even more spectacular—a task that is becoming more and more difficult as new entries are added to the genre. Against this backdrop, Thor’s mid-life crisis can be understood as a self-reflexive joke about a looming exhaustion of creative options and the fear that there might not be all that much left that’s worth telling stories about (not coincidentally, the specter of “superhero fatigue” among audiences has haunted coverage of the genre for some time now).

Ultimately, it is this multifaceted and ongoing public discourse about superhero movies that creates much of the genre’s cultural visibility, and thereby lays the groundwork for the continued profitability of this type of film.

This challenge is not unique to the superhero blockbuster. Other film genres have faced it before—such as Westerns or “creature feature” horror movies, for example, both of which enjoyed significant popularity but eventually returned to the fringes of Hollywood production. Filmmaking trends like these are examples of an “aesthetics of seriality” that, as the semiotician and novelist Umberto Eco suggested, is more generally at work in modern mass media. Seriality here has a double meaning: On the one hand, it refers to cultural creators producing new material on the basis of established success formulas, stock scenarios, and character types, which are then invested with new meaning, combined with new ideas and interesting twists, or rearranged in unexpected ways. (Think the American Western being appropriated by Italian filmmakers like Sergio Leone, or Steven Spielberg’s Jaws inspiring Joe Dante’s horror comedy Piranha.) Eco understood trends, appropriations, and reinventions of this kind as the norm in commercial popular culture. These products, he wrote, would invariably be characterized by “a dialectic between order and novelty, … between scheme and innovation.” In other words, there’s nothing truly new under the sun (or multiple suns, as on Star Wars’ Tatooine—a setting that combines the Western’s frontier vibes with the desert planet aesthetics of Frank Herbert’s Dune, and thus presents itself as another example of Hollywood’s tendency to reuse and remix well-established ideas).

But seriality also refers to a mode of storytelling in which narrative information is doled out piece-by-piece and across multiple installments to engage audiences over extended periods of time. Disney’s Marvel Cinematic Universe and other contemporary superhero franchises embody this model of serial narration par excellence: A film like Love and Thunder, for example, might still have a relatively self-contained story at its core, but is clearly not meant to be watched outside of the larger context of the Marvel Cinematic Universe. Recent entries of the genre are furthermore riddled with in-jokes, callbacks, and other nods to earlier superhero properties and comic books—references which require more than a passing familiarity with the material to be understood.

The result can be a peculiar sense of narrative fragmentation—instances in which superhero blockbusters cease to tell self-contained and classically coherent stories altogether. In such moments, films appear to be constructed around conspicuous narrative gaps, as motivations for characters’ actions are implied rather than spelled out. In this year’s Doctor Strange in the Multiverse of Madness, for example, one character’s transformation from hero to villain only makes sense if one also has seen preceding Avengers films and the 2021 Disney+ streaming series WandaVision (and even then it remains pretty implausible). This type of serial storytelling makes good sense for Marvel and parent Disney, who can use it to point consumers from one arm of their multifaceted entertainment offerings to the next. In fact, the superhero blockbuster’s strong reliance on serial narration is arguably a key reason why the genre has not yet gone the way of the Western or the “creature feature.” At the same time, such interconnectedness can also make it difficult to follow along if one does not want to invest the time. But in our contemporary media environment—thanks to sites such as Wikipedia, chatter on social media, and the ceaseless coverage of the genre on entertainment news fan websites—the necessary background information is usually just a quick Google query away.

The existence of lively surrounding discourse is another important reason for superhero blockbuster cinema’s enduring success. After all, serial storytelling thrives on the temporal gaps between installments, which offer audiences (including fans and journalists on the popular culture beat) ample time and opportunity to celebrate or criticize recent releases, pitch hot takes about films’ broader significance, trace references to source materials, share news about the production of upcoming features, and speculate about future plot developments. Ultimately, it is this multifaceted and ongoing public discourse about superhero movies that creates much of the genre’s cultural visibility, and thereby lays the groundwork for the continued profitability of this type of film (after all, audiences need to know about a film before they can go see it).

Like our celestial universe, the superhero universe continues to find ways to expand—it has, by now, grown so large that some of its entries deliberately position themselves against the humor, playfulness, and fragmentation of recent Marvel fare. This year’s The Batman, for example, offered gritty violence, corrupt cops, and civil unrest along with a 176-minute runtime that left enough room to flesh out even minor aspects of the backstory in great detail. In this tradition, we can expect that superhero movies will, in the coming years, continue to play through all possible variations of the underlying hero-vs.-villain theme—and, in the process, continue to combine the well-worn cliché with the unexpected twist.

Will audiences eventually tire of this continued reinvention of the already known? So far, superhero movie fatigue has not yet left a significant dent in the genre’s overall commercial success; likewise, the public discourse about the genre shows little signs of souring. Like Thor, the superhero movie probably will overcome whatever obstacles stand in its way.