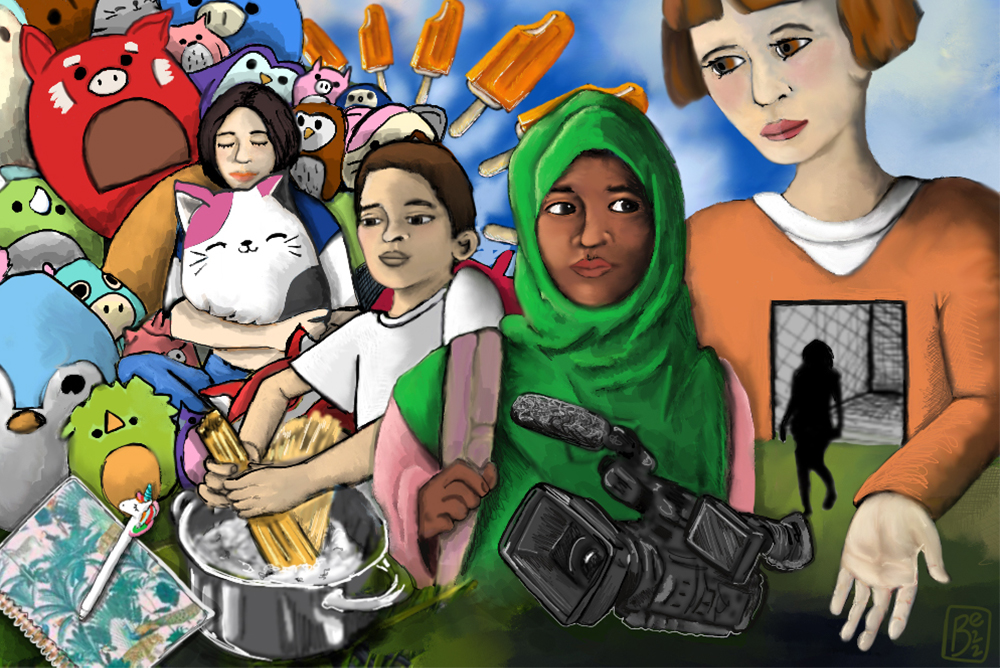 As the CDC warns of an accelerating mental health crisis among young people, Bree Barton wonders: If tweens and teens were given the chance to shape their own narratives, what would they say about their struggles? Illustration by Be Boggs.

This article is a co-publication of Zócalo Public Square and State of Mind, a partnership of Slate and Arizona State University focused on covering mental health.


My depression was triggered by The Lion King. Watching Scar throw Simba’s father to his death, I started crying and couldn’t stop. I was 11, terrified something would happen to my mom—my lifeline, and the parent who had removed us from an abusive situation six years earlier. That night, it felt like a dark room opened inside my chest, filled with feelings I couldn’t name.

The room stayed with me—sometimes growing larger, containing hopelessness and instances of self-harm, and sometimes emptying, only to fill up again with a new sense of despair. Ashamed of this endless loop, I struggled with how to integrate mental illness into my personal narrative.

Those feelings were the catalyst for my new children’s novel, Zia Erases the World, the story of an 11-year-old girl facing her first depression. Zia doesn’t know how to talk about her room of shadows, which she calls the Shadoom, and keeps her secret locked inside her. Upon discovering a magical dictionary that can erase whole concepts from existence, Zia erases fear, pain, and sadness. After the world unravels as a result, she has to make it right.

When I speak at schools around the country, I share two stories: Zia’s, and my own. I acknowledge that today’s students face realities I never imagined, from accelerating climate change to active shooter drills. In 2019 more than 1 in 3 high school students experienced persistent feelings of sadness or hopelessness, a 40 percent increase since 2009. That same year, 21 percent of American children reported having had a major depressive episode at some point.

In December 2021, US Surgeon General Vivek Murthy released a landmark advisory on the youth mental health crisis—which he called “alarming” before the pandemic and “devastating” after a year and a half of quarantines and isolation.

But if tweens and teens were given the chance to shape their own narratives, what would they say?

I decided to find out by speaking with them directly. Most of the young people I interviewed were strangers to me. But after more than a dozen interviews, I got to know Diemond, Camryn, Iona, Jaime, Wyatt, and Rayan, all of whom asked me to use their first names for this piece. “Depression feels like a bad dream,” said Diemond, a 19-year-old from New York. “The same dream over and over, and you can’t wake up.”

Camryn, an 18-year-old from Illinois, described depression as “a lot more than just feeling sad. It’s those ups and downs. Feeling empty and not having motivation to get out of bed, brush my hair, brush my teeth.”

Iona spoke to me outside their therapist’s office, two days before their 11th birthday. For them, the depression began as numbness. “When my dog got sick, I felt absolutely nothing. I couldn’t grieve or cry. That was tough. My dog passed away and I didn’t feel anything. It was just like if a snail died.”

I’m trying to embrace mental illness as a part of my narrative. And by naming my most private pain, my darkest secret, I hope to help young people feel the same way they’ve made me feel: less alone.

“I got worse,” Iona went on. “I started feeling again, and I wanted to hurt myself.” These desires “weren’t scary to me at the time—I just thought they were normal and this happened to everybody. Now that I’m better and taking medication, I realize those weren’t normal thoughts.”

As I conducted more interviews, I noticed that the young people who identified as female or non-binary spoke more about depression. Those who identified as male spoke more about anxiety. My sample size was admittedly small—according to the CDC, boys and girls report similar levels of anxiety. But the statistics do point to higher rates of depression, suicidal ideation, and attempted suicide among girls.

Jaime, a fifth grader from Los Angeles, told me by phone how he tries to stave off his anxiety attacks by focusing on something else. “But sometimes it feels like you’re delaying the feeling, and then it builds up like water boiling. You get that low heat and it starts to simmer, and then you notice it and think, ‘I’ve gotta turn down the heat.’ But at some point, you’ve just gotta throw in the pasta. You gotta let it boil. And then let it pass. Just try not to burn down the house.”

Despite the subject matter, these weren’t depressing conversations. One mom shared that her son came out of his room “looking a foot taller.” He told her, “It felt so good to talk about everything.”

That was the one resounding common thread in all the interviews: Talking helps. Young people don’t want to be forced to talk, but having even one person they feel safe opening up to makes a huge difference, whether it’s a teacher, therapist, parent, or friend.

For 13-year-old Wyatt, the anxiety and depression began in third grade. “My uncle, my grandma, my cousin, and my cat all died, which was pretty hard for me,” he said. Eventually, he tried counseling. It took a couple of counselors to find the right fit, but the second one gave Wyatt tools that helped him move through the grief. “In my house we had this little corner with soft blankets and squishy things. Me and my mom set it up. It felt like you were getting hugged by a whole bunch of penguins. We called it the ‘Cozy Corner.’ I could go lie down and burrow in for a couple minutes or a couple hours, close my eyes and relax.”

Unsurprisingly, the pandemic came up often, and many acknowledged a pervasive sense of loss. “I’m 11,” Jaime said. “Covid was 25 percent of my life. When things finally started to get better, my mom took me to Trader Joe’s, and I just walked around remembering half the products in the store. ‘Look at the Fig Newtons! Look at the mango popsicles!’ I was having the time of my life. Only later did I get sad. I realized what a big part of my childhood I missed.”

Rayan, a high school senior from Syracuse, used the time to be more creative. “I created my first ever documentary during the pandemic,” she told me. “It covered my daily routine, coming to the United States, the fears of being an outsider. I have so many things people hate. I’m Black, I’m Muslim, I’m female.”

When I asked Rayan about mental health, she said she doesn’t like to talk about her emotions. But watching her quiet, haunting documentary, it’s abundantly clear she has found other means of self-expression. “When I write, it’s kind of like I’m talking to my emotions,” she said. “If nobody is listening, at least my notebook will listen to me.”

As a writer, I believe in the power of artistic expression to heal, comfort, and connect. Shaping our own narratives can help us find light amid the shadows: something the tweens and teens I spoke to did with stunning clarity and courage.

As a child, I was fortunate to have adults in my life I could open up to. After The Lion King, I told my mom what I was feeling, and she immediately found a mental health professional to offer support. Even so, it took many years before I could find the right words for my experience. But as I speak more publicly about my depression in the wake of Zia Erases the World, it has put me on a path parallel to Zia’s. Inspired by the honesty of the children and young adults I’ve met, I’m trying to embrace mental illness as a part of my narrative. And by naming my most private pain, my darkest secret, I hope to help young people feel the same way they’ve made me feel: less alone.

At my last school visit, a fifth grader asked: “When did your Shadoom go away?”

The answer, much like depression itself, is complicated. It did go away, and it didn’t.

But what I told her—what I tell everyone I speak to—is that you are always adding tools to aid in your self-care. Therapy. Medication. Friends. Art. Music. Books. If you can name your own dark room, the people in your life can rise up to meet you. Mental health struggles become a means of connection, not isolation. And instead of erasing your story, you tell it as a way to survive.