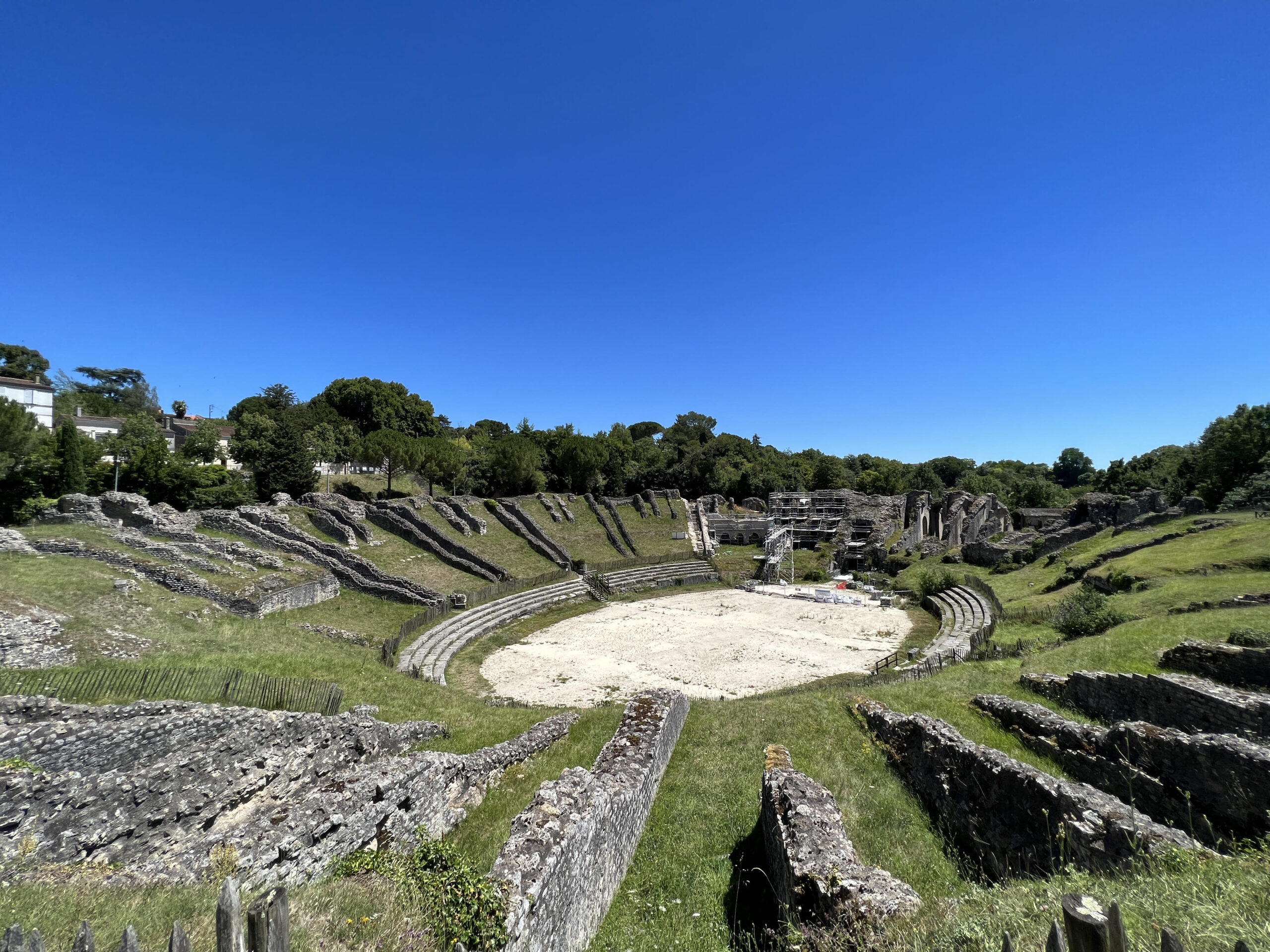 The Roman Amphitheater in Saintes, France, was built around the 1st century CE during the reign of Emperor Claudius. Photo courtesy of author.


More than 230 amphitheaters, among the largest and most memorable monuments left to us by the Romans, survive in cities from northern England to the banks of the Jordan River.  The Romans built amphitheaters for more than 500 years in a range of sizes—from a capacity of a few thousand to 50,000 in the Colosseum—using a variety of techniques. The amphitheater at Pompeii was built in the first century BCE by workers who excavated hillsides, placed terraced seating on the packed soil, and erected retaining walls to hold the rows of seats in place. The amphitheater in Bordeaux was built nearly 300 years later as a freestanding oval fashioned out of brick, concrete, and cut stone.

In every one of these diverse structures, the proximity of one’s seat to the arena floor corresponded to one’s social standing in the community. That method of letting status determine seating is having a rebirth today, and is more than just a symbol of an increasingly unequal society.

Back in Rome, inside the Colosseum for example, the emperor and empress had a box with its own entrance at the equivalent of the 50-yard line, across from the box where the most important priests and magistrates sat. Members of the Roman Senate sat in a section called the podium that abutted the boxes and enclosed the rest of the arena floor. Roman knights, the next most prestigious social group, took their places in the seats above the senators. Ordinary Roman citizens filled out a large middle section of seating that was subdivided into blocks reserved for soldiers, married men, and other distinct groups. Non-citizens sat in the upper deck. At the very top of the Colosseum stood shaded wooden bleachers used by women.

The spectators were intentionally segregated from higher- and lower-ranking people. Each person got a token indicating which of the 80 entryways they were to use. Senators walked through specific arcades to get to their seats, and they may even have accessed different toilets and drinking fountains. Other, smaller amphitheaters in the provinces forced the people sitting in the upper and lower sections to each use specially identified gates so that they could only take a stairway that led to the appropriate seating area.

Over a single generation, we have moved from sporting venues that encouraged interaction of all social and economic classes to Roman-style spaces that create rigid boundaries between spectators.

Despite these rigid divisions, the Roman amphitheater was also a place that spoke to the promise of social mobility. Imperial Rome was by no means as dynamic a society as postwar America, but it was a place where a man sitting in the senatorial seats on the podium had earned his status through the offices he held or the service he rendered to the state and its leader. The amphitheater view could seduce Romans to believe that, if they excelled in a stratified society, they or their descendants could one day sit closer to the arena floor.

This wasn’t a hollow promise. Gaius Julius Rufus paid for the construction of a large amphitheater in the city of Lyons in the first century AD. Rufus was the grandson of a man who received Roman citizenship from Julius Caesar and the great-grandson of Epotsoviridius, a Celt with a mellifluous and decidedly non-Roman name. In three generations, Gaius Julius Rufus’s family moved from not being able to attend games at all to sitting in the best seats of an amphitheater that bore his name.

In the United States, the earliest sports arenas didn’t follow this stratified Roman practice. In 1914, Yale University opened the Yale Bowl, the nation’s first fully enclosed football stadium and, at that time, the world’s largest sports venue.  All spectators entered (and still enter) the Yale Bowl through a series of gates at ground level, which lead to tunnels that direct people to the middle of the seating area. Those with field level seats on the 50-yard line and those at the top of the upper deck enter together and share a similar experience. For over a century, every seat in the vast stadium has been a bleacher seat with an unobstructed view of the field. In 1912, Yale’s President Arthur Twining Hadley claimed he was “glad that Yale, in spite of its classical traditions, prefers the good old word ‘bowl’… to the ‘coliseum’ of the Romans.”

American sports stadiums embraced this democratic ethos for much of the rest of the 20th century. The Rose Bowl, built in 1923, also used exterior gates that emptied into the middle of a vast seating area. New York’s Shea Stadium, San Diego’s Jack Murphy Stadium, and the other multipurpose concrete donuts built in the 1960s and early 1970s had multiple tiers of seats, but fans in different sections entered through the same gates, moved freely through the concourses, and bought the same terrible food. If, like me, you went to Mets games in the early 1980s, you also regularly moved from cheap seats in the upper deck to box seats near the field as the home team fell farther behind.

Our stadiums are no longer built this way. Someone with a luxury suite ticket to an L.A. Clippers game now uses a separate entrance from a fan with a general admission ticket. They then take an elevator to an entirely different part of the arena with its own concessions, restrooms, and concourses. No matter the score, it is unthinkable for a Clippers fan to move from the upper deck to a suite.

The situation is even more extreme at SoFi Stadium in Inglewood, site of the most recent Super Bowl. Like the Yale Bowl, SoFi is a 70,000-seat oval, but SoFi rigidly segregates its fans in the fashion of a Roman amphitheater. SoFi has 12 entry points. Eight are for general admission. The other four points are reserved for different grades of VIPs, who also enjoy their own reserved entrance gates and premium parking options.

Over a single generation, we have moved from sporting venues that encouraged interaction of all social and economic classes to Roman-style spaces that create rigid boundaries between spectators.

But Romans built stadiums in the same way they had constructed their society. Everyone in an amphitheater understood why they sat where they did. Their seat placement corresponded to their position in an explicitly and intensely stratified social hierarchy, with generally accepted rules determining people’s status.

In America, however, we now segregate groups of people watching the same event in the same building without determining whether that separation is consistent with the values around which we organize our public life.

Our failure to consider this question matters for two reasons. First, citizens in Oakland, Tampa, Washington, D.C., and Anaheim—where the socially stratified Honda Center sits across the parking lot from the mingling crowds of Angel Stadium—are now considering whether to spend public money on new stadiums. It is hard to imagine how taxpayers can justify paying for a structure that makes our society less cohesive and less democratic unless they also understand what offsetting social good such buildings advance.

Second, growing economic inequality may soon challenge Americans’ tolerance for the special access and privileges wealthy people receive when they attend a sporting event in a public building. If Americans can come to some sort of agreement about how we want to watch sports, we may again find a way to embrace the common principles that bind the people of a diverse country together.