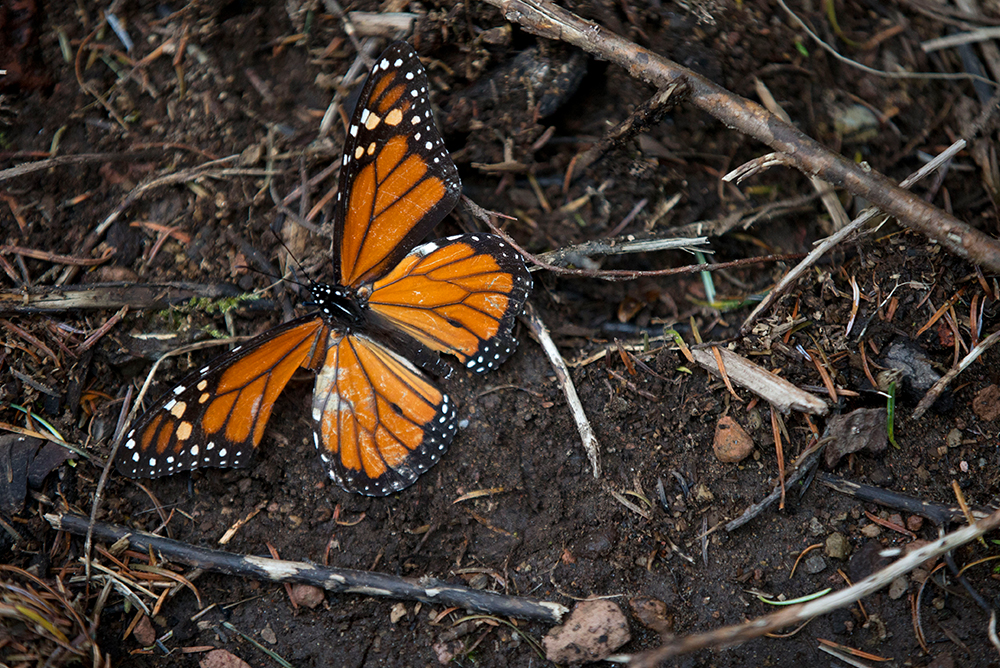 "If we want to keep monarchs around, we need to redesign North America as a safe place for migrant humans and migrant butterflies alike," writes Columba Gonzalez-Duarte. Courtesy of AP Images.


In July, the International Union for Conservation of Nature (IUCN) added the monarch butterfly, Danaus plexippus plexippus, to its Red List of Threatened Species, a recognition that the insect’s ongoing decline could lead to extinction. Though monarch numbers increased 35% from December 2020 to December 2021, their numbers overall have been in steep decline for the last three decades. As the IUCN listing indicates, now is a crucial time to reassess monarch conservation policies across North America.

As a woman born in Mexico and now living and teaching in Canada, I know that nothing is ever simple for anyone who makes their home across borders. I have conducted research throughout the United States, Mexico, and Canada, following the struggles of humans and insects migrating across North America. Both have been shaped in harmful ways by the erasure of Indigenous knowledge that supported populations of many species for millennia, and by the globalization policies, border security, and toxic agribusinesses that have transformed the landscapes of North America. Ecological justice for humans, monarchs, and other species will only come when we prioritize community livelihoods and ecological decision-making beyond borders.

Monarch habitat decline began during the 19th century, as settlers transformed the open prairies in what is now the Corn Belt of the U.S. and Canada. Monarch caterpillars eat only one thing: milkweed, which once grew in abundance in those landscapes. But settlers evicted Indigenous people, whose agricultural practices embraced biodiversity, and brought monoculture agriculture, planting single crops over vast areas and uprooting the milkweed.

In the modern era, one of the main culprits of the monarch’s decline was the agrochemical giant Monsanto, now part of the German corporation Bayer. The company’s Roundup herbicide decimated the butterfly by killing monarchs’ host plant. Its pesticides damaged caterpillar growth.

Monsanto was also a major producer of genetically modified (GM) corn seed, which has not only had devastating effects on monarchs, but also on Mexican rural livelihoods. Strains of corn traditionally grown in Mexico cannot compete genetically or economically with GM corn, which is more resistant to disease. Imports of GM corn from the U.S. made corn farming in Mexico less profitable, thus forcing workers to seek other crops or to migrate north—often risking their lives to cross a border that has become hostile political terrain.

Long before Mexico, the U.S., and Canada existed, monarchs made their annual migratory circuit, nourished by ample milkweed with help from indigenous agroforestry practices. Similarly, our own species has been in motion throughout its history, and this has contributed to our survival.

Insect and human migrations are also both affected by the effects of the North American Free Trade Agreement (NAFTA, updated as the USMCA). Though the agreement opened doors for trade in manufactured goods and produce, it closed them for human migrants and butterflies alike. The U.S.–Mexico border, once an interconnected habitat with lots of monarch food, became industrialized and fragmented, while traditional agricultural and land management practices across the continent declined. Despite these negative effects, NAFTA leaders appropriated the monarch as a symbol of tri-national trade relations.

The construction of the U.S.–Mexico border wall has further exacerbated these effects. Most directly, when the National Butterfly Center in Mission, Texas objected to a Trump administration attempt to extend its border wall through the conservation area, fringe groups baselessly accused the center of facilitating illegal immigration and human trafficking. The center shut down for several weeks after QAnon threats. It has since reopened, but with heightened security (the New York Times reported that the executive director now wears a sidearm), and it remains embroiled in lawsuits over the plans.

Ironically, conservation efforts can also have negative effects on monarch habitat, because they often disregard traditional agroforestry knowledge. Conservationists sometimes label small Mexican farmers as “loggers,” to cast them as villains stealing from protected forest areas. But the truth is more complicated. These forest farming communities care deeply for the butterfly. Their traditions hold that the monarchs return just in time for the Day of the Dead, carrying the souls of their ancestors. In these areas, the monarch’s winter home, people long practiced sustainable agroforestry. They grew mixed crops including corn at lower altitudes, while collecting other foods and hunting in mountain forests. As monarchs gained conservationists’ attention, however, vast areas were designated as “people-free cores” in an effort to protect the butterflies. These actions harmed human and insect alike by shutting down a system of coexistence—and pushed people to engage in logging, often to create space for avocado fields, which have become a tempting enterprise because of growing demand for the fruits in the U.S. since NAFTA. New conservation demarcations have diminished humans’ relationship to the forest and their ability to protect the butterflies.

It does not have to be this way. Long before Mexico, the U.S., and Canada existed, monarchs made their annual migratory circuit, nourished by ample milkweed with help from Indigenous agroforestry practices. Similarly, our own species has been in motion throughout its history, and this has contributed to our survival.

How do we reimagine North America as an abundant home for all? In the U.S. and Canada, “butterfly amateurs”—lay enthusiasts who create habitats to support monarchs—allowed me into their world. They fill their yards with milkweed and construct elaborate hatcheries in their homes. Some call themselves “crusaders.” Yet these backyard ecosystems are not enough.

Creating islands where monarchs have what they need is only a partial solution. Because a web of economic and political barriers has made it difficult for monarchs and humans, both species will need fundamental, structural change to thrive. The monarch is a metaphor for a right to live across “two homes,” as many migration activists assert. But this shouldn’t just be a metaphor—it should be our reality. If we want to keep monarchs around, we need to redesign North America as a safe place for migrant humans and migrant butterflies alike.