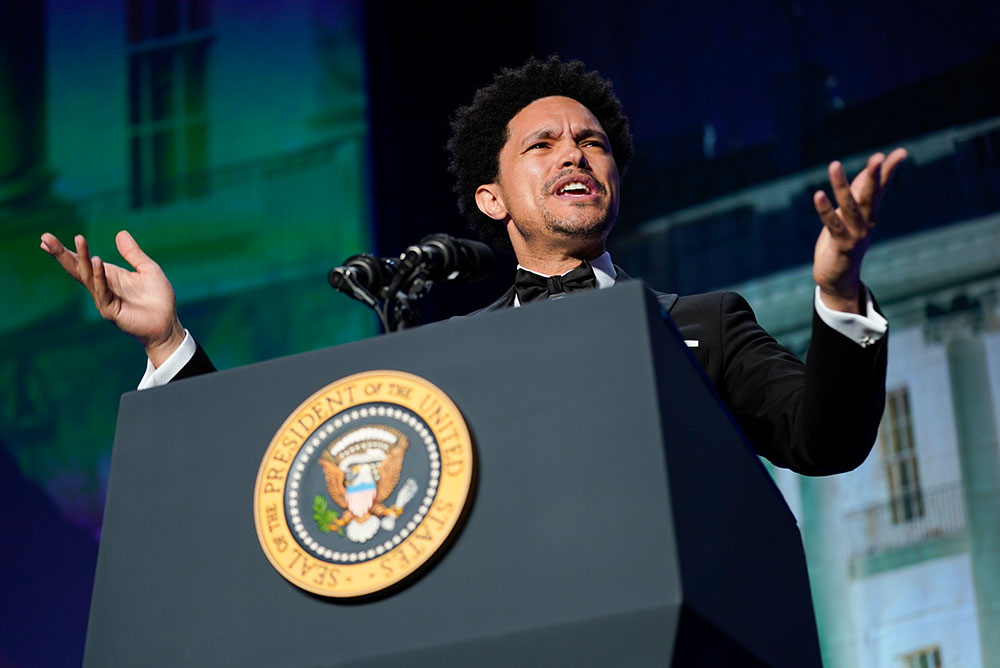 Trevor Noah's joke about President Biden's mangled withdrawal from Afghanistan at the 2022 White House Correspondents' Association dinner is one of the many pointed jabs that suggest how political comedy is finally evolving beyond "crypto-racist cringe," writes Ali M. Latifi. Courtesy of AP Images.


A joke can be the best way to present real-life issues. Comedians can poke fun at the absurdity of the human condition, even take on topics that feel taboo—like America’s brutal war in my home country of Afghanistan.

It took until I was in college, when Fahim Anwar’s “So, you’ve been invited to an Afghan wedding” dropped in 2007, to finally see an Afghan man who managed to do what other comedians were doing. Anwar, who was still working his day job as an aerospace engineer, racked up 500,000 views on YouTube for the “how-to” video, which quickly became a cult a hit among Afghan Americans. Finally, one of our own was talking about how ridiculous but endearing our practices and family expectations could be. It wasn’t heavy-handed, but rather put a humorous twist on the conversations we had with our cousins in our bedrooms, a safe distance from our parents.

But comedians like Anwar were outliers in a post 9/11 America. Mostly, we had to suffer through hackneyed, partisan pandering and racist jabs at Afghans, Arabs, and Muslims in general. Think of the Islamophobic jokes that Joan Rivers felt perfectly comfortable making about Palestinians, whom she infamously said “deserved” to die. Or her unfunny joke about there being “one outlet” in all of energy-poor Afghanistan. Plus Kathy Griffin’s dumb “the entire country of Kuwait smells like a fart” standup or her story of finding her “gay, even in Kandahar, Afghanistan.”

And then there is Bill Maher saying, “It’s that time of year again, April 15, taxes. I know it’s depressing, but just remember, you’re paying for roads, bridges, hospitals, and an army to keep the nation free. Unfortunately, that nation is Afghanistan.” He may have had a political point about the military industrial complex (a point he made in other comments following 9/11 that cost him his show). But the joke came off as smug and uncaring, considering his years of Islamophobic rhetoric. Not to mention the numerous reports of abuse, killings, and intimidation of Afghan civilians by U.S.-led forces.

As much as these comedians may have abhorred the likes of George W. Bush, Dick Cheney, and even Donald Trump, their comedy was not that far off from what those men and their supporters have been spouting since the early 2000s. The jokesters presumably voted Democrat, but their jokes recalled Trump’s “shithole countries” remark.

In recent years, some political comedy has evolved beyond crypto-racist cringe to address the hypocrisy of America’s “War on Terror,” signaling people’s fatigue and anger with it.

However, in recent years, some political comedy has evolved beyond crypto-racist cringe to address the hypocrisy of America’s “War on Terror,” signaling people’s fatigue and anger with it. A month before the one-year anniversary of the Taliban’s return to power in Afghanistan, for instance, the comedian Andrew Schulz opened his comedy special Infamous with a joke about the politics surrounding the war: “Be honest, is there anybody here who loves Joe Biden? We have any Taliban here?” Schulz managed to break down the result of 20 years of U.S.-led occupation in Afghanistan with a single punchline.

At this year’s White House Correspondents Dinner Trevor Noah told a similar joke: “No president in my memory has given more marginalized groups opportunities. I’m talking about women, the LGBTQ community, the Taliban—the list goes on and on.”

These jokes bring some pointed humor where usually there are rushes of anger and resentment at the botched occupation and withdrawal. The humor works because it manages to be both subtle and direct. It’s political, not pandering. And it trades on political realities, not tired punchlines about chadaris, “burqas,” or beards.

Those of us who lived through the 20-year U.S.-led occupation of Afghanistan know that it was President Biden who followed through with former President Donald Trump’s 2020 peace agreement with the Taliban. We also know that Biden’s poorly thought-out withdrawal from Afghanistan cost the lives of many Afghans, some trying to flee by clinging to the wheels of departing U.S. military jets days after the Taliban returned to power. Immediately after the Taliban retook the country, Biden instated sanctions, withheld Afghan assets, and cut back on aid, all of which was quickly followed by other Western countries and international organizations. This left the Afghan people unemployed, without money, and hungry just as a government accused of massive human rights abuses had taken control of the country.

That’s the kind of hypocrisy that hurts.

I appeared on a podcast produced by former Obama White House staffers shortly after the Taliban takeover, where I said: “Biden, in a lot of ways, has turned out to be a thousand times worse than Trump.” I stand by those words. For Afghans, Trump’s honesty about hating us lacked the hypocrisy of Biden pretending he ever cared. Especially since he called one of the most beautiful provinces of Afghanistan “hell on Earth” and reportedly told former President Hamid Karzai that Pakistan, whom Afghans have long accused of aiding and abetting the Taliban, is “50 times more important than Afghanistan for the United States.”

My comment led to an online backlash from Democratic Party loyalists, who refused to criticize the 79-year-old politician’s policy on sanctions. My point instantly became lost to entrenched partisanship. Smart comedy, which is becoming more common, is moving in the direction of deriding the rigid partisanship in America and getting to the root of important issues.

In Kabul, where I’ve lived since 2013, we spent years watching sketch comedy shows like Shabak-e Khanda, a popular program that pulled no punches in its criticism of corrupt, self-serving Western-backed politicians and the hypocrisies and double standards of Afghan culture. Now, many of these comedians have left the country in fear of the Taliban. With their programs off the air, we’ve had to rely on our own family, friends, and social media for comedy. When the Taliban’s prime minister, Mullah Hasan Akhund, asked “Chi shai ghwari?” (“What do you want?”) during an Eid-day address at the palace in Kabul, we mockingly quoted in a multitude of crude punchlines about everything wrong with the Taliban’s Islamic Emirate, presenting pressing real-life issues, some literal—we want jobs, we want our teenage daughters back in school—and others cruder and mocking—“You want to know what we want? We’ll show you what we want!” (among other things that can’t be printed in case the Islamic Emirate reads this). As always, each impression and response is a reminder that Afghans have not lost their sense of humor, and that jokes cuts through the most difficult and twisted of times—and is the steadiest hand to the truth.