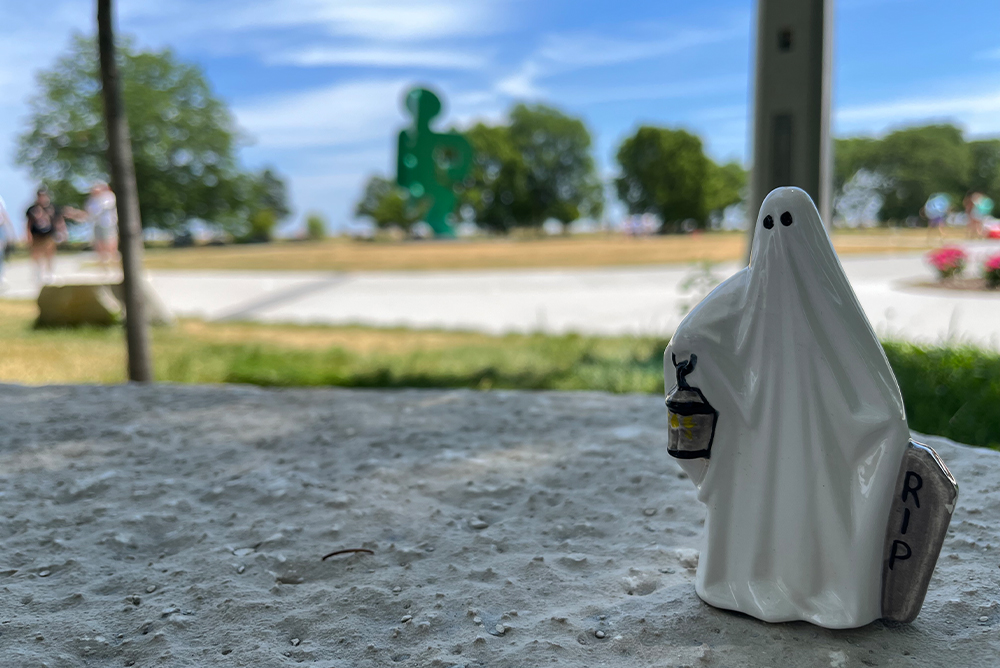 
We think the ghosts will come to us as we sit in Kaitlyn’s car, once our car, on top of the man-made hill that houses the only mausoleum in Woodlawn Cemetery. Small blue orbs dot the landscape. Ghost hunting shows often cite orbs as a sign of a haunting. But these are just battery-operated lamps that families have left next to their dead’s gravestones.

We figure this spot under the tree is a good place to hide from the few cars that might drive by in the night, going from Urbana to Champaign or vice versa. I turn the ignition off.

“Now what?” Kaitlyn sighs. Our ghost hunting inexperience is evident.

Three months ago, I had stood in our kitchen, now my kitchen, and said: I’m gay. At first, I had said I would find a new place because she had loved the garden in the backyard. But she wanted to go because she didn’t want to be in a house haunted by our former togetherness.

Over the remains of our marriage, we both wanted to create a celebration for our new friendship and a new tradition—one last ours. Inspired by the then-new show “Ghost Hunters,” we’d search out ghosts on Halloween, our shared favorite holiday. We decided to call it Wake the Dead.

Fog from the cold creeps up the windows. Silhouettes of the tree’s branches knock against the back window.

“What was that?” Kaitlyn whispers

“What was what?” I look around, afraid. The idea of seeing a ghost seemed fun, the increasing possibility as we sit in the dark cemetery, not so much.

“Thought I saw something moving across that way.” She points towards a row of graves.

I don’t see anything. Still, as the cold bleeds in through the vents, making everything feel even creepier, a thought whispers to me that we shouldn’t be there.

She nods. I drive as fast as I can on the twisty cemetery road in the dark. We go back to my apartment to eat pizza and watch a comedy. We laugh hard at anything slightly funny. 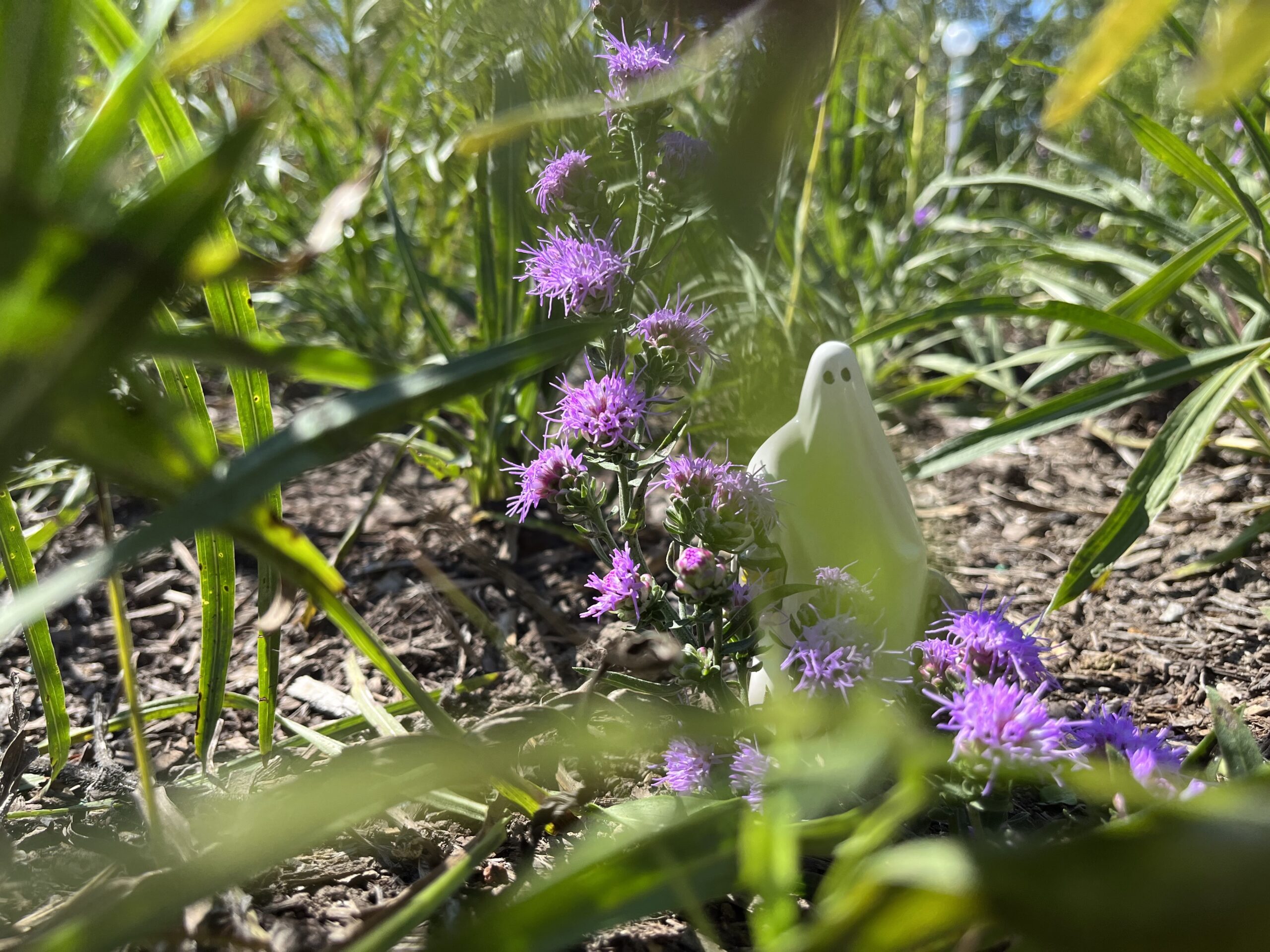 The author’s ceramic figurine in Chicago’s AIDS Garden—a place he believes is crowded with gay ghosts or ‘lavender apparitions.’ Courtesy of author.

Maybe we didn’t see anything because ghosts don’t hang out in cemeteries. According to Shane McClelland, co-founder of the Stonewall Columbus Ghost Hunters, they tend to return to places they associate with happiness or a place where they experienced trauma.

I started watching Stonewall Columbus Ghost Hunters in April 2022, while researching my memoir about my relationship to ghosts. Like my queerness, ghosts have always been with me, even when I didn’t want to acknowledge them. I started to notice my father’s ghost standing behind me three years ago when I remembered that he had molested me. Those memories brought on PTSD, major depression, and generalized anxiety disorder. I stopped showering. I slept with the lights on. No matter where I went or what I did, he was there, his hand hovering above my left shoulder.

But just as ghosts can haunt places of pleasure or trauma, that “you are not alone” feeling can be scary or be a comfort. Like I once accepted being queer, I eventually accepted being haunted. My once-casual interest in ghosts has become a full-fledged fascination. Now, instead of fearing being haunted, I devote much of my free time to seeking queer ghosts and writing haunted memoir, a term I coined, about the lived experience of being haunted. Ghosts have led me to a community of others also welcoming ghosts into their lives.

I’ve found that queerness and ghosts go together in fundamental ways. For one, our lack of queer history is a haunting. Rather than camera-ready scares, the hunts on “Queer Ghost Hunters” are a vehicle for finding and sharing queer history. By seeking out our ghosts and telling their stories, we defy erasure.

But in “Queer Ghost Hunters”, the Stonewall Columbus Ghost Hunters focus their searches on places of trauma, like prisons and abandoned asylums. They don’t go anywhere the queer ghosts might have had fun. If we are to memorialize places of queer trauma—and I believe we should—we also need to memorialize places of queer joy. For me, the power of queer ghost hunting lies in the way that it offers a means to acknowledge the co-existence of loss and celebration in queer, haunted spaces.

AIDS Garden Chicago balances this coexistence. Built on the ruins of what used to be a cruising and queer gathering spot known as Belmont Rocks in one of the city’s gay-friendly northern neighborhoods, the garden’s site memorializes a joyful part of Chicago’s queer history. Chicago Reader described Belmont Rocks as “the rare spot where the queer community could mix and mingle in broad daylight all summer long” and “nothing short of a gay paradise.”

Opened this year, the AIDS Garden’s centerpiece is a 30-foot, green Keith Haring sculpture titled Self-Portrait. Its defiant, joyful figure has its left leg and arm raised, as if photographed mid step. The park that circles the sculpture has concrete walking paths, benches, and pink and orange flowers. Through QR codes, visitors can scan to hear a still-growing collection of stories from those who lived through the crisis years in Chicago, as well as stories about those who didn’t make it. Because not a lot of storytelling exists about the Midwest during the height of the AIDS epidemic, the park is vital in making space to witness queer history and lives. 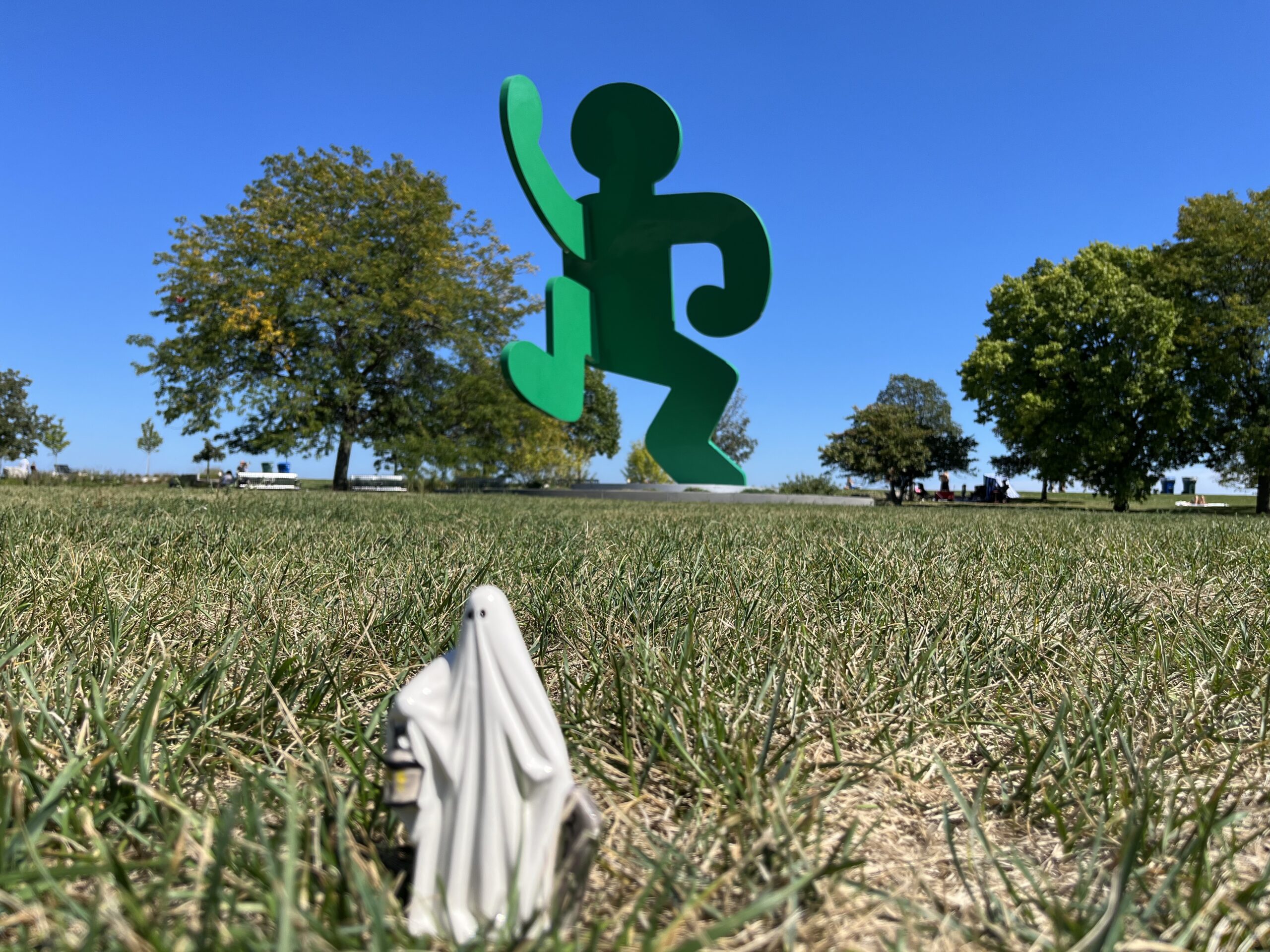 The author’s ceramic ghost stands in front of a 30-foot Keith Haring sculpture at AIDS Garden Chicago. Coutesy of author.

On the day I visit, the garden is busy: Cinnamon fills the air from the churros being made by the nearby food stand; closer to the lake, the air smells of sweat and sunscreen. People picnic under the shade of the trees surrounding the garden, while others hurry by to get a spot on the grass close to the lake. Some sunbathe on the concrete lip between the garden and the lakefront walkways just like in the historical pictures of Belmont Rocks. All of it feels like a way of honoring the space—laughing, taking in the sun, being with friends by the lake, just like the ghosts who haunt this space did when they were alive. It is a communal space for the living and the dead where the feeling that you are not alone is a comfort.

I’ve brought my own ghost to the garden, a ceramic figurine. I lie on my stomach on the crisp summer grass right in front of the sculpture to get a picture of the two together. The garden, I imagine, must be crowded with gay ghosts—or “lavender apparitions,” this more delightful descriptor courtesy of the podcast History Is Gay’s Halloween episode featuring the Queer Ghost Hunters. Just as ghosts are evidence of history, lavender apparitions prove queer people have always existed—even when we didn’t have language for queerness, even when some try to make us vanish.

Wake the Dead was a one-time event. Kaitlyn started her own tradition the next year: a Halloween costume party. Eventually, we phased out of each other’s lives, and I moved out of central Illinois to find my new home in Chicago, a city that provides space for queer history, celebration. Here, through searching out queer ghosts, I’ve reclaimed the ghost for myself just as I have the feeling of being haunted—two things the frightened version of me hiding from ghosts in that car in Urbana-Champaign would not have thought possible.

My new home is also walking distance to a local gay beach on Lake Michigan. I walk along the sand-covered concrete ridge that separates the beach from the preserved prairie dunes, the tall yellow-green marram grass stretching out towards the dark gray-blue water, towards the lighthouse with the rainbow base, on one of the first warm days. The dunes are themselves an unofficial cemetery of those lost to settler genocide. As I sit on the beach, the Chicago wind picks up, and sand swirls in the wind as if it’s dancing. I try to record it on my phone, to document what feels magical. I know I won’t capture it, but that’s OK. I let myself enjoy this lavender apparition, enjoying movement after being frozen for the winter. A gay ghost, as in a happy one.