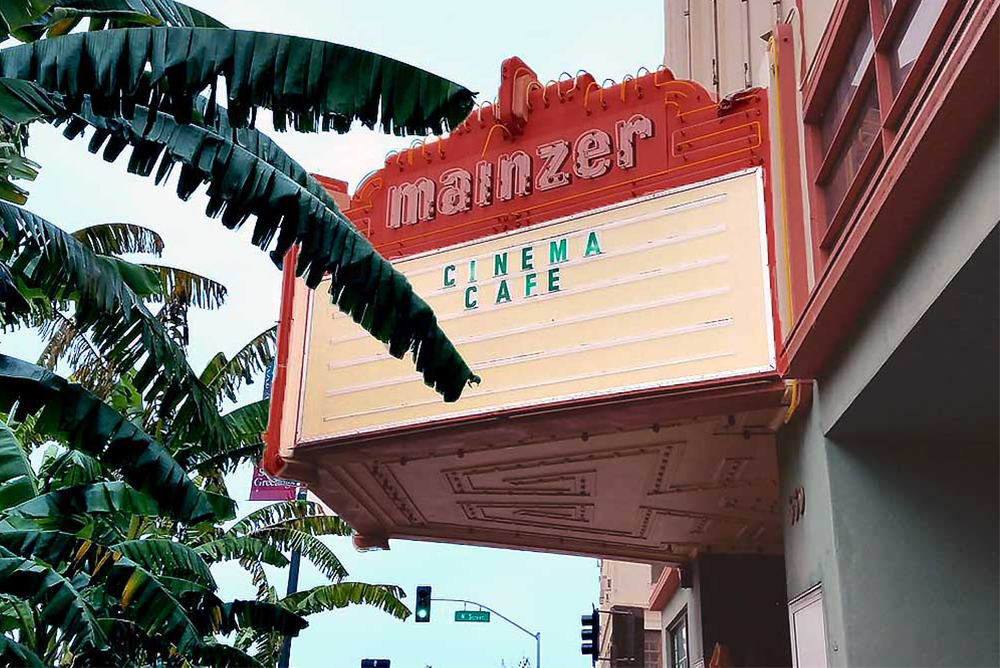 Merced is a place for dreams and new beginnings. At least that’s how it was advertised to me when I moved there from the Bay Area to attend college at the University of California’s newest outpost, a campus intended to serve the Central Valley and invigorate the local economy. If the pursuit of an education brought me there, places like the Cinema Café—a restaurant nestled into the historic Mainzer Theater building—were what made me feel at home.

The café closed just before the pandemic, a victim of Merced’s own success. Ever since, it has been a specter—a ghost of the Merced I had known and a reminder of progress’s voracious appetite.

I didn’t have any expectations the first time I visited the eatery, for a Saturday brunch, after I moved off campus in 2016. But as my friends and I walked up to it, I was instantly charmed. It was a light-green building with art-deco features, trimmed in rusty red and faded gold. Green letters on the marquee announced the headlining act: CINEMA CAFÉ. What served as the entrance when the movie theater first opened in the 1920s was now a cozy patio space, shadowed by the marquee itself. Orange Tropicanna lilies and lush banana trees lined the sidewalk, a little paradise in the concrete grays of downtown. 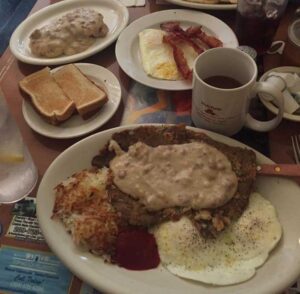 The first meal Anh had at the café. Courtesy of author.

I remember my first meal fondly: chicken-fried steak, eggs over easy, hash browns (extra crispy), and coffee. And a spoonful of that house-made salsa—so bright orange, and so redolent of savory garlic and chilis that I had to try it. You could just taste the care and effort that went into it.

Each meal at the café brought me closer to Merced’s history and community. The Cinema Café’s owner, Gerardo Olvera, was an immigrant and transplant like myself. He moved from Guanajuato, Mexico, to Los Angeles in the mid-1970s and got his start as a dishwasher at the now-shuttered Butterfields on the Sunset Strip, working his way up to chef (he impressed the restaurant owners so much that they paid for his cooking school tuition). After living in L.A. for many years, Gerardo and his wife Joy moved to the Central Valley to be closer to her mother. As they passed through Merced, Olvera noticed the Mainzer building,and commented, Wouldn’t it be nice if it was for sale? Later that day, Joy made some calls and surprised her husband with the news that indeed, it was. The couple took the plunge and started their new business in Merced.

“It was scary at first because no one knew me in Merced,” Olvera said, regarding the early days of the café in the late 1990s, “but once I started cooking and people tasted the food, it soon became busy.”

At the time, Merced was a quiet town, and construction for UC Merced hadn’t even broken ground yet. Merced’s low cost of living offered more spending power for families to establish livelihoods and settle down, and its small community meant neighbors knew neighbors and businesses were owned by the same friendly, recognizable faces you’d bump into at the grocery store. The café reflected this community-centered approach, operating from 6 a.m. to 2 p.m., seven days a week. It became a watering hole for anyone looking for a filling meal, especially those who worked downtown or were passing through Merced, as no other eatery downtown was open as early or even all week, save for fast food. Once construction began on the newest campus in the University of California system, the development sparked excitement and concern among locals: some embraced the UC as a boost needed to rejuvenate the local economy after the Castle Air Force Base closed in 1995; others feared the presence of a UC would skyrocket housing and cost of living. One thing was certain: the Merced around the Cinema Café was changing. But the beloved eatery stayed the course, continuing to offer a space where all members of the community, including this new and growing university crowd, could gather over pancakes.

To me, the Cinema Café was the very heart of downtown Merced. And then, one day, it was gone.

When I arrived in town as a student some 14 years after the Olveras, there was always a line to get in, and I was always happy to wait. Sitting down at the café felt like sitting down at someone’s kitchen table. The chefs razzed each other, and the waitstaff spoke to you with caring familiarity, with “here you go, mija” and “careful it’s hot, sweetie!” It felt like you could meet the whole town if you ate there. I dined next to university professors, office workers in slick suits, church ladies with fine pearls, construction workers in heavy boots, classmates in various stages of exam panic, and everyone in between. I met people’s families, friends, and pets. Specials were inspired by local landmarks (the El Capitan Omelet, for example, was filled with greens to fuel and nourish hikers on their way to Yosemite). A local artist who frequented the café even drew a tableau of the waitstaff and cooks; Gerardo loved it so much he made it the front of the menu.

To me, the Cinema Café was the very heart of downtown Merced. And then, one day, it was gone—on January 8th, 2019, the Olveras posted on Facebook that the café’s last date of service was just weeks away. A developer had plans to renovate the historic theater building, and the restaurant wasn’t part of the vision. With its growing population and newfound interest, investors were flocking to Merced, seeking to “improve” it and make it a “real” city.  The same appetite to grow and develop that had attracted me to Merced in the first place had now swallowed the café whole.

Initially there had been hope, Olvera told me, and he thought that the new owner might help the café relocate. But eventually he learned that “it wasn’t in their budget.” (I reached out to the current Mainzer business to learn more, but they declined to comment.)

“Nothing came of it,” Olvera said, when he contacted the city council for assistance. Today, a combination eatery/bar/theater taking the historic building’s name, Mainzer, stands in place of the café—a Hyatt Hotels venture. The building has been painted a crisp white, the banana trees have been replaced by manicured potted plants, and though there’s a Mainzer sauce on offering, it’s not the café’s salsa.

A popular slogan for Merced nowadays is “city on the rise.” Thinking about the Cinema Café makes me think about which communities are lifted with the growth and which are left behind. In a downtown where homey small-business establishments are increasingly replaced by trendy, upscale brands, what chance does a mom-and-pop joint like the Cinema Café really have? I worry about my other favorite local places that make Merced feel like home. Which will survive in the years to come?

It’s been more than three years since the Cinema Café closed its doors. I’ve referred to it as a specter, but maybe I’m the one who haunts it. I still return regularly to the café’s last post on its Facebook page to mourn, to remember, to hope for a sign it will come back to life. I know what I’m really hoping for is that the older, familiar Merced that grew out of its ethos will prevail.

These days, it’s always jarring when I find myself wandering downtown and end up at that familiar corner of N and Main. Looking up at the blinding marquee lights, I can still make out a glimpse of a young Gerardo and Joy Olvera, who saw an opportunity in an old movie theater. Then I’m jolted back to the present, and I can’t help but wonder—if they had driven through this changing city now, would they still choose to stop? And if they did, would they see a place to open the restaurant they dreamed of?