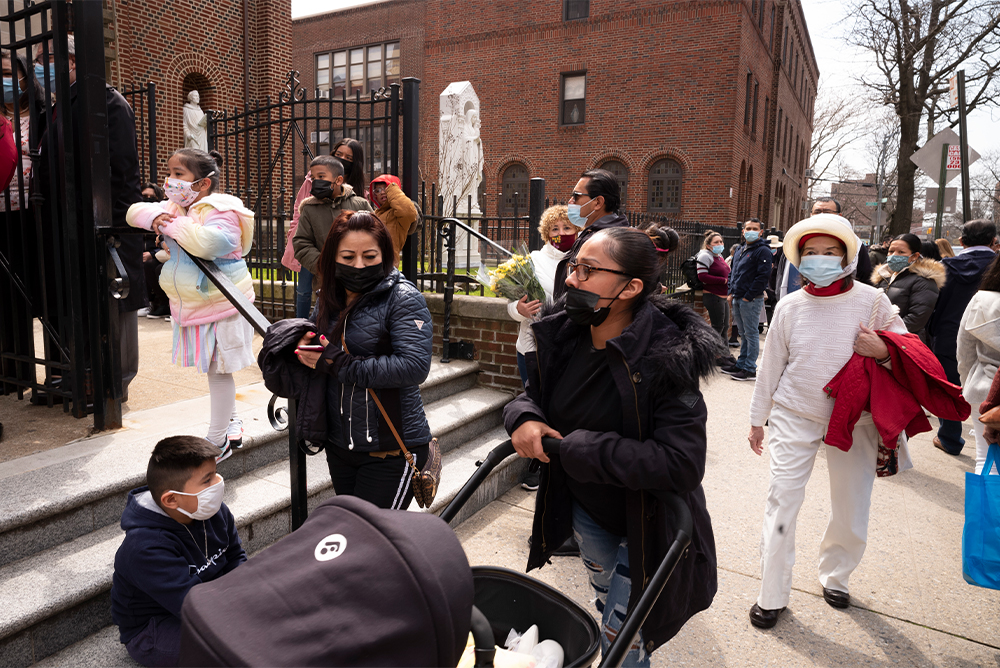 Religion journalist Jim Hinch considers the support kids need to survive—and even thrive—during struggles such as the COVID-19 pandemic. He writes that research, and his family's experiences, suggest that "a loving, welcoming religious community" can help. Courtesy of AP Newsroom.


The school year is under way and the kids, we are told, are not all right.

America’s families are suffering through what a recent front-page story in the New York Times called a “Mental Health Crisis Among U.S. Teens.” Rates of depression, anxiety, emergency room visits, and suicide rose by double-digit percentages in the past decade and worsened during the COVID-19 pandemic. In a special adolescent mental health advisory issued late last year, U.S. Surgeon General Vivek Murthy warned of a “devastating” decline in youth mental health caused by an “unprecedented” array of challenges, including pandemic disruptions, political turmoil, social inequities, and escalating technology use.

My kids, Frannie and Benjamin, are 15 and 12. Our family lives in New York City, where we rode out the dark days of the pandemic in our house on 99th Street. My wife, Kate, is an Episcopal priest, and leads a medium-sized parish in Manhattan. I’m a part-time editor at Guideposts, a non-profit religion journalism magazine.

The pandemic exposed our kids to at least six of the nine mental health risk factors identified in the surgeon general’s advisory. Their school went remote and they lost in-person contact with teachers, coaches, and friends. People in our parish got sick. Some died. The church cemetery crematorium (which serves people from all of New York City, not just our parish) ran 18 hours a day, for months. White refrigerated trucks filled with dead bodies rumbled through our neighborhood, accompanied by a police escort.

We participated in protest marches after the death of George Floyd and saw wreckage after things turned violent. There was a stabbing around the corner from our house, and a shooting on our block. An unlocked garbage shed across the street became a popular place for people to hang out and use drugs. At one point, so many people fled our neighborhood, the kids played a game on dog walks, furnishing an imaginary apartment with all the furniture discarded on the sidewalks.

Yet, despite everything, our kids not only survived the pandemic, but thrived. Today, Frannie, who began 2020 as a socially insecure seventh grader, is a happy and well-adjusted sophomore in high school pursuing an interest in archeology and playing volleyball. Benjamin started seventh grade this year. Except for some eye-rolling at what he calls the “drama” of middle school life, he, too, is happy and engaged, focused on his scout troop, his schoolwork, and making Lego stop motion movies.

As a parent, I marveled at our kids’ resilience. As a journalist, I wondered where it came from. Kate and I are not particularly talented parents. There were no ingenious pandemic survival hacks in our household. We made it up day by day, just like everyone else.

One explanation emerged from stories I worked on, including one about resilience in a faith-based after-school program in Chicago. My reporting led me to Christian Smith, a sociologist of religion at the University of Notre Dame, who referred to what he called “gobs of work that shows the pro-social, pro-health, pro-everything effects of religion” on mental health.

As a parent, I marveled at our kids’ resilience. As a journalist, I wondered where it came from.

I began to wonder whether growing up in church had helped our kids ride out the storm.

Kate and I are Christians. Kate grew up religious. I came to faith later in life. We have raised our kids in the various churches where Kate has served as a priest. Our family life is guided by our spiritual beliefs. We pray at meals, at bedtime, and before we make big decisions or undertake major endeavors. We keep a Sabbath on Saturday and spend a good portion of each Sunday at church. We try to think of our lives in terms of how we use our gifts to serve others. Note that I said try. Our family’s efforts to live up to our standards often fall comically short. As a wise friend of ours says, you can’t always do what you can sometimes do.

Research suggests we’re at least doing something. Recent studies at Stanford and Brigham Young universities found that religiously involved teens suffered lower rates of depression, anxiety, suicide, family instability, and school setbacks during the pandemic. A major survey of mental health research conducted before and during the pandemic by scholars at Harvard University came to similar conclusions. Frequent attendance at religious services, the survey found, correlates with elevated levels of personal well-being, happiness, and quality of life, and lower levels of depression and suicide. For adolescents specifically, religious service attendance correlates with lower rates of smoking, drinking, drug use, and risky sexual behavior.

Other recent studies have found that religious involvement helps lower-income boys succeed in school and endows teens of all backgrounds with what Columbia University researcher Lisa Miller calls a “spiritual wholeness” that guards against an array of mental health challenges.

“Kids who are religiously involved are doing way better than non-religious kids,” Notre Dame’s Smith told me. Smith and other experts attribute religion’s unique benefits to the combination of a larger spiritual perspective with the community support of regular service attendance. Spirituality alone or membership in a secular community organization don’t provide the same protective “spiritual wholeness.”

Our family’s church, St. Michael’s, is a 215-year-old congregation serving people from all strata of a diverse urban parish—lawyers, professors, social workers, semi-homeless drug users, public housing residents, elders on fixed incomes, descendants of Caribbean immigrants, and students. The building is a hive of activity, housing a Spanish-language preschool, a neighborhood feeding program, homework tutoring, an orchestra for underprivileged youth, 12-step groups, and other community programs. The prevailing mood is welcoming love combined with barely controlled chaos. It seems to have been a nourishing place to grow up.

Our kids don’t always welcome the ways Christianity (at least as it’s lived at St. Michael’s) pushes back against American individualism and consumerism, especially when, as the kids put it, our family “acts weird and can’t afford stuff.” Yet, faith has helped our kids bypass some of the crueler passages of adolescence. When things get rough at school, there are always church friends to fall back on. When problems seem insoluble, we close our eyes and picture placing the mess in God’s hands: “We’ve done what we can. God will have to handle the rest.” During the pandemic, we talked a lot about discerning the difference between things we can and can’t control. Despite everything they endured, our kids never seemed to doubt that, eventually, in ways they couldn’t foresee or put into words, they’d be okay.

Kids in the Chicago after-school program expressed similar thoughts. Fifteen-year-old Azariah Baker experienced even more of the surgeon general’s risk factors than my kids did. She lives in Austin, a neighborhood on Chicago’s west side where COVID-19 death rates were high and businesses reeled after looting during social justice protests. She also has asthma and worries about her mother, who, she said, “is really old.”

Yet, Azariah spent most of her conversation with me talking not about challenges but about her involvement with By the Hand Club, a faith-based provider of youth social services in Chicago public schools. With help from donors, the club bought a looted liquor store in Austin and turned it into a teen-run community produce market. “My resume is going to be buzzing,” Azariah said.

“God has always been a really important part of my life,” she told me. “It can get overwhelming sometimes…[and my mom] says, ‘Take it up with God. He’ll fix it in the end.’ My job as Azariah is to be kind to others and be Azariah, and everything else is God’s responsibility.”

Neither the surgeon general’s 53-page advisory nor the New York Times’ 3,800-word front-page story mentions religion. The omission is understandable, given America’s polarized views about faith.

Our family couldn’t have gotten through the pandemic—or the rest of life, for that matter—without it.