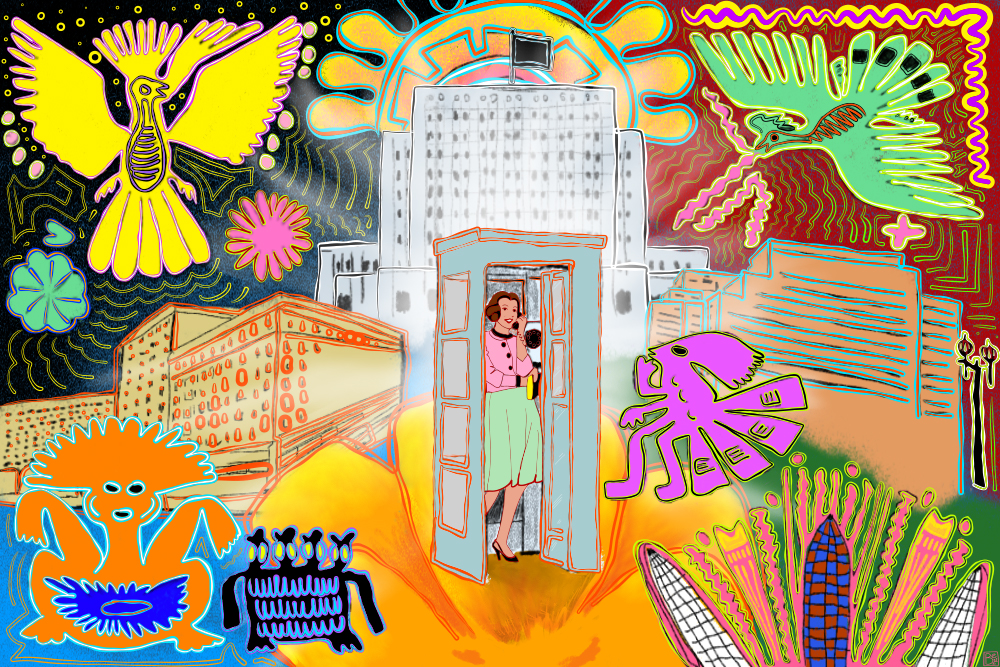 Three generations of Daniel Olivas' family have lived, loved, and worked in Los Angeles. The novelist’s writing depicts his "hometown’s profound Mexican roots," centering "a people and culture that so often have been erased" in L.A. literature. Illustration by Be Boggs.

This piece publishes alongside the Zócalo/ALOUD free event “How Does L.A. Inspire First-Time Novelists?” this Thursday, November 10, at 7PM PST. Register to attend in person or online.


It took until the cusp of middle age—the ripe age of 39—for me to write what would become my first book.

The spark for this new stage of my life was grief. My wife and I were lucky to have a healthy 8-year-old boy, but the pregnancy had been difficult. Little did we know that the experience would portend years of trying to have another child—and eventually, seven miscarriages.

I was content to stop after the first miscarriage, but my wife deeply desired another baby, so who was I to argue? But by the fifth miscarriage, as I tried to help my wife and young son through their grief, I was struggling with my own. In search of comfort and healing, I started to write.

The subject matter that I chose to explore was my paternal grandparents’ migration from Mexico to Los Angeles in the 1920s. I wanted to construct, from both family history and my own imagination, their lives in this city. I wanted to imagine and write about the struggles and triumphs of people who left their homeland to begin anew—perhaps as a guide, of sorts, to help me navigate my grief, or even as a simple reassurance that we all suffer through difficult times but we can work through them and not only survive but thrive.

Something deep inside me whispered that this creative exercise might offer catharsis, a release from the grief I was enduring. And it did. The Courtship of María Rivera Peña, my first novella, gave me new space to explore the joy and pains that life presents. I am not trained in psychology, but I suspect there is a term for what I experienced. There were moments during the writing process when tears ran down my face in a way that was almost cleansing. Seeing the fictionalized lives of my grandparents take form on the page of my novella seemed to clarify the well of hurt I felt, making it more bearable.

The Courtship of María Rivera Peña has been on my mind because I’ve been looking into getting it back in print for its 25th anniversary. Returning to the text now—it’s been at least a decade since I’ve read it last—I’ve been struck by how present Los Angeles is in the tale, the location giving the story meaning, contours, and vibrancy. Set amid the dramatic growth and development of the late 1920s to the early 1950s L.A., the city offers Humberto Isla Velasco (known by his nickname of “Beto”), María, and their community places to worship, ways to earn a living, and spaces to commune over meals and be entertained. All of this fed their souls, bodies, and minds in ways that enriched their daily existence even amid struggles that immigrants in this country so often face, from bigotry to economic inequality.

My people have been here for a century, and the major milestones of my life are spread throughout Los Angeles, like so many marbles on a schoolyard.

That Los Angeles has deeply informed my fiction from the start makes sense because L.A. is so deeply embedded in my DNA, if a metropolis can imprint itself on our essence. My people have been here for a century, and the major milestones of my life are spread throughout Los Angeles, like so many marbles on a schoolyard.

I was born at the now-shuttered Temple Community Hospital on North Hoover Avenue, a year after the Dodgers left Brooklyn and played their first game in Los Angeles. I spent the first few years of my life three miles from that hospital in a little blue house on Dewey Avenue that was torn down to make way for a parking lot that serves Loyola High School where I would eventually enroll years later. And a few months before JFK’s assassination, we moved a half mile west to a gray wood-framed house on Ardmore Avenue that I called home until I married and moved to the San Fernando Valley to start a family. When our son eventually graduated from UCLA and moved out, one of his first apartments was in Koreatown not far from the blue-green, terra-cotta-tiled Wiltern Theatre on Wilshire Boulevard, where I enjoyed double features as a child. And as empty nesters, my wife and I migrated out of the Valley toward downtown Los Angeles, eventually settling in Pasadena.

All of these pieces of Los Angeles have made their way into my work, the landmarks and history natural allies in my attempts to depict my hometown’s profound Mexican roots and to center a people and culture that so often have been erased—or worse yet, stereotyped—in works that critics have dubbed “essential” Los Angeles literature but have largely ignored my community. My writing is a natural reflection of the L.A. I know, a place that’s deeply segregated, with an ugly history of police brutality, exclusion, and systematic alienation, but also one where many have thrived and built remarkable lives against seemingly insurmountable obstacles.

My relationship with Los Angeles continues to grow stronger and more complex as the years go by. A few months ago, I visited my mother at the small house in Ventura she and my late father purchased in the mid-1980s. We chatted about her parents’ courtship as well as her courtship with my father. Many of the family stories that she shared I had known for years—but she also told me something that reminded me how tied I really am, physically and spiritually, to this place.

At one point, we talked about the moments when my grandfather and father realized they were ready to marry. For my grandfather, the light bulb went off in 1925 at the Alexandria Hotel on 501 South Spring Street, where he was reunited with my grandmother (who had been his girlfriend in Mexico) at a party. In what I imagine was a magical evening, my grandfather swore off the single life and proposed marriage. For my parents, something similar happened in 1952, just down the street, at the Title Insurance and Trust Building at 433 South Spring Street. My mother worked as a secretary there and used to take lunchtime calls from my father at the public payphone outside. It was during one of those phone calls that he proposed. (Apparently, he had wanted to propose a few days earlier while on a date with my mother, but he felt thwarted by the presence of my aunt who was appointed chaperone by my grandfather.) That same street in downtown plays a starring role in my own life, too, because just steps away from the proposal, I’ve practiced law for the last 31 years in the Reagan State Building at 300 South Spring Street.

Three generations of my family, then, have lived, worked, and loved—for almost 100 years—on this relatively small patch of Spring Street. In a metropolis this size, what are the odds? I pointed out the connection to my mother, and she looked at me for a moment in silence. Then, a smile slowly formed on her beautiful face, and she laughed.

“I can’t believe it,” she said. “But you’re right. Without that street, there wouldn’t be any of us!”

It made me realize that Los Angeles will always be a constant character in my fiction. Because it has, quite literally, made me.