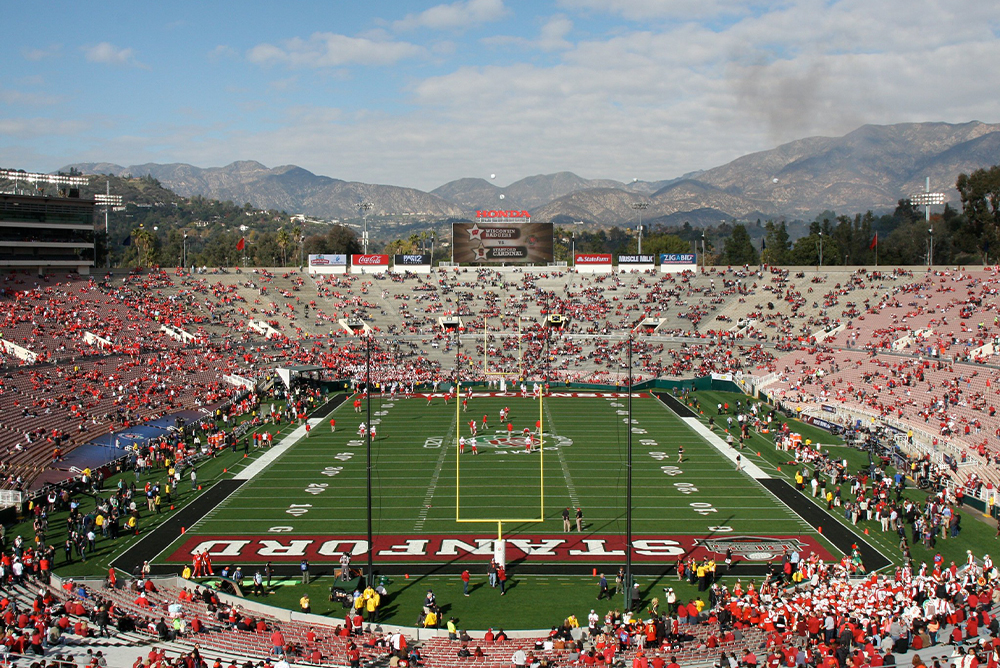 The causes of death were two chronic California diseases—greed and our winner-take-all culture.

In Pasadena, the hometown of your columnist, city and game officials remained in denial, claiming that the Rose Bowl was very much alive. They noted that the old stadium in the Arroyo Seco will continue to be called “Rose Bowl” and will host college football playoffs for many years to come.

But the Rose Bowl itself—a post-season football game pitting top teams from the West (Pac-12) and East (Big 10)—is no more. Ever-changing California has lost a rare and reassuringly stable New Year’s tradition.

The Rose Bowl was known as “the granddaddy of them all” because, when first played by the University of Michigan and Stanford on January 1, 1902, it was the first post-season college football bowl game.

Once considered cutting-edge—for example, the game was the occasion for the first transcontinental radio broadcast of a sporting event—the Rose Bowl came to represent values so old-fashioned that they now seem counter-cultural, even foreign, in our angry and nationalist age.

Today, Americans are bitterly divided by politics, region, and various forms of identity. To make things worse, our systems, in everything from education to business to politics, spread division through competitions that identify an uber-winner, making everyone else a loser.

The Rose Bowl incubated a different tradition, inspiring the creation of college football bowl games that brought together Americans from different regions. This system of bowls, headlined by the Rose Bowl, formed a college football system that produced many winners, rather than just one.

Our systems, in everything from education to business to politics, spread division through competitions that identify an uber-winner, making everyone else a loser. The Rose Bowl incubated a different tradition.

Champions of the Rose Bowl, the Sugar Bowl, the Orange Bowl and so on, each of which could claim their own share of a mythical national championship. It was like one of those Scandinavian elections, where four or five parties emerge as winners, and take seats in a coalition government.

But such a unifying and democratic-minded spirit couldn’t survive long in our cutthroat country.

The Rose Bowl and other bowls resisted a playoff for decades. But in the 21st century, the pressure for a playoff—from university teams, TV networks, and sports journalists—grew. The leading American politician of this century, Barack Obama, even campaigned on a football playoff, making a “winner-should-take-all” argument: “If you’ve got a bunch of teams who play throughout the season, and many of them have one loss or two losses, there’s no clear decisive winner.”

Once president, Obama even took time from other efforts to increase top-down national authority—like mass surveillance and mass deportation—to lobby publicly for a national playoff system.

In 2014, the Rose Bowl, the last and strongest holdout against a playoff, surrendered, and agreed to become part of the playoff system. The Rose Bowl negotiated a deal that preserved its East-West  tradition in part; most years, it could pit a Pac-12 and Big Ten champion, but every third year, it would instead host the semifinal of a four-team playoff.

Sadly, that compromise couldn’t save the game. It only delayed, by a few years, the Rose Bowl’s death.

In 2022, television companies and college football conferences moved to expand the playoffs from four teams to 12. This appealed to the Pac 12, Big Ten and other conferences—more of their universities would make the playoff, and make more money, through television rights fees, for doing so.

The Rose Bowl resisted this push, but had little leverage. So the Rose Bowl signed its own death warrant this fall—giving up not only its traditional East-West matchup, but also its traditional time, on the afternoon of New Year’s Day (except in years when Jan. 1 falls on Sunday, and the game shifts to Jan. 2). Instead, the Rose Bowl will be one of the playoff games, likely a quarterfinal.

In Pasadena, game officials and city leaders have shamelessly spun the death of their traditional game as some kind of victory. More tourists might come to our hometown because of greater excitement around a playoff, they’ve said. But that’s nonsense. Pasadena needed to keep a college football game, because it needs the revenues from the broadcast to help fund the Rose Parade. If that meant jettisoning the Rose Bowl in favor of hosting a playoff quarterfinal—as seems likely—they were willing to do it.

Now, reflecting on the death of the Rose Bowl, some of you may think that your columnist has lost perspective when it comes to his hometown tradition. It’s only a game, right?

But it is you, the sanguine, who have lost perspective.

I read the loss of the Rose Bowl through the work of the French philosopher Jean-Pierre Dupuy, a longtime Stanford professor and a friend and mentor to former Gov. Jerry Brown.

Dupuy is a self-described “enlightened doomsayer,” a philosopher of apocalypse. He argues that “humanity is on a suicidal course, headed straight for catastrophe.” Why? Because we don’t respect the sacred things. We blow through limits. And, in doing so, we produce constant calamities and catastrophes, and unleash violence.

The Rose Bowl game is one such sacred ritual that inspired togetherness. Its death takes us one step closer to the end of the world.

A memorial service for the Rose Bowl will be held the afternoon of January 2, 2023. It will be the final Rose Bowl game with a traditional Pac 12-Big Ten matchup, pitting Penn State and the University of Utah. There is no need to send flowers—the Rose Parade always has thousands of them.