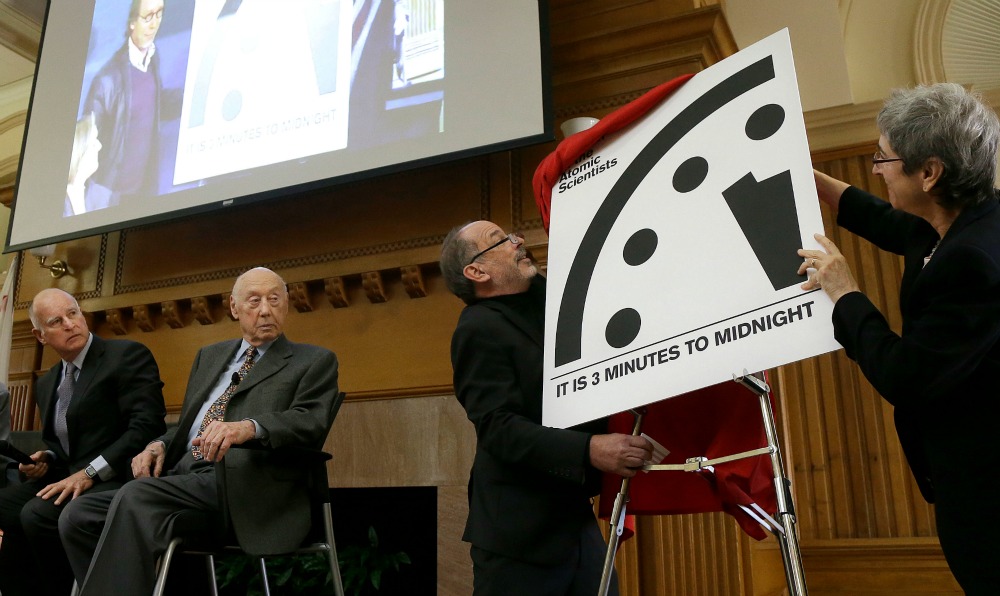 Is California being governed by apocalyptic French philosophy?

Oui. But it’s not the end of the world.

Indeed, apocalyptic French philosophy may finally provide clarity for those of us long puzzled by that great California mystery: What is the meaning of Jerry Brown?

In recent years, our governor’s statements have taken an end-of-days turn, Jerry channeling Jeremiah. The governor has warned of nuclear holocaust, wildfires consuming the entire state, the demise of Silicon Valley if his water plans aren’t adopted, and the apocalypse if we don’t curb carbon emissions. Last month, the governor went to Palo Alto for the latest of unveiling of the Doomsday Clock, a timekeeper for the annihilation of mankind. (It’s just three minutes to midnight, humans.)

Where is he getting all this angst? Here’s one answer: Brown is a longtime friend of the French techno-philosopher Jean-Pierre Dupuy, who practices what is called “enlightened doomsaying” from academic perches at Stanford and Paris’ École Polytechnique.

Dupuy’s long-running conversations with Brown have become more high-profile lately, with Dupuy joining him at events in Paris during December’s climate change talks.

I am neither French nor a philosopher. And I’m no fan of Brown, whose governorship I’ve criticized as too small and cautious, given the size of California’s challenges. But before Christmas, I started reading everything I could find that Dupuy has published in English. And I’m very glad I did.

Dupuy’s work not only provides reassurance that there is a coherent philosophy behind our governor’s ramblings. The work itself is irresistibly thought-provoking, connecting history, science, religion, economics, and art in an open (and sometimes bitterly funny) spirit little seen in scholarship. I’d go so far as to recommend that Californians—as citizens of a global hub for both apocalyptic and utopian thinking—read his most accessible book, The Mark of the Sacred. It should be required for anyone who works in or around state government.

Here is my best attempt to summarize Dupuy’s argument: Humanity is doomed to destroy itself because we have lost our sense of the sacred. We no longer recognize the way our sacred origins—not just faith and religion, but other rituals and traditions that remind us how many things are beyond human control—shape us and all our modes of thought, even reason and science.

This hubris creates two problems. First, we no longer understand our own limits, and recklessly reshape the world without anticipating the consequences of our own inventions. Second, without sufficient respect for the sacred, we can’t convert our knowledge about the threats to our existence—from nuclear weapons to climate change—into the visceral belief necessary to galvanize humanity to save itself.

“It is my profound belief that humanity is on a suicidal course, headed straight for catastrophe,” Dupuy writes. “I speak of catastrophe in the singular, not to designate a single event, but a whole system of disruptions, discontinuities, and basic structural changes that are the consequence of exceeding critical thresholds.”

Dupuy’s solution: a new metaphysics called “enlightened doomsaying.” We must try to imagine ourselves in the unthinkable future, to peer into the black hole of nonexistence so that we might understand our limits and sacred origins. “To believe in fate is to prevent it from happening,” he writes.

That may sound awfully French, but he grounds his philosophy in a classic California story: Alfred Hitchcock’s film Vertigo, a tale of humans falling all over Northern California, from the Golden Gate Bridge to Mission San Juan Bautista. Dupuy calls the film “the womb from which I am issued,” and sees humanity’s rush into Armageddon in the fictions within that movie’s fictions, particularly Jimmy Stewart’s attempts to impose a false reality on Kim Novak’s character.

So now—at the risk of repeating Jimmy Stewart’s mistake—I am compelled to read Dupuy onto Governor Brown.

Brown’s famous skepticism of great plans and new programs makes sense if you believe, as Dupuy argues, that man has become blind to the consequences of his own belief in progress. Brown’s focus on avoiding catastrophes—the strategy linking his budget rainy day fund to his prioritization of climate change—reflects Dupuy’s “prophet-of-doom” calls to focus on postponing the apocalypse.

Brown, like Dupuy, holds deep respect for the sacred—he quotes from various religious traditions and invokes his time in Jesuit seminary, without embracing any particular religion. And just as Dupuy mourns the “loss of difference between levels that characterize hierarchy,” Brown has sought to reestablish hierarchy, removing himself from many daily debates, relying on powerful elder wise men to pursue policies from water to high-speed rail, while keeping an unusually small staff.

Some of Brown’s most puzzling statements—his criticism of “desire” and consumerism—echo Dupuy. The French philosopher argues that as we lose our sense of the sacred, we fill the void with our own desires—and that creates envy that leads to conflict. Here’s Brown, speaking at the Doomsday Clock: “California is so full of low-priority needs. In fact, I have to tell you something about needs, because needs are the whole issue. What I have found is, and I have developed a hierarchy: First we get a desire; and then the desire is transmogrified into a need; and then we get a law; and then we get a right; and then we get a lawsuit.”

Of course, Dupuy, as philosopher, poses questions you’ll never hear on the stump in Stockton: Has Christianity preserved the sacred—or obliterated it by replacing so many traditional religions and rituals? What are the virtues of scapegoating? And which would be worse: the annihilation of the human race, or the eco-totalitarianism that might be instituted to prevent said annihilation?

There are obvious objections to Brown, and to Dupuy. There is a dissonance between the care with which governor and philosopher advise respect for the unknown and the certainty with which they predict Armageddon. I find it unsettling to be governed by someone so focused on the apocalypse. (Of course, my anxiety may be the reaction doomsayers want.) Reading Dupuy, I felt relief that Brown, for all his virtues, will never be president and have access to the nuclear launch codes.

But we also should be comforted that our governor’s aphorisms and warnings lean so heavily on such deep thinking. Dupuy suggests in his writings that we think in the “future perfect” tense—as in, by tomorrow, the apocalypse will have happened. From there, we work backward, as if the end of our existence were already fated, to find the limits that might save us.

To govern is to choose, and to prepare for the future. And while there are certainly happier ways to confront the dangers ahead, there may not be a smarter one.