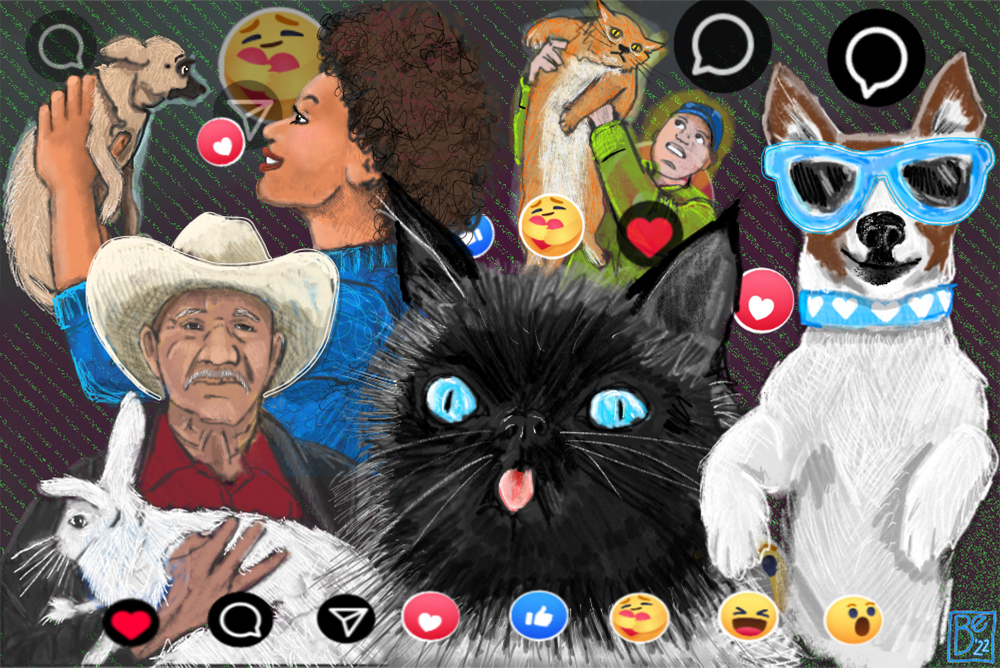 On the internet, especially Instagram and TikTok, pet voices are more popular than ever. Illustration by Be Boggs.


Whether you love or hate people speaking as their pets, using cutesy terms like “pupperinos” and “heckin’ good bois,” or sharing grammatically incorrect cat speak memes, the concept of a “pet voice” has become just as much a part of the social media landscape as images of furry and scaly companions themselves. Indeed, speaking with, and through, animals to convey our very human emotions and thoughts is one of the hallmark practices of internet culture.

But the pet voice phenomenon isn’t unique to the social media age. Media and pets have always been intertwined, and owners and animal fans alike have played with communication through them for hundreds of years.

As historian Katherine Grier details in Pets in America: A History, as early as the 19th century, people were exchanging letters to each other in the voices of their furry companions. Taking advantage of the rise in photographic technology, they also began printing out photo plates of their animals to distribute to their friends. Such interpersonal practices can be seen as the Victorian equivalent of sending cute pet pictures via messaging apps like Snapchat or WhatsApp.

But not all early pet practices were so innocuous. Fashion scholar Julia Long problematizes the way humans have used pets as props. She points to an 1886 Washington Post interview with a woman “lavishing her valuable affection” on the pet beetles she wore as a fashion statement. “When asked if the beetle ‘knew’ his owner,” the reporter notes, “this lady expressed extreme anguish and astonishment at the thought of her beloved pet not returning her affection.”

The thought of wearing a beetle like a brooch, let alone keeping one as a pet, may give many readers pause today. But as a communication tactic, the practice speaks volumes. The act of anthropomorphizing, or attributing human characteristics to non-human entities, is a distancing concept. By pretending to speak as another, particularly one that cannot actually speak for itself, the woman giving the beetles a “voice” becomes removed from their utterances. This distance, however slight, has immense implications in today’s mediated times. One of the most famous New Yorker cartoons features two dogs at a computer saying, “On the Internet, nobody knows you’re a dog.” The cartoon demonstrates how speaking through pets plays into the internet’s ambivalence, or the difficulty in ascertaining definitive meanings in online communication.

The act of attributing human characteristics to non-human entities is a distancing concept.

It’s especially important we understand this tactic today because the anthropomorphized pet voice has taken on new life in the era of Instagram and TikTok. And as I discuss in my new book, The Internet is for Cats: How Animal Images Shape Our Digital Lives, such animal imagery is often used to mask some of the more insidious parts of internet culture, such as hate speech and harassment.

The “chill amphibian meme” of Pepe the Frog, who the Anti-Defamation League declared a hate symbol in 2016, shows how malicious human posters can warp seemingly innocent images of pets and animals. Additionally, in speaking as an animal, even a cartoon frog, the human poster puts distance between themselves and what they have said. On the opposite end of the political spectrum from Pepe is Jorts the Cat, a popular Twitter account that tweets aggressively pro-union and labor rights sentiments from behind the veil of an orange tabby. And paradoxically, it hits harder when an internet cat critiques a governor over legislation.

The distancing of anthropomorphism also has become a lucrative benefit for businesses and brands. In recent years, pet influencers have skyrocketed in popularity—and become intertwined with sponsored posts and advertising deals. As internet scholar Sophie Bishop has discussed, brands engage in a “safety dance” when recruiting influencers, a process that involves the use of automated tools to gauge the potential risk of a prospective human influencer damaging the brand. Pets bypass that safety dance entirely. Even though there is always a human poster behind a pet influencer, the distance brought by the pet voice makes them “safer,” and in turn, more marketable.

When I attended 2020 PetCon, the annual pet influencer and internet celebrity convention, founder Loni Edwards told the room as much:

You get all the benefits of the human influencer with the cuteness of pets. Everyone loves pets. They’re joyful, they’re cute, they make us happy. But they’re not going to get drunk at a party and hurt your brand like a human influencer.

While pet voice is comforting and common, it does bring with it serious implications to think about in our accelerated and ubiquitous communication in the digital age. But all LOLz are not lost. As one person with a pet account told me, “[S]ocial media used to be this fun thing, but now it can come with a lot of negativity and stress. So, I have followed certain cute animal accounts as just a way to have a burst of positivity in my feed as I’m scrolling. Being able to add to that is nice, too.” As long as we remember the human behind the pet voice, pet images and videos can be a reprieve from the more cumbersome aspects of being online.