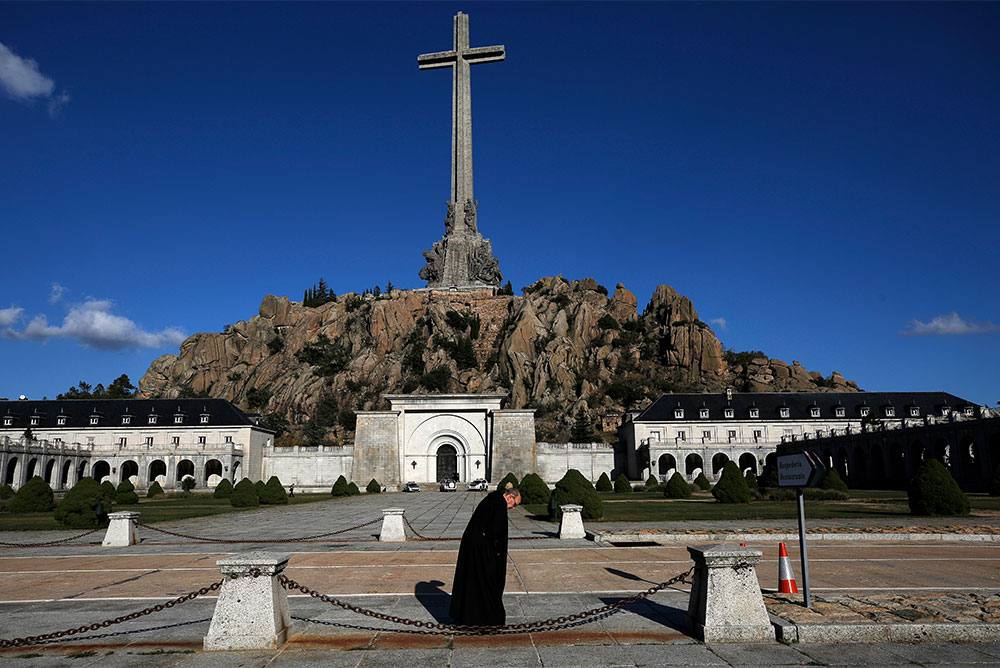 Built by political prisoners, the Valle de los Caídos, or Valley of the Fallen, is a contested site of memory in Spain. Historian Tyler Goldberger writes about recent efforts by citizens to dispel collective amnesia around dictator Francisco Franco's regime and demand accountability for his forgotten victims. Courtesy of AP Newsroom.


Provocatively deemed “The Spanish Holocaust” by historian Paul Preston, the Spanish Civil War—a conflict, extending from 1936 to 1939 that resulted in the repression, torture, and death of hundreds of thousands of people—weighs heavily in Spain’s collective memory. The traditional narrative of the war, asserted by the victorious dictator Francisco Franco, held that Franco and his Nationalist forces defeated an oppositional leftist coalition, the Republicans, to restore Spain to its past greatness. This interpretation of events remained essentially unchallenged in Spanish popular memory for decades, aided by censorship and repression during Franco’s own rule from 1939 to 1975, and by informal and institutionalized practices of later governments.

The Nationalist narrative persisted because Spanish authorities stifled any and all opposing memories of the war, silencing the stories of the hundreds of thousands of Republicans killed and exiled during and after the war, as well as those of the estimated 114,000 Republican victims whose fates remain unknown today. That is, until these narratives re-emerged at the turn of the 21st century, brought to light by Emilio Silva, a journalist and human rights activist whose grandfather, who identified as a Republican, was murdered in 1936 by Nationalist forces and tossed in a ditch.

Silva’s search for his grandfather both literally and figuratively unearthed long-silenced stories of the war’s brutality and revealed the myriad of tensions related to Spanish memory. His efforts, along with countless others demanding Spain and those who perpetrated Spain’s bloody past to confront this violence, have opened up avenues to negotiate more equitable and democratic memories today.

There is arguably no better example to illustrate the triumphs and challenges of Silva’s and others’ labor than the evolution of the Valle de los Caídos, or Valley of the Fallen (referred to here as the Valley), a contested site of memory in a mountainous region overlooking Madrid, the capital city and a strategic battleground during the Spanish Civil War.

Franco decreed the erection of the Valley on April 1, 1940, the one-year anniversary of the Nationalist victory over the Republicans. Hoping to honor his notion of the legacy of the Spanish Civil War and “to further the memory of the fallen in our glorious Crusade” for “a better Spain,” he ordered the construction of a basilica, a cemetery, and a cross extending 150 meters high and 47 meters wide in the Cuelgamuros Valley. Nearby stands El Escorial, a UNESCO site that houses the remains of Spanish kings dating back to the 16th century, speaking to a sense of royalty that Franco ascribed to this memorial.

Upon the opening of the Valley on April 1, 1959, Franco relocated the remains of José Antonio Primo de Rivera, a fascist leader killed during the Spanish Civil War, to the center of the basilica, honoring him with the only engraved tombstone at that time. When Franco died of natural causes in 1975, he, too, received a ceremonial burial with tens of thousands of people mourning at the Valley, as he was lowered into his dignified resting ground.

The almost 20-year construction of this monument to Nationalist glory and Republican defeat relied heavily on the labor of Republican political prisoners. They had to work above and around the bodies of deceased fellow Republicans—an estimated 33,000. Franco had ordered these victims’ remains to be exhumed from elsewhere and dumped under the spot where he built the new memorial. The Valley is a mass cemetery, yet without any signage or interpretation acknowledging these victims, the site continually reinforces amnesia of Republican memories.

Silva’s search for his grandfather both literally and figuratively unearthed long-silenced stories of the war’s brutality and revealed the myriad of tensions related to Spanish memory.

In the generation following Franco’s death, the Spanish government preserved this intentional silencing of Republican narratives, institutionalizing forgetting through efforts like the 1977 Amnesty Law, which barred Spanish Civil War perpetrators from domestic prosecution. Yet while Spain refused to judicially confront its own violent past, its courts served as a global leader of universal jurisdiction. In 1998, former Spanish Judge Baltasar Garzón issued an international warrant for former Chilean right-wing dictator Augusto Pinochet, illustrating transnational penal accountability. Ironically, when Garzón sought, ten years later, to bring charges of crimes against humanity committed during the Franco dictatorship, he was promptly convicted of a heinous crime and disbarred from his judgeship, a conviction that still holds today.

Emboldened by Garzón’s stance, non-state actors in Spain increasingly spoke out about reconciling past human rights violations in their own nation. As individuals and through organizations, hoping to create a more just society, Spanish citizens began to act.

Emilio Silva led the way. A trained journalist, Silva sought to write about his family history as he learned about the repressed Republican memories held on to by those who have suffered decades without answers to the whereabouts of their loved ones. Speaking to community members and discovering scant archival records, Silva came to learn that his grandfather might be buried in León. When Silva wrote an article for a local newspaper in 2000 entitled, “My Grandfather Was a Disappeared, Too,” it broke the decades-long silence about Republican loss. Immediately, the article connected Silva’s story to those of thousands of other families in Spain searching for loved ones disappeared, forgotten, and silenced during and following the Spanish Civil War. Volunteer archaeologists and anthropologists came to assist Silva, eventually finding an unmarked mass gravesite and exhuming Silva’s grandfather and 12 other previously disappeared victims of Franco’s forces.

In the 22 years since, Silva’s triumph has spurred hundreds of exhumations, many of which have been spearheaded by the Asociación para la Recuperación de la Memoria Histórica (ARMH), or Association for the Recovery of Historical Memory. ARMH, founded and led by Silva, advocates for the state to dedicate more labor and resources towards righting the wrongs of Spain’s past and prioritizing the victims of Franco’s terror and repression over the hagiographic memory of Franco himself.

Since its genesis, ARMH has fueled a new Spanish memory landscape rooted in civil society activism—the efforts of people on the ground rather than edicts from their iron-fisted leaders—that combats the political polarization that has mired Spanish memory activism. ARMH holds elected officials accountable to do more to actively confront and reckon with Spain’s bloody past. It works directly with local social networks to finance and resource reconciliation and exhumation processes, collecting testimonies from around the world to pinpoint loved ones’ last known whereabouts and resting grounds, and serving as a nexus for volunteers specializing in anthropology, history, digital media, and other disciplines to provide additional documentation of life for disappeared persons. ARMH’s grassroots actors have circulated petitions to the Spanish government to condemn Franco’s regime and to the United Nations Working Group on Enforced or Involuntary Disappearances to insert Spain into global human rights dialogue; have created community empowerment outreach programs to raise awareness about the past while bringing suffering families together; and have supported exhumations of forgotten victims of the war throughout the nation, driving Spain to rewrite and rebalance its memories of the past.

Individuals and organizations who contest monolithic state-created and state-sustained narratives create broader, more inclusive tellings of complex pasts. By amplifying voices previously silenced, they prioritize human rights and help societies reckon with and learn from past atrocities. They legitimize the identities, legacies, and memories of all people in society—not just those with the power to dictate how the past has been remembered and forgotten.

This is apparent at the Valley of the Fallen. ARMH’s front-line activism has been integral to reinterpreting the site to work toward memorializing both sides of the war. In 2007, ARMH’s demands to resignify the Valley manifested in the Historical Memory Law that specifically bans any shows of support for Franco and his fascist ideologies within this site of memory. ARMH continued to fight so that, in 2018, this law expanded to limit the burials of the Valley to those who died during the Spanish Civil War, calling for Franco’s exhumation. The leader’s body was exhumed and reinterred at El Pardo-Mingorrubio cemetery in October 2019, now resting next to his wife, his regime officials, and former Dominican Republic dictator Rafael Trujillo.

Most recently, ARMH has spoken out about the passing of the Democratic Memory Law, legislation that holds the state fiscally responsible for searching for and identifying victims from the Spanish Civil War and Franco’s dictatorship. While this law makes huge strides in condemning Franco’s regime, ARMH “criticizes” this law for not going far enough, denouncing the legislation for failing to eliminate the 1977 Amnesty Law, failing to support or compensate families of the disappeared, and failing to pursue justice against Nationalist perpetrators. ARMH remains committed to fighting for national reconciliation that asserts the state as culpable and responsible for locating, exhuming, and reburying Republican victims and prosecuting those who perpetrated crimes.

Today, the Valley represents a more democratic site of memory as the battle to exhume and return unidentified victims from this space continues. While thousands remain buried underneath the basilica, their stories and memories are slowly becoming unburied.