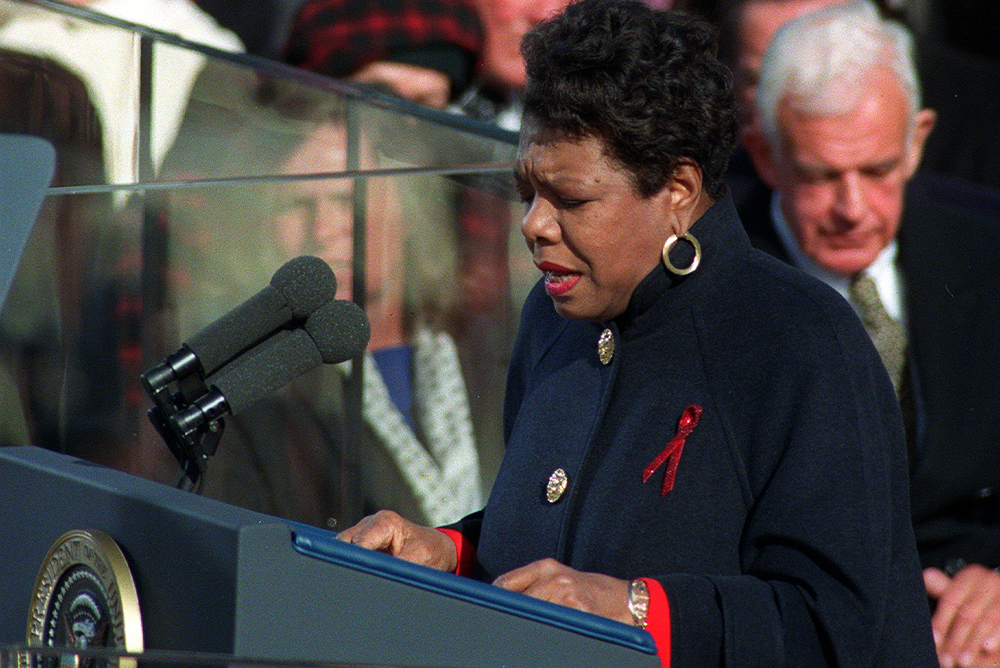 Poetry has always been intertwined with politics, writes contributing editor Derek Mong. Pictured above, poet Maya Angelou recites "On the Pulse of Morning" at the first presidential inauguration of Bill Clinton in 1993. Courtesy of AP Newsroom.


To knock on a door and talk politics with a neighbor. To crack open a book and hear a new voice. To canvass a side street, zig-zagging between houses. To turn from one line to the next until you reach the poem’s improbable end.

How are poetry and campaigning alike? It’s a question I’ve asked myself in the lulls that accompany both: while listening to the dial tone that defines a phone bank and while mulling an image or rhyme. Whatever answers I’ve imagined—about hope or the power of words—stem from November weekends I’ve spent splitting my time between the two.

Let’s begin then with the obvious: Both benefit from a clipboard. I’ve revised many a poem on a canvassing clipboard that I forgot to return. I pace around my office, repeating the same lines of verse. This, of course, is a lot like canvassing a precinct. A good campaigner sets out in search of conversation; they often find tedium in its place. But that tedium can give way to insights, which flare up like fireworks or startle like horns.

I once spoke about a possible Black president to a white guy on a sit mower; I watched his cigarette burn down to his knuckle. Years later, I met an immigrant family, all first-time voters. They wanted to talk and talk. Moments like these offer nourishment across any campaign’s march—a journey that includes resignation and a bit of revilement. If you’re lucky, it ends in reward. That too is like writing a poem.

Doesn’t this speak to a mutual vulnerability and courting of rejection? A willingness to expose some soft-bellied self to the world? The canvasser can expect a fair share of slurs and curses, slammed doors and snarling dogs. It can get personal. (One resident threatened to get his gun.) The contemporary poet often wears the first person like a thin mask. She submits her work; she waits for a “yes.” If or when it comes, its affirmation is limited—an editor here, a comment there. Most poets will encounter just a fraction of their readers. Campaigners shake hands and watch election night tallies—Walt Whitman called this “the final ballot-shower”—but can’t follow their voters into the booth.

The late New York politician Mario Cuomo once quipped, “You campaign in poetry; you govern in prose.” Poetry here is a metaphor. For the flourish and the promise. Prose is the achievable—it’s plain. But can’t poetry itself campaign? Every nature poem I write campaigns for climate justice. In doing so, I’m consciously working as a latter-day Romantic. To quote Percy Shelley: “Poets are the unacknowledged legislators of the world.”

It is surprise, however—or, better yet, astonishment—that the campaigner and the poet truly share.

His legacy proved him right. The Romanticism of Shelley and his peers, who saw themselves as political actors, influenced Henry David Thoreau, who influenced John Muir, who influenced Teddy Roosevelt. And it was Roosevelt who, in 1906, established the first national monuments—like Devils Tower in Wyoming—that would form the core of the National Park System. So poets are campaigners, even legislators, just working at widely varying speeds. Poetry can take generations to sink in.

“We make out of the quarrel with others, rhetoric, but of the quarrel with ourselves, poetry,” William Butler Yeats wrote, dividing wordsmithing into two insoluble halves: persuasion on one side, poetry the other. It’s a division that many activist-poets resist. Like Adrienne Rich and Allen Ginsberg. Like June Jordan who, in the short poem, “Calling on All Silent Minorities,” reasserts her voice with the first word:

Jordan’s all-caps orthography sets an example: forget silence, go loud! Her colloquial diction invites everyone who can hear. It’s all a game, she implies early: the disenfranchised hide, the powerful pretend to seek. Better for this new majority to construct its own apparatus of resistance, an act that starts with imagination and work. There’s no tree here yet, but there will be. Let’s plant it.

I suppose it should shock no one that poets as different as Robert Lowell, a Boston Brahmin, and Eileen Myles, a puckish avant-gardist, made political endorsements. Lowell stumped for Eugene McCarthy in the 1968 Democratic presidential primary. Myles, who made her own bid for president in 1992, joined “Artists for Hillary,” a candidate-sponsored collective, in 2016. Other poets—from Robert Frost to Richard Blanco, Maya Angelou to Amanda Gorman—arrive when it all ends in balloons. Both the electioneering poet and the inaugural poet add prestige.

It is surprise, however—or, better yet, astonishment—that the campaigner and the poet truly share. At whom they’ll meet. At what they’ll learn. At the outcome born from long hours of work. I found just that last November when I volunteered for Marie Gluesenkamp Perez, a first-time congressional candidate in southwestern Washington state. One pundit-pollster put her chances at 2%. Her noxious, anti-democratic opponent seemed poised to prevail.

So when the AP called the race in her favor, I felt as I do when I finish reading a remarkable poem: stunned at the sudden beauty of the world. And then I felt my body do what it reflexively does when poetry astounds: I sat down and wept.