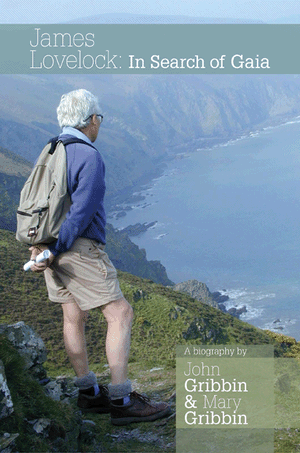 James Lovelock: In Search of Gaia

by John Gribbin and Mary Gribbin

In the early 1980s, as his wife slowly succumbed to cancer and as his grandest scientific theory suffered withering criticism, James Lovelock began to have regular chest pains.

Lovelock – the originator of Gaia theory, which argues that the Earth is something like a single living cell, working to stay alive – ignored the pain, popped some pills, and went about his work. When he finally sought serious medical advice, doctors told him he needed immediate surgery, and that the only reason he was alive was that one small artery had begun to compensate for the complete blockage of his left coronary. Or, as one doctor explained, Lovelock “built his own bypass.”

Life imitates science, or perhaps, life imitates life. Like his self-made bypass, Lovelock spent his career explaining how the Earth – through a delicate system of cycles and balances, the work of living and nonliving things – creates conditions for its continued existence. The Gaia theory gave scientific grounding to the environmental movement and sounded an early alarm on climate change, even as it was questioned by many scientists and misinterpreted by New-Agers. As Lovelock approaches 90 years of age, John Gribbin and Mary Gribbin offer a biography of the man and his big idea, tracing the sometimes chance circumstances that brought each to the public eye.

Lovelock’s life is a full one, beginning, as might be expected, with a penchant for science fiction and youthful chemistry experiments and hand-built radios. He grew up in a working class household run by encouraging parents. The young Lovelock hated school, was something of an autodidact until university. He had a “very British type of marriage,” arranged, at the urging of his superiors, with a young coworker at the National Institute for Medical Research.

The institute is where, importantly, Lovelock became “a medical man,” crucial to his later understanding of the Earth as a single biological entity, and to his understanding of the nature of life. While there, Lovelock pursued some of his more unusual experiments: opting to burn himself instead of lab rabbits while studying heat radiation; freezing and then reheating hamsters (which led to the myth that he invented the microwave); and exploring a bizarre World War II strategy of lighting the oceans on fire. During this time, left wanting by wartime rationing, Lovelock routinely ate the lab’s Belgian hares and even once mixed human blood with dried eggs for omelettes. The Gribbins quote Lovelock nonchalantly saying, “They were quite palatable – as far as anything made with dried egg was palatable. I suppose that makes me a cannibal.”

Lovelock went on to become an inventor, coming up with various devices to measure concentrations of gases in the air. His electron capture detector – from which he made little cash, despite its wide applicability – helped launch the Green movement as it exposed human impact on the environment. And Lovelock’s device to measure chlorofluorocarbons and their impact on the ozone layer helped get CFCs banned,  as people fretted about cancer exposure. (The Gribbins write pointedly, “Perhaps it would be easier to get controls on greenhouse gas emissions if carbon dioxide caused cancer.”)

It was after this development that Lovelock began to ponder Gaia. His epiphany, as the Gribbins outline the collision of Lovelock’s life and the development of the Earth idea, followed the discovery that the Earth is different atmospherically from Mars and Venus. Lovelock’s experiments with freezing and fire contributed to his understanding of the Earth’s hot and cold stages, and his collaboration with Lynn Margulis, an expert on cells, helped solidify his conception of the Earth as a cell. And, as the Gribbins trace expertly , Lovelock’s realization came after two centuries of suggestions and hints and meanderings by other scientists around the world who saw the Earth as more than a rock in space. Though subject to some criticism still, the Gaia idea has been elevated from hypothesis to theory, for its ability to accurately predict real-world events.

And though Lovelock never considered himself a “doom watch sort of person,” he became increasingly alarmed by greenhouse gas emissions. His ideas for reversing what we’ve done are potentially costly and difficult, but, he argues, necessary measures to avoid his imagined future hot Earth – a planet with life but very few humans, and little or no civilization. Belying the hippie-ish adaptation of his idea, the concept of some benevolent Earth mother, Lovelock says ominously, “Gaia will look after herself. And the best way for her to do that might well be to get rid of us.”

Excerpt: Why should life in the sea seemingly act altruistically for the benefit of life on land? It is easy to see why statements like the one quoted above infuriated evolutionary biologists such as [The Selfish Gene author Richard] Dawkins, who responded vigorously to what seemed to them to be an essential (but nonsensical) component of Gaian thinking – that one species could act for the benefit of other species and get nothing in return.
It was Lovelock’s contention, however, that the whole is greater than the sum of its parts, and in the first edition of Gaia he quoted his colleague Lynn Margulis as saying: ‘Each species to a greater or lesser degree modifies its environment to optimize its reproduction rate. Gaia follows from this by being the sum total of all these individual modifications and by the fact that all species are connected, for the production of gases, food and waste removal, however circuitously, to all others.’ It’s one of life’s little ironies that Dawkins’ most scathing attack on Gaia came in his own book The Extended Phenotype, published in 1982, which promotes his idea that genes, the basic unit of natural selection, can indeed have an influence beyond the confines of the organism that they are part of.

Further Reading: The Revenge of Gaia: Earth’s Climate Crisis & The Fate of Humanity

and The Long Thaw