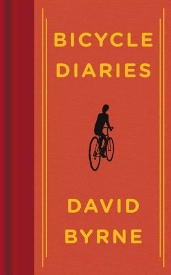 Could all of society’s ills be cured if more people rode bikes?  While David Byrne doesn’t go that far in The Bicycle Diaries, he does make a number of observations that might convince readers to think that way.

Byrne, a founding member of the Talking Heads, has been known to pedal his way through cities on his trusty fold-up bike. His journaling of these rides reveals how much we miss when we drive, and what happens to cities and communities when we stop living where we work.

Byrne doesn’t spend too much time in Los Angeles, which has a growing bicycle subculture even if it’s still far from bike-friendly. He cycles instead through the distant suburb of Valencia, which he finds empty of pedestrians. Comparing it to the after effects of a neutron bomb, Byrne claims to be more afraid than he would be in a bad New York City neighborhood. “Everywhere there is lush vegetation fed by hidden sprinklers, and everything is clean.  It seems to be a physical manifestation of the Little Richard quote ‘He got what he wanted but lost what he had.’  This place is obviously a dream come true – visually at least.  It seems to be everything we say we want – but sometimes when we get what we want it turns out to be a nightmare.”

When he visits the set of the HBO series “Big Love” in Valencia, however, he’s enamored by the fakery, and remarks that he loves these “artificial places.” He finds it completely believable as a suburban home, littered with plausible selections of magazines, and clothes precisely strewn across the room. It’s perfect verisimilitude, until he looks above his head, sees so no roof but rather an air-conditioning duct: “In some ways they make our own homes, offices, and bars seem just as hollow and superficial as the sets.  What we call home is just a set too.  We think of the familiar intimate details in our own space – those magazines and books, the tossed-aside articles of clothing – as unique, integral to our lives.  In a sense, though, all they are is a set dressing for our own narrative.”

Byrne’s travels and thoughts aren’t limited to American cities and American issues.  He devotes a chapter each to Manila, London, Istanbul, and other cities.  He opines about Australian fruit bats, why no one bikes in Buenos Aires, and how language is used as a hierarchical tool and can even be a sort of prison: “What may have begun as an instrument of social and economic control has now been internalized by use as a mark of being civilized. As if being controlled were, by inference, seen as a good thing, and to proudly wear the badge of this agent of control – to be able to read and write – makes us better, superior, more advanced,” Byrne says of language while traveling through Manila, in a country marked by a long history of invasion and colonization.

Byrne concludes by arguing that the way most Americans commute to work is unsustainable, and predicting that this practice cannot go on much longer. He writes that “eventually the behavior will inevitably be changed or modified, either thoughtfully and voluntarily, or as a result of tragic consequences.” He knows that riding a bike won’t save the world from climate change or some other catastrophic force, but he does believe that if cities want to survive in the long run, they need to face these challenges now.

And even if bikes could save the world, for Byrne, there’s another reason to ride: “I don’t ride my bike all over the place because it’s ecological or worthy.  I mainly do it for the sense of freedom and exhilaration.”

Excerpt: “Most U.S. cities are not very bike-friendly.  They’re not very pedestrian-friendly either.  They’re car-friendly or at least they very hard to be. In most of these cities one could say that the machines have won. Lives, city planning, budgets, and time are all focused around the automobile. It’s a long-term unsustainable and short-tern lousy living. How did it get this way?”

and Green Metropolis: Why Living Smaller, Living Closer, and Driving Less are the Keys to Sustainability