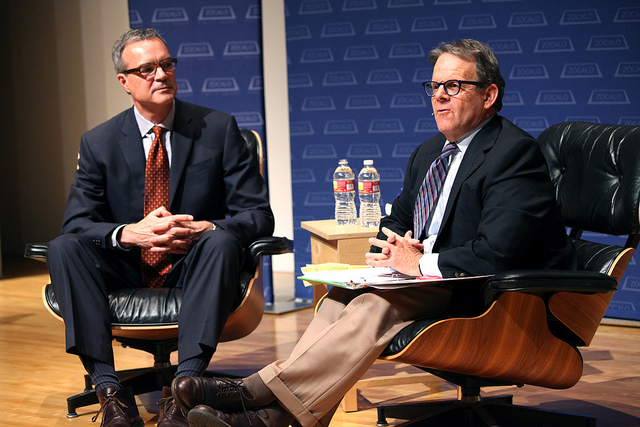 Perjury, journalist James B. Stewart likes to remind people, used to be punishable by having one’s tongue cut out or hanging by one’s ears in the pillory.

These days, perjury in the United States is punishable by, at most, five years in prison. And perhaps unsurprisingly, the number of people willing to lie under oath has increased dramatically.

In fact, “We appear to be on the brink of being a society where perjury is the norm,” Stewart told journalist Henry Weinstein in an interview in front of a crowded auditorium at Los Angeles’ Museum of Contemporary Art. 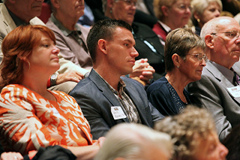 Stewart, whose new book about perjury is Tangled Webs: How False Statements Are Undermining America, and who was recently hired to write a Saturday business column for The New York Times, said a statement from Sen. Kay Bailey Hutchison “appalled me” for its dismissal of the gravity of perjury.

“I certainly hope that if there is going to be an indictment that says something happened,” Hutchison said, referring to the case of CIA agent Valerie Plame’s name being leaked to columnist Bob Novak, on Meet the Press in 2005, “that it is an indictment on a crime and not some perjury technicality where they couldn’t indict on the crime and so they go to something just to show that their two years of investigation was not a waste of time and taxpayer dollars.”

Hutchison’s ignoring the importance of perjury was part of broader government apathy on the issue, Stewart said. President Clinton lied under oath when asked about Monica Lewinsky, and Bush ignored evidence that deputy secretary of state Richard Armitage and senior adviser Karl Rove were behind the leaks of Plame’s identity.

“President Bush testified that Karl Rove said ‘I do talk to Bob Novak occasionally, but the subject of Valerie Plame never came up,’” Stewart said. “So that’s lie number one.”

And yet, neither Rove nor Armitage were ever prosecuted by special investigator Patrick Fitzgerald.
“I’m sure he expected Bush to fire Rove and fire Armitage at the very least, but he didn’t even do that,” Stewart said.

The Unfair Case of Doug Faneuil 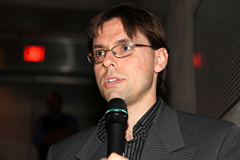 Another of the famous perjury cases profiled in Stewart’s book is that of Martha Stewart (no relation), who served four months in prison after lying under oath about an insider trading case she was involved in. In his talk, Stewart focused not on “the diva of the dining room,” but on the assistant to her stockbroker, 26-year-old Doug Faneuil.

Faneuil inadvertently played a central role in the Stewart case, the journalist recounted. His boss, stockbroker Peter Bacanovic, was out of town when Faneuil noticed that the CEO of ImClone Systems and his family members were dumping shares of their company in late December 2001. Faneueil called Bacanovic, who told him to alert Stewart. He followed the order, and Stewart sold her shares the day before the stock’s value plunged.

Under heavy pressure from Bacanovic, Faneuil lied to the SEC about the order of events. But when he was called before the grand jury in connection with the case, Faneuil changed his mind and corrected the record.

“He basically said ‘that’s a line I can’t cross,’ James B. Stewart said, referring to his extensive interviews with Faneuil. “He had already committed a crime, but he wasn’t going to go any further, and he recanted.”

The result quite literally ruined Fanueil’s life. Although he struck a plea deal that allowed him to avoid jail time, he is banned from working in finance for life. Meanwhile, Stewart has staged a comeback and remains extraordinarily wealthy and admired.

It’s important to note “the impact of perjury not necessarily on the people who commit it, but on the otherwise innocent people who are drawn up in it.” Stewart said. “Now, Martha Stewart says that she can’t even remember what she was charged with, which, by the way, I suspect is yet another lie.”

Why It Matters, and What We Can Do 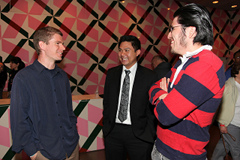 Stewart made clear in his remarks that he considers perjury not just an academic legal issue, but something that genuinely threatens the nation’s ethical foundation and deeply offends him personally. He was particularly interested in the motivations of famous perjurers – Barry Bonds and Bernard Madoff are also featured in his book – and what their actions mean for the rest of us.

“One of the mysteries that drew me to the topic,” he said, “[was that] these were not just street criminals. They had everything, wealth, success, influence, achievement… and yet, they lied, and not just lied, but lied under oath. Why would powerful, influential people like this lie?”

The answer, Stewart said, is that they each carefully weighed the potential risks and benefits and concluded they would not be caught. This despite the fact that for wealthy and successful people, those potential benefits were fairly small.

And the fact that they would come to that conclusion – and that, in Madorff’s case, he got away with lying for 20 years – indicates a perjury crisis of sorts in the nation. Madoff was such a terrible liar, he said, that the SEC officials who investigated his dealings “absolutely knew” he was running a Ponzi scheme.

“The message from the top was the SEC had been somehow too hard on business and they needed to take a friendlier approach,” Stewart said. Acting that way, “we’re going to breed more Madoffs.”

The answer to the problem, Stewart concluded, is two-fold. For starters, the U.S. government needs to take a zero-tolerance approach to perjury and actually prosecute cases, he said.

But ordinary Americans have a role to play as well, he emphasized. People must refuse to accept lying of any sort from their friends, coworkers and children. Only then, he said, will Americans stop tacitly approving perjury from the rich and powerful. 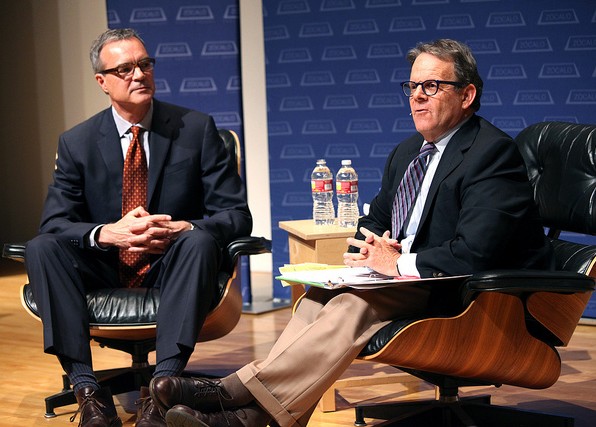