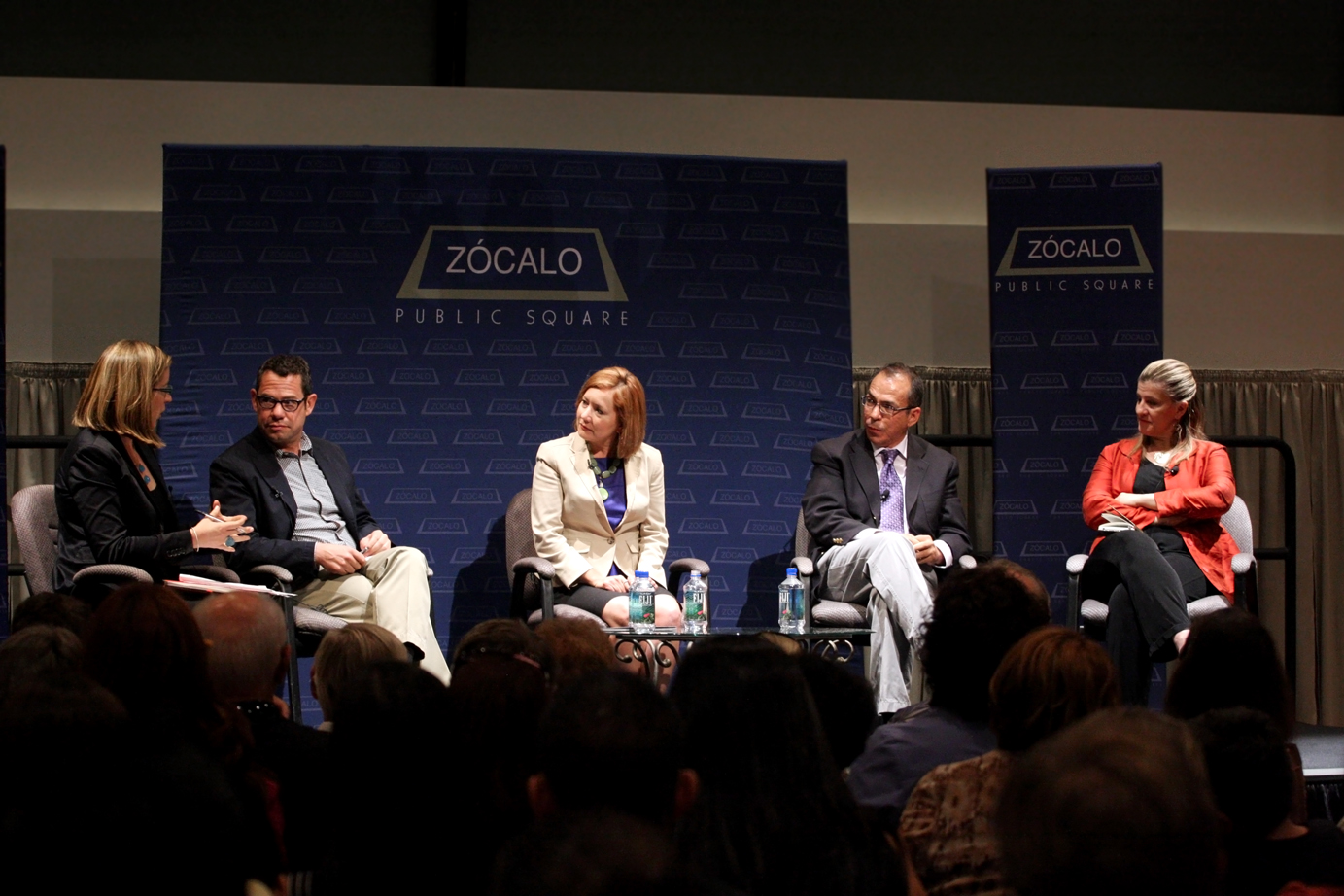 Arizona might not seem like the most logical location for an event called “Telling Mexico’s Stories.” After all, the state is home to the nation’s toughest law against illegal immigration, which many Latino activists have labeled a thinly veiled endorsement of racial profiling. An American Civil Liberties lawsuit against Maricopa County Sherriff Joe Arpaio – known for his colorful and often controversial tactics in arresting and detaining people suspected of being in the country illegally – is pending in a federal district court.

But despite the state’s reputation for being anti-Latino, Phoenix residents filled the auditorium at the Heard Museum for Zócalo Public Square’s first-ever event in Arizona, a panel of prominent Mexico-based journalists discussing the challenges of translating Mexico’s story to a foreign audience. Panel moderator Susana Seijas, a Mexico City-based news producer, opened the event by acknowledging Arizona’s anti-immigrant reputation, which she called “the elephant in the room.”

Guillermo Osorno, editor of Mexico’s glossy lifestyle magazine Gatopardo, had never been to Arizona before he flew in for the Heard Museum event, and he said he had never fully considered what it would be like to visit the state.

“When I was about to take a taxi this afternoon I realized I was in the center of the anti-immigration town, and I felt a little bit weird when I was taking a taxi as a Mexican,” he said. 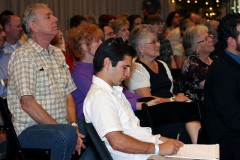 The discussion of Arizona’s relationship with its Latino residents segued into a conversation about the complicated dynamics between the United States and Mexico.

Angela Kocherga, a Tucson native who covers the border region for Belo TV, said too many Americans think of the relationship with Mexico from an “us vs. them” perspective. Walking past a gift shop in Phoenix, she saw a sign for sale that said “Parking For Americans Only.”

“That was kind of a reminder of what this debate is all about,” Kocherga said.

Alfredo Corchado, Mexico City bureau chief for the Dallas Morning News, agreed that Americans have not been honest about their contributions to the problems currently facing Mexico.

“One of the [false stereotypes] is the good vs. bad: you know, all Mexicans are bad and all Americans are good,” he said, adding that such images actually hinder productive relations between the two countries.

All five panelists agreed that the United States needs to address its own responsibility for the Mexican drug war through Americans’ addictions to Mexico-grown drugs and their supplying many of the weapons used south of the border. In March, the mayor, city council president and police chief of Columbus, N.M. were indicted as part of a gun-smuggling ring that was arming Mexican drug cartels.

The relationship between the two nations is fraught for many reasons, said Ana Maria Salazar, host of the Imagen News television program, and Mexicans’ view of the United States is getting worse over time.

But, she said, “it’s a love-hate relationship: you’re angry, but not only are your relatives living in the United States, you aspire to live there.” 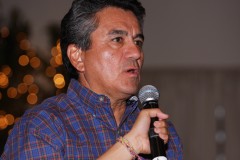 The five panelists, all of whom have reported from and about Mexico for many years, said the job is getting more and more difficult for two major reasons.

First, the constant threat of kidnapping and assassination by drug cartels and corrupt government officials has driven many reporters out of the country and limited the movement of the others, the panelists agreed.

The reporters said they take as many safety precautions as possible, including traveling the country in groups and avoiding the most dangerous areas, but that the risks are still very real. A report released by the Committee to Protect Journalists earlier in the week found that Mexico is among the most dangerous countries for reporters.

Osorno, whose magazine relies primarily on freelancers for its stories, said he worries about people on assignment but has no good way of protecting them other than making sure they have the right training.

“We’re finding ourselves in the horrible situation where we want to do our jobs but … there’s a lot of self-censorship going on because you’re thinking not just about your personal safety and the safety of your families, but the safety of your colleagues” who might be targeted for their association, Salazar added.

Furthermore, cuts in media budgets have meant fewer stories are being reported there. At one point, the Dallas Morning News employed 13 reporters in Mexico; now Corchado works alone.

Salazar said social media has helped reporters do more with fewer resources – she regularly receives tweets with news tips at 3 a.m. – but that it’s not enough.

“We’re seeing more and more that civil society is taking on the role that we should be doing,” she said. “I think 80 percent of what’s going on in Mexico is not being reported.” 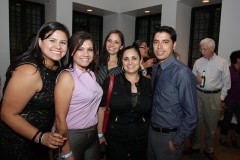 The panelists spent several minutes discussing what subjects are being undercovered in Mexico because of budget cuts, the need to avoid certain areas and the all-consuming nature of covering the drug war. Corchado said he used to write stories that were newsworthy on their own merits, but now he must focus more energy on examining the relevance of each topic to his Dallas readership.

Salazar said the border region does not receive enough coverage beyond the expected tropes about illegal immigration and border patrol officers. And stories highlighting Mexican culture often lose out. While touring a new museum exhibit for a segment on her television show, she felt guilty for not focusing on a more serious topic, she said.

“I kind of have these mixed feelings, you know, you try to talk about these other things, but it can feel sort of frivolous,” she said.

But Osorno emphasized that cultural stories are important too, because they give a fuller sense of the Mexican experience. Although Gatopardo does report on drug trafficking and related violence, it is primarily a culture magazine, which Osorno said provides a unique vantage point. And because the magazine is monthly, the staff spends less time chasing smaller stories and can focus on the bigger picture.

“We do try to convey a different image of Mexico,” Osorno said. “We do report on violence, but we do try to convey what else is going on, particularly on the cultural side. We are getting all those sources of the culture and that vibrancy into the magazine.”

Overall, Kocherga said, the stories of the individuals who comprise Mexico’s population are lost in the constant discussion of the drug war.

“We have to be really careful to get beyond the body count and put a real human face on those numbers,” she said 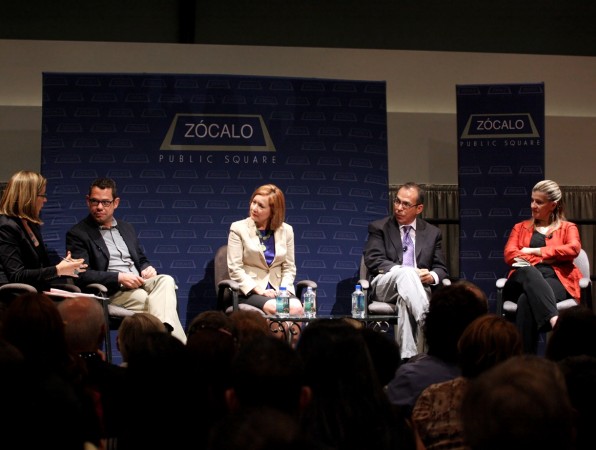