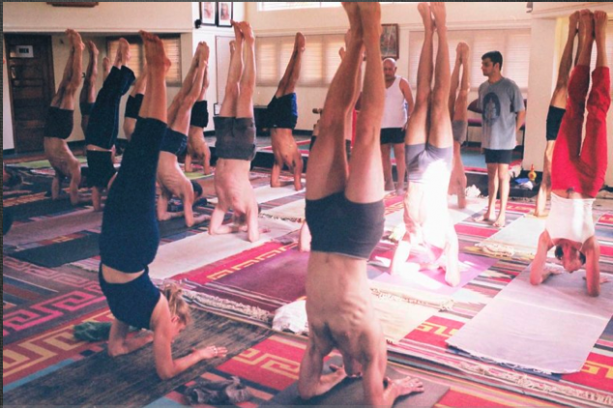 Upon entering an ashtanga yoga studio, this is what you won’t encounter: a welcoming, light-filled space with Krishna Das on the sound system and an exuberant, smiling young teacher sporting dangly Ganesh earrings and telling you that your heart is a vessel of divine light essence as the group smiles its way into tree pose.

Here’s what you might find: A spartan studio tucked behind old retail windows in Portland, Maine, across from a pizza chain and a block from a fishing supply shop. The sign-in sheet sits beneath multiple photos of deceased Indian gurus. If you’re even luckier, you might find yourself in a low, thatch-roofed tent hidden at the end of a dirt path in Goa, India at 6 a.m. Assembled yogis slather their limbs, necks, and faces with all manner of insect repellent, because malarial mosquitoes whine in the heavy air. Nobody talks or smiles. When a scrawny, unblinking German man with thinning hair and a yellow dhoti–think Gandhi pants–enters, everyone stands on their mats, chants in Sanskrit, and then begins to move while breathing like Darth Vader. In a few minutes, sweat and mosquito cream make everyone’s skin slippery and foul. Nobody stops practicing.

Other yogis think ashtanga is an insular cult. But one person’s cult is another’s community. And in the three years I’ve been practicing this yoga–a rigorous sequence of poses linked to breath that each person completes independently, with novices practicing beside contortionists–it has become my community. Entering a studio anywhere in the world brings a comforting familiarity. And if there isn’t an ashtanga studio nearby, practicing on my own transports me, in spirit, back to that Goan hut or to my current yoga home in Portland.

Little creates camaraderie faster than sweating into unlikely positions among mosquitoes before sunrise. But ashtanga is more than a workout, or we adherents would be a rather shallow bunch. The overarching goal of ashtanga is to calm the mind to reach enlightenment. The concept comes from the Bible of yoga texts, Pantanjali’s Yoga Sutras, which says yoga is “the restraint of the modifications of the mind-stuff.” (The Sanskrit word for “mind-stuff” is chit. My yoga teacher recently gave me a bumper sticker that reads “chit happens.”) Enlightenment is theoretical cake–just quiet your brains–but reaching that unpredictable cartoon sage on a precipice requires formidable mountaineering.

So we climb. The idea is that steadfast devotion to learning a challenging sequence of poses, called asanas, clears a path to enlightenment–the mind reaches calm through meditation; meditation requires a still body; poses prep the body to be comfortably static for extended periods. Ashtanga guru Sri K. Pattabhi Jois expressed the idea as “Do your practice and all is coming.” This unique emphasis on physicality, legend has it, comes from an ancient text called the Yoga Korunta. Jois’ teacher, T. Krishnamacharya, found the only known copy and transcribed what he could decipher from ant-ravaged fragments housed in a Kolkata library in the 1920s. Nobody has rediscovered it since.

Ambiguous beginnings aside, the practice attracts a devout cohort of all ages, shapes, and sizes. But our diverse community shares a determined ambition–the poses’ rigor requires it. We also share the idea that ambition should lead to results, despite the practice’s unceasing demonstration that the outcome of our efforts lies beyond our control.

There is an advanced pose in ashtanga’s intermediate series called titibasana. You enter it by standing, legs apart, and then bending forward. Keep bending until your head pokes between your legs. Rest there for five slow breaths, gazing up at your own backside while straightening your legs and clasping your hands around your lower back. Then, shift your focus down between your feet and take five steps forward and then back again without unclasping your hands. Make sure you don’t neglect to look ahead, as I did on a recent morning in Portland. Standing in my usual corner of the tiny, sun-filled studio near a welcoming white brick wall, I stepped, lost my balance, and tumbled onto my head. I missed a sharp-cornered space heater by inches. I sat up scowling and swearing.

“This is not my day,” I fumed. Chit was definitely happening. A woman practicing behind me, much newer to the ashtanga community, began to laugh.

“You mean,” she replied, as I curled into a defeated, sweaty ball, “this is not your day for looking up at your butt with your hands behind your back and then walking around like that?” My teacher and I echoed her laughter. It wasn’t, in fact, my day to succeed at titibasana. But to us nutty ashtangis, each new day is another chance to attempt that unusual view. In doing so, we inch together toward our mountaintop.

Kira Goldenberg is a freelance writer based in Portland, Maine.