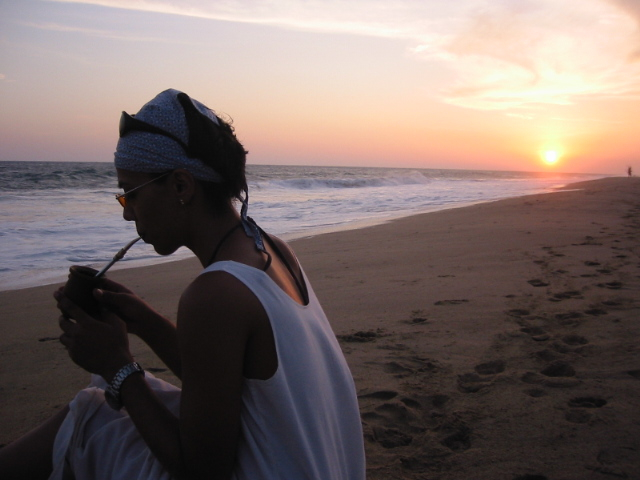 Its name means Foot of the Hill in English, which is far too ordinary-sounding. Pie de la Cuesta really is a surreal sandbar, a wondrous, two-mile-long wash of white, sandy beach that fans out into the Pacific Ocean, 20 minutes up the coast from Acapulco. It is a rough and gritty jungle paradise, Acapulco’s antithesis, unnoticed and in its shadow, and as such draws the tiniest of crowds. At Pie de la Cuesta, there are no thumping beachfront discos, no gaudy souvenir stands, no weaving crowds of young, drunken partiers hooting till dawn, no traffic of fancy cars. In the 1950s, when Rock Hudson was partying in Acapulco, he did not go to Pie de la Cuesta. Pie de la Cuesta does not have Acapulco’s famous cliff divers, for which it would need cliffs. On long weekends when everyone from Mexico City seemed to pile into the hills of Acapulco, I always went down the road to the “foot.”

Why? Because whenever I had a little time off from my job with National Public Radio, the last thing I wanted was more insanity. Pie de la Cuesta offered calm. It was tranquil and pristine, with about a dozen affordable mom-and-pop beach hostels that all offered the same thing: a clean bungalow, hammocks on the beach, cold beer, and fresh fish.

But Pie de la Cuesta was hardly boring. Sometimes it was dangerous. The currents along that stretch of Pacific killed people frequently. In the 15 times I made it down there I saw three or four people nearly die. None had taken any risks; they were just swimming a few yards offshore when the currents suddenly decided to take them. The lucky few I witnessed all got rescued by other swimmers, dragged back to the beach where they collapsed, drawing huge crowds around them. Sometimes it was in the evening, sometimes in the morning. You never knew when it would happen.

The beach didn’t just represent salvation for swimmers. Crossing to its inland side you saw that the sandbar sheltered a deep brackish estuary, cut with hundreds of mellow waterways studded with palm trees. It was where they filmed the Vietnam scenes for the first Rambo film.

Pie de la Cuesta was where our little West Highland Terrier, Cinque, got his first and only shot at summer love. Happening upon a giant Doberman bitch lying in the shade of a tree, he tried to hump her every which way except the right way. His date ended when the Doberman lifted her head and snarled, enough is enough.

Pie de la Cuesta had two vacant beachfront lots where I was sorely tempted to invest and open my own bungalow retreat. But I was warned against it. Real estate dealings in Mexico are a good road to trouble. And Guerrero state is the Wild West, where corruption is the norm. Where a gringo with cash is like a bleeding surfer in a bay full of hammerheads. One foreign bungalow owner was shot dead by one of his own security guys on New Year’s Eve, 2003.

Pie de la Cuesta is where I took my biological mother for her 70th birthday. After, I was driving us home, back towards Mexico City, at two in the morning, doing 100 miles an hour through the darkness. Somewhere south of Chilpancingo, the hardscrabble state capital of Guerrero, I thought it was funny that there was a bull in the road. Then it wasn’t funny. But I was too tired to react. Luckily for us the black beast moved on its own into the left of the two lanes, which was bad luck for the Cherokee four-by-four that tried to pass me at that very moment. As it pulled alongside me it collided with the bull square on. Right outside my driver’s side window. It sounded like someone had dropped an 800-pound hamburger on to a gym floor.

Pie de la Cuesta has a boring name. But it was the perfect spot to unwind, to watch the sun set over the Pacific while drinking a cold Corona with salt and lemon; to read an entire book without leaving your hammock. To do nothing at all.

But things do happen there, amidst the tranquility. Whether I ever make it back, Pie de la Cuesta will be with me forever. It’s where I met my partner, Anne, the love of my life, a decade ago.

Gerry Hadden is the Europe correspondent for PRI’s The World and author of Never the Hope Itself: Love and Ghosts in Latin America and Haiti.