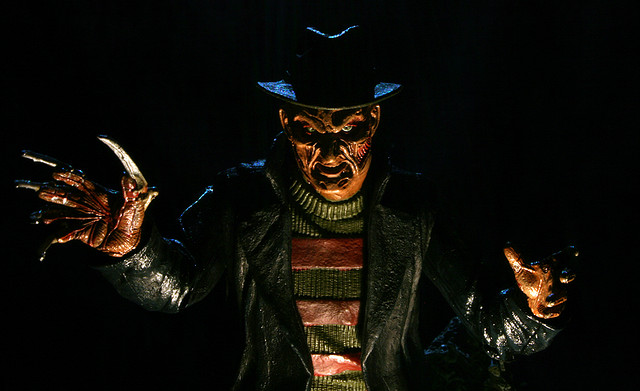 Fourteen years ago, way before I’d penned my first horror-movie script, I found myself studying the philosophy of science at Rutgers. It was something I pursued because it combined the two most unmarketable majors available in college: philosophy and quantum mechanics.

The first horror I read was that of H.P. Lovecraft. Lovecraft’s work is known for its wild imagination, elaborate word choice, loathsome creatures, and insane narrators. What drew me to it most, however, was that its horror felt so quintessentially 20th-century in nature.

In Lovecraft’s short story “From Beyond,” first published in 1934, the protagonists use an invention to see parallel planes of existence, and they discover that monstrous creatures share the space all about us. Just a few years later, the production of the electron microscope allowed scientists to see hordes of monstrous and alien-looking creatures–albeit small ones, like mites and parasites–that share the space all about us. In “The Hounds of Tindalos,” a 1931 Lovecraft-inspired short story by Frank Belknap Long, the titular creatures move back and forth through time as easily as we walk up and down a sidewalk. In that same era, thanks to Albert Einstein, the wider world was starting to understand that such odd relativity was, in many ways, no fantasy. How could a young horror fan immersed in the philosophy of science not love such creations?

My first horror screenplay was about a monster composed purely of sound who hunts college kids imprisoned in a student center. (It was called The Sound, and it got optioned three times but never made. The horror!) Not surprisingly, I found myself drawing heavily on concepts that I was encountering in my studies. One concept was that of “perdurant” events–which are simply events that last a long time. Most of us make an easy distinction between an event and an object. A bomb blowing up is an event. A bomb is an object. But what about a really big bomb? Or a hurricane? Or the giant red storm spot on Jupiter, which seems to have been around for at least 400 years? What’s the distinction between event and object in these cases?

Then I had another thought, one based on my studies of cognition: what if one of these enduring events became able to think? What kind of psychology would a storm have? (In the case of my story, the “storm” was a node of sentient sound.) And what does it mean that storms have no clear boundaries? Of course, in a story designed to fit into 90 minutes of popular consumption, one doesn’t get to spend too much time exploring every related abstruse issue, but it was fun to think about.

In any case, I never would have written anything like this had I been born a hundred years earlier. Before the 20th-century, there was Newtonian science, which had always made sense on a basic level. However complex the calculations might be, the principles were intuitive. You push something, and its speed depends on how much force you use. Big things hit hard, and bigger things hit harder. Things are made up of smaller things, and all of those things act under the same rules–like tinier and tinier billiard balls.

When Newton’s ideas reigned, even our monsters were kept in better check. The demons in the shadows were chimera from the ancient myths or creatures made up of spare parts from existing animals. In the case of Stoker’s vampires, they were humans tweaked with monstrous appetites. They were bad news, to be sure, but they made a certain sense. And something that makes sense is less scary than something that doesn’t.

But in the 20th century, science stopped making sense. Nothingness could be curved, and curved nothingness shaped our life. When things got really small, they didn’t behave anything like tiny billiard balls. In fact, they had properties we couldn’t understand. Space had a structure we could never truly visualize, so we learned to rely on crude diagrams that said, “Space is sorta like this, but not really. Look, kid, just make sure you understand the math.” On a metaphysical level, the 20th century was terrifying.

No wonder Lovecraft’s monsters refused to make sense. No wonder they were, so often, only mathematically describable or comprehensible. And no wonder that, today, the lion’s share of horror revolves around senselessness–or around terrible arrangements we don’t understand.

We get a film like Jeepers Creepers, in which, every 23 years, for 23 days, a monster is let loose from hell to feed.

Or we get a Nightmare on Elm Street, in which sins of the fathers (an extrajudicial killing of a murderer) are visited on the children (revenge killings by the murderer’s ghost).

Or we get The Strangers, in which the character Dollface visits evil upon victims at random:

The 20th-century version of horror is, in some sense, biblical–but old-school biblical, the sort of biblical in which an omniscient God somehow lets his left-hand man and one-third of the angels go wild. Why does he do that? Maybe he has to cut a deal with these monsters so that they can hunt free-range humans every once in a while. Maybe he’s decided that if people haven’t prayed exactly the right way or anointed themselves with water from the right font, then the other side gets to do horrible things to them. Or maybe there’s something else invisible and sinister at work. Maybe, as in Nightmare on Elm Street, we are all damned because of what people long ago did. But if any of this is true, then maybe God’s not so all-powerful after all.

Of course, that sort of thinking undermines faith in our god, and the first commandment of every god is “Thou shalt not doubt.” Doubt is the god-killer. Doubt turns gods into myths and myths into comic book characters. We are damned if we doubt. But we can’t help ourselves. So we live in a constant state of anxiety. Either stop worrying about God and accept the senselessness of the horrors of the world as bad luck, or blame the bad things on our failure to appease God with a proper show of faith, remembering that divine justice is harsh and unpredictable. Neither offers much comfort.

For those who’ve jettisoned the idea of cosmic purpose, refuge is often sought in half-measures. Lacking purpose given to us by a higher being, we attempt to create it for ourselves through our choices. We decide for ourselves what’s right and wrong and impose meaning on the world through our actions. We become existentialists. But a morality so democratic allows Gandhi and Hitler equal say in what’s right and wrong for them. That doesn’t seem like real morality. You might as well be a nihilist. (And let’s face it: an existentialist is a nihilist who isn’t willing to follow his argument to its logical conclusion.)

Of course, we can’t really stomach the thought of such meaninglessness. We cheer the fall of Qaddafi and say that justice has finally been done. After 42 years of cruel tyranny? And what about all those who were killed during those 42 years–what was their great sin? Perhaps, as Dollface explained, it was that they were home. Perhaps “because they were home” is as much of a cosmic moral code as anyone can ever expect in this life.

Except when we slip into that dark theater around Halloween and, for a couple of hours, indulge in what we suspect might really be the truth.

Because, of course, it’s all just a movie …

Steven Palmer Peterson is a screenwriter. His most recent film, The Unmaking of Zombie Hamlet, is being submitted to film festivals now for a 2012 release.