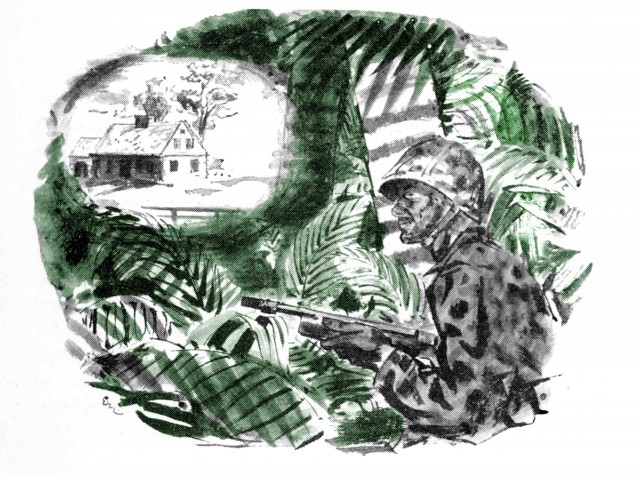 GIs in World War II were urged to consider what their post-war home should be like.

Home is where most Angelenos wanted to live when World War II ended, in a house where “the new” might be acquired as Better Things for Better Living, just as the slogan from DuPont put it. The question then was, which new things? In what kind of house? And would any of these new things actually make living better? 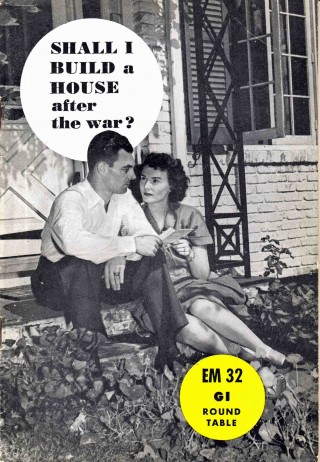 Surprisingly, the U.S. government had urged GIs to ask those questions even as the war wound down in Europe and the Pacific. In 1944, a series of pamphlets distributed to soldiers in the field urged them to discuss their post-war home, its cost and design, and if their arrangements for domestic life would be different from those their parents had known.

The questions contained biases about what the future should look like–small town America seemed to be the ideal–but the questions were thoughtful and broadly open-ended. 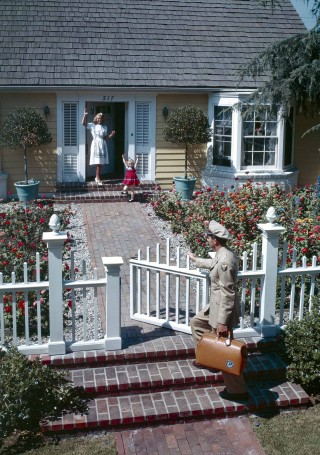 Home is where war-weary GIs wanted to be. But what kind of home?

When the answers came in the decade after 1945, they highlighted fractures through mid-century America that were real dividing lines between working-class and middle-class aspiration, between “high brow” taste and popular culture, and between conflicting authorities on living in a modern way.

Ultimately, the answer to the question “how to be new” in the 1950s affected all the things we use today, the habits of our everyday life, the look of our homes, and even our politics and beliefs. 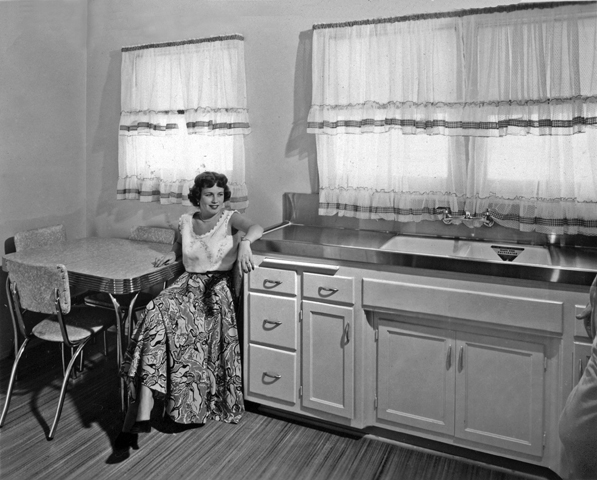 But in order to desire “the new” and to project our lives into it, we needed to see it. We needed to see what the home of tomorrow should look like, what furnishings it should contain, and how living there–with “the new” all around–would definitely be better.

And the consensus in them was that the post-war home should hold things that are practical, well-made, and unfussy; that these things–indeed the entire house–should be designed to make life more convivial, informal, and unpretentious; and that lives in that kind of home would be securely private, utterly self-possessed, and yet paradoxically more open to nature. 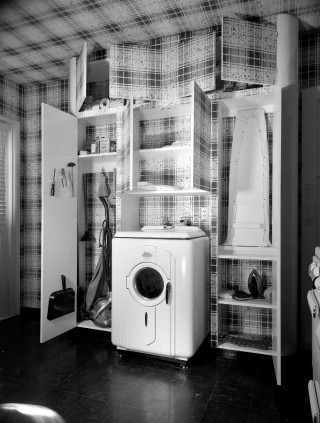 The preferred way of life–free, informal, and private–might be found anywhere, but the magazines insisted that life was fullest only among wide suburban lawns, patio decks, and outdoor grills. If “the new” was both shelter and sunshine, both privacy and liberation, then there was one place where “the new” was permanently at home. You only had to go to one of Southern California’s ranch house suburbs and see for yourself what educated taste in architecture and interior design could do with a newly bulldozed orange grove.

In glossy spreads of color photographs, the magazines (perhaps too well) presented the beaches, valleys, and foothills from San Diego to Berkeley as the ideal places for liberating manners. Southern California became the mecca for those aspiring to fully embrace “the new,” and cast off the cumbersome past.

3.
Maynard L. Parker took many of those photographs in and around Los Angeles. Parker was a prolific supplier of images to the editors of House and Garden, The Ladies Home Journal, Good Housekeeping, and Sunset Magazine. (The Huntington is preparing a comprehensive survey of Parker’s work, edited by Curator of Photography Jennifer A. Watts. The book will include over 200 of Parker’s photographs, as well as essays covering his photographic practice and his role in popularizing Southern California’s homes and lifestyle. You can explore the Parker collection at the Huntington’s website.) 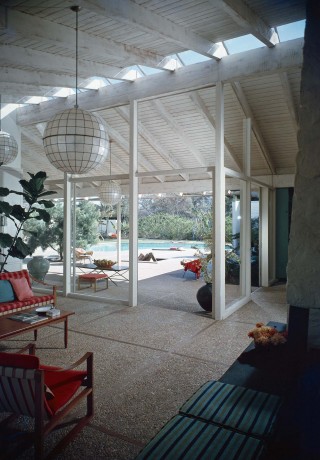 By the early 1950s, Parker had firmly hitched his career to Elizabeth Gordon, the controversial editor of House Beautiful. Gordon thought that the values of Modernism–timelessness, objectivity, and purity–offered little room for the intimacies of ordinary American life or the particularities of American places. Gordon told her readers to adopt an alternative modernity, one that married a taste for “better things” with a lively informality. And to illustrate what she meant, Gordon turned to Parker, who had a knack for idealizing in his photographs of suave living rooms and sunny pool decks what Gordon called (at various times) Better Living, The Station Wagon Way of Life, and American Style.

For Gordon and Parker, suburban Southern California provided the physical space, the spirit of experimentation, and the emphasis on youth and freedom that would ultimately repackage domesticated modernity as tract house suburbs for the rest of the nation. 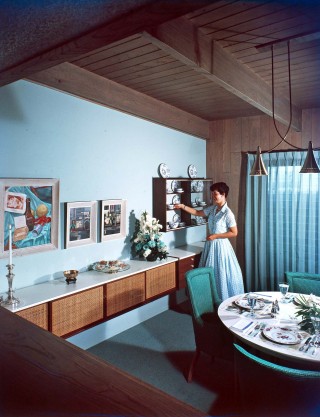 The “the new” for middle-class Americans was a safe and attainable suburban beauty.

In defending her American Style, Gordon antagonized the fraternity of European émigré architects and their students by claiming–quite wrongly–that the International Style they championed was un-American, both aesthetically and politically. In the April 1953 edition of House Beautiful, Gordon famously ordered her readers to choose sides between her solution for the problem of being new and their Modernism.

Both sides of the argument were grounded on a questionable ideology–that aesthetic values equaled moral values–but the rivalry was really about something else. It was about Gordon’s gender, her Midwest background, and her self-creation as an arbiter of modern living.

4.
A massive collaboration of editors, interior designers, manufacturers, merchandisers, architects, and developers shaped the desires and habits of millions of readers through images like those that Parker took for Elizabeth Gordon and House Beautiful. They all shared the belief that the much-handled things we live with have a shaping power over our lives. They believed that places matter. And if that’s so, many Americans through the 1950s and 1960s purchased houses, living room sets, bedroom furniture, and even kitchen appliances to resemble life in Southern California.

(You can follow a timeline of California’s impact on everyday living from the 1930s through the 1960s at California Design, 1930-1965: “Living in a Modern Way,” now showing at the Los Angeles County Museum of Art as part of Pacific Standard Time.)

We rightly celebrate Steve Jobs’ passion for design excellence–exactly the same passion for the useful and the beautiful that motivated much of the industrial design in the immediate post-war period. Consumer demand, greater real purchasing power, and expectations that “the new” would be liberating propelled the manufacture of a range of household products that were well-made, functional, and fun.

5.
By situating assemblages of well-made décor within a sheltering architectural frame and by expanding that frame outward to includes sun-filled patios and gardens, photographs of houses in an around Los Angeles in the mid-1950s projected an image of the “better living” Americans were urged to adopt. 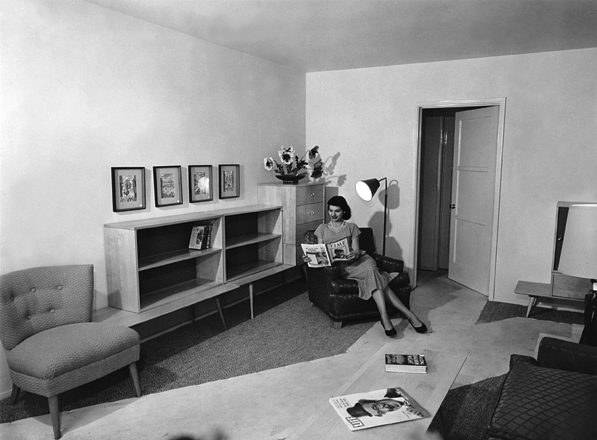 Living in a modern way was going to be unfussy, convivial, and unpretentious.

Critics–pointing to photographs of these homes and their furnishings–dismissed this expression of “the new” as pretty, even romantic. Of course, that’s exactly its unthreatening promise: that “the new,” stripped of Modernism’s zealotry, might deliver the egalitarian, ahistorical, and optimistic fabrication that Californians thought the future should be.

It was a comfortable, safe, and attainable suburban beauty. And young husbands and wives fell in love with that image of “the new” and wanted to buy more and more in order to possess it. 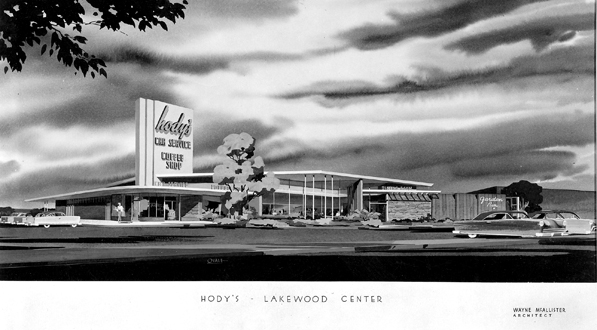 Southern California was the place where “the new” made even the ordinary seem exceptional.

Some still bitterly regret that the image was so beguiling or the selling was so successful or that the Station Wagon Way of Life lacked warnings, but, for 50 years at least, middle-class Americans looked at photographs like those in House Beautiful and saw their image of home.

D. J. Waldie is the author of Holy Land: A Suburban Memoir and Where We Are Now: Notes from Los Angeles. He is a contributing editor for the Los Angeles Times.