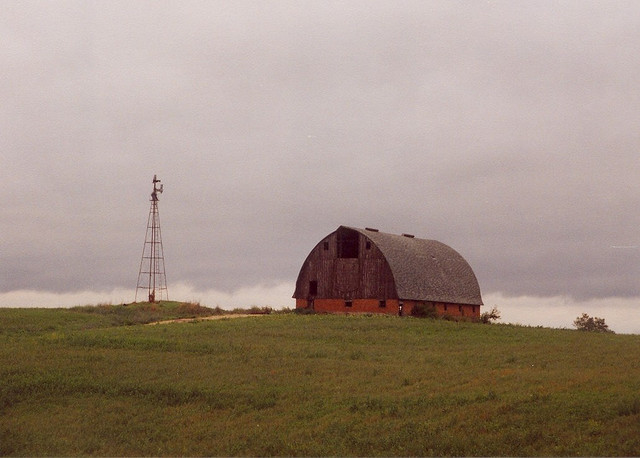 We hear so much about presidential candidates–and so little about life in the states that elect them. In “Beyond the Circus,” writers take us off the trail and give us glimpses of politically important places. Today, Iowa.

Hello. My name is Jennifer Wilson. If we were doing this in person, I’d give you a firm handshake and make eye contact. I was brought up in Colfax, Iowa, and my father taught me that this is the proper way to greet people. I have found that he was correct.

I’ve tried living in different places: New York City, Minneapolis, a little village in England while I studied literature in college. I once drove around the U.S. and some of Canada for a year, just to see. Most recently, I lived with my family in a teeny mountain village in Croatia where my great-grandparents came from–the setting for my new book, Running Away to Home, in which my husband Jim and I sold all our stuff and returned to the Old Country with our two little kids to find out what the ancestors could teach us about family and survival in tough times.

But I’ve always returned to Iowa. I am a full-time writer, a family woman, a decent neighbor, a city dweller, and the owner of urban chickens. I come from farmers and coal miners, but it’s tough to live rural in Iowa. The cities are where the jobs are.

I occasionally fish, but the lakes here are often dirty–mostly from farming runoff. Farming is the industry that put Iowa on the map, but few of us do it anymore. It’s a corporate thing now, and most of the operations are huge. Their water-polluting runoff could be remedied if there were more funding for cleanup through the state Department of Natural Resources, but that money has dwindled by more than 25 percent in the past few years, and it wasn’t much to start with. Like most Iowans, I believe this is unwise. We voted last year that any increase in sales tax should be used in part to nurture the land. More Iowans voted for that than for the governor, Terry Branstad, a Republican. He was voted into office largely because people didn’t believe the previous governor, Chet Culver, a Democrat, was doing much of anything. Iowans like action and hard work.

I do not hunt, but I am happy to eat pheasant or deer that family or friends have shot. Not that they’re necessarily shooting anything: a hunter told me recently that if he saw a pheasant now, he’d feel bad shooting it, as it would reduce his county’s pheasant population by 10 percent. He was exaggerating, but you get the idea. Our development is sprawling across the countryside, leaving less and less habitat. That means fewer pheasants.

As a writer, I travel around for a number of different magazines. Often, I’m doing this in Iowa. It’s a good place to be stuck in a car. The landscape undulates. There are corn and bean fields, small towns and pieces of timber, windmills, leaning barns. In northeast Iowa and southern Iowa, there are big tracts of woods. Along the Mississippi River, you will also see high limestone bluffs and wild backwaters, dotted by small river towns. Some of these towns are shabby antiques like Lansing or Harper’s Ferry, and others are vibrant hubs of commerce like Dubuque or LeClaire or Davenport.

These towns usually have something good to eat at the lunch counter. It’s often a neighbor who bakes the pie on the dessert list, which is written in marker on a wipe board. If you break down on the side of the road and appear to be legitimately stranded, you will get help from someone. If you look alarmingly unkempt, you will probably not get help from someone.

When I drive Iowa’s roads, I see two different places: Old Iowa and New Iowa. I’ve spent the majority of my 41 years straddling both. My hometown’s motto was “A pleasant blend of town and country.”

I grew up mostly in Old, where farms and factories and small-town storefronts were woven into the fabric of life. These institutions gave Iowans customs and habits of work that spawned American successes. So many amazing stories began here: Vice President Henry Wallace (Pioneer Hi-Bred founder); Carrie Chapman Catt (women’s suffrage leader); painter Grant Wood (who “had to go to France to appreciate Iowa”); Atanasoff and Berry (co-inventors of the digital computer). John Wayne. Donna Reed. Johnny Carson. Ashton Kutcher. No, wait.

I am raising my family in New, where, like the rest of the country, we’ve been slow to realize just how bamboozled we’ve been by going Big, selling our land and our crops and our Main Streets to immense corporations. In that small-town café, the food you’re eating is as likely to have come off the back of a Sysco truck as from the black Iowa soil. Still, there’s usually that homemade pie. Some things you can’t fake.

The tourism folks will have you focus on Iowa as a rural utopia where we put meat on sticks and brag about Twinkie frying at the State Fair. That place does exist. But the in-between is where the truth of Iowa lies. It’s like so many places that are struggling to survive as the world steps ever further away from the work of our hands. It’s hard to live in a rural place and find work, and that goes for a small Croatian mountain village just as it does for a small Iowa town. So you migrate to the city, or commute. As of the 2000 census, 61 percent of Iowa’s population was urban. The 2010 number will be higher still.

The top industries in Iowa are manufacturing, insurance, and finance. Farming ranks fifth.

I do ride the nostalgia wave sometimes. My grandpa was a farmer, and we still own farmland. I see the odd piano-key pattern of a cornfield as I drive swiftly along rural roads, and my heart swells. I love going to the Amana Colonies, the longest-running communal society in American history, where they still make handcrafted wood furniture (amazing steaks, too). I buy t-shirts that boast of Iowa’s pork products, and I get all misty-eyed at the first Des Moines Farmer’s Market of the season. I’ve been to farmer’s markets all over the world, and you really can’t beat ours. The soil is still there, waiting for us to come back to it. I believe that we will. In our own yards. Like our grandmothers taught us.

Interesting about that farmer’s market, though. I skip the $5 handfuls of fancy lettuce and head right to the spinach and lemongrass and tiny eggplants being sold by the Hmong ladies. I have no idea what they’re saying when they’re describing their wares, but I recognize their hands. They look like my grandpa’s, all gnarled and thick. They look Old Iowa.

About those Hmong: Iowa has historically welcomed war refugees, starting with Southeast Asians after the Vietnam War. This was thanks in large part to Governor Robert Ray (1969-1983), one of the last great Republicans. We’ve also got a huge population of Mexicans, who mostly come here for the backbreaking (and now, since it’s not union work anymore, low-paying) work of the meatpacking plants. The state and the federal governments have done a terrible job regulating the plants, and many of the immigrants doing the dangerous work are illegal. They overwhelm the social services in small rural counties.

Thanks to the international influx we also have fantastic Vietnamese, Indian, Bosnian and Afghan restaurants. Even the smallest towns have good Mexican food. More cultural bridging has happened in my state through ethnic food than through any political credo. It’s a peaceful way of getting to know each other.

Like all states, we have worries, but we’ve got some things going for us. Unemployment numbers aren’t too bad: we’re under six percent. That’s three percent below the national average. Wind energy is coming on: we hover between first and second in the nation for output, depending on how you’re counting. You can’t drive down Interstates 80 or 35–two major crossroads of the nation–without seeing eerily enormous wind turbine parts on their way to installation on the wind-chafed plains.

The business in the capital city of Des Moines is insurance. Because of our mid-sized status, the big chains largely pass us up, so downtown is a bastion for indie restaurants and shops. I’ve written about Des Moines dining in Gourmet and Esquire. Our own East Village is a much better place to shop than the New York City one. (I was just in the latter last week, and it was like a giant mall.) Des Moines is also newly popular. Forbes says we’re the Number One city for young professionals. Men’s Journal called it the best place to live on the Silicon Prairie and one of the 18 coolest places to live in America. Iowa City is one of only five UNESCO World Literature Sites.

Thanks to the state’s independent streak, same-sex couples can get married in Iowa. There was backlash. One obsessed conservative (who incidentally tried to run for governor several times but repeatedly lost in the primaries) has made it his life’s work to unseat the Supreme Court justices who paved the way for same-sex marriages. But Iowans worry more about good jobs.

The things that have carried over from Old Iowa to New Iowa involve unmeasureables, things like strong character, honesty and strength of will. It’s still the kind of place where if someone gets seriously sick, a whole town will throw a fundraiser. Or several. It’s still a small place where someone with a little gumption can make a big impact. A place of independent minds and thoughtful humans. Where we don’t tend to think the one who speaks the loudest must receive the most attention.