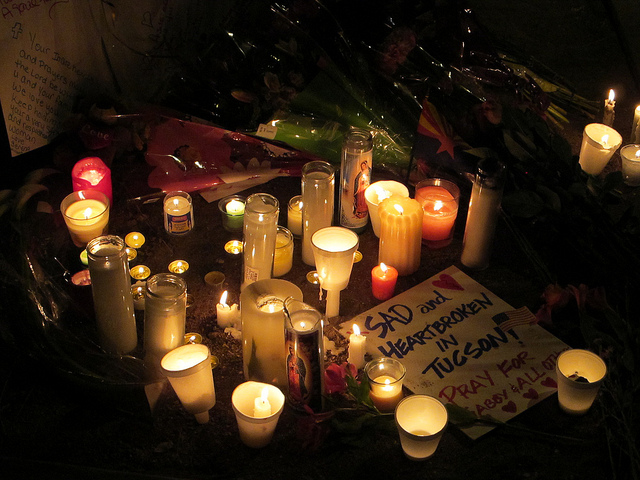 The question has long intrigued social scientists. The criminologists James Q. Wilson and George L. Kelling advanced the famous “broken windows” theory in 1982, postulating that the breaking of a single window in an abandoned building encourages the rapid breaking of all the windows because a certain cosmic permission has been given for vandalism.

Social context is a force that influences individual decisions more than we recognize. The riots that plagued Britain’s suburbs in August were blamed on unemployment and government cuts that left young men with no place to work and little hope of finding anything better. People living in Rwanda in the months prior to the 1994 genocide remember an eerie feeling cloaking everything, a pervasive sense that “something was going to happen.”

On the 48th anniversary of the JFK assassination last November, columnist Frank Rich pointed out how embittered the city of Dallas had been in the months before the presidential motorcade ran down Elm Street–and how a fame-seeker like Lee Harvey Oswald might have imbibed the local hate and seen himself as the hero who could release all the built-up civic pressure.

The question of how geography shapes the psyche is worth examining again as the anniversary of the January 8, 2011 Safeway shootings in Tucson, Arizona, draws closer. The months leading up to the attempted assassination of U.S. Rep. Gabrielle Giffords were unusually paranoid ones. I saw the tension up close, because Tucson is my hometown, and I worked on my friend Gabrielle’s campaign as a speechwriter, watching as her face was all over television and outdoor ads portraying her as the embodiment of a government that was wrecking the local economy. There was a feeling in Tucson that I did not recognize.

Much has been made of the website put up by Sarah Palin’s political action committee (with target markets over the districts of vulnerable Democrats, including Gabrielle’s) and the newspaper ad for her opponent calling on his supporters to help him shoot an M-16 at a fundraiser. I think these gestures are unimportant in themselves–in dubious taste but certainly not the motivating reason why the paranoid schizophrenic Jared Loughner brought a gun to the Safeway with the intention of assassinating Gabrielle.

What they were, though, were symptoms of the larger causes of Tucson’s unease: a fragile economy, a fear of illegal immigrants, a toxic political culture that favors passion over reason, and the disconnected neighborhoods of newcomers where loneliness festers and lack of concern for one’s neighbor becomes a habit. This is the environment in which the punitive and ridiculous law SB 1070 was passed, requiring local police to demand the immigration papers of anybody they stop who appears to fit a suspicious profile–such as a Latino who happened to dress down that day.

Loughner was suffering from a grave mental illness, but he was not living in a world made entirely of his own delusions. He could still hear and see what surrounded him, and those surroundings helped him formulate a plot against a specific target: Gabrielle Giffords, who, besides the president, may have been the most reviled public face in Tucson that year. The slime was directed at her personally, but it was only a convenient channel for the fear that the American dream was lost and that a crisis was at hand.

Studies of schizophrenics have revealed that their hallucinations are shaped and even governed by the culture that surrounds them. What Loughner saw of public life in Tucson at the nadir of his illness–when he was being kicked out of his community college for bizarre and threatening behavior–was one of general fear and outrage, with one solitary woman, her face in constant media view in sinister cast, being branded as the responsible party for all the misery.

Dismissing Loughner as a random “black swan,” free of all antecedents or influences, is worse than facile or lazy. It is actively dangerous, for it allows us to ignore the contributing human context, which is something we can change.

Small windows were being cracked that year in Tucson. Permissions were being unwittingly given. Gabrielle’s office window was broken out by a pellet pistol in March after a series of angry “town hall” meetings on the healthcare bill. Gabrielle confessed to her husband that she feared somebody would bring a gun to a public event and shoot her.

Ten years before Wilson and Kelling advanced their broken windows theory in the pages of The Atlantic Monthly, the literary scholar Rene Girard wrote a more obscure study entitled Violence and the Sacred in which he examined the atavistic forces behind the outbreaks of violence against innocents in otherwise stable communities throughout the globe.

“Girard believes a long series of primal murders, repeated endlessly over possibly a million years, taught early humans that the death of one or more members of the group would bring a mysterious peace and discharge of tension,” wrote the scholar Leo D. Lefebure. “This pattern is the foundation of what Girard calls the surrogate victim mechanism. Often the dead person was hailed as a bearer of peace, a sacred figure, even a god.”

Tucson was abruptly sobered by the bloodshed at the Safeway. Flowers and cards were showered on the lawn outside the hospital where Gabrielle lay, as well as outside the fake Italianate grocery plaza–“La Toscana Village”–where she was shot. The mourning over this chilling, pointless act brought the city together in a way that would have been unfathomable in the ugly days of the 2010 Congressional election. It was almost as if, deep down, we remembered we share a destiny with each other. And we all wondered quietly if we could have somehow done more to prevent our civic air currents from massing into thunderclouds.

Tom Zoellner is the author of A Safeway in Arizona: What the Gabrielle Giffords Shooting Tells Us About the Grand Canyon State and Life in America. He is an Associate Professor of English at Chapman University.