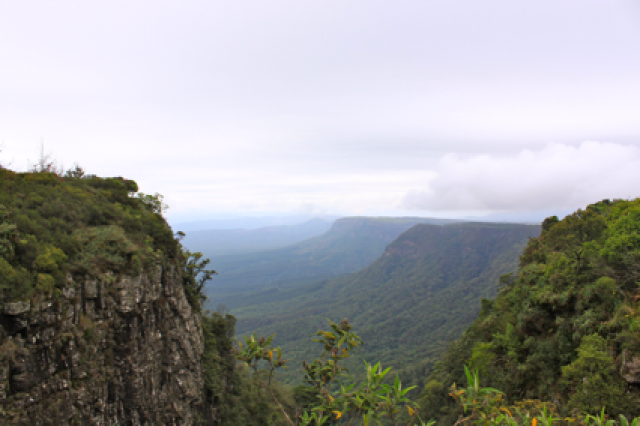 When we see glimpses of Africa, it’s usually because of a conflict, a safari, or a charity drive. Lanre Akinsiku, a writer from California, is spending a year traveling around Africa, going to places less visited to capture everyday moments.

I was the 20th person on a 16-passenger bus out of Graskop, sandwiched between a giggly old man clutching a can of beer and a shy teenager who wouldn’t shut up. I’d been in town exactly 19 hours, which is an eternity in Graskop time.

Graskop is a delicate South African town in the middle of nowhere that is overrun by a sprawling, emerald green forest and wide-eyed tourists who come to take as many pictures as they can before moving on to somewhere more interesting. As part of a year-long, 14-country trip through Africa, I decided to come here because, well, everyone else does. 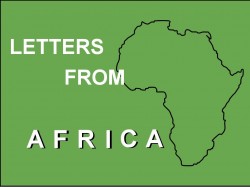 I woke up at 6:00 a.m. for a hike to God’s Window, a vista overlooking a nearby canyon. The guidebook said it was a five-kilometer hike to get there, although it turned out to be a seven-kilometer hike that ended after two kilometers when I took a bus the rest of the way. In 20 minutes, I hiked to all of the vistas at God’s Window, took photos to show my Facebook friends, and rode another bus down the mountain. A timid fog covered only the tops of the trees, and, if I’d stuck around a little longer, I probably would have written something about how ethereal and mystical the scenery felt. After I packed my bag at the hostel, it was 11:30 a.m.

I couldn’t miss that bus out of Graskop. I was supposed to be in Swaziland before nightfall, and the trip required a series of transfers that likely would take the entire day. To get to Swaziland, I needed to take a bus to Nelspruit, a much bigger middle-of-nowhere South African town. But the only way to get to Nelspruit from Graskop is to go first to Hazy View, a 30-minute ride away through more winding, emerald-green forests.

Before I could grab my seat on the bus, an old man began speaking to me. He thought I was South African.

“How can we talk then? I don’t speak English well,” he said. “Another language?”

A young man was speaking to me now. He added something to the end of his question, but it was trampled under the whine of the bus’s engine.

“Yes,” I said. “California.” I opened my eyes, slowly. The young man had small beads of sweat ready to launch themselves down his forehead.

“I’ve been to the Czech Republic, Spain, Italy. I’ve been to many places. I’ve always wanted to go to the U.S.”

“It’s very nice there.” I wished he could see the period at the end of my sentence, the finality of it.

Explaining the whole writing thing would take too much time. “I’m a painter.”

“Ahh, I am too! I also like house music. I make my own songs. They call me DJ KB Blaze. Would you like to hear some?”

The ride was smooth; you never know what kind of driver you’re going to get when you hop on a South African bus. Sometimes the driver does everything right: he doesn’t pass when there’s a hint of danger, drives at a moderate speed, moves over speed bumps carefully. Other drivers drive as though they don’t care whether they live or die. We had the former. I closed my eyes again.

“Are you whispering at me?!” the old man shouted. The entire bus, front to back, rippled in laughter.

“These ladies,” he pointed to a few women sitting in front of us, “they know English better than me.” He smiled, and I could see his tongue through the window where his two front teeth should have been.

“So how is it to live in Texas?” DJ KB Blaze asked.

“It’s very nice. Hot.” Normally, I’d correct him and explain that California and Texas could be two different countries. But that would take three or four minutes that I could use to sleep.

“Someday, I would like to go to the U.S. That is my dream. Maybe I can visit you there.”

“Absolutely. That would be cool.”

He pulled out his phone, again, and I recoiled at the thought of listening to more music. “Here, add me on Facebook,” he asked.

I added him and made a mental note about “the true meaning of globalization.” Eleven minutes to go. I closed my eyes.

“Are you well?” the old man shouted, giggling again, and tipping his head back to drain whatever beer was left in his can.

He laughed and waved his finger, “No no no.”

“Do you have a sketchbook?” asked DJ KB Blaze. “I’d like to see some of your drawings.”

I opened my bag, shifted a few books around, and pretended to be disappointed that I couldn’t find my sketchbook. “Nope, don’t have it.”

I closed my eyes. Eight minutes to go.

“You like books?” asked the old man with the empty beer can.

I closed my eyes and heard the old man crush his can. He started talking to me in a South African dialect, completely abandoning English, laughing at his own jokes.

Three minutes left. All hope of my nap was lost. I smiled and laughed when the old man with no front teeth laughed, and watched the last of the forest melt away.

“What will you tell people about Graskop when you return to America?” asked DJ KB Blaze.

I hadn’t thought about that. I was too busy hiking and taking pictures and getting the hell out of Graskop to think about what I thought about Graskop.

“That it was pretty, I guess. Very green.” I knew I sounded stupid.

“OK, well maybe I will visit you in Texas.”

“Sure,” I said. We all jumped off of the bus, they in separate directions, and me, off to Swaziland, with a camera full of pretend memories.