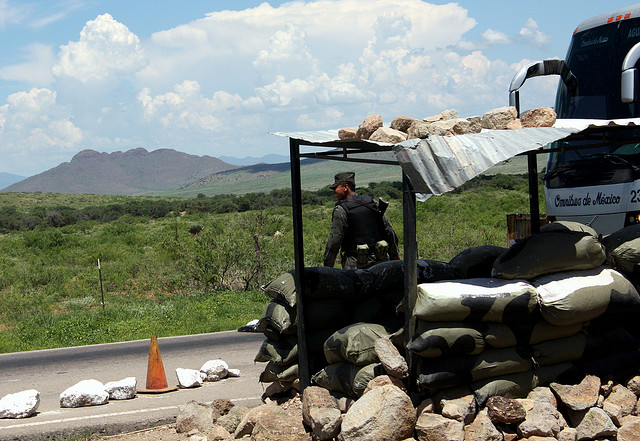 On June 8, 2005, Alejandro Dominguez, the head of the chamber of commerce in Nuevo Laredo–a busy Mexican city on the Texas border–took office as the city’s chief of police. He was an outsider to law enforcement, brought in by the mayor as an honest broker. Six hours later, he was dead, shot 40 times as he walked to his car. Five days later, Mexico’s then-president, Vicente Fox, sent in the army and national investigative police, who arrested the city police force en masse, taking all 700 of them into custody, pending investigation.

As Ioan Grillo’s excellent recent book El Narco: Inside Mexico’s Criminal Insurgency reminded me, this “Mexico Seguro” crackdown, as Fox called the operation, was the first stroke of the ongoing Mexican Drug War.

Grillo is one of many journalists struggling to create a coherent narrative for the troubles down south. As the Economist correspondent in Mexico at the time, I remember arriving in Nuevo Laredo on the afternoon of June 14, 2005. I would like to tell you that the place was embroiled in chaos, or that you could sense the tension stemming from the federal intervention. But everything seemed, in a word, normal. If you hadn’t known that the city’s whole police force had been arrested a few days earlier, you wouldn’t have realized anything was wrong.

I wrote to my editor at the time that the interesting question wasn’t so much the nature of the violence (which I thought had been scaremongered) but how one sets up an effective police force. Was the biggest problem with the security forces their corruption or their incompetence? That same disheartening question arises in all too many troubled places around the world, and in Mexico it remains an open issue, six years on.

Notwithstanding “Mexico Seguro,” the violence continued to simmer for the next year and a half, and Mexico went through the tumultuous presidential election of Felipe Calderón, the current president, who is entering the last year of his (constitutionally limited) term. When Calderón took office five years ago, in December 2006, his first major initiative was to send federal forces to his home state of Michoacán, much along the same lines as Fox’s mission to Nuevo Laredo.

At the time, his decision hardly registered. It seemed more like a political trick than the beginning of anything of lasting consequence. Calderón had squeaked into office, and everyone said he was sending in the army to take the disputed election out of the headlines. But the mission ignited a powder keg. In 2001, 1,080 people died in drug-related killings in Mexico, according to the national human rights commission. By 2006, this figure had climbed to just over 2,000. It doubled in 2008 and again in 2010, when the newspaper Reforma counted 11,583 drug-related murders. That number was surpassed in November of last year. As of December 15, 11,817 people had been killed, of whom 1,046 had been tortured and 574 decapitated. Last year, 542 policemen and 47 members of the Mexican military were killed.

What caused this dramatic increase in violence? The flow of drugs from Mexico hasn’t changed dramatically, by the best estimates (which Grillo describes, aptly, as “misty, doubtful numbers passed off as statistics”). Calderón argues that, had he not taken action, the violence would have been worse. His critics say the violence was provoked by Calderón’s use of the army.

There is much debate in Mexico about the share of the violence being suffered by innocent bystanders. In late September, 35 bodies of presumed drug traffickers were dumped on a busy street in Veracruz during rush hour. Two severed heads were left in a bag across from the Defense Ministry in Mexico City on October 3. Some 279 police officers were arrested across the country in early October. The basic dynamic of prominent symbolic killings and widespread corruption in law enforcement is precisely the same as it was in Nuevo Laredo in 2005.

In El Narco, Grillo attempts to find the causal turning points of the war. He fails to find them, but he asks the right questions. Why, for instance, did things blow up in 2008? Grillo offers two theories. The first, which is favored by the Mexican and American governments, is that the violence was a result of government pressure on all the cartels. The second, which is favored by many Mexican observers (particularly political opponents of Calderón), is that the federal government effectively took the side of the Sinaloa cartel.

It is easy to come up with ideas for why much of the unrest happened in Ciudad Juárez and not elsewhere, but, most likely, Juárez just got unlucky. The Sinaloa cartel may have been more effective than its rivals in co-opting elements of the federal law-enforcement apparatus. But, as Grillo says, the “cock-up” theory makes more sense than a calculated decision at the top to take sides.

“Calderón may be honest,” he writes, “but he declared war on drug cartels with a rotten state apparatus, one that he could not fully control.” This is true. But it doesn’t, as Grillo notes, answer the puzzle of the violence.

“What do they [drug traffickers] stand to gain by such bloodshed? Whom are they fighting? What do they want?” Grillo asks, but does not answer. The question of what is causing the violence has lost meaning. The violence causes itself.

In regular news coverage, so much of the discussion centers on notional constructs that do not exist in the world as they do in our heads. “Cartels don’t exist,” says a Colombian defense lawyer in Grillo’s book. “What you have is a collection of drug traffickers. Sometimes, they work tighter, and sometimes they don’t. American prosecutors just call them cartels to make it easier to make their cases. It’s all part of the game.”

The violence in places like Juárez is often described as a struggle for control of territory. But this is a platitude, as if it were a game of Risk. You’ll often see color-coded maps of Mexico, with one area shaded for the Sinaloa cartel, and another for the Zetas. These maps are entertaining–like the elaborate ones showing “drug smuggling routes” with arrows arching and thrusting northward. But there might as well be one big arrow going from south to north. As the head FBI officer in a U.S. border town tells Grillo, “Forget about folk stories of kingpins and carefully drawn maps of cartel boundaries.”

Although Calderón would never admit it, a logical triage for a Mexican president today is to cease worrying about the flow of drugs and to try and return to the status quo ante–a vigorous and healthy cross-border trade in illicit substances, with some acceptable level of corruption, but with much less violence. How can this be attained as a policy aim without appeasing violent and deranged criminals? It is not an explicitly acknowledged aim of any of the aspirants to succeed Calderón in July’s upcoming election, and yet it is a possible outcome.

The discussion around the drug war’s future often comes down to ideas for restructuring the Mexican justice system. Various police forces will be consolidated. Better training will be provided by the U.S. New recruits will be “vetted’ through some new process. Prosecutorial offices will be bolstered. But how can you vet people against the possibility that they will accept a bribe when the lives of their children are threatened? The tremendously lucrative nature of the drug trade means that just about anyone is potentially corruptible. When 35 officials from an elite organized crime unit were arrested in October 2008, authorities said the two most senior corrupt officials–the deputy director of intelligence and the technical coordinator–were getting $450,000 a month from the Sinaloa cartel. And the alternative to such extravagant paydays for a targeted public official isn’t typically to walk away with your integrity intact, but to have your family threatened with deadly violence.

In the long run, any hope for change rests on the gradual legalization or, at the very least, decriminalization of some drugs north of the border. Fox (along with former presidents of Colombia and Brazil) has become an increasingly outspoken advocate of this since leaving office, while Calderón hints at it with cryptic phrases, arguing that the U.S. must “do more to reduce the profitability” of drug sales, while stopping short of outright calls for legalization.

Optimists now point to Colombia, which is a much safer place than it was 10 or 15 years ago. But the production of cocaine does not appear to have been significantly lowered. The reduction in violence in Colombia comes from the political settlement of an ideological civil war–something that is not part of the equation in Mexico. In the next year, as Calderón prepares to leave office, and as his successors jockey for position, there is, Grillo says, “the possibility of a wider war.”

I doubt this outcome. As Grillo himself says, the conflict today is “everywhere and nowhere.” The same maddening diffuseness that makes the conflict so difficult to snuff out also makes it unlikely to escalate into an all-out war in any conventional sense.

The violence may eventually decline, but it will be because the fire burned itself out, not because effective fire-fighting tools were discovered. Richard Nixon’s goals of the “unconditional surrender of the merchants of death who traffic in heroin” and “the total banishment of drug abuse from the American life” will never be met. But the violence, being its own cause, will also be its own solution. When there are no more rivals left to behead, the surviving capos will turn back to smuggling, and the families of Alejandro Dominguez and nearly 50,000 other victims will continue to ask why they died. No one will have a good answer.

Konstantin Kakaes, a former Economist correspondent in Mexico, is a Schwartz Fellow at The New America Foundation in Washington, D.C.