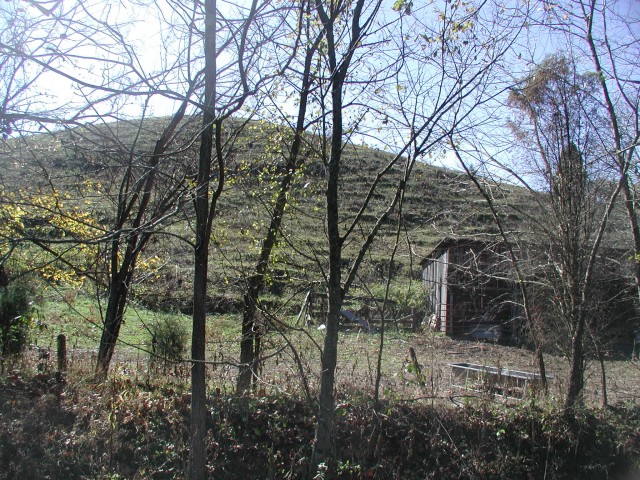 We hear so much about presidential candidates–and so little about life in the states that elect them. In “Beyond the Circus,” writers take us off the trail and give us glimpses of politically important places. Today, Tennessee.

Lately, I’ve been thinking a lot about what it meant to grow up in rural East Tennessee. I live in a small community about ten minutes from the farm my parents brought me home to after I was born. Forty acres of hilly pastureland bordered by thick evergreen woods with a creek running through. On cold days I think of all the winters I’ve spent here, including the first one I remember, of standing at the window, watching my dad going out in his red stocking cap and blue vinyl coat to take pictures of a deep snow that had just fallen.

As a child I always wanted to be outdoors, no matter the temperature. Sometimes, I would go with my mom to work grading tobacco at a neighbor’s farm down the road. Inside the shadowed barn, the dust from the wilted brown leaves coated my throat, and the air was even colder than it was outside. At home I would walk back and forth along the icy creek, daydreaming under a cloud of chimney smoke, until my wet shoelaces thinned and finally broke. I’d stay out so long that when I went back inside I was snow blind for a while, everything looking green.

We spent a lot of snowy days indoors, too. We’d sit by the wood stove eating baked potatoes my mom had cooked in the ashes. For supper we ate the preserves she’d canned during fairer weather: green beans, pickled beets, and blackberry jam. Sometimes, after my brother and sister had gone to school, my mom and I would take a trip to a department store in town called Sky City, lingering in the café, while outside the blustery wind blew dead leaves against the plate glass window. I would eat a hot dog, and she would eat a hamburger while we watched our soap operas on the black and white television set at the end of the counter. Or we would spend hours warming up at the library in Rogersville about fifteen miles away, the tallest building I’d been in at the time, columned brick with high ceilings. I loved the dirty white light there, the musty smell of yellowed pages.

But yesterday, when the temperature climbed to 70 degrees, as it does here more and more often even in late winter, it was the summers I remembered. We’d walk barefoot down Courtney Road, cracked and potholed with cornfields rustling high on both sides, until we got to the burning hot railroad tracks. Then my big sister would carry me on her back, all the way to the trestle over the muddy waters of Bent Creek, where I could look down between the gaps in the cross ties and see our neighbor’s spotted cows wading. I seldom wore shoes when it was warm. Even when we rode out to the end of the road for lawnmower gas, I left my grass-specked flip-flops behind in the yard.

Although we were ten miles from town and surrounded by pastureland–my parents’ 40 acres and hundreds more belonging to the neighboring dairy farm–we had some nearby stores. One was Shipley’s Market, a little white house with a round thermometer hanging beside the screen door. I’d get orange popsicles and push-ups from the mildewed freezer. Shipley’s closed after the owner died, but his wife, a seamstress, still lives there. When there are weddings or other occasions that require dresses, women and girls go to her to be fitted among dusty shelves and empty boxes. I went there when I got married, her measuring tape whisking around the waists and hips of my bridesmaids. There was also Eddie Pettit’s, where you could rent movies and buy hardware, and Wisecarver’s, where they sold Panama Jack T-shirts and neon sun visors alongside bread and milk. Our produce was mostly homegrown, but what we didn’t plant we got from the Mater Man. I didn’t know his real name until I was an adult. We would park in his driveway, and he would bring out grocery bags of tomatoes and cucumbers. There was an apple man, too, named Mr. Purkey, who’d let me pick the apple I wanted from the bushel baskets in the bed of his truck.

Almost all of my earliest memories are good ones. Not just because of how my mom and dad raised me, but because of where they raised me. I wasn’t afraid to cross the railroad trestle over Bent Creek, because it felt like nothing bad could ever happen to me. Generations of my family were born there and still lived within shouting distance.

But some things have changed over the years. I don’t walk barefoot down Courtney Road anymore. Where corn once rustled on both sides of the pavement there are now industrial chicken houses, their stench drifting for miles. The stores where we bought lawnmower gas stand vacant, their weedy lots sprinkled with glass; my parents have to travel to town now to buy their bread and milk. The Sky City department store went out of business ages ago, replaced by a chain grocery store. Every day, it seems, another shop or factory is closing. Now a coal gasification plant is coming to town, and people are too desperate for jobs to worry about the pollution.

It’s not just the landscape that’s changed. As I got older, my feelings about home became harder to sort out. As a little girl daydreaming under a cloud of chimney smoke, I never realized that you can feel like you belong and don’t belong at the same time. In school, I didn’t have much in common with my classmates. I was more interested in the world outside the mountains than they seemed to be. I liked to paint and to write stories. Later, I couldn’t relate much to the mothers of my son’s classmates. I thought they were too conservative, too closed-minded.

I didn’t make friends at the printing company where I worked for a while either. The other women had been there for decades and seemed content to stay put. I thought of moving someplace where the politics, values, and interests were more like mine. I still think about it. But then I pass a tobacco field or a stretch of woods or a pasture hill and feel a pull in my chest strong enough to take my breath–a need to get out of the car and stand with that land under my feet. In those moments I know that I was born here for a reason, that I’m exactly where I’m supposed to be. There’s something deeper than roots holding me in East Tennessee. It’s love, and love is complicated.

Amy Greene was born and raised in the foothills of East Tennessee’s Smoky Mountains, where she still lives with her husband and two children.