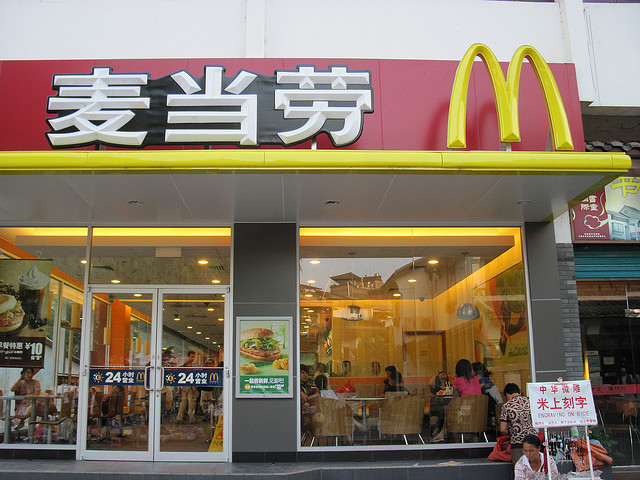 Hard to believe, but I am a minor celebrity in China. For two weeks, I have had unrelenting calls from reporters, strangers recognize me on the street, and my media nickname, “French Fry Brother,” has become a household name. It’s all very strange, especially considering how mundane a deed has sparked all the attention. It’s not like I intervened in a mugging or saved someone from drowning. No, I merely gave away some fries.

But let’s not get ahead of ourselves, for there is a backstory to my fried brotherhood.

I am a recent graduate of Arizona State University, near completion of a study abroad program in Nanjing. I arrived last August in this storied ancient capital, and began taking courses in Chinese language and in Mandarin pedagogy at Nanjing University.

One night last October, I went to a bar that caters to ex-pats (exorbitant prices by local standards) with some friends.  That night the bar was so crowded that there were about twenty of us sitting and standing outside. During lulls in conversation I watched everything that was going on. Our crowd of young foreigners milled around laughing, smoking, and enjoying ourselves. A beggar went by; he might as well not have existed for all the attention we paid him. Another man–a Uighur from East Turkestan, aka Xinjiang Autonomous Prefecture–pedaled up on a bicycle, pulling a trailer on which stood an enormous fruitcake.

“Watch out for that guy,” said one of my friends. “He hustled me the other night.” It’s not an uncommon occurrence; many Uighurs in eastern China pull the same trick. The seller will cut a much larger slice than you requested, then threaten you when you balk at the price, leaving you with the loss of eighty yuan and a lifetime supply of fruitcake.

I sympathized with my friend. But looking at this man set off an unexpected train of thought. It occurred to me how pathetic it is to make a living by deceitfully hustling fruitcake, and how much it must eat away at his own sense of dignity. Did he have a family to support? And weren’t Xinjiang’s Uighur people suffering from bouts of ethnic strife associated with Beijing’s forceful assimilation? Not everyone has the range of choices that I have, simply by virtue of being born with certain traits into a certain family in a certain country. And here I was in Nanjing, in a program designed to usher me into the ranks of international professionals, being subsidized by Mom and Dad and Uncle Sam. And in a few months I could move on to bigger and better things, and this man in front of me would still be in Nanjing hustling fruitcake. I tried to forget about it and just enjoy myself, but couldn’t. I called it a night early and went home. 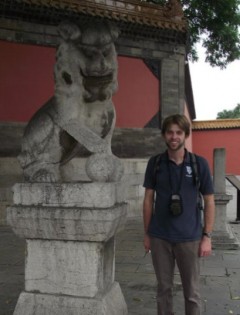 Since then, something has been different. I started to notice how the same money I’d blow through at expensive expat hangouts suddenly felt more precious when a beggar asked for it. My contempt for Chinese people’s conspicuous consumption was punctured by an admission that my whole lifestyle can itself be seen as exploitative and unsustainable. The clear advantages of being a white American and affluent–which I’d never fully appreciated until now–generated an awareness of how very little I deserve all that I have. Slowly but surely, each of my own moral judgments was transforming into a finger pointing back at me. My life is a tangled knot of privilege, hypocrisy, and self-righteousness. Not only is it awfully pretentious of me to think I can help “save the world”–I can’t even redeem myself. I was gradually led down to a choice between utter absurdity and faith in Christ–the one thing I’d always said I could never believe. At some point, around Christmas, I admitted my own crookedness and accepted the gift of redemption. From that moment began the more-than-lifelong journey of learning that life is not all about me.

And so it was against this backdrop that my life, newly fortified with religious faith, collided with that of Mrs. X (unnamed here for the sake of her privacy). She’s an octogenarian who’s fallen through the cracks in the country’s economic growth. She often begs for money and food outside a McDonald’s on Guangzhou Road in Nanjing, reclining barefoot against an AC unit and waiting silently. She hasn’t always been this way. Up until last year she was living in her hometown, a rural village in Anhui province. Then her son, who is disabled, lost his employment, and her daughter lacked the means to support her. Mrs. X came to Nanjing to get by the only way she can. A chronic weakness in her legs makes movement difficult, yet she gets to the McDonald’s and back most days (I don’t know where she lives) with the help of a few other poor folks from home. She is stoic about her situation and doesn’t complain about it. But then, she’s already lived through a Japanese invasion, a civil war, an engineered famine, a Cultural Revolution, and the economic subversion of her livelihood.

The millions of people in Mrs. X’s situation are a source of discomfort, often denial, in a country undergoing spectacular economic growth. Apathy towards people in need has been a hot topic in China since last October, when a little girl in Foshan was run over by a truck and ignored by 18 passersby before being rescued by a trash collector. The death of “Little Yue Yue” encapsulated what many Chinese people fear is a severe lapse of traditional values and assumptions about human nature.

And so it happened that, on a hot Saturday afternoon earlier this month, Mrs. X as usual was by the AC unit in front of the McDonald’s on Guangzhou Road, and I passed by, with Saint James’ rebuke to passive “dead faith” on my mind, and noticed her there. A minute later we were eating fries and talking. I asked about her home village. She took out her identification booklet and handed it to me; it was dog-eared and bottle-green, with her information scrawled out over a few short lines. The black and white photograph showed a middle-aged Mrs X, healthy, smiling at the camera, with just the same style of Mao jacket as the one she was wearing that Saturday. She told me about her family and her life begging in Nanjing, then handed back the fries unfinished. “They’re not very good,” she explained. I poured her some water; then we chatted about the weather for a couple of minutes before it was time for me to go play soccer with friends.

Meanwhile, an anonymous netizen passing by saw the two of us, took some pictures, and posted them online. By noon the next day they had already caught the attention of several friends and a reporter. I reluctantly agreed to do an interview, as did Mrs. X that afternoon. That the fuss had to do with my foreignness was obvious enough, but I was still bewildered by the scope of the attention.   Perusing the vast trail of online chatter, I began to get a faint idea of why I–and not Mrs. X–was now on fire. Comment after comment highlighted feelings of shame, asking, “Why isn’t the Chinese granny feeding the foreigner instead of the other way around?” (Probably because she’s over eighty years old, is penniless, and has a medical condition!) I had unwittingly stepped onto fraught terrain. I was celebrated for my small act, but it was a celebration tinged with shame.

Becoming accidentally famous for 15 minutes–my deed, or rather the reaction it drew from Chinese netizens, got picked up by newspapers and cable news shows back home–has forced me to question my own actions and think about how to do things better. Getting shoutouts from millions online has tempted me to forget that I’m fundamentally no better than anyone else. I did nothing exceptionally courageous or redeeming. I didn’t even make life materially better for Mrs. X; French fries were apparently the last thing she wanted or needed. But I did recognize her presence and her humanity, and that’s something China’s broader society is struggling to do.

She’s still there, outside the McDonald’s most days. I feel I should do more for her but am not sure how to go about it. At this point, I need to come to terms with my failure to make a real difference in her life. And if it takes foreigners to break widespread social denial, I wonder what I ought to start seeing differently when I return home, where I will not be an outsider, but a member of the complacent majority.

Jason Loose, a native of Thousand Oaks, graduated from Arizona State University in May 2012 and is planning on pursuing a career in secondary education.