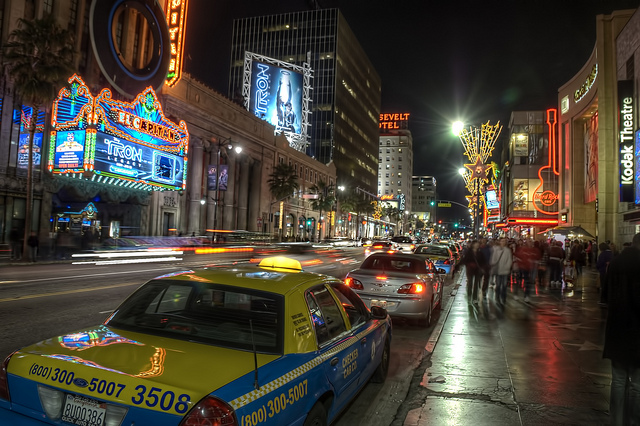 “I hate drunks, they are so obnoxious. I should know, I used to be one …” –Mary Carol Reilly on the fundamentals of being a cabbie

She used to lie in bed at night, a 10-year-old kid imagining that one day she’d be a movie star. Though she never quite got the role–getting just close enough to feel the heat of the kliegs–the Mary Carol Reilly bio-pic is epic.

“The dreams helped me get to sleep,” said Reilly, a native Baltimorean whose family was riddled with alcoholism, mental illness, condescending haves, and subservient have-nots.

She became a novice with the Sisters of St. Cyril and Methodius in Pennsylvania and a Romper Room lady in Chicago. Nationwide, Reilly hammed it up in commercials with the Pillsbury Doughboy, the young Jodie Foster in a spot for detergent, and Mrs. Olsen of Folgers instant coffee fame.

She even met America’s first couple of 1972–Archie and Edith Bunker–during a brief walk-on spot on the All in the Family spin-off, Maude.

She taught school in China, helped with post-Katrina relief in New Orleans, rebelled against Vatican doctrine by gently informing her class of Catholic seventh graders that good people of different sexual orientation are everywhere, maybe even behind the desk at the front of the room.

And then there was the time she was held-up at gunpoint, playing late-night poker with a bunch of high-rollers in Baltimore’s Greektown neighborhood.

“I was the only woman in the room, and they told everyone to drop their pants,” said Reilly. “I told them they’d have to kill me first.”

During one of Los Angeles’ darker epochs, when the colors of psychedelia drained into a single, blood-red hue–she got tossed out of the Manson trial for sobbing too loud and too long during the gruesome testimony of Linda Kasabian.

“I had more nerve than sense back then,” said Reilly, who grew up walking distance from Pimlico Race Course in the early ’50s and often snuck in to see the horses. Now nearing 70, she looks back on her escapades as a Southern California 20-something and marvels at how easy it all seemed.

“I literally drove across the country, turned right on Hollywood Boulevard and found my sweet furnished apartment at 1738 Winona Terrace,” she said. “My first real job before I was ‘discovered’ was at Norm’s Restaurant at Sunset and Vermont. Their specialty was steak and eggs for $1.99.

“Of course I told everyone I was an actress and wouldn’t be working there very long. They’d heard those delusions of grandeur before and told me to just serve the food. Every other waitress and busboy was waiting for their big break.”

But success broke for the irrepressible Reilly. Just weeks into her waitressing career she was introduced to Herb Tannen–now a fine artist in Malibu–and booked the first three gigs the agent sent her out for. Her round and freckled face played the camera like a kid playing tag in the backyard: fresh, happy, innocent, and eager.

Mary Carol wasn’t thin and she wasn’t beautiful, but she looked like the people who flew United Airlines–except she did so on-screen with beaming smile and full nun’s habit–or like someone who might need to drop a few pounds with a Carnation breakfast drink.

The worries of home–widowed, schizophrenic mother, an equally if not more disturbed younger brother, and a rusting city ravaged just a year before by riots following the King assassination–seemed one million and three thousand miles away.

“All my life, I always wanted to be somewhere else with someone else doing something else,” she said. “But when I got to California, I was home.”

Yet Reilly’s rocket ship ride would end in 1969 just as quickly as it began.

Brother Johnny, the charismatic and beloved baby of the family, had been in and out of institutions, once after threatening Reilly when he saw her hugging a black friend. Johnny was, said Reilly, confused–“emotionally hurting”–and asked her to come home.

Mary Carol demurred. She was afraid of Johnny, and she was having too much fun in L.A.

“When Johnny called, it was the height of my first month of success, and it had gone to my head,” she said. “I really believed that the little girl from Baltimore had arrived.”

Not long after Reilly turned down her brother’s request, Johnny went upstairs while his mother was watching TV and drowned himself in the bathtub. To get inside the locked bathroom, their mother, also named Mary, crawled out onto the roof from another room and climbed through a window. Johnny was 24.

It was October. In the previous months she’d lost her virginity to a guy she’d met in acting class–still unaware, at 27, that her feelings for women were more than friendship. She was on her way to scoring a baker’s dozen of national commercials and, she says, “I was laughing all the way to the bank.”

Now she had to fly home. On the porch of their mother’s Windemere Avenue cottage near Baltimore’s fabled Memorial Stadium, Mary Carol and older brother Eddie mourned their sibling with vodka. Lots of vodka.
Reilly threw up in the bushes and believes that this was the moment her alcoholism bloomed. The disease quickly took a woman eager to be anywhere but where she was to places no one wants to go.

“No one thinks of L.A. as a taxi town but it’s big, it’s huge. I had some great days driving a taxi in Los Angeles.”-Mary Carol Reilly

In the Tinseltown where she once touched the brass ring, the granddaughter of a Baltimore harness maker held tight the reins of a Los Angeles taxi. Between fares, she took notes–in the form of letters never mailed–about the adventures that flagged her down. 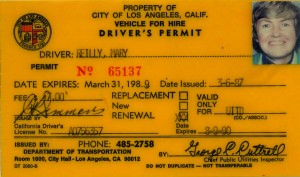 There was the woman who took a cab to surprise her boyfriend out in Marina del Rey, and Reilly prayed the guy wouldn’t be with someone else when they arrived. (He wasn’t.) The rough-looking but perfectly behaved men who wanted to be dropped off in an alley in East L.A. whom she refused, saying, “I don’t do alleys.”

And the 20-something party boys on the town in West Hollywood whose banter was a non-stop discussion of getting women drunk that night so they could take turns.

“People think the driver is invisible,” said Reilly. “I told them they had to get out of the cab for being so disrespectful to women. When I turned around to put them out they were like, ‘Oh my God, it’s a woman. And she can speak English!’”

“I was a white, female senior citizen,” said Reilly of her indoctrination. “Boy was I the minority in that business!”

C. Arnholdt Smith controlled three-quarters of the taxi business in L.A. before folding his scandal-ridden Yellow Cab Company via bankruptcy in 1977. In the void created when Yellow sank in red, unaffiliated drivers organized while waiting for the L.A. City Council to award new franchises.

Eddie Reilly worked cab No. 22, one of the first drivers for the still-active United Independent Taxi Co.

“Eddie and his buddies liked to call themselves the last of the cowboys,” said Mary Carol, who was booed by fellow cabbies at the licensing test when her perfect score was announced. “The freedom is what they loved about it. After I drove that first summer, I understood that.”

So far, Reilly has had a handful of stints of driving a cab in Los Angeles, the only city where she’s done it. Each stretch–including Bell Cab along with United Independent–lasted about three months. She drove during a painful break-up over Christmas of 1985; hacked the summer of 1987; and last took a spin through the Thomas Guide in 2006.

“I liked going out at night after the sun had gone down and it was cooler,” she said. “I’d drive from 6 p.m. to 5 in the morning and get all the drunks up and down Sunset Boulevard.”

Men were better tippers than women, she said. Drunks tipped better than either although you sometimes had to clean vomit off the side of the cab when they hung their heads out the window.

Reilly’s Irish temper has always been tempered by an Irish heart, one softened since 1975 by recovery from booze. “Many times I’d be driving home about 2 or 3 in the morning and see a Latino man at the bus stop, somebody who’d just gotten off work from some restaurant,” Reilly remembered. “I’d pull over and say, ‘I’m going this way anyway, I won’t charge you.’”

If it had already been a good night of driving–say a $350 shift because it was her day to work the airport–the good deed made it even better.

Reilly lives in Baltimore now, working as an overnight caretaker for the elderly and trying to develop new educational shows for children. She would return in an instant to Los Angeles–where she taught high school in the late ’70s and worked as a census taker in 2000–if the gig was right. Her last commercial work was in the 1980s.

“When I retired from teaching in 2004 I went back to L.A. to book commercial work, but I couldn’t get arrested,” she said. Following those disappointments, she drove a cab for a while in 2005. “It’s not the thrill of driving a cab, it’s just the thrill of driving,” said Reilly, who doesn’t sit still for long.

She loves taking a bus across the country (many people have to take a cross-country bus trip but who loves it?) and would hop in her Toyota compact right now to drive someone from sea-to-shining-sea for $1,000.

Asked if she would drive a cab again, the hard-core poker player’s eyes light up like sparklers-call me the tumblin’ dice … -and the answer is swift.

Rafael Alvarez, a short story writer and creator of the Orlo and Leini stories, is author of Truth Be Told , a companion encyclopedia for The Wire.