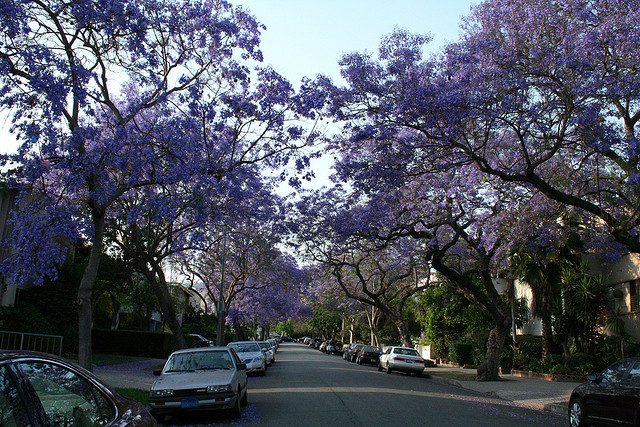 The day we signed our lease, the jacarandas were in bloom. All up and down Martel Avenue, lavender clouds rose against a perfect L.A. sky, and blossoms drifted onto the sidewalk. When we left the leasing office and walked back to our car, I felt glad we’d done it. It was L.A. after all, haloed with mystique and myth and gorgeous weather, the kind you could walk in without a jacket. I’d come to believe we might make this a grand adventure.

At first, I hadn’t been so sure. When my filmmaker husband casually dropped the question, “What would you think of moving to L.A.?,” I sucked in a deep breath and felt my panic rise. I’d long been happily settled in San Francisco. On the other hand, I wanted to be flexible and supportive. I would finish writing my book in L.A., and he could cook up his big film plans somewhere closer to the action.

No one moves to L.A. without having seen it already. The movies, the Beach Boys, Rita Hayworth, the Pacific Ocean. It all seems so familiar that even for new arrivals it feels a bit like coming home. I convinced myself so completely that all would be well that by the day we signed our lease–what I had come to think of as the day of the jacarandas–even I saw an aura of glamour in our plans. But in a small corner of my mind, I felt something else lurking. It wasn’t until a few weeks later, after the moving guys had piled the last boxes onto our new living room floor, that something lit the fuse. I started to weep, and then to sob. I sat on the floor and crumbled. I realized what I had done. I had followed a man in pursuit of his ambitions. And I’d let myself be uprooted once again by someone else’s Hollywood dreams.

That had been the story of my childhood. My family had 13 addresses before I turned nine. At one point, we moved four times in 18 months. Time after time, my mother packed up a baby, then two, then three, and then toddlers and school kids and a house full of goods, to follow my handsome, narcissistic, and insecure father in pursuit of his ever-receding horizons. He worked in radio and television as talent. But he knew he was destined for bigger things–larger markets, better jobs. So he quit the ones he had and leapt for greener grass, which never turned out to be green enough. We were living in Wichita when he left us for Hollywood–which he knew was his destiny.

My father had grown up in Los Angeles, and his father, Leon Ceeley (his stage version of Seeley), was an actor who had landed one great role: Mr. Whitmore in the Marx Brothers’ A Day at the Races. I felt secretly proud of that family legacy, but it had also wrecked us. As we moved all across Colorado and then Kansas, my father was really chasing his father and his own Hollywood dream. He fed his ambitions on roles in summer stock and community theater, but they left him restless, unsatisfied. So the summer I was 12 he made one last try at Hollywood. He knew Clu Galager, he said, and Clu was going to help him get an audition. The whole family made the drive out west, and while my sisters, mother, and I stayed with relatives in Arizona, he went on to L.A. I remember the long drive back to Kansas as silent and tense. There was no more talk of Hollywood. And when we got home, my father packed up and left us for good.

The emotional plots of our childhood lie deeply rooted in our psyches and become the maps we follow as adults. I’d married a man who made movies, and now I’d followed him here. So in more ways than one, I had really come home. To my father’s home place, the source of his fantasies and the catalyst of my childhood suffering. His inheritance might have been the movies, but the bequest he’d made to me was a lack of roots and a memory of trauma that rose from the depths whenever I moved.

This was the story of the memoir I was writing, the one I planned to finish in L.A. I’d come to understand the toll my upended childhood years had taken. I ached for a sense of place but realized I had no deep attachment to anywhere, including Kansas, where I’d finally done my growing up. I hadn’t intended to make peace with my father, or to write about him. But he hovered at the margins from the day I wrote the first words of Chapter One, and by now he’d become a major character. But I still had the hardest chapters yet to write, the ones that would take me deep into the heart of my aching not only for place but for him. When he died in 1999, we hadn’t spoken in nearly a decade.

L.A. brought me face to face with the neighborhoods where my father had been a boy in the 1930s and 1940s. It seemed more than a coincidence. As the weeks went by and we settled in, it began to seem right. As I drove or walked through the city, I met my father at every turn. I often passed Hollywood High, where he’d gone to school. As I drove by houses from the ’30s and ’40s, I imagined he had lived in them during his own itinerant childhood (he’d had 17 addresses in L.A.). I thought of my grandfather when I passed MGM, where he had checked in for his scenes with Groucho. Every day brought me further into my father’s familiar world, the places that had shaped his mythology of self and the stories he’d told me as a child: Forest Lawn, Venice Beach, Santa Monica Pier.

Being there in the places that had belonged to the boy who would become my father turned me tender. It let me see him whole, in three dimensions. I came to understand that his suffering had roots in his own disrupted and often-moving family, and I came to understand the tug of L.A., the homing beacon that always lured him back from wherever we moved. Writing about his life in L.A., imagining him here, helped me forgive him, and then let him go.

I finished my book that first year in L.A. and then we stayed for another two. When my sabbatical ended, we began the long commute. For two years, I spent my weekdays in San Francisco, and my weekends, winter breaks, and summers in Los Angeles, learning by heart that long, straight stretch of I-5 in between. I had the joy of seeing the jacarandas bloom twice more. But no matter the season, whenever I neared the end of my drive, took the Highland exit and slowed into traffic, it always felt like coming home.

Tracy Seeley is the author of My Ruby Slippers: the Road Back to Kansas (2011). Her short nonfiction has appeared in journals such as Prairie Schooner and The Florida Review, and her essay “Cartographies of Change” was named a Notable Essay in The Best American Essays 2011. She lives in Oakland, California and teaches at the University of San Francisco.