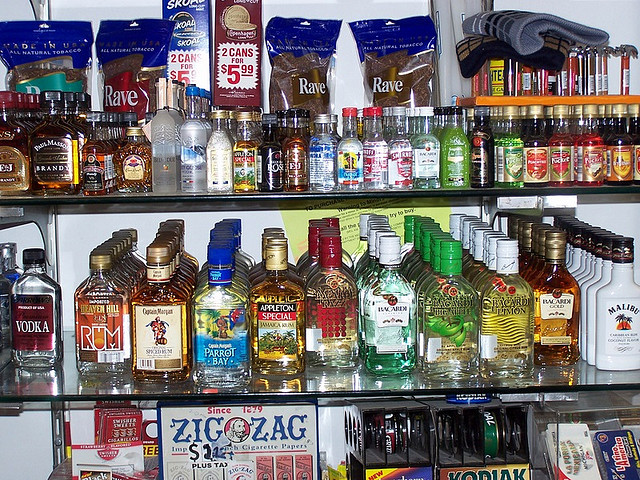 On the second-to-last shelf from the floor, in front of the cashier at Pueblo Liquor in East Los Angeles, lay a dozen greenish bananas. They were sandwiched between a shelf of Hostess Dunkin’ Stix and a shelf with four varieties of ready-to-eat Pop Tarts. All were within equal grabbing distance of a child hungry for an after-school snack. At 50 cents each, the bananas were cheaper than the items around them, and Lily, who was at the cash register, told me she sells three or four a day.

Pueblo Liquor is located at 4600 Whittier Boulevard, right at the base of the Whittier Arch, or “El Arco,” a five-story landmark that stretches across the street. It is open 16 hours a day, 112 hours a week, and its only employees are its two owners: Lily, 46, and her husband Peter, 47. (Lily told me all this but never told me her last name, no matter how many times I asked or how many 99-cent glass bottles of Tehucán mineral water I bought.) They emigrated from the People’s Republic of China in 1992, and they commute to East Los Angeles from their home in Rosemead daily, sometimes twice daily, if their children have a shorter school day.

Lily and Peter bought Pueblo in 1992, when its former owner died of a stroke. They kept its name. For the past 20 years, they have been selling not only liquor but also a small selection of groceries: bananas, milk, dried chiles, and ground spices, among other things. To be exact, Lily sells 60 to 72 gallons of milk a week. At $3.50, a gallon of milk from Pueblo Liquor is about a quarter cheaper than a gallon at the surrounding supermarkets. What allows Lily to keep paying $2,200 a month in rent is sales of malt liquor, soft drinks, energy drinks, lottery tickets, Nyquil, single servings of over-the-counter Tylenol, and rolling papers.

Three years ago, a study by the Los Angeles County Department of Public Health found that 25 percent of residents of Boyle Heights and unincorporated East Los Angeles have high cholesterol, and 30 percent have hypertension. There are about 50 percent more liquor stores per square mile in Boyle Heights than in other similar-sized neighborhoods or cities in the county. That’s why several organizations and activists have designated the area a “food desert” where healthy, affordable food is difficult to obtain. The UCLA-USC Center for Population Health and Health Disparities has even begun a program in which corner stores get $25,000 makeovers to make them healthier. In Boyle Heights, a market called Yash La Casa now sells fresh fruits from the local farmers market and has a juice bar with free Wi-Fi.

I like these makeovers. It’s always good when more stores sell healthy food. But is Boyle Heights or East L.A. really a “food desert”–and are stores like Pueblo Liquor really the problem? I grew up in the area. I still live there. Everyone I know in East L.A. goes shopping once every week or two at a real supermarket. Healthy food is available to us.

I think a lot of the attention focused on liquor stores arises from confusing the symptom with the ailment and from failing to understand the cultural context.

During one of my visits to Pueblo Liquor, I stayed by the counter from 2 p.m. to 3:30 p.m. on a Monday afternoon and recorded each transaction that took place. Every customer except for one (an African American) was Latino–and probably Mexican. This is what I saw:

1. A man in his 40s came in to cash $10 he’d won from a lottery scratcher.
2. A lady in her 50s walked in and said “just one.” Lily knew what she meant and handed her a single Marlboro Light cigarette for 50 cents.
3. A lady in her 40s quietly asked for a pack of Zig-Zag rolling papers.
4. My neighbor, a woman in early 30s, came with her two children and bought her son a Yoo-Hoo and her daughter a Sunny Delight.
5. A balding man bought a six-pack of chilled Bud Light.
6. A black man bought a Carmex lip balm.
7. A woman bought a hefty notebook and a packet of dividers.
8. Two young girls with backpacks bought two prepackaged ice cream cones. The price had recently gone up to $2.20, but the girls only had $2 and exchanged awkward glances. Lily smiled and said, in Spanish, “Next time bring the rest of the change.”

No one seemed to be looking for radicchio or wheat germ. People go to liquor stores because they need something small and simple, and they need it fast. In Mexico, the equivalent institution is the tiendita, the little corner store that sells things like milk, soda, and snack foods. It’s a way of life. Sure, people buy liquor at a liquor store in East L.A. but it’s just as often where you go when you forgot that can of jalapeños, or you need sliced white bread for a sandwich, or you need that gallon of milk. If you’re an undocumented construction worker or custodian or scrap metal collector, it’s where you go to get a quick snack–like a bag of Doritos and a soda–to tide you over until your real meal that evening.

Liquor stores can be targets of robberies or centers of problems in neighborhoods, but a store like Pueblo Liquor is just there to sell people in the area the things they want to buy. Lily and Peter aren’t trying to force anyone to eat Cheetos instead of kasha or Budweiser instead of papaya juice. They get along well with their customers. They speak better Spanish than English, and when prices go up Lily knocks off a dime or a quarter if her customers are short. When customers return the next time, they pay it back. Lily doesn’t know her customers by name, nor do they know her by name, but they pretty much know each other anyway.

A lot of reporters writing about East L.A. seem to consider the residents there to be both more ignorant than they really are and more knowledgeable than they really are. On the one hand, you hear people talk as if the residents of East L.A. fail to grasp that a homemade stewed beef taco is healthier and cheaper than a burger and fries. Well, East Angelenos get it–they don’t have a choice but to get it. They have to make food at home simply in order to save money. On the other hand, you hear people talk as if the only thing stopping residents of East L.A. from eating tofu and steamed kale for dinner is an overabundance of Yoo-Hoo chocolate drinks. That’s of course not the case either. While most people in the area know home-cooked food is healthier than McDonald’s, they don’t spend a lot of time considering the finer points of nutrition.

I know from experience. When I was growing up in East Los Angeles, I ate a lot of junk. Like a lot of my friends, I was raised on stuff like Capri Sun and Flamin’ Hot Cheetos. Only later, as I got older and more curious, did I start reading about food and nutrition on my own and change my habits. And I educated my parents, too–slowly. After six years of food writing and constantly defending why I spend $2.39 per pound on a skinny free-range chicken instead of 99 cents on a pound of plump drumsticks, I’ve finally gotten them to change their habits. Today, my parents eat meat sparingly, stick to whole grains, and use agave syrup instead of table sugar.

That’s the sort of change that comes slowly, as a product of education and improved economic circumstances. It costs more to eat healthier, and it takes more knowledge, too. So either healthy food needs to be cheaper, or people need to be better educated–or, ideally, both. Instead of just bringing healthier, more expensive food to the corner store, policymakers would be better off ensuring that nutrition gets more attention in schools and that health food is subsidized so that it’s not an economic burden for people to make the change.

And if I want a six-pack of beer or a dozen eggs in a hurry, I’m still going to pay a visit to Lily.

Javier Cabral is responsible for TheGlutster.com (formerly Teenage Glutster), a food, booze, music, and general desmadre blog. He currently is an Associate Producer for KCRW and freelances for Saveur Magazine and LA Weekly.