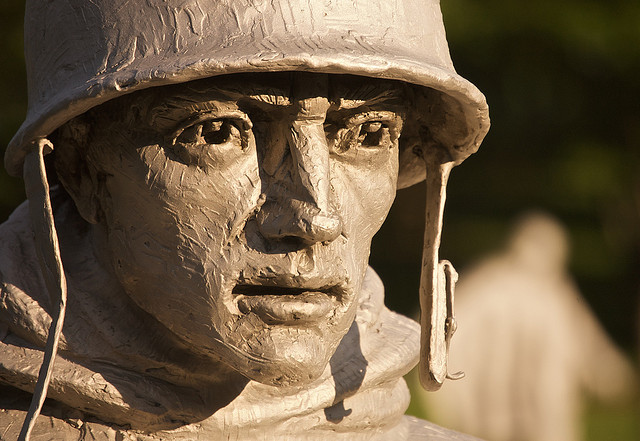 When Bill Clinton was preparing to take over as president of the United States, he got a lesson from Ronald Reagan on how to salute. Back then, it was unusual to have a president without military experience. Today, it’s unremarkable. Neither Barack Obama nor Mitt Romney has served in uniform. While I would never vote for a candidate merely because he served–other factors weigh much more heavily–I believe that both presidential nominees today lack a measure of personal experience that would benefit any commander-in-chief. You learn a lot in the military.

My military service began, in a sense, when I registered with the Selective Service System upon reaching my 18th birthday. On September 17, 1948, local draft board 121 issued me a draft card. (My last name on it was misspelled–as “Rodriquez”–as it was to be on each of the five Selective Service cards that followed.)

In June 1950, I was on a trip to Yosemite with my brother Raul, who had also registered for the draft, when I heard the news that North Korea had attacked South Korea and that President Truman was going to order the U.S. military to South Korea. We realized immediately that our lives were about to change.

On May 25, 1951, after an induction ceremony in the Mode O’Day building at Washington Boulevard and Hill Street in Los Angeles, I was no longer a civilian but a Private in the U.S. Army. My orders were to report to Union Station and take a train to Salinas. There, buses met us for transport to nearby Fort Ord, where we would undergo 14 weeks of basic training. I was assigned to training company C of the 20th Infantry Division.

The first two days at Fort Ord were devoted to getting recruits their clothes, very short hair cuts, shots, and other necessities. The Quartermaster issued us readymade uniforms and footwear with while-you-wait efficiency. My ID tags–dog tags–gave my name, my rank, and my serial number, U.S. 5609 5744. I have never forgotten it. The initials U.S. identified me as a draftee. Regular army personnel used R.A. (Whenever one of us appeared to be working too conscientiously, he risked having others label him R.A.)

We lived in white two-story wood barracks furnished with cots. At the foot of each cot was a green wooden footlocker for personal effects. Each article had its place: rolled up socks facing in the proper direction, underwear, handkerchiefs folded the Army way, comb, and razor. Behind each cot was a rack on which to hang our clothes, left sleeve showing, and a shelf above it for our helmets. Throughout the room were several substantial wood posts to which were nailed two-pound coffee cans painted red and half-filled with water. These were the “butt cans,” offered for the convenience of smokers.

Near the entrance of each floor was a rack in which we locked our rifles. Each of us was issued an M1 Garand, a rifle that General George Patton called “the greatest battle implement ever devised.” It was an air-cooled, gas-operated, clip-fed, semi-automatic shoulder weapon. Each clip held eight 30-caliber rounds. Everyone memorized his rifle’s serial number. We also learned to disassemble and reassemble the rifle blindfolded, by touch alone.

Cleaning our weapons and polishing our boots occupied a lot of our free time, giving us a chance to shoot the bull. Most of us were Californians, but at least two were from Arkansas and another from Massachusetts. Because the bungalows that housed the company were populated in alphabetical order, I had the company of three others who shared my last name. Jose Rodriguez was a mild-mannered fellow with an Alfred E. Newman grin. Luis Rodriguez was a streetwise guy who preferred the tough look. Ramon Rodriguez looked like a confused adolescent. At the barbershop, where Ramon was forced to see the curls of his pompadour tumble to the floor, he broke into tears.

There was also an outcast among us: Schloss, who was never known by any other name. Poor Schloss, a Jewish immigrant from Europe, had a squat body, short legs, a large head, and an enormous mouth, and he spoke English with a heavy accent. His manner was passive, even obsequious, and it invited bullying. Jose and Luis did what they could to make his life difficult. They made fun of his accent. They short-sheeted him so he could not get into bed. They threw his bedding, mattress and all, out the second story window. The behavior of his torturers was shameful, but Schloss might have put a stop to it with a raging defense of his dignity. Instead, he’d smile and grovel, ensuring further persecution.

Saturday mornings brought an inspection of the barracks. We’d prepare the night before with a “G.I. Party,” a thorough cleaning and scrubbing of the living area. Legend had it that the inspecting officer would wear white gloves in order to detect dust and flip a coin onto each bed to see if it bounced. To this day I make my bed Army-style.

Bugle calls regulated our days. Reveille sounded at 6 a.m., when a corporal switched on the lights and we fell in for 30 minutes of calisthenics in front of the barracks. Fort Ord was near the ocean, and on winter mornings the damp cold was invigorating. After exercising we’d shower and shave and wait for Mess Call to summon us to breakfast. Bedtime was at 10 p.m., when Taps played and the lights went out.

Much time was devoted to close order drill. “Forward, march!” the drill sergeant would shout. “Left flank, march! Halt! Parade rest! At ease!” Lectures took place in wood bungalows, where instructors used blackboards and slides to teach us about weapons, the use of gas masks, map reading, and venereal diseases.

I loved the discipline of the Army. I can only imagine the conditions that we men could have created absent strict rules. On Sunday afternoons and evenings, when we began to return from weekend leaves and discipline disappeared, the barracks, especially the toilet areas, became indescribably filthy.

During inspection we stood at attention in ranks and at Port Arms, holding our rifles diagonally across the chest with the rifle muzzle pointed to the left. The inspecting officer walked down each rank, stopping in front of the man he wanted to check. No one looked the officer in the eye–to do so would be a breach of military etiquette. On occasion the officer would take your rifle, peer up the barrel for signs of carbon that had not been cleaned, and open the breech to check if it had been cleaned and oiled.

Target practice took place across the highway toward the ocean on the firing range, where we fired at white targets up to 500 yards away. The range master, from a perch in the tower, told us what firing position to assume, prone or on one knee, and, in a moment I enjoyed for its high drama, announced, “Ready on the right, ready on the left, ready on the firing line! Commence firing!” Fellow recruits stationed in the pits would raise and lower the targets, placing large black tags over any bullet holes. Failure to hit anything earned a red flag and some pointers from the observing instructors.

We also fired other weapons: the light and heavy machine guns, the bazooka, the mortar, the 45-caliber pistol, the carbine, and the BAR, the Barrington Automatic Rifle. The BAR was much heavier than the M1, and we fired it from the hip as we walked a range with popup targets in human shapes. There was no mistaking that we were learning how to kill and how to avoid being killed. We practiced tossing grenades and placed bayonets on our rifles to attack figures stuffed with straw. We were reminded to pack our gas masks before going out in the field, but one day I forgot it. That was the day we encountered tear gas, and I learned a lesson about the importance of obeying orders to the letter. Tear gas smarts.

On Saturdays after morning inspection we received weekend passes. Because I had a 1941 Ford parked at a garage in Seaside, I set up a jitney service and gave three of my fellow trainees rides to Los Angeles, charging each $10.00 for the round trip. We left Seaside around noon and reached Los Angeles at around 10 p.m., only to be back on the road the next day by 2 p.m. to reach Ord by midnight. It was an absurd way to spend a weekend. Except that those who stayed in the barracks soon found that they were easy prey for a sergeant looking for recruits to pull KP, kitchen police duty, peeling hundreds of potatoes, and scrubbing outsized pots and pans for hours at a time.

Toward the end of our 14 weeks we underwent exercises that simulated combat conditions. We advanced toward a group of buildings held by an enemy that fired at us, and we encountered explosions and smoke and clanking tanks lumbering noisily toward us. Even though we knew we were in no real danger, it was terrifying.

As we experienced simulated combat, the possibility of real combat drew ever closer. Jokes about becoming cannon fodder ceased, and no one mentioned Korea anymore. One tall, blond, thin boy from Arkansas who had lied about his age to get into the Army had second thoughts and revealed the truth. He was released to go home. Ralph Marciano, a saxophonist from Massachusetts, played more melancholy music. During one of our last activities, a 20-mile march lugging full packs and rifles, the kidding and horseplay that had accompanied our previous marches and group activities were no more. We all had the same thought; nobody voiced it.

To mark the end of our training, our company participated in a full dress parade on the base Parade Grounds. Several bands played, and we marched with other companies to the cadence of martial music. We wore our Class A uniforms with hundreds of spectators looking on and flags flying. I was proud that day to be a soldier in the Army of the United States. I was proud to be an American. I still am.

I believe that any commander-in-chief would profit from having undergone the rigors of military basic training. He would also benefit from having felt the weight of possible deployment to a combat zone (not to mention actual combat).

The next day, Saturday, was our last day at Fort Ord. We fell in after breakfast in front of Company Headquarters, standing at attention in ranks facing the Company Commander. Our orders had been cut, and in a few minutes each of us would receive his set. That piece of paper would determine which of us would live and which would die.

When my name was called I went up for mine. I scanned the papers rapidly, looking for the word “Korea.” The terse and formal language belied the significance of the orders:

I remembered that toward the end of basic training, when Army job placement personnel interviewed us, I had told my interviewer about my work as a postal clerk at the Terminal Annex in Los Angeles. Alaska Command, it turned out, needed postal clerks.

Had I been sent to war, I would have done my duty, followed orders, and hoped for the best, just as American troops in warzones are doing today. Tens of thousands of young Americans went to Korea, and, officially, 36,568 died there. Many of my fellow trainees were among them, but I don’t know who got sent and who didn’t. That day, after receiving my orders, I left the grounds immediately and headed to my car.