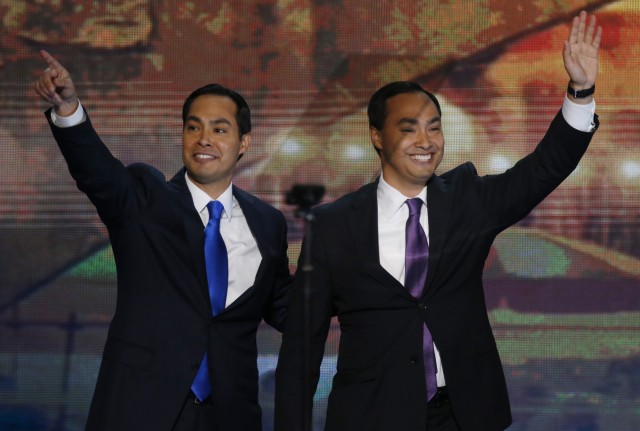 In 1995, as a freshman at Stanford, I watched two Texans two years above me land the highest number of votes in the race for student senate. They were identical twins, no less, a fact that made for a catchy story in the school paper (“Twin Senators Not Two Close for Comfort”) and a portrait of the smiling, newly minted politicians clad in khakis and polo-style shirts, sitting back-to-back on the floor of the Stanford Quad. It seemed Julián and Joaquin Castro had grasped a critical lesson my sister and I had learned running for our junior high student council: Being a twin pays in politics because it doubles your publicity and votes-and people love twins.

That was 17 years before Julián would keynote the Democratic National Convention, “plucked from relative obscurity,” as CBS News put it Tuesday, though he is now the mayor of the nation’s seventh-largest city.

I didn’t know the Castros well at Stanford, but we had friends in common and a natural affinity as fellow Mexican Americans from Texas, meaning we smiled at each other when we crossed paths on campus. I perceived them to be more mainstreamed Hispanics less invested in the ethnic politics that others of us had embraced away from home. When one or the other showed up to a party at Casa Zapata, the Chicano-themed dorm, I sensed he was there mostly to watch, to check it out, maybe, to understand one part of his constituency better. I had no idea they’d already had their own schooling in 1960s-style Chicano activism from their mother, Maria del Rosario Castro, a longtime community organizer (and single mother) who’d battled for the political inclusion of Mexican Americans, a demographic majority that remained outside the power structure in San Antonio.

It was Rosie Castro’s values around public service that made Julián, the elder of the twins by one minute, wonder if it now was his turn to continue advancing her cause. In a lyrical essay he penned in a freshman writing class in response to the prompt “Do people ever make assumptions about what you’ll do after college, and how do you feel if they do?” he described the political gatherings he’d grown up around (“functions,” his mother called them) that all seemed to him to blur together (“the same speeches and speakers, the same cheese and ham sandwiches”). But he concluded that “maybe politics” was his future.

Stanford became the Castros’ first staging ground. Both brothers double-majored in political science and communications, working under the mentorship of professor Luis Fraga, who specialized in Latino urban politics. After they graduated in 1996, they returned home for a year and took a job at City Hall while they waited to begin Harvard Law School the following fall. Ever more aware of the media cache of their personal story, they granted an interview for another feature in the local newspaper (“Double the Talent, Twice the Ambition”). Though they claimed not to know what they’d be doing in the future, Julián vouched it would include public service, adding that no San Antonian had ever been elected to the two highest offices in Texas. “We do not consider the office of governor or senator an impossibility,” he told the reporter.

Several years later, I met up again with the twins to write a piece for Texas Monthly about their formal launch into politics. They’d finished law school, and now 26-year-old Julián was serving his first year as San Antonio’s youngest councilman, while Joaquin, previously less sure about politics, had thrown his name in a local state representative race he’d win that fall.

Surrounded by energetic young volunteers, they were running grassroots campaigns that hinged on heavy analysis of voting data and relentless canvassing. Their mother served as their chief strategist; always a feminist, she wouldn’t allow them to use the supposedly masculine term “war room” for their workspace. In fact, it was a failed attempt by Rosie 30 years earlier to get on the council that helped the Mexican American Legal Defense and Education Fund to make a case, successfully, to the U.S. Justice Department that San Antonio needed single-member districts to ensure fair representation.

That Rosie’s son was now the direct benefactor of those struggles moved her, enough to inspire her to believe a Latino could someday be president, she confessed to me. But that was before Barack Obama, when many of us couldn’t yet imagine the country embracing anything but a white president.

In Julián’s case, his next step was to move from the city council into the mayor’s office, and, though he hoped to break another age record, he fumbled a run-off in his first attempt in 2005. The business establishment had found him too far left on some council issues, so they supported an older, more conservative candidate. Julián was forced to sit out the next four years but returned a more cautious, centrist candidate in 2009-this time winning comfortably.

It was an important lesson in broadening his appeal that Julián would carry forward as his popularity began to grow. That December, he was invited to a White House economic forum where he caught the eye of the President. By the next summer, The New York Times Magazine was branding him a “post-Hispanic Hispanic politician,” a Democratic pragmatist who favored affirmative action, gay rights and green energy policies yet supported free trade and championed balanced budgets.

Julián in that piece seemed like much more of a centrist than the one I’d gotten to know as a journalist eight years prior. About his mother’s politics, he told the Times, “I don’t want to turn back on my mother’s generation, but we are less burdened.”

The rest now seems like history. In January, Michelle Obama invited Julián to sit with her at the State of the Union address. Then the president asked him to co-chair his re-election campaign and chose him to be the first Latino to deliver the same DNC keynote that catapulted Obama into fame. Joaquin, for his part, is likely to win a fall race for the 20th Congressional District seat in the U.S. Congress. The twins have become the convention’s darlings and an overnight media sensation.

In his keynote address (which received high praise and Al Gore called a “grand slam”), Julián reflected on his family’s past and his college experiences with “some of the brightest folks in the world” but questioned whether other students from his public high school shouldn’t have been at Stanford, too. He hammered home the argument that prosperity demands opportunity and that opportunity demands investment.

“We know that in our free-market economy some will prosper more than others,” he declared. “What we don’t accept is the idea that some folks won’t even get a chance. And the thing is, Mitt Romney and the Republican Party are perfectly comfortable with that America.” Romney, he said, was a “good guy” who “just has no idea how good he’s had it.”

As I watched the address unfold, I detected a bit more of Julián’s evolution, the frames that had subtly shifted to accommodate this audience in this political moment. Julián now underscored his immigrant roots. The leading character in his story became not his activist mother but his newcomer grandmother: an orphaned child who crossed the border while very young and spent her life “barely scraping by” as a maid, cook, and babysitter, cleaning homes so her daughter could get to college.

Certainly, Julián’s speech was part a strategic effort to capture more Latino votes for Obama in critical swing states. But I also wondered if the narrative of immigration-a narrative of new beginnings, not unlike that of Barack Obama, of America as a land of opportunity and exceptionalism-wasn’t intended to replace Rosie’s stories of battling structural racism and the narrative of America as a nation of social exclusion rather than inclusion.

Still, as I heard Julián speak and watched the twins I went to school with grin and embrace each other on the stage-this time in smart business suits, commanding the attention of a nation-I found myself swelling with pride. Whether there’s any hope for Julián to first climb the political ranks in Texas, where the Democratic Party is powerless and in disarray, and whether he has enough of a record to satisfy conservative critics who accuse him of riding on potential, Tuesday was a big day, and not just for the Castros. Because they hadn’t been plucked from obscurity or landed on-stage overnight. They’d been working their way there for almost two decades, and for two generations before that. And that was a story some of us could recognize.

Cecilia Ballí is an anthropology professor at the University of Texas and a contributor to Texas Monthly.