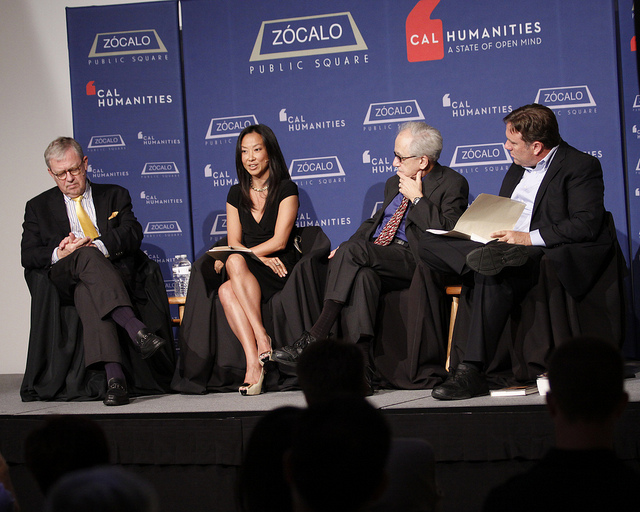 We tend to think that both democracy and diversity are good things; many of us even say that diversity is a strength. But others have argued that our polyglot nation is too big, too complex–simply too diverse–to boast a healthy and vibrant democracy. Zócalo editor and Center for Social Cohesion fellow Joe Mathews opened a Zócalo/Cal Humanities “Searching for Democracy” event by asking three social scholars and thinkers which side is right.

Michael Barone, author of The Almanac of American Politics, told the crowd at the Barbara and Art Culver Center of the Arts in Riverside that their city “is emblematic of America”: rising diversity has coincided with a decrease in political participation and perhaps political efficacy. “Diversity is in some tension with democracy,” said Barone. But this problem has existed for 200 years; the Civil War was the result of different regional belief systems and customs. In the past, we’ve dealt with these tensions by limiting the role of the federal government and organizing in voluntary associations, said Barone. To the extent that we’ve removed limits on government and discouraged voluntary associations, tension between diversity and democracy has increased.

Richard Alba, a scholar of immigration at the City University of New York, said that he believes diversity has brought a lot of benefits to American democracy. Diversity has given us cultural leadership in the world, and has altered the nation’s political culture. “The genius of American democracy, up until now at least, has been in its ability to bring new groups into the political mainstream,” Alba said, pointing to the current presidential contenders: a half African-American candidate running with a Catholic, and a Mormon running with another Catholic. America today, said Alba, has a nondenominational public culture. But the big question going forward is if “we [are] going to be able to open up the mainstream for the newer groups” as effectively as we did in the past. 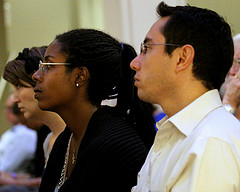 University of California Irvine sociologist Jennifer Lee said that Americans have made some false assumptions about diversity. Diversity, she said, does not lead to political polarization. With the exception of certain hot-button issues like gay rights and abortion, Americans today are no more polarized than they were 40 years ago–even though they are much more diverse. But she said that America is not a post-racial nation, even though some Americans assume we have arrived at that point. Race matters–and it does so more profoundly for African Americans than any other group, despite the fact that we have an African American president.

We’re living in more harmony with each other in our immediate surroundings, said Mathews. But according to The Big Sort coauthor Bill Bishop, that’s partly because we’re increasingly living with people who think and act like we do. What does this say about how we really feel about diversity, and what does it mean for our democracy?

Barone said our self-sorting is a result of our affluence. He said that there are a lot of people in San Francisco who wouldn’t move to Dallas for any amount of money–and vice versa–because “they have the sense, pretty accurately, that they’re not that kind of people.” By contrast, in the mid-20th century, one culturally unifying event helped bring Americans together about a lot of issues: World War II.

Alba agreed that self-sorting and polarization have less to do with diversity than with affluence–as well as technology. People choose the media they consume as well as where they live in terms of general political outlook. As a result, “there’s less rubbing against each other–and less chance for each [side] to appreciate the standpoint of the other,” he said. 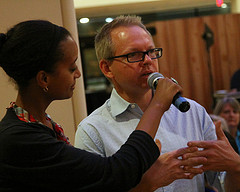 Lee told the story of an Italian colleague who was in the U.S. studying political participation and polarization. Her colleague said that in all of her time in the U.S.–living and working in New York–she’d met only three Republicans. She had concluded, said Lee, that Americans will talk to strangers about the most mundane subjects–but they’ll only talk about the important issues, like politics, to people they believe are like them.

Barone said that these trends aren’t as novel as we think. In most of the 19th and early 20th century, the American media was extremely partisan; even in New York in 1959 or 1960, there were nine daily newspapers of different political persuasions and ethnicities.

But America has transformed in other ways, he said, returning to Riverside. In 1942, President Roosevelt ordered the internment of Japanese Americans in the West Coast states, and the media used derogatory terms to describe all Asians–all of which a crowd in Riverside at that time would have supported. But today, everyone present–and all Americans–would find those attitudes repugnant. It’s “a nice transformation,” he said, and one that justifies optimism about where the country will go next.

Lee said that she is optimistic about what’s to come. It’s true that most Asians and Latinos don’t vote–but of those who do, over half are not identified with a particular party. This gives her hope that the issues are going to become more important than our partisan parties. 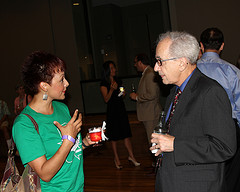 But Alba and Barone said that it’s important to keep in mind that voting patterns among immigrant groups are quite different from those of African Americans. “There’s a very deep cultural strain in our society that sees immigrants as more admirable than African Americans,” said Alba–which is benefiting Asian Americans and Latinos. But Alba does believe that our binary conception of race–“you were white or you were not white”–is going to shift into a more differentiated concept of race that resembles that of Latin American countries.

The conversation about race continued in the question and answer session, where the panelists were asked for their thoughts on the value of the census, and whether categories need changing.

Barone would like to see racial categories eliminated entirely: “To me it resembles the racial classifications of South Africa or post-reconstruction Louisiana.”

But Alba said that race has been an important historical factor, and one that’s still associated with a great deal of inequality; we need these categories in order to measure that inequality. He does think census categories are created by a political process that’s problematic. For instance, he said, we allow people to report that they are of mixed race. But, he said, that doesn’t apply to the Hispanic category, which is a separate question. You cannot be partly Hispanic and partly something else–and “that’s crazy.”

Lee said that the alternative to our current flawed system is France, where they don’t have racial categories or discourse to talk about racial discrimination and inequality. “I understand the utopic vision you have,” she said to Barone. “We’re not there yet.”

Watch full video here.
See more photos here.
Read an essay by Bill Bishop on the shape of diversity in America today here.
Read opinions from political scholars on how religious and ethnic diversity can be bad for democracy here. 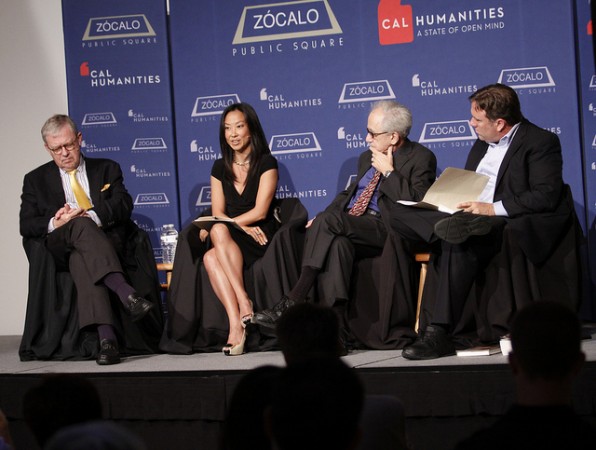