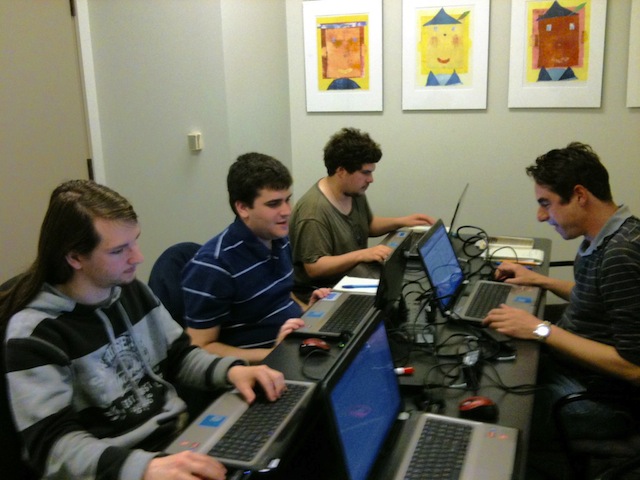 On the first Saturday of each month, we of the Autism Job Club of the Bay Area gather at 10 a.m. at the Arc building at Howard and 11th Streets in San Francisco. The 30 of us usually in attendance are adults with autism and their friends and parents. We have been meeting regularly since late 2011. Given the demographics of autism in California (an estimated one in 88 children in California is diagnosed with Autistic Spectrum Disorder), we will be a significant part of the state’s future labor force, even though it is unclear how we will fit in.

Most of us, like my 23-year-old son William, are “Aspies,” diagnosed with Asperger’s syndrome, the “high-functioning” form of autism—although, as autism is a spectrum disorder, distinctions between types of autism are not sharp. Nearly all of us have some college education, and the majority have college degrees. Yet most of us exist on the margins of the job market, without steady jobs, even when the economy is good.

We start each meeting by going around the room and providing updates on our job searches:

• Robert is in early 30s, with a degree from San Francisco State University in child/adolescent education. His job history includes short-term stints as a courtesy clerk at a large supermarket, as a busman at a coffee shop chain, and a four-month position in the technology department of a major hotel.

• Gabriel, late 20s, who has some college credits, does short-term transcription gigs he finds through family contacts while he seeks a full-time job.

• Martha, also late 20s, has a master’s degree in library science but has been able only to find work 12 hours a week as a clerk in a small legal office.

• Mark, early 40s, worked in an IT consulting firm for 15 years, but his business partner died four years ago, and the business collapsed.

• Jim, 72, is the senior member of our group. He has college degrees in physics and chemistry and worked on a project basis a few years back for Apple. Mainly, though, he has worked in non-technology jobs: delivering pizza, doing yard work, supervising an afterschool program for youth. He comes to the Job Club regularly; at 72, he’s still out there looking.

We rely on volunteers—counselors, parents, graduate students. Cindy Zoeller is a workforce career coach in Sacramento who heard about the Job Club and drove 90 miles to our organizational meeting in November 2011. She volunteers as the club facilitator, preparing the agenda and handouts and leading each session. She in turn recruited Tim Gardiner, another career coach from Sacramento, and four enthusiastic graduate students from San Francisco State.

After providing updates on our job searches at our monthly meetings, we share job leads and practice job search techniques. At a recent meeting, the volunteers updated each participant’s resume. At other meetings we have practiced interviewing techniques, use of job boards, and job networks.

It is difficult to overstate how much has changed in public awareness of autism in the more than two decades since I first entered the autism community in California. In 1990, autism was an obscure condition that the general public knew largely from the movie Rain Man, if they knew it at all. Today, you cannot open a newspaper or log onto a news website without seeing some article on autism. Autism themes and characters are featured in television shows and in more and more movies (Adam, Mercury Rising, Mozart and the Whale, Temple Grandin).

In 1990, you might find in bookstores a handful of autism memoirs or novels with autistic characters (Sue Miller’s Family Pictures, which appeared in 1990, was the most prominent). Today, a new autism memoir appears almost every day, by parents and even grandparents, and there are so many autism novels that a new genre of “aut lit” has developed.

Despite this autism explosion in popular culture, the job situation for persons with autism has not changed a lot. Unemployment among Californians on the autism spectrum is estimated at between 60 and 70 percent, the same as in 1990. The passage of the Americans with Disabilities Act in 1990 was expected to increase employment levels among persons with autism, along with other workers with disabilities. But this increase never came to pass, even when the economy was strong in the years prior to 2007 and the Great Recession.

Why is this so? The job search process rewards sophistication in finding job leads, in networking and interviewing. These are precisely the executive function skills that most of our members lack. Employers today receive hundreds of applicants for any job opening. They use computer programs to screen applications or rely on in-house references and networks to fill jobs. In both paths to jobs—anonymous job board applications and personal networks—our Job Club members are several steps behind. 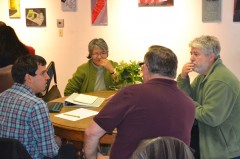 We also lose jobs frequently due to real or perceived poor performance. We may be too slow in making change or answering the phone, or we file or shred documents in the wrong way, or a hundred other different mistakes.

In September, Mr. Marty Nemko, a well-known Bay Area job counselor who hosts a radio show on job search and writes a job column, came to visit us. He left appalled, as he described in this post. Nemko had come to our Job Club thinking of “Aspies” as highly intelligent if socially awkward. Instead, he reported that one person couldn’t remember his name, another said he was so exhausted at a job interview trying to appear normal that he “was useless for three days,” and a third “slipped into a mystical foreign language mid-sentence.” Mr. Nemko concluded that most of those in attendance had “anomalies severe enough to make it unlikely they could find stable employment in today’s job market except perhaps doing structured low-level work, in isolation.”

A number of our members were upset by this post, and Mr. Nemko did misconstrue and exaggerate some of what he saw at that meeting. But his account helps us see how we may appear to those outside the autism community. It underscores what a number of us at the Autism Job Club concluded some time ago: the conventional employment approaches of government job search programs and job counselors/coaches will never be enough. We need to build our own autism job networks, and have begun to do so.

So far, our autism job networks take two forms. One form, a very limited one, is the development of nonprofit businesses that can train and provide work experience to people on the autistic spectrum. We currently have one training program/business in software testing, The Specialists Guild, started by two of our members, Luby and Andy Aczel, who have over 25 years of experience in the technology field. The Specialist Guild last month graduated its first group of three trainees and is starting on a second group of three. Andy Aczel is now trying to generate clients for the business, although no matter what the trainee numbers will always be small.

Our main employment approach is to build a network of contacts in existing businesses. These contacts are drawn at least initially from the family, relatives, friends, and neighbors of people with autism—a substantial and growing group. We hope this autism network will help us to identify jobs particularly suited to people with autism. Pamela Buttery, a Job Club member and former real estate partner of Oakland Athletics owner Lewis Wolff, volunteers her time to go into technology companies with which we have contacts and identify jobs, such as software tester, that might be good fits. The social media and Internet commerce cluster of firms in the Bay Area is our initial focus for job placement.

Beyond assisting in placement, our network will assist in retention. Our workers often need additional time to get up to speed and to fit in operationally and socially. We benefit from patience and having someone cover our backs for a while. 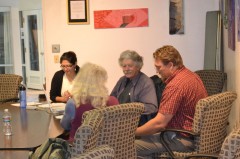 Earlier this year, I participated in the search of one of our Job Club members, a senior at a California State University campus, for a summer job. He sent in nine or 10 online applications for internships at social media and Internet commerce firms and did not receive any response. We then turned to the local McDonald’s restaurants, since the owner of several of these restaurants had an interest in autism.

At his interview, our Job Club member laughed to himself at inappropriate times, picked up the interviewer’s pen and jabbed it in the air, and occasionally seemed lost in thought. Still, the owner wanted to give him a chance and hired him for the summer. Initially, this new employee made mistakes and did inappropriate things like picking up slightly used straws and putting them back in the straw holders. But after a time he got the hang of it. He did not miss a day all summer and was always early to work.

It’s too early to say if our autism network will succeed in any significant way. We are in a time of unprecedented unemployment, and even workers without autism are experiencing great difficulty getting any job. Also, facing constant pressure and competition, many firms have no bandwidth to take on an employment initiative. Early this year I met several times with officials at Zynga, the phenomenally successful Internet game company that was looking for big social issues to tackle. Today, as other online game companies provide new competition, Zynga is concentrating on maintaining its balance.

Despite these difficulties, the approach of building networks outside government is the best hope now for people with autism—just as it is, to a lesser extent, for non-autistic workers.

It takes a village to find a job in today’s economy, for nearly everyone. The job boards, such as Monster.com or Indeed.com, bring in a flood of applicants for each position. LinkedIn and the other professional development Internet sites are oversubscribed. All of us need to reach out when we need job assistance to our friends, colleagues and families, and be available to them in their job searches. We all need someone to cover our back when we start a new job, just as we need to help others in our networks adjust to employment duties.

We are all members of the Autism Job Club now.