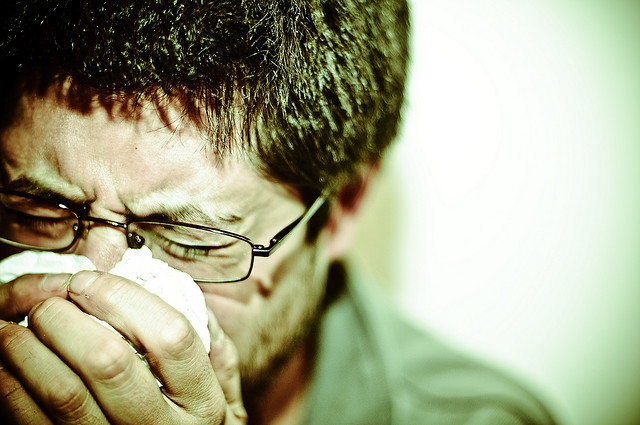 Last week in my clinic, I saw a patient with AIDS. As part of this visit, my patient was examined by a medical assistant who had a cough and sniffles. This medical assistant declined an influenza vaccination this season, yet he still is allowed to work with patients. He was literally placing my patient’s life at risk.

As a doctor of internal medicine, I would like nothing better than to tell this medical assistant to get a flu shot or stay away, but I have no such authority. Nor does my healthcare organization, which employs this medical assistant. Healthcare workers are protected by union contracts, and unless the state of California overrides a given provision, the contract determines what employers can demand. As things stand, if you want a healthy nurse, you have to keep your fingers crossed.

To understand this absurd situation, it’s necessary to understand something about the public policy involved. For years, the official recommendation from the Centers for Disease Control has been that at least 90 percent of healthcare workers get flu vaccinations. Ninety percent is the magic threshold for what’s called “herd immunity.” If you have a herd of 100 animals and 90 of them are immune to a contagious disease, then that disease will be unable to establish a stronghold within the herd.

In other words, if 90 percent of healthcare workers were to get inoculated—leaving room for up to 10 percent of their colleagues to refuse based on known allergies or a past adverse reaction—then our hospitals and doctor’s offices would be safe. Currently, however, only 64 percent of healthcare workers in California get the influenza vaccine. Even a devastating and well-publicized H1N1 pandemic in 2009 didn’t prompt the implementation of all possible precautions.

For that reason, last February, California state legislators wrote up a bill to do something about it. The bill, Senate Bill 1318, would require healthcare facilities to meet a 90-percent flu vaccination rate among their workers by 2015. Of course, in order to meet a requirement like that, employers must be able to force—or at least strongly incentivize—their employees to get the vaccine. To that end, the original version of SB 1318 contained a mandate that all unvaccinated healthcare workers wear a mask for the duration of the influenza season, from October through April, while in patient care areas. That way, no healthcare worker would be forced to get the vaccine, but the price to pay would be the inconvenience of wearing a mask.

Along the way, however, legislators experienced a last-minute loss of nerve, so they removed the mask provision, fearing it to be a landmine of personal rights violations. Instead came a general requirement that all healthcare facilities meet the 90-percent worker vaccination mark by 2015. As for how facilities would enforce that measure absent any teeth, that question was left unresolved.

In any case, SB 1318 made it to the desk of Governor Jerry Brown, getting California a little closer to doing away with a needless health hazard. But Brown vetoed it on September 30 of this year. The California Nurses Association, a powerful labor union, had objected to the measure, alleging it was “divisive and could lead to future discrimination issues in the workplace.” (The alternative of letting unvaccinated employees wear a mask seven months out of the year had been struck down by the union months earlier.)

For now, the only hope for doing something about the problem can be found at the local level. In California’s public health system, the public health departments of individual counties are governed by physician “health officers,” the local equivalent of the surgeon general. These doctors have oversight of all communicable disease control within their jurisdiction, and they technically have the power to quarantine a city and even to throw infectious citizens in jail. Of course, no one is expecting them to do anything like that. But odds are good that more and more physician health officers will institute their own influenza mask mandate—or find some other way to motivate workers to get the shot.

As Dr. Bob Hartmann, health officer of Amador County, recently told me, “If the legislature is going to continue to wimp out, we as health officers need to mandate.” Hartmann ordered masks for unvaccinated workers in October 2011, and Amador County has already seen its hospital vaccination rate soar to 89 percent. “Hospital CEOs were begging me to do it,” Hartmann said. “It made their job easier when I gave the order, so they didn’t have to. And really, it’s my responsibility as the Health Officer of this county to step up to the plate.”

Is such use of power unprecedented or, as some healthcare workers allege, unconstitutional? Actually, no. For years most hospitals in the United States have required employees to receive vaccinations against measles, mumps, rubella, and Hepatitis B as a condition of employment. Adding influenza shots to that mix hardly seems dramatic, especially considering that more people die from influenza each year than of all those other diseases combined.

To be sure, measures like the mask mandate have prompted skeptics to object on scientific grounds. They point to a study by the CDC in 2008 that concluded that viruses such as influenza can survive for hours on surfaces, that they can be spread by surface-to-hand or hand-to-hand contact, and that masking creates a false sense of protection for employees and patients. But the study did not show that masks make things worse—and, more important, if the effect of a mask mandate is that more healthcare workers get vaccinated, then the mandate surely serves its purpose.

Of course, all of these fights revolve around a more fundamental—and age-old—debate over where to draw the line between protecting the rights of the public and the rights of the individual. Should our government have the power to mandate a vaccine? Or do individual rights take precedent? But that debate seems awfully arcane when a potentially infected healthcare worker is coughing on my AIDS patient. They have a right to work in a different profession if they like, but no healthcare worker has a right to infect—and possibly kill—my patients.