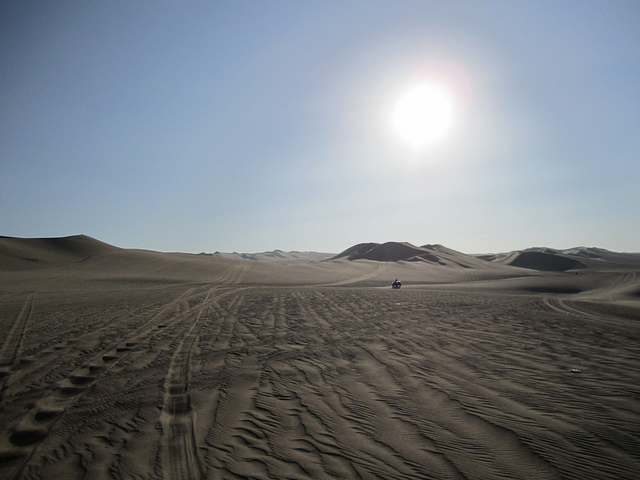 With alcohol, but even that is scant comfort

Neck-deep in the Colorado

When summer rolls around, many of us react much as we would in winter: by running inside. But some hearty souls brave the sun and stay out of doors. They may speak of “dry heat,” or they may just claim to enjoy it out there. Even those of us who are less enthusiastic about the sun occasionally find ourselves either without shelter or without any choice, and we must make the best of a very high temperature. But how? In advance of the Zócalo event “Why Do We Love Hot Places?” we asked several heat veterans who write about nature to be our guides: what is the most delightful way to spend a 100-plus-degree day outdoors?

With alcohol, but even that is scant comfort

Heat is man’s greatest enemy. At least it’s mine. Heat dulls my mind and saps my will to live. I loathe it; I abhor it. My hatred of heat exceeds the bounds of my thesaurus. My preferred cosmological conclusion is the heat-death of the universe. All of everything will be a tomb but heat will be dead. Death to heat.

So, of course, I moved to Las Vegas for four and a half years. Four and a half summers. My car did not have air conditioning. Because I am an idiot. Also, I refused to give in to the heat. I became a connoisseur of linen shirts, misters, and deep shade. I drove around with a frozen bottle of water in my crotch. I got heatstroke three times.

But I did not give in. I tried summer hiking in the early morning hours, walking for hours over sand and caliche until at last I reached a distant tree. I kayaked below the Hoover Dam and stood neck deep in the Colorado River until my brain cooled off.

In the end, though, there really is only one way to deal with the heat. That is to get drunk. So I sat on the porch with my legs in a bucket of water, a wet towel around my neck, and I raised a jingling glass.

Then I gave up and moved to Vermont.

Brendan Buhler is a freelance writer whose work has been collected in The Best American Science and Nature Writing 2012.

Neck-deep in the Colorado

On the river, of course. I count among my most pleasurable times the 100-plus degree days spent on the Colorado in the Grand Canyon, so cooled by the splash from rapids that the ambient temperature barely registered.

Downstream of Glen Canyon Dam, the river runs 50 degrees cold and colder, and the contrast of its frigid waves with the furnace air of the canyon can only be experienced to be believed. There’s scant shade midday, save in pockets and caves within the rock walls, and those hiding places can be rare. Out on the water, there’s sun and more sun, and sometimes the best cure for it is a simple float in one’s lifejacket until the river has performed its miracle of refrigeration.

When I was boating, I sometimes felt a twinge of guilt seeing my passengers in the bow fully drenched by a monster wave while I sat behind them on the rowing seat, dancing through only the finest of sprays. If those same people hadn’t worn massive smiles, I’m sure my guilt would have grown. As it was, they seemed thrilled to have the good old Colorado dowse any trace of 100-degree angst.

I didn’t begin to suffer in the heat of summer until I’d retired from commercial guiding. Then it became clear that, whatever my profession, July and August had to be planned to be spent on the water. Some of my favorite places to keep my cool are the Yampa River in Dinosaur National Monument, the Green River in Lodore and Desolation Canyons, the Colorado in Westwater, Cataract, and Grand Canyons, the San Juan in southern Utah, and the Rogue in southern Oregon.

Rebecca Lawton is a former Grand Canyon river guide and the author of the new novel Junction, Utah, and the best-selling Reading Water: Lessons from the River.

When it’s that hot you know there is only one solution: water. Preferably cool ocean water. And I like to be on it, in it, or under it. Sinking into the Atlantic and leaving the air-breathing world behind for the cool, quiet relaxation of the world beneath the waves is an experience I never tire of. But for me the most delightful way to spend a hot day outdoors is to go beyond just getting ocean wet by racing a small sailboat, called a Laser, in stiff winds.

The Laser is just 14 feet long and meant to be sailed by one person. With a good breeze it is fast, physically demanding, and with the smallest mistake liable to flip over and give you a good soaking. During a race, spray is flying, boats are all around you, your adrenaline is pumping, your muscles are straining, and your emotions soar and sink according to your position.

As nice as it is to swim, turning over during a race is pretty slow (you have to clamber up on the centerboard, and stand on it, to right the boat). But between races all you have to do to cool off and relax is roll out of the boat into the water and let the ocean work its magic. Sailing takes your mind deep into the interplay of wind, water, and sail, and you have to try and get yourself completely in tune with the wind, the currents, and the wave patterns. You are not just outdoors; you are fully immersed in the outdoors and the rhythms of the natural world. And more than likely, there is a cold beer waiting for you back at the dock.

The last thing you are thinking about is the air temperature, or air conditioning.

Tim Zimmermann is a correspondent with Outside magazine. You can follow him @wetass, and see more of his work at timzimmermann.com.