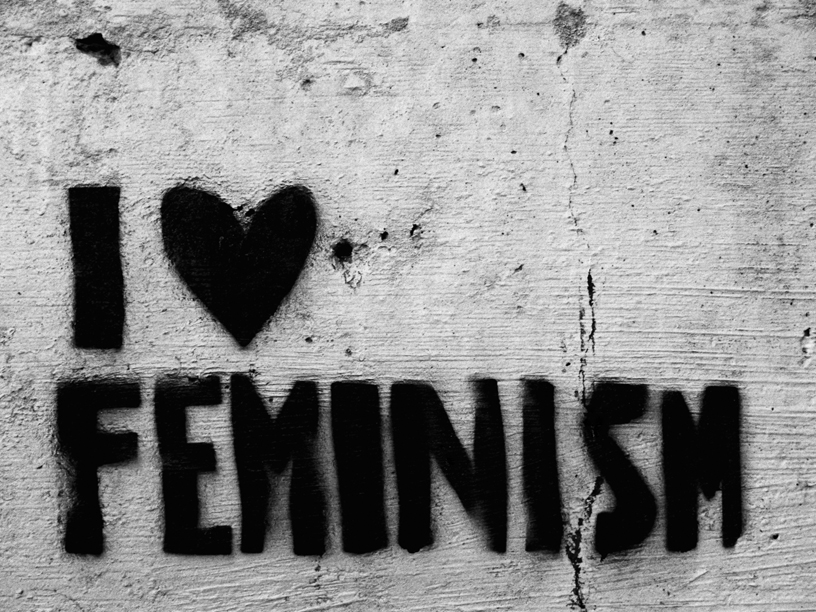 When I was in college in the early 1980s, fresh from four years of indoctrination at a Catholic all-girls’ high school that women could be anything, do anything, and didn’t need to take a back seat to any man, I thought the women’s movement was over.

Doors were opening, right? Women, though not many yet, were showing up in engineering classes and getting degrees in business and accounting in record numbers. In 1985, the year after I graduated, for the first time in history, more American women than men got college degrees, a trend that has only accelerated since. Now, a majority of graduate degrees and Ph.D.s go to women.

Sure, we knew discrimination lurked out there. But feminism, so many of us thought, was for angry, humorless man-haters who didn’t shave their legs and only seemed to talk about abortion. We were beyond that, right? What we considered “women’s issues” seemed to reek faintly of special accommodations for people who just weren’t up to snuff. We were ready to march headlong into the much more important “man’s” world. Of course we had no idea how to do that, let alone how to do that and at the same time have a family, or whatever form of life one wanted outside of work. We were determined to have equal partners at home, even though we had no role models to show us how, and no clue that as fast as you can say “maternity leave,” time-use research shows most couples slide into traditional gender roles after the birth of a child, even when they never intended to. Still, the heady, idealistic, and supremely naive attitude I recall among all of my female cohorts can be summed up as: We’ll figure it out.

And lest you think that I and my friends at a not-so-elite college in Oregon were the only ones so ignorant of what the world and our lives would really be like, on page 142 of Facebook COO Sheryl Sandberg’s much-buzzed-about new book, Lean In: Women, Work, and the Will to Lead, she describes the same phenomenon in the 1980s in the esteemed corridors of Harvard. “My friends and I truly, if naively, believed that the world did not need feminists anymore,” she writes. “We mistakenly thought that there was nothing left to fight for. I carried this attitude with me when I entered the workforce. I figured if sexism still existed, I would just prove it wrong. I would do my job and do it well.” My personal mantra was similar: “Keep Your Head Down and Do Good Work.”

But in thinking that if we failed, we had only ourselves to blame for just not trying hard enough, this is what we got: The United States has among the most mothers who work of any developed country on earth—close to 80 percent of all school-age children have mothers who work for pay outside the home. Yet unlike other countries where many mothers work full-time, we have no affordable, accessible, and high-quality child care system. We have no federal laws mandating paid parental leave, paid sick days, or even vacation days. We have no right to request flexible work. Americans, including working mothers, work among the most extreme hours of anyone on the planet. Whatever flexible arrangements a worker has been able to negotiate—in order to care for a child or an aging parent, or simply to have a life—are ad hoc gestures of mercy or goodwill from one’s immediate supervisor. Oh, and if you benefit from them, social science research shows that you’d better be prepared to be seen as a slacker.

Women, though they are about half the workforce, make up only a handful of Fortune 500 CEOs, 14 percent of top executives, and 7 percent of top earners. Eighteen percent now have a seat at the table in Congress. The wage gap between men and women starts immediately upon graduation, according to the American Association of University Women.

At home, global time-use studies show that compared to women in other nations, American mothers spend the most time with their children and have the least amount of free time to themselves. Though American fathers have stepped up in recent decades, American mothers still do about twice the housework and child care. And even after the 2008 recession pushed more women into breadwinner roles, economists at the Levy Economics Institute of Bard College found that the division of domestic labor became slightly more fair, but only because working mothers stopped doing as much, not because fathers at home did more.

Clearly, this “feminism is over, keep your head down and do good work” strategy has not worked. At least not for most women.

Sandberg is in a rare position. And in her book and the “Lean In” consciousness-raising circles she hopes to create, she exhorts other women to follow her lead. Her strategy still demands good work, and hard work. But instead of putting their heads down, she writes that women who want careers and family need to learn to lean in to them, not to leave before they leave, to sit at the table, speak up, raise their hands, learn how to negotiate, and demand full partnership from their mates.

This call to a renewed feminist mission has not and will not be easy. Women who speak up and show their ambition are often punished by a world that still expects deference and niceness from women. As feminist legal scholar Joan Williams writes, “Women don’t negotiate because they’re not idiots.”

But Sandberg’s reminder that the women’s movement isn’t over is essential, because many young women still feel the way I did back in college. Sandberg writes that today only a quarter of all women in the United States consider themselves feminists, though, when “feminism” is removed from its hairy baggage and defined as believing in social, political, and economic equality between men and women, women’s support rises to a more robust 65 percent. (An anemic number which, frankly, is surprising in itself in the 21st century.)

Chandra Mason is a social psychologist at Mary Baldwin, a women’s college in rural Staunton, Virginia. After years of pondering the stalled gender revolution, she turned her attention to the work and family expectations of college students as they anticipate their futures. Each succeeding generation of women, the literature shows, confidently overestimates their ability to “just figure it out,” and vastly underestimates just how hard that will be.

“They’re prepared to work harder. But when you talk to some of them about the need for a feminist movement, they stare back blankly at you,” she said. “They accept the wage gap. There’s such a confidence, that ‘I can do anything’ attitude. They don’t really know how things are going to be. But they’re calm and confident that they’re going to cross the bridge when they get to it and they’ll figure it out.

“In some ways, I’m really happy about it,” Mason continued. “I hate the thought that someone’s going to curtail their dreams. But at the same time, I worry that they are underprepared for the reality that’s waiting for them.”

To gauge how young men and women think about their futures, Mason’s pilot study included a focus group of male students at a predominantly male institution. She found that they thought only of finishing their education and getting established in careers. At some point, they imagined they’d have families. “But they weren’t spending any time thinking or talking about it,” she said. For the most part, the opposite was true, she found, in focus groups with female students at Mary Baldwin. As young as 19, most of the women could talk at length about what they hoped for, planned, fantasized, and even agonized about when it came to managing family and career.

Mason said few of her students, as Sandberg warns, spoke in terms of scaling back their dreams out of fear that they couldn’t have both career and family. But more than 100 young women at a Midwestern university studied by psychologists Janell Fetterolf and Alice Eagly did. Even as demographic data show a clear rise in female economic independence, the researchers found that “in all conditions, participants expected to have lesser salary and more domestic work than their husbands.” And this was true even when they anticipated having advanced degrees and full careers.

Mason said she’s conflicted, pressing individual students to focus on the looming challenges, and to figure them out for themselves, while also being a big advocate for public policy changes so each woman doesn’t have to keep reinventing the wheel. “But this is the real world,” she added, “and until someone comes up with real policy, then we are all out there fending for ourselves and trying to make the best of what we’ve got.”

Feminist writers have criticized Sandberg for concentrating too much on this “fixing the woman,” and not enough on the outdated laws, policies, attitudes, workplace cultures, and powerful gender norms that have kept both men and women stuck since the 1980s. But like Mason, Sandberg lives in the real world. She, too, writes about the need for policies and laws that better match the reality of working families.

But the truth is that the cultural conditioning about gender roles that shapes a woman’s—and a man’s—internal world is as powerful as it is unconscious. To move the stalled gender revolution forward, to redesign work and workplace culture, gender roles, and the way we organize families for both men and women, requires change on both the personal and the political fronts. Sandberg acknowledges as much, calling it the “ultimate chicken-and-egg situation. The chicken: Women will tear down the external barriers once we achieve leadership roles. The egg: We need to eliminate the external barriers to get women into those roles in the first place.”

Emboldened by the 20-point gender gap in the recent election, Representative Carolyn Maloney, D-New York, is preparing to re-introduce the Equal Rights Amendment. Remember that? The amendment to the constitution pushed by those hairy-legged feminists guaranteeing equality under the law regardless of sex passed both houses of Congress and was heartily endorsed by then-President Richard Nixon in … 1972. Without it, Supreme Court Justice Antonin Scalia maintains that the constitution does not bar sex discrimination, saying “if the current society wants to outlaw discrimination by sex, you have legislatures.”

As Maloney explained, “American women are empowered in so many ways. We’re treated so much better than women in so many other countries. But there’s so much unfinished business.”

The revolution has been stalled for far too long. And we’ve got to start somewhere if men and women are going to have a fair shot at living their best lives. A raft of research is beginning to emerge that men feel trapped at work, stressed that they don’t spend enough time with their families, and that they, too, are desperate for change. We all—men and women alike—are smack in the middle of one of the most massive upheavals of the social order in millennia. We all have a long way to go to just figure it out. And one place to start is to reclaim and embrace the true meaning of feminism—the personhood of women. And to fight, not for women to just better fit into the old structures, but to make them anew. For everyone.

And at the very least Sandberg, and all the heat and noise surrounding her book, has got us all to begin to lift up our heads and talk about it again. Out loud.