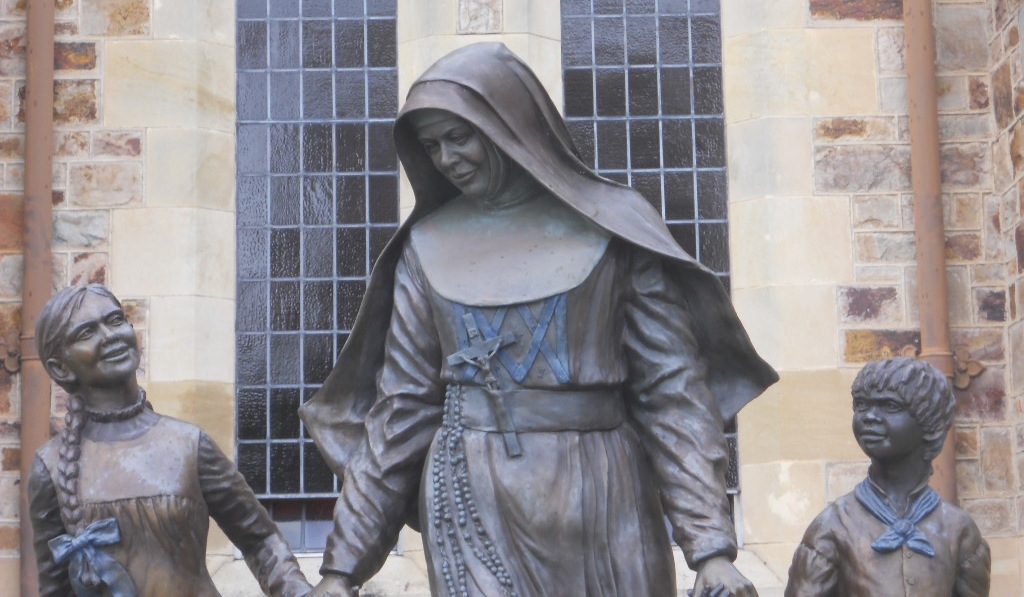 We lived in a white, wood frame house a half-block east of 61st and Main Streets in South Los Angeles. It was a pleasant and quiet neighborhood. Our street was lined with houses that looked much like ours. Well-tended front lawns doubled as playgrounds for the children. Backyards gave us even more room to play in. I was seven years old; brother Raul was five; sister Alma was two; and Norma was born that June. The year was 1937.

Across the street lived the only other family in the neighborhood that could be called Hispanic. The Sanchez family came from New Mexico and said that they were descendants of the early Spanish settlers there. They considered themselves Hispanos.

Ernest Sanchez became my best friend. He, too, was seven and like me he started first grade that year at nearby St. Columbkille School for boys and girls. Ernie and I were both quiet, well-behaved, and studious. That is what bonded us. We spent so much time in one another’s company that many people assumed we were brothers.

Our first-grade teacher was a young nun who belonged to the Order of Sisters of Notre Dame de Namur. We children addressed her as Sister. She taught us to read. The first pages of our primer contained pictures in color of a boy, a girl, and a dog and began: “Dick, see Dick. See Dick run. Jane, see Jane. See Jane run.”

Spot was Dick and Jane’s dog, and he merited a page of his own that followed the same rhythmic pattern. Millions of American children learned to read using that primer.

I must have enjoyed the experience, because I never stopped reading. Early on, I discovered the Ascot Branch of the Los Angeles Public Library at 70th and Broadway, where I spent many happy hours in the stacks. I went to sea on The Jinx Ship with Tod Moran, ran away to the circus with Toby Tyler, and traveled to Paris with D’Artagnan and his Musketeers.

These were the Depression years, but, materially, we managed. Father always had a job, and he got up every morning and went to work, even when he had a hangover, which was often. Father was an alcoholic, and drinking made him violent. On innumerable nights I experienced terror. It was a constant in my life.

If home was associated with outbreaks of barbarous, blood-chilling paternal behavior, school was its antithesis. Each morning I would get up and go to school and act as if nothing had happened the night before. I found the peace, order, and challenge of school to be a safe harbor.

The school day began on the lawn that fronted 64th Street. At 8 a.m. the student body gathered around the flagpole there. As the American flag was raised we sang the national anthem and recited the Pledge of Allegiance. An energetic march played over a loudspeaker, most often “The Stars and Stripes Forever” or “El Capitan.”

Tuition was two dollars a month. The nuns took vows of poverty, which kept the cost low. Among the surnames of my classmates were Nicasio, Peluso, Fishbeck, Hesketh, Bazurias, McGinley, and Bruno—a mix of ethnicities. But the nuns believed that every pupil was a child of God, equal in His eyes and therefore equal in theirs. They treated their charges accordingly. Writing the name Nicasio also makes me remember: In the third grade our teacher had each of us send a Valentine’s Day card to a classmate. When Maria Nicasio trumpeted the news that I had sent her a card, I regretted doing so. I was painfully shy.

The nuns emphasized writing, and we learned to diagram sentences, separating them into clauses and phrases and identifying the parts of speech. Ernie and I spent much time at the blackboard diagramming sentences and solving arithmetic problems in competition with each other or with the clock. We were the two best students in our class for each of our six years there.

Our wood desktops had round openings for bottles of ink. Our pens had nibs that separated clumsily when I pressed down to write, often producing an inky mess. We wrote on rough paper called foolscap and, following the Palmer method of penmanship, drew large circles and a lot of up and down lines. I considered the exercises a waste of time, so I should not have been surprised when Sister said to me one day, “Manuel, your handwriting is abominable!” It still is.

During music lessons, our teacher would draw musical staffs on the blackboard using a metal-and-wood contraption that held five pieces of chalk. We learned the rudiments of musical notation, and we had music books that contained the words and music of songs from around the world—Italy, Ireland, England, and Mexico included. We sang many American folk songs. Years later, when I plucked at a guitar, playing and singing with my children, I used what I learned in that class.

One day, a man from the Bank of America visited our classroom and gave each of us a moneybox in the shape of a book with the bank’s name and logo embossed on its front cover. A small key came with each box, and each of us was issued a savings account passbook and encouraged to save coins. We brought our moneyboxes to school on a certain day each month. The bank man would open each one, count the money, enter the amount in our passbooks, and pour the coins into the cloth bag he carried with him. We learned early to value thrift.

In 1939 my brother Raul started first grade, joining me at St. Columbkille. Like the other students, we generally took sandwiches to school for lunch, but on occasion mother prepared tacos for us. We were the only ones in school who ate such exotic fare, and, not wishing to be conspicuous, we shielded them from view as we ate, covering them with our hands.

One lunch hour, we sat across from a boy named Eddie Bressoud. Eddie was savoring his dessert, an éclair, spread on top with a thick layer of dark chocolate and stuffed with cream. Eddie was so engrossed in what he was doing that he didn’t notice that Raul and I were staring. When he finally looked up and became aware of us, he blurted out, “What are you looking at, big eyes?”

Eddie became a professional baseball player and played 12 years in the major leagues, principally with the Giants (both in New York and San Francisco) and the Boston Red Sox. But, for me, Eddie will always be linked to the pangs of watching him consume that awe-inspiring éclair—all by himself.

The nuns lived in a convent that adjoined the school. They would occasionally summon me there, usually on a Friday after school. Sister Superior would hand me a five-pound block of butter and a package of salt pork to take home. I dutifully performed the chore but resented being considered an object of charity. Mother appreciated the butter but always threw the salt pork away. “No somos tan pobres,” she said. We’re not that poor.

On Holy Days, we filed out of school and walked up to Main Street and into the church. In early May, we sang as we walked, “Oh, Mary, we crown Thee with blossoms today; / Queen of the Angels, Queen of the May.”

A hedge with flavorless berries bordered the sidewalk, and several of the boys—to show off—would pick the fruits and pop them into their mouths while walking along. Inside the church, the girls, their heads covered, sat in the pews on the left, and the boys in those on the right. George Bazurias, who resembled the comic John Belushi both in physical appearance and in behavior, amused himself by cracking soft jokes and looking for ways to clown around without being spotted by the adults.

Ernie and I were altar boys and often served together, frequently the 6 a.m. daily Mass. In winter it was dark at that hour. We walked together the few blocks from home, and when we reached the church, the elderly caretaker, Mr. Whelan, wearing a gray hat and puffing on his pipe, would greet us, unlock the church doors, and turn on the altar lights, leaving the church interior half in shadows. In the sacristy we exchanged greetings with the priest and donned our long black cassocks and starched white surplices before going out to the sanctuary to light the altar candles.

At the appointed time we stepped out onto a red carpet and walked to the altar, the priest following us. After genuflecting we knelt to recite the opening prayer. The priest, who remained standing, intoned, “Introibo ad altare Dei.” I will go to the altar of God, and we responded, “Ad Deum qui laetificat juventutem meam.” To God who gives joy to my youth. (In my time, abuse scandals like the ones that befell the Church in recent years were inconceivable.) Catholic services added much beauty, structure, and meaning to my life. When I returned to that church many years later, I was struck by how small it was. In my imagination, it was a veritable St. Peter’s Basilica.

In 1940, our altar boy picnic was held at Brookside Park in Pasadena. A small procession of automobiles transported us there via the recently opened Arroyo Seco Parkway. It was one of my first ventures outside the immediate neighborhood.

I was never at risk of becoming a societal problem, but, because of my father’s behavior at home, I was under constant stress. I bit my fingernails, all of them, to the quick. I always hurt. I learned to wear an impassive mask and keep my emotions hidden. Anger, even my own, frightened me. Adult male authority figures caused me anxiety. I once fought Pat Bruno, a talented, all-around athlete who liked to take charge and bark out orders. I also fought Paul Fishbeck, a hard-nosed football player. The recollection that I picked fights with those two gifted athletes astonishes me. I must have been motivated by my experiences with my father, for such behavior was alien to my character.

In those years, my family saw new arrivals with the births of Robert, Gloria, Fernando, and Marie. We moved to a larger house, and the nearest Catholic school now was Holy Cross, located two miles north at 47th and Main Streets. I was there for the seventh and eighth grades. The nuns at Holy Cross belonged to the Order of the Sisters of Saint Joseph of Carondolet, and what the Sisters at St. Columbkille gave me, I received in equal measure from the nuns at Holy Cross. They always encouraged the best in us.

When I was in eighth grade, our school principal, Mother Agatha, and my teacher, Sister Paula, selected me to represent Holy Cross on the radio. In those days, station KFWB aired a quiz program whose contestants were pupils from Los Angeles grade schools. The entire eighth-grade class, the principal, and several Sisters trooped down with me to the KFWB studio on Hollywood Boulevard. Tex Ritter, the Western singer, was a guest on the program that day, and the announcer read a commercial for the most recent Hedy Lamarr movie, The Heavenly Body.

In the years since, I’ve often heard alumni of Catholic schools speak mockingly of their education, but I never cared for that type of humor. To me, it suggests ingratitude and a desire for “coolness.” For me, life was made immeasurably happier because of the guidance and encouragement of those good women who were my first teachers.