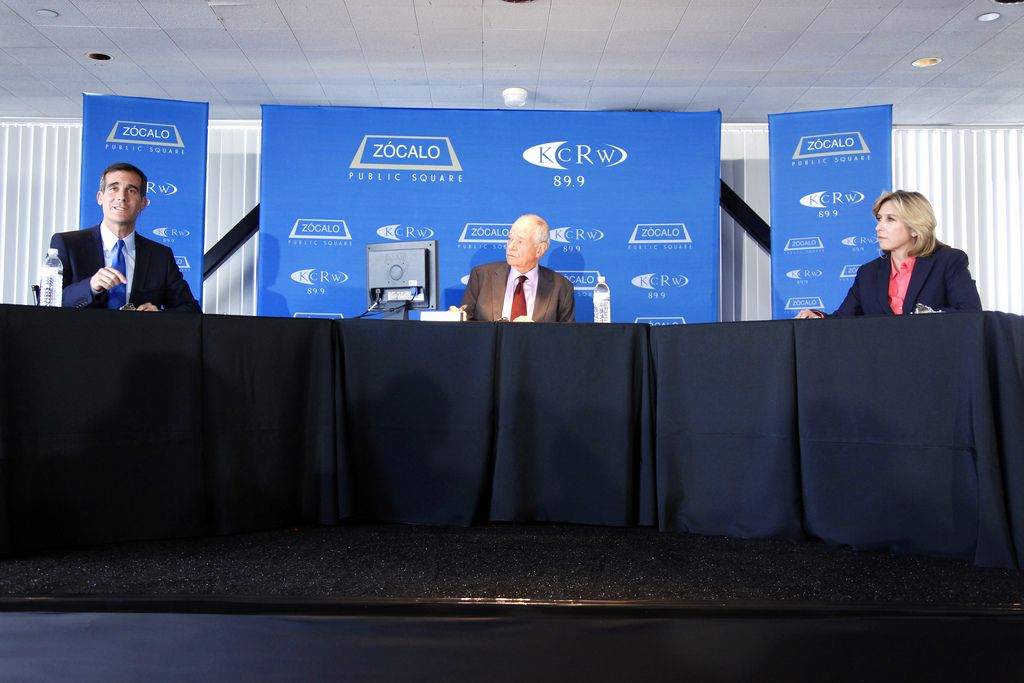 With two weeks before the runoff election for mayor of Los Angeles, candidates Eric Garcetti and Wendy Greuel sought to distinguish their positions and records from each other in a debate co-presented by Zócalo and KCRW at the Petersen Automotive Museum.

The subjects at hand were education, setting priorities in the face of a gaping deficit, and life in Los Angeles. The moderator was Warren Olney, host of KCRW’s “To the Point” and “Which Way, L.A.?” The debate was being aired live for a special edition of “Which Way, L.A.?” in front of a capacity crowd, with audience members also listening in an overflow space nearby.

After opening statements from both candidates, Olney opened the debate with a challenge: How do the candidates expect to change Los Angeles’ underfunded school system without direct power over the LAUSD superintendent and Los Angeles School Board, and without control over school funding? When mayors make an issue of schools, Olney asked Greuel, “Are you excessively politicizing education?”

Greuel, the current city controller, said that education isn’t an issue in a vacuum but something the future of the entire city depends on. As mayor, she said that she would work to elect good School Board members, to advocate for more education money from the state, and to look for ways to make schools more effective (including charter schools, and pilot programs), and by continuing to operate the 22 schools that are part of the Partnership for Los Angeles School started by Mayor Antonio Villaraigosa.

City councilman Garcetti agreed that while the mayor doesn’t have formal power over the schools, “informal power and financial power” are within the mayor’s purview; he agreed, too, that education is an issue that resonates throughout the city, from economics and health to public safety.

Olney challenged him about using city funds on schools—and whether he’d put the school district ahead of the city.

Garcetti said that as a councilman, he used anti-poverty money to build a community center within a school, athletic fields, and libraries that benefited the schools as well as the surrounding community in his district. “We’ve built up walls around schools” and said they’re on their own, said Garcetti. “I don’t want to do that.”

Olney asked the candidates if they were supporting either of the candidates for the open seat on the Los Angeles School Board. Greuel said she was backing Antonio Sanchez; Garcetti said he has not yet decided which candidate he’ll endorse, and quipped that he was busy running for mayor when Olney asked him why he’s waited so long to choose.

Both candidates agreed on a number of points: that technology is going to be important to the future of L.A.’s schools; that the city squandered an opportunity by losing out on federal “Race to the Top” money because of labor leaders’ objections to participation in the national competition for funds; that reducing classroom size will help L.A.’s schools succeed; and that teachers’ performance scores should be made public.

So where, asked Olney, would education—though a mayoral responsibility outlined in the city charter—ultimately rank on your list of priorities as mayor?

There are other issues that are important to the economy as well, said Olney—and transportation is among them. The Los Angeles Times has reported that city street repair in Los Angeles has a 60-year backlog and that the average grade of the city’s streets is a C. To bring that grade up to a B will cost $2.6 billion. Olney asked: What will the candidates do to repair L.A.’s streets, and how will they pay for it?

Garcetti said that during his first term, he’d use Measure R sales tax funds earmarked for transportation on a “comprehensive project” that looks at repaving the city’s streets.

Greuel said that she’d centralize the repaving of the city and look at a number of different financial sources to pay for fixing L.A.’s streets.

Olney asked the candidates about balancing the budget as Mayor Villaraigosa has proposed, and the debate quickly got heated over pension reform.

Both Garcetti and Greuel pledged to work with L.A.’s unions on pension reform and salary increases—and criticized each other’s records on reform and the unions.

As the debate wound down, Olney asked questions that audience members had submitted in advance regarding more frequent suspensions for students of color, a waiver for No Child Left Behind, small businesses, public transit, and the negative tenor of the campaign.

Both candidates agreed on virtually all these issues—and both denied responsibility for the campaign’s negative turn. 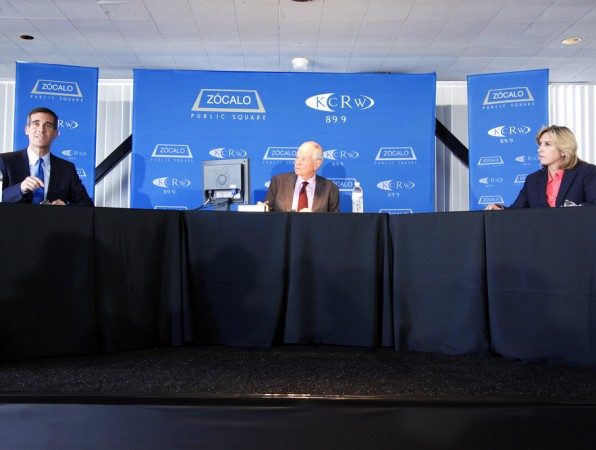 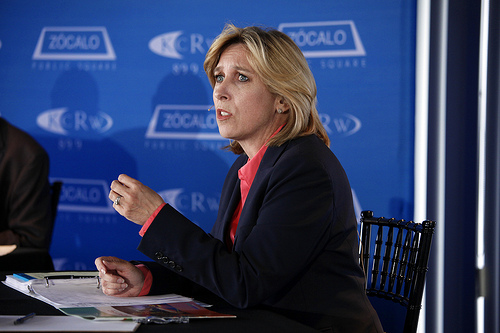 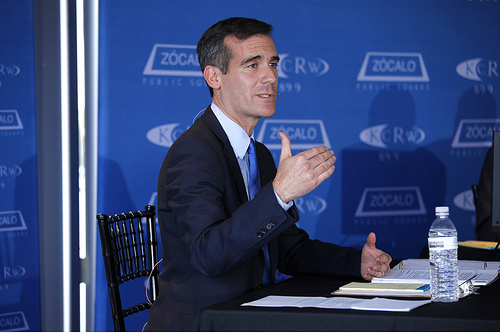 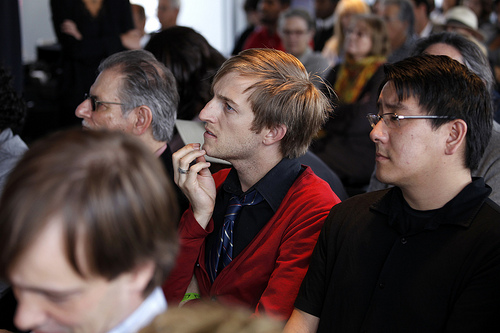 It was a full house at the Petersen Automotive Museum 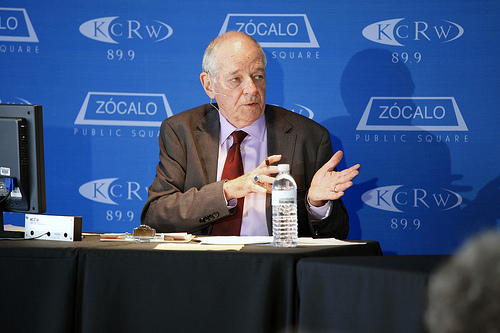 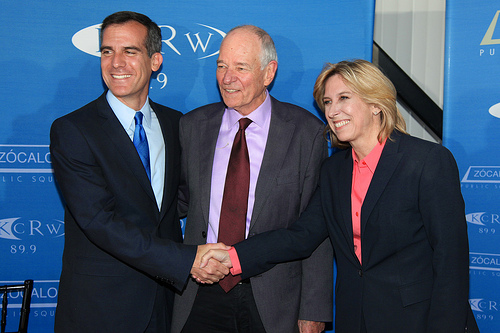 After the debate, the candidates and Olney posed for the press