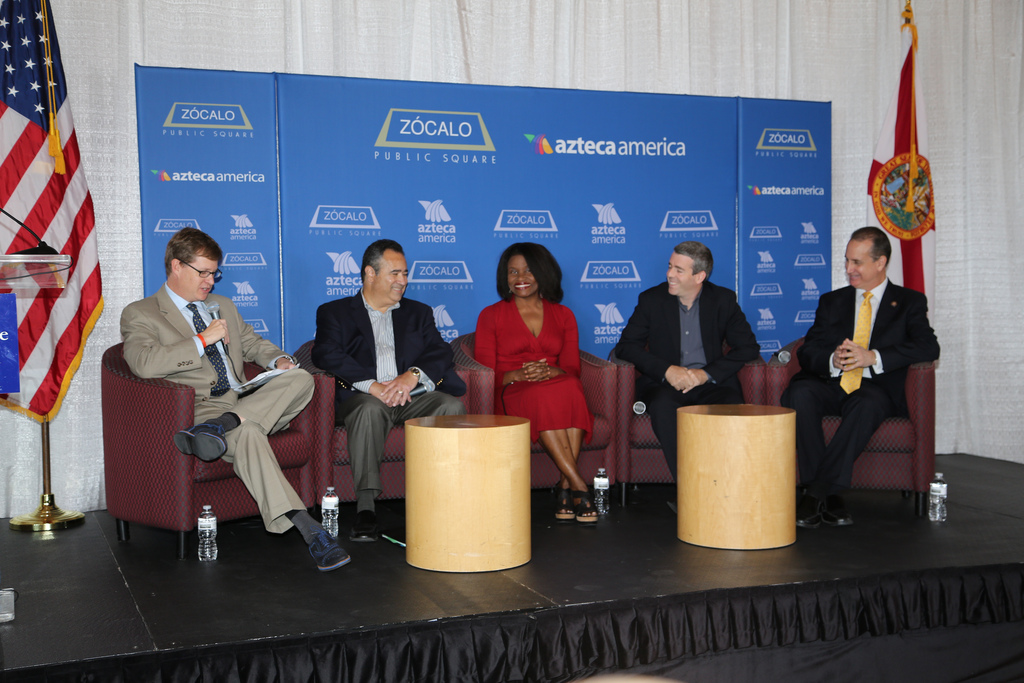 A higher percentage of immigrants live, work, and own businesses in Miami than in any other city in America. But as comfortable as South Florida has become with absorbing people from around the world, the region could soon experience big changes in the ways that new arrivals—and long-time residents—become part of its fabric. At a Zócalo/Azteca America event at Miami Dade College’s Freedom Tower, a panel discussed what the immigration reform bill currently on the table in Congress might mean for Miami and its environs.

Cruz explained that after World War II, immigration to Miami exploded; in 1940, Miami-Dade County had under 30,000 foreign-born residents. By 1960, that number had increased about five times, and by the year 2000, half the county’s population was immigrants, a percentage that’s stayed steady over the past decade. Today, more than half of Miami’s tourists are international, and in 2012 about $100 billion in trade came through the city by air and sea—two-thirds of which was from the Caribbean and Latin America. Both human capital and financial capital from abroad, said Cruz, have been vital to Miami’s growth.

A contrarian might say that Miami is booming without immigration reform, said Martinez. What sorts of benefits might reform bring to the immigrant community and to everyone else?

Marleine Bastien, executive director of Fanm Ayisyen Nam Miyami/Haitian Women of Miami, asked the audience to imagine the pain and agony that the children of undocumented immigrants go through every night, wondering if tonight will be the night that their parents are taken away and deported. If comprehensive immigration reform passes, she said, we’ll be able to keep families together who have been living in the U.S. for as long as 20 or 30 years. “People will come out of the shadow of fear and into the light of freedom, and respect, and dignity,” said Bastien—adding that these people have worked in our hospitals, schools, and restaurants, keeping Miami running. “We owe them that much,” she said.

Both Bastien and Congressman Mario Diaz-Balart, a Republican who represents Florida’s 25th congressional district, spoke about the larger economic contributions immigrants would be able to make for the community once their legal status changes. Immigration reform, said Diaz-Balart, is among the “very few things we could do in Congress right now that could immediately help the economy.” The undocumented immigrants who already live and work in America “tend to be the most aggressive, the most hard-working” people from their home countries, he said. They’ll continue to work hard—and they’ll also have the potential to lawfully, openly create businesses. “We can have a huge shot in the arm to the U.S. economy if we are able to pass immigration reform,” he said.

Turning to Michael Grunwald, a senior national correspondent for TIME Magazine based in Miami, Martinez asked if he has a sense of how the conversation around immigration reform is distinctive in South Florida as opposed to Texas or California, which also have large foreign-born populations.

“Immigration is so—it’s such a part of the fabric of life here—in a way that’s regardless of party or which part of the world you came from,” said Grunwald. In Washington, immigration is an abstract issue—a problem to be solved. In Miami, immigration is seen as a strength; here, he said, we don’t see immigrants as people in desperate straits who need help. We see them as the people who run businesses and run our community.

Immigration reform seems to feel less polarizing in Miami than in other parts of country, noted Martinez. Is that, he asked Diaz-Balart, a fair assessment?

Diaz-Balart said that immigration reform remains polarizing in other parts of Florida and in the community because it’s such a highly emotional issue. But lately, he said, we’ve been successful in bringing down the decibel level in conversations around it. And he added that he has sensed a desire to fix our system everywhere he goes.

The economic case for immigration reform has been key to selling it to the public, said Martinez. Does Miami-Dade County have a sense of what the economic impact will be of the legalization of hundreds of thousands or millions of people?

Cruz said that people tend to forget that most undocumented immigrants are already paying property taxes if they are homeowners or even renters. He said that legalizing workers who are already here will mean less wage exploitation and more buying power for the economy. And for every potentially negative factor, there tends to be a positive factor to counteract it.

Martinez asked Bastien to speak to what the immigrant community in South Florida wants to see the legislation address.

The community wants to see “inclusive” reform that keeps families—both traditional and nontraditional together; reform “that trail-blazes a path to citizenship”; timely reform that doesn’t keep people waiting 15 or 20 years to reunite families; and non-discriminatory policy that doesn’t heavily tax immigrants, she said.

Diaz-Balart couldn’t comment on the details of ongoing negotiations, but he said that he sees consensus among the American people about a pathway to citizenship: “We don’t want a group of people who are permanently here who can never aspire to become a U.S. citizen.”

In the question-and-answer session, a number of audience members who are undocumented or have undocumented family members asked the panel to talk more about the legislation’s effects on families. One audience member asked why the Obama administration has kept people in Haiti who have been approved to come to the U.S. waiting for so long. Is there anything, Martinez asked Bastien, that President Obama could do now to help the community?

Yes, she said. He can, without Congress’s approval, enforce Deferred Enforced Departure and also approve Haitian family reunification for all. 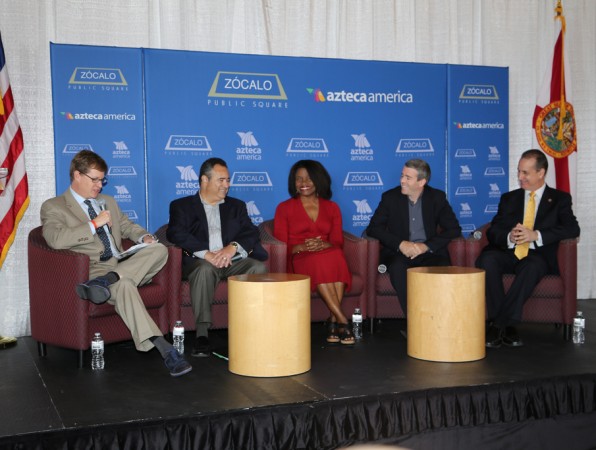 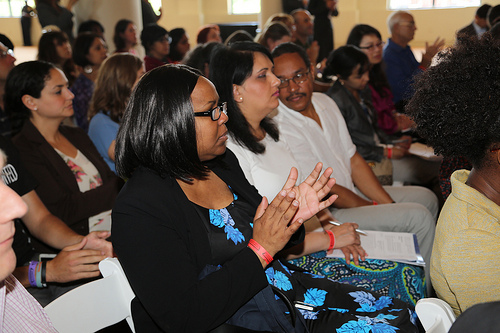 The audience at the Freedom Tower at Miami Dade College 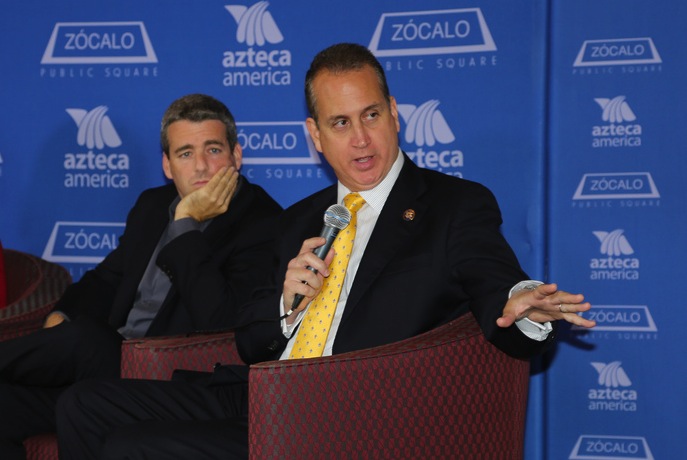 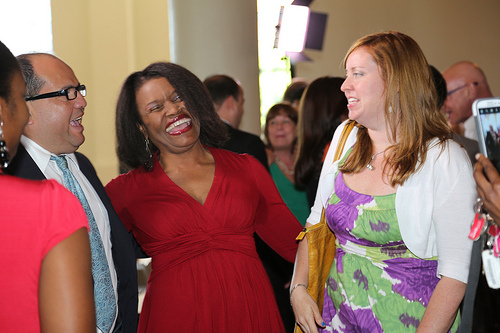 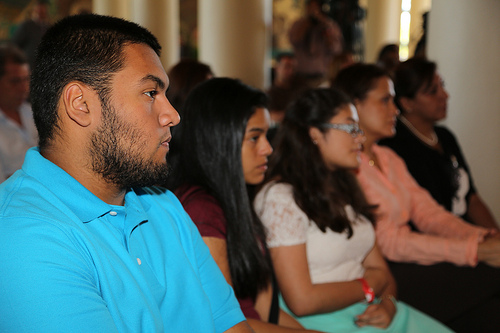 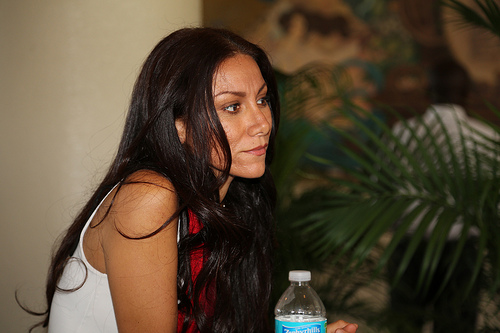 Audience members and panelists mingled at the post-game reception