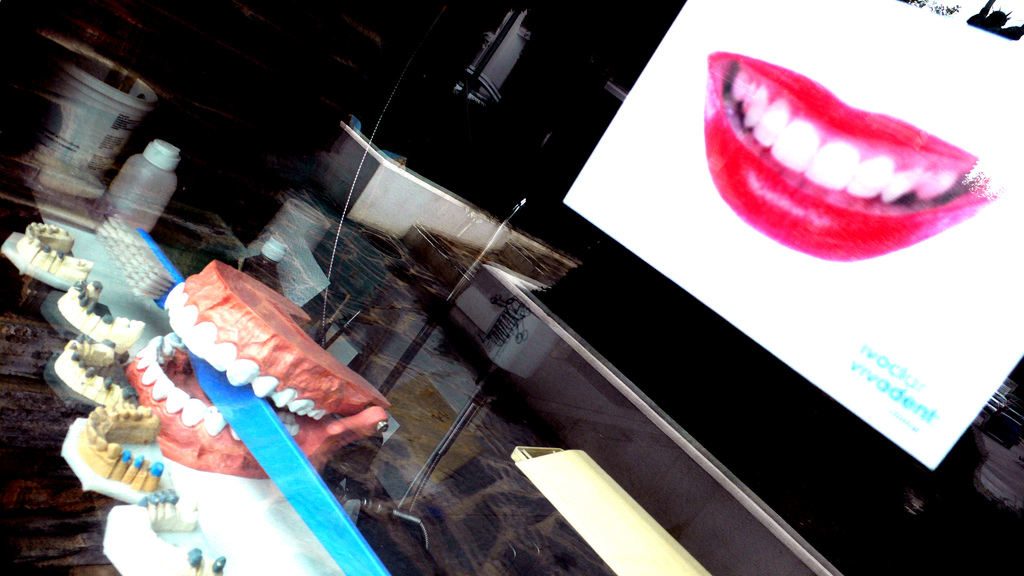 I remember once seeing a British television documentary on the Cold War in which the cameras were admitted to a bunker built for the use of a U.S. congressman in the event of a nuclear attack. Among its enviable amenities was a dentist’s surgery (what Yanks might call an office)—presumably shown as a chilling hint of the likely duration of a stay underground. It was more effective in reminding me of Americans’ obsession with their teeth.

That obsession runs so deep that I almost suspect it’s intrinsic to the American nationality. It is decidedly learned behavior, however. Of all the parts of the body, the teeth are the most likely and the most acceptable—or perhaps just the first—to be molded according to their owner’s whim. Orthodontists even believe they shape the teeth to suit a patient’s sex—“masculine” teeth are made squarer while rounded teeth are supposed to be more feminine.

The ascendancy of American dentistry has its roots (yes, I know; now, spit) in early-20th-century efforts by the profession to enhance its then lowly status. Dentists succeeded to an extraordinary degree in constructing a consumer message that correlates the appearance of your teeth with your socioeconomic status.

But nothing made the look of your teeth matter more than the invention of the Hollywood smile. The problem was identified early on. Teeth showed up gray in early black-and-white films—Errol Flynn’s were famously filthy. To correct this, actors were often required by their studio contracts to have full sets of gleaming new dentures made for them. Perhaps only Bugs Bunny had naturally perfect white incisors. The artificial smile had its birth along with the artificial means of realizing it.

The performance artist Laurie Anderson talks in one of her monologues of a man’s smile made up of “big white teeth like luxury hotels on the Florida coastline.” But the absurdist Irish poet and comedian Spike Milligan marches to the beat of a different drum in his poem, “English Teeth”: “English teeth, heroes’ teeth! / Hear them click-a-clack! / Let’s sing a song of praise to them— / Three cheers for the Brown, Grey and Black!”

It is this second kind of teeth that stuff the mouth of Austin Powers in the Mike Myers spoofs of the Bond films. Our groovy 1960s hero has the worst teeth of anybody in the film but is happily oblivious of the fact. When he comes to defeat his nemesis Dr. Evil, he swings into action using a length of dental floss provided by his glamorous (and dentally hygienic) sidekick, played by Elizabeth Hurley. One episode of The Simpsons goes even further. Lisa Simpson is shamed into accepting braces when the Springfield orthodontist shows her the Big Book of British Teeth.

In the old world, teeth are teeth whatever their color. They play little part in any personal charm offensive. The Mona Lisa makes a secret of her dentition, and even the Laughing Cavalier smirks through tight lips. But in America, teeth are the building blocks of your smile. “Is your smile a powerful attribute?” reads one American dentist’s advertisement. “Or perhaps does it hold you back in your business or personal life? We are pleased to tell you that the brilliant smile of your dreams can be a reality! A healthy, attractive smile will engage everyone around you—from that first impression, so important in professional relationships, to the loved ones you see every day. Cosmetic Dentistry offers you a wonderful opportunity to choose the smile that is just right for you.”

Thanks to the sustained marketing offensive of the American dental profession, perfect teeth have come to be seen as a universal right, though hardly a birthright: getting there is still a rite of passage. Braces are an inescapable feature of adolescence, but they are worth the embarrassment. In the television series Ugly Betty, Betty is ugly mainly because of the braces she wears. Ever-present is the fairytale promise that she will one day unveil a perfect smile.

The fusion of art and science is an important aspect of the pitch. American dentistry cloaks aesthetic tinkering in medical respectability. The underlying language is that of DIY: there is whitening, bonding, and veneer, as well as the more elaborate structural engineering of crown and bridge work. Nothing is mentioned about your bite or health; you only hear of your “healthy smile”—which, these days, may be mocked up in advance for you by a computer graphic. Appearances are everything.

Tinkering with teeth has a venerable medical past. The surgeon John Hunter, in his Natural History of the Human Teeth of 1778, seems to have been the first to use the word “transplant” in relation to human tissue. When transplanting healthy teeth to replace the decayed ones of his patients, he recommended the use of young second teeth harvested from children and suggested having several ready so if one tooth didn’t fit another could be extracted and tried. This gruesome practice became briefly widespread until 1785, when a young woman died of syphilis from an infected implant.

There is art here, too. It’s not mere repairs and refurbishment. Dental preferences are said to vary from country to country. Americans want white, evenly sized teeth, neatly lined up; British dentists, mine tells me, aim for some “characterization,” a certain naturalistic unevenness, which is perhaps a way of saying that we are still rather half-hearted about the whole business.

But it is no surprise that we are all learning the American way of teeth. Despite their hardness, the teeth are considered the second most alterable feature of ourselves after the hair. They are followed by—according to your gender, taste, and daring—breast implants, nose jobs, facelifts, penis enlargement, and general redistribution of fat for a better figure. There is sound biological reason in this sequence. Hair is dead, the teeth partly so, seemingly more mineral than animal, hard-edged objects ready to be chiseled into perfection, a less shocking proposition than remolding softer flesh.

And it is not consumer demand that is forcing the pace; it is bored dentists. In privatized healthcare, there is no living to be made out of everyday repairs and routine check-ups. The professionals need, in the newly appropriate jargon of retail marketing, to interest us in aspirational items rather than distress purchases like new fillings. All this means that there is now the bizarre potential for your teeth to improve as the rest of your body decays. Even Shakespeare’s famous “seven ages of man” are thrown out of joint. Our oblivion may well be “sans eyes, sans taste,” but it’s now far less likely to be “sans teeth.”