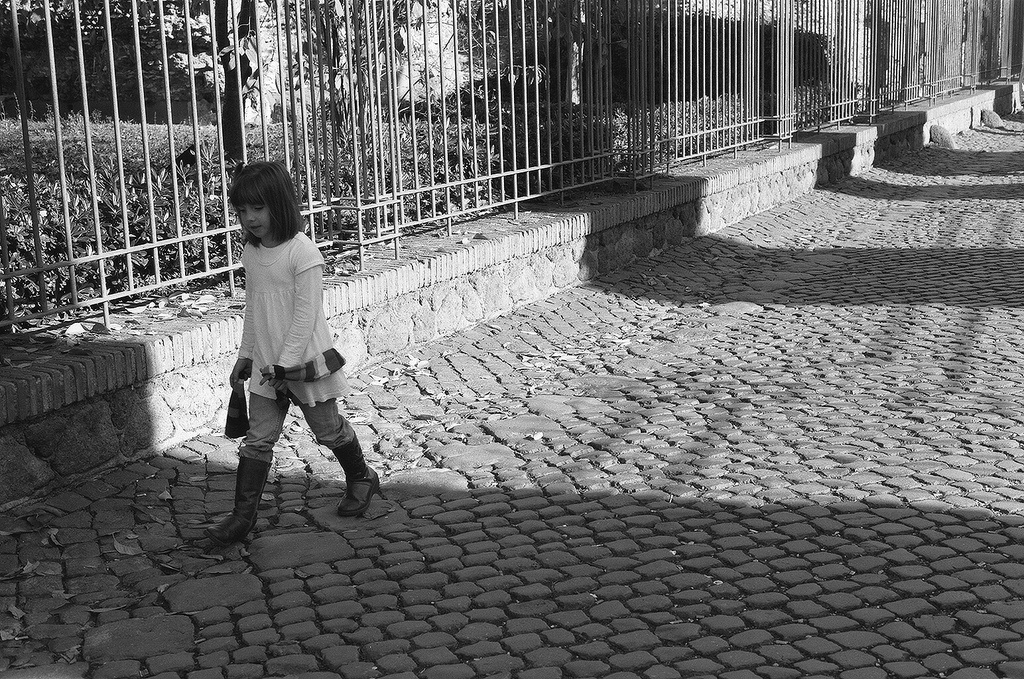 I walked down a fifth-grade school hallway the other day and found a fellow mother nearly in tears. “Andy,” she said, her voice barely above a whisper, “I can’t find my child. I’ve looked everywhere.” School had ended over half an hour earlier. “We’ll find her,” I said, with a calm, authoritative voice I borrowed from some television detective.

This isn’t the beginning of a tale of an agonizing vigil. There was a brief hunt, and a helpful teacher unearthed the girl from an after-school program her mother thought she hadn’t planned to attend. Scolding, hugs, thanks to all who helped—a happy ending achieved in 10 tense minutes.

No, this is about the feeling that her mother and I barely kept at bay as we walked briskly through campus—that feeling of terror threatening to take over with every determined step. Why did we both feel so scared? What is the source of this panic parents feel whenever a child of ours isn’t right where we thought she was?

Long ago and far away, it took a series of phone calls and a thorough search before we were convinced that something dreadful had happened to our children. These days? We are convinced immediately. Most of us are loath to let our kids hang out with friends anywhere they might be visible to strangers. Of course this makes sense in some high-crime neighborhoods. Yet even in the safest parts of town, we live a fortress lifestyle. As far as our children are concerned, the drawbridge is always up.

I can’t help but contrast this with my own childhood. I thought nothing of biking a mile to the next town over, where a few coins went a long way at the candy counter of The Smoke Shop. Maybe I told my mother I was leaving when I went on this urgent errand. Maybe I didn’t. I recall long afternoons gathering with my friends and heading down a hill behind the house across the street, following the creek that wended its way through our neighborhood. We’d play Explorer, put creepy crawlies on each other’s arms, run away when the big kids marched through. Did adults ever come down to the creek? Of course not. The creek was our Narnia; it never occurred to us that adults even knew of its existence.

So when and why did childhood go into lockdown? I can only hazard a few unscientific guesses. The increase of two-income families—something this working mom is grateful for—results in a far more programmed, less free-range life after-school. The deinstitutionalization of the mentally ill has left some very troubled folks either homeless or housebound—sometimes right down the block from the rest of us. The 24-hour newsfeed, both online and on our flat screens, ensures that the Madeleine McCanns and Natalee Holloways of the world have enduring star power. Then there’s Hollywood adding to our collective neurosis. Although rare as a winning lottery ticket in real life, serial killers are a dime a dozen down at the multiplex.

The result? When we see a pre-adolescent happily biking around the neighborhood—well, we seldom see it, but when we do, we think, “Where are his friends? Where are his parents? Why is he alone?”

Actually, let me amend that. We’re fine with alone. Kids alone in their houses after school and on weekends, pigging out on snack food, slightly bored, heading into their fourth hour of the Disney Channel or Call of Duty—that’s okay. So what if years of this lead to antisocial behavior, depression, or obesity? The important thing is that we know where they are.

I don’t see us ever returning to a “Go where you like and be home by dinner” mindset, but something’s got to give. Very young children need a watchful eye, but kids in those middle years need to learn to play on their own, explore their world, and have some adventures we know nothing about. Who knows? If they get ever affordable enough to be a staple in every backpack, cell phones—which, let’s face it, are pretty effective tracking devices—might finally be a kids’ Get Out of Jail Free card.

I’m reminded of this imperative when I look at pictures of one of my little girls—not the one who is still little and under my thumb, but old photos of her much older sister, who years ago slipped out from under my grasp. After a lot of love and probably way too much hovering from her parents, my oldest child now lives five states away, on a college campus just large enough to get lost in.

I hope she does that frequently.