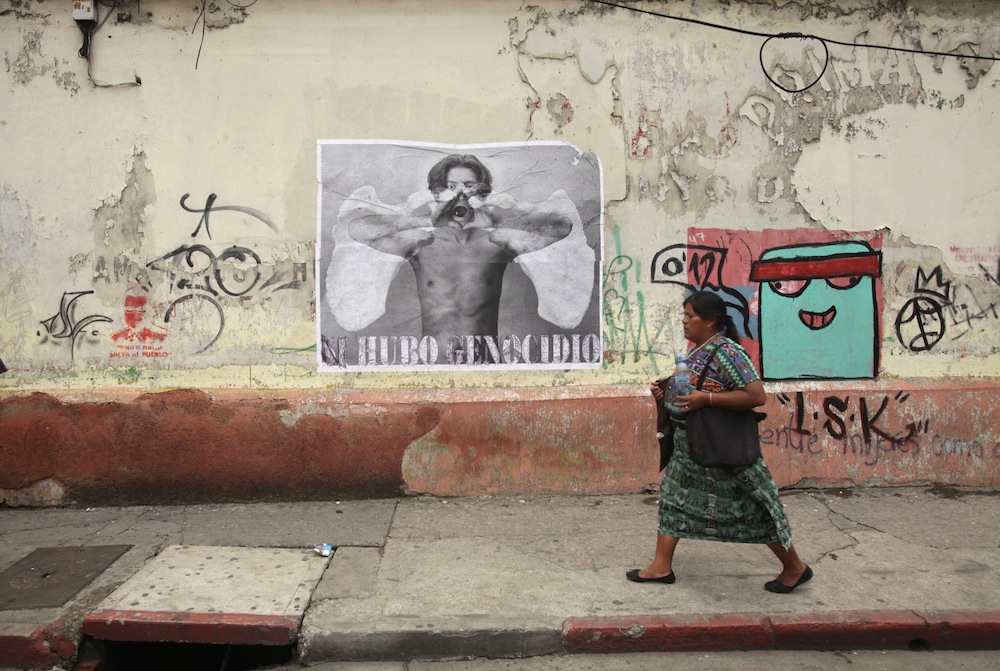 On May 10, a Guatemalan court made history when it found General Efraín Ríos Montt guilty of genocide and crimes against humanity committed while he controlled the government in the early 1980s. This represented the first time any nation has convicted a former head of state for genocide, and it was a watershed moment for global efforts to seek legal accountability for human rights atrocities. Although the Constitutional Court partially annulled the judgment on May 20, the debate it unleashed continues in full force.

The case is also an opportunity for Americans, who have generally failed to acknowledge our responsibilities for brutal Cold War-era repression in Central America, to reflect on a genocide in which the U.S. government was arguably complicit. Guatemala suffered one of the most brutal cases of government repression in the Western Hemisphere, a 34-year-long conflict whose goals were guided by U.S. foreign policy. The Guatemalan truth commission estimated that 200,000 people were killed, 50,000 of whom disappeared, while also concluding that the state committed genocide against the country’s indigenous peoples. Thousands of villages were razed, hundreds of massacres were committed, and torture, rape, and abuse were institutionalized through “scorched earth” policies that were most intense under Ríos Montt’s government.

While more than 90 percent of serious violations were committed by the state, Guatemalan courts have pursued only a handful of prosecutions. The case against Ríos Montt and co-defendant José Mauricio Rodriguez Sanchez, his former intelligence director (who was acquitted), represents both the first time the country has brought a case against high-ranking leaders and the first time it has indicted anyone for genocide.

The genocide charge, conviction, and subsequent annulment have polarized Guatemalan society. Many people, including representatives of indigenous groups and human rights advocates, see the case—which focused on specific abuses against the Ixil people, one of the country’s many indigenous groups—as the most significant challenge ever to Guatemala’s culture of impunity. It is both an official vindication of the value of decades of heroic struggles to document mass killings and a sign that society may finally be ready to address the criminal and moral responsibility for what is known in the country as “La Violencia.” Following the Constitutional Court’s annulment of the Rios Montt conviction, Guatemalan civil society instituted a nationwide campaign, “ ¡Sí hubo genocidio!”—“Yes, there was genocide!”

For those on the right—conservative politicians, retired military personnel, and the business elite—the court’s judgment is understood as a profound miscarriage of justice, the result of outside manipulation or pandering to the international community. Among these critics is Guatemala’s current president, himself a former general, who has denied that genocide was committed. “When I say that here in Guatemala there is no genocide, I say it from my experiences,” he said in an interview with CNN after the Ríos Montt ruling, referring to his deployment as an officer in the same region and at the same time reviewed by the court, and perhaps revealing a fear that the conviction of the former head of state might lead to further prosecutions against other former military leaders.

There are few legal concepts that carry the weight and power of the term genocide. The United Nations Special Rapporteur on the subject has called it “the ultimate crime and the gravest violation of human rights it is possible to commit.” The Genocide Convention, created in the wake of the devastation of World War II, was the first international human rights treaty of the postwar era. It entered into force in 1951, a full quarter century before the major conventions that define the foundation of international human rights law, and has been ratified by more than 140 states (including the United States, which has a generally poor record of accepting human rights treaties). Yet it is only in the last two decades—with the creation of various new courts such as the ad-hoc tribunals for Rwanda and the former Yugoslavia, the International Criminal Court, and the Iraq High Tribunal—that the commitments enshrined in the genocide convention have been put to practical use. The first international genocide conviction was not until 1998, a half-century after the convention was drafted, and the Ríos Montt case represents one of only a handful of genocide prosecutions.

The crime of genocide is defined in Article 2 of the Convention as the “intent to destroy, in whole or in part, a national, ethnical, racial, or religious group, as such” through one or more of five destructive acts. This definition is remarkably consistent throughout the world, with the language copied word for word in the various domestic and international bodies where it is used. But despite the widespread acceptance of the definition, each element presents intricate interpretive and evidentiary issues, and the infrequency with which the charge has been brought means that many ambiguities remain unresolved. How does one understand the meaning of “intent” and then prove that “intent” existed in a particular case? What level of violence is required to meet the definition of the destruction of a group “in part”? What sort of targeting must occur for the group to be identified “as such”? What proof is necessary for determining the existence of “a national, ethnical, racial, or religious group,” and how is membership in this group defined?

The evolving jurisprudence on genocide may provide guidance on these questions, but existing court decisions in one system have no necessary authority for cases processed in a different system. More significantly, the legal proof for a case of genocide often conflicts with popular, morally motivated understandings of the term. For example, the plain language of the Convention allows an individual to be found guilty of genocide without the death of a single individual if there is a clear policy of “forcibly transferring children of the group to another group.” Conversely, look to the case of Cambodia, popularly referenced as one of the most significant cases of genocide since the Holocaust, in which as many as 2 million people died under the terror of the Khmer Rouge in the 1970s. However, these mass killings, horrific as they clearly are, may not meet the definition of genocide because the vast majority of victims were from the same national, ethnic, and religious group as the perpetrators, but were targeted for political reasons. This has created a surprising outcome in current trials in the Extraordinary Chambers in the Courts of Cambodia, where charges of genocide only apply to specific subgroups of the vast victim population—the Cham, an ethnic minority, and Vietnamese, a national group, rather than applying the crime to the brutal mass slaughter of millions—formalizing a stark division between the specific legal application of the term and the popular understanding of its descriptive power.

The debate over the Ríos Montt case also highlights the tensions between genocide’s status as a complex crime whose meaning in practice is steadily evolving and its longstanding status as the most significant mode of moral condemnation for atrocities. Those who deny the genocide claim against General Ríos Montt assert that government repression, severe as it may have been, was part of a legitimate counter-insurgency effort where the lines between civilians and combatants were blurred. They argue that the state’s intent was not to target the Ixil people for destruction but to stamp out a leftist insurgency rooted in the countryside and in areas with high concentrations of indigenous people. Those supporting the genocide claim draw attention to the targeted assassination of indigenous leaders, mass resettlement programs, and the identification of the Ixil, in general, as enemies of the state. They point to the killing of thousands of unarmed indigenous villagers—coupled with systematic rape and torture and the targeting of women, children, infants, and the elderly—and assert that such actions define the state as responsible for genocide.

As heated, threatening, and potentially dangerous as discussion over these issues may be, the Ríos Montt conviction has forced Guatemala to confront its past in a way that no other action has done, not even the 1999 truth commission report that made similar claims. And herein lies the complex power of the term genocide: Its profound condemnatory nature through specific prosecutions demands a response and requires an engagement with the substance of the claim in a way that is unique among serious crimes.

Only a few years ago, defenders of the military’s action during the country’s civil war routinely denied that massacres, disappearances, torture, rape, and other human rights violations were ever committed by the state. Yet now, confronted with the public airing of detailed records of violence committed under the Ríos Montt regime, there are few critics left who dispute some level of official responsibility for brutal atrocities. Even those denying the genocide charge have barely criticized Ríos Montt’s conviction for “crimes against humanity,” which refers to severe acts of violence committed in a widespread and systematic manner and was one of the core crimes developed in the Nuremburg prosecutions against high-ranking Nazi leaders.

The ongoing legal procedures in the Ríos Montt case, from the recent annulment of the judgment to whatever comes next, is part of a process in Guatemala and around the world through which we are all learning about the meaning of genocide. This involves finding a balance between the specificity of the term’s technical application and its broad social and moral authority, with an understanding that both are core elements of what genocide is and must be.

Regardless of whether the conviction is sustained (or whether Ríos Montt, who is 86, passes away before the process reaches completion), two irreversible feats have been accomplished by this case. The Guatemalan leader was convicted of genocide by a legitimate court respecting due process protections. And, by focusing on the core issue at stake—genocide—the case has forced Guatemalan society to reckon more seriously with its brutal, tragic history, opening the space for a debate has served the goals of truth and accountability.