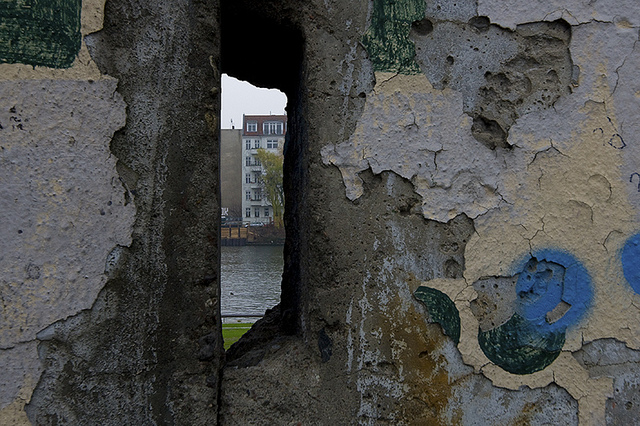 There were a few things the Stasi never found out about me. One was the mini-laboratory.

I was a Lutheran pastor and underground environmental activist in the German Democratic Republic, and I was desperate to develop independent data on the health of our heavily polluted rivers and drinking water. Such research, in East Germany before 1989, was a criminal act; all environmental data was classified.

So friends of mine from the West smuggled in a mini-lab for water testing—equipment that was handed over to me in a parking lot along the transit road to West Berlin. Those parking lots were heavily monitored by the Stasi, and I was terribly scared. We had planned the transaction over the phone using a code, and it worked. There is not one line about it in my Stasi files.

It is important to remember such times, especially today when the consequences of surveillance are being debated again in Germany and around the world. We all recall the fall of 1989, when thousands of people all over the German Democratic Republic (GDR) marched from the churches to the streets and squares. They demonstrated for the daily bread of democracy, for free and fair elections, and for freedom of the press and the right of free assembly. There were no counter demonstrations. It seemed that the entire people had agreed to get rid of the dictatorship. How had a state kept this population of 17 million in check for the 40 previous years?

The answer: through surveillance, incarceration, and terror.

The wheels of terror were implanted in every brain. The moment a critical thought took shape, the wheels of terror started turning. Who would be able to hear this and make note of it? Which file would it land in? What could the consequences be, what reprisals would be taken? Could there be an impact on the children’s schooling, their apprenticeship position, their college placement? Even preschoolers and kindergarten kids had internalized that. They were trained by their parents and grandparents to differentiate between the things that were public, and thus could be talked about at school, and the things that had better never leave the house.

The guarantor for terror and order was the “Stasi,” or State Security. The “Eavesdrop and Peek,” as it was known in the vernacular, was always and everywhere. By the end, in 1989, the Stasi had 91,000 official and 174,000 non-official employees, or IMs (Inoffizieller Mitarbeiter), working undercover and spying on their own people. In a village of 1,000 inhabitants, for example, 15 of them spied on the rest of them. Since nobody knew whom the Stasi had recruited, you had to be careful always, and you knew that an IM worked with you, monitored you at the village fair, shared a table with you at the local pub, or sang with you in the church choir. Hardly anything went undetected. Like a fungus, surveillance permeated all of social life in “the service of Socialism” and to protect the country from the “imperialistic class enemy.”

How much the Stasi had penetrated—and how deeply its power had been branded onto society—became apparent during the demonstrations leading to the revolution in the fall of ’89. A huge crowd of people marched through downtown Eisenach in the state of Thuringia, where I live, chanting. But the moment the train of protesters passed the headquarters of the Stasi, they fell silent. Nobody shouted anything.

Later, at another demonstration, I witnessed a worker scaling a fountain and addressing the crowd. He started out with: “My name is …”, “I live in …’’, “I work in …” By refusing to remain anonymous, by stating his name and address and workplace, he revealed, in front of everybody, that the Stasi had lost its power over him. And when the Stasi headquarters were occupied, the listening devices disarmed and turned off, and the files were secured, the curtain between the Stasi and the citizens was pushed aside, once and for all.

Before the revolution, I was seen as a threat to the regime in more than one way. Not only did I work with friends and colleagues to expose the environmental damage done by the state; I was also a member of groups supporting a free church. I even spent some time as an evangelical pastor directly on the border with West Germany and delivered sermons and speeches critical of the regime.

After the revolution, I was often asked if I was startled by what I later found in my Stasi file. No, I said, those reports didn’t shock me at all. I was rather amused by the trifles that 10 spies managed to gather about me (even as they missed our smuggling in of the mini-lab for water tests). It is with enormous gratification that I study photos, shot from a briefcase, and exact sketches of my house, explaining where my wife and I had hung quotes by the playwright Bertolt Brecht or philosopher Rosa Luxemburg, a deliberate act to criticize the regime. We must have unnerved the state. Why else all that hassle?

But the files were also startling: the Stasi not only surveyed the everyday life of citizens but also influenced biographies. In my case, the Stasi sought to document my underground political activities with the goal of gathering enough material to take me to court. But they did not wish to wait until I made a mistake worthy of prosecution. Instead, they used their snitches to plant rumors in my parish and strip me of the backing of my superiors in the church. They even tried to set an informer on my wife to destroy our marriage. Snitches provoked me, engaged me in topical conversations, and intercepted letters, thus interrupting personal contacts and indirectly influencing and manipulating my life.

At the time, we didn’t understand the scope of the Stasi’s work, but we knew they were there. I was active in an environmental group back then. We figured that an IM must have been part of the group. The Stasi was always in the room. At events, when the guests were welcomed, we cynically extended a welcome to those “who had to be here professionally.” We spoke in a more self-disciplined manner and criticized the state in a much more reasonable fashion. Before I uttered certain phrases, I made sure I was prepared to go to jail for them. Only then did I speak up. Fear led Free Speech by the nose.

We never ceased to be preoccupied with the thought of who in the group might work for the Stasi. We always made sure that the group remained small, and at times we purposely put off potential members because we didn’t trust them and had no mechanisms for screening them. We never openly accused anybody of being an IM; we feared that someone so accused would be unfairly ostracized if we were wrong. We used tricks to try to find out who might be an IM, such as deliberately launching incorrect information with the purpose of tracing it and finding out who ratted on us.

Once, at a meeting, we went through the papers and bags one attendee had left behind to see if there were any hints of spying activity, thus crossing the line ourselves. We never found out who the IMs were. Our suspicions were almost always wrong. To this day, when I run into people, I feel sorry that I suspected them of being an IM and treated them with distrust and coldness.

The distrust lingers because there has been no real accounting between victims and the perpetrators of surveillance, and so there can be little rebuilding of relationships. In the past 25 years, there was never a climate for an open and public appraisal. This is tragic for the victims who were betrayed by friends, neighbors, and even family members. Their old wounds continue to be reopened. Some wear their hatred like a badge of honor to this very day, categorically refusing to talk to any former functionary.

This can be unfair. Some IMs were blackmailed by the Stasi to work as informers, thus becoming victimized perpetrators. A colleague of mine was assigned to spy on me; after coming clean, he explained in a long conversation how much he himself had suffered from having to be a spy. He tried as hard as he could to avoid me so that he would not have to report on me. That doesn’t excuse the reality that he did pass on information that endangered me.

But he paid a price: he was fired and banned from the priesthood. This was over 20 years ago. Shouldn’t he have been allowed to return to his profession? What is justice? Today I feel guilty for my own role in the path his life has taken.

Too much has been left unresolved. Having worked for the Stasi does not carry a sentence or conviction. There is no indictment on behalf of the victims, and there is no defense for the culprits. Victims can’t ask questions; perpetrators seldom admit their crimes or ask for forgiveness. There is no safe or established place, such as a courtroom, for a process like this to unfold. In this matter, society has failed, allowing the poison of hatred, dispersed by the Stasi, to have its effect to this very day. It is a lesson for those in America and elsewhere who use surveillance: the damage of violating the privacy of others can linger, long after the surveillance is over.

We got rid of the dictatorship and, in the spring of 1990, after the fall of the Berlin Wall but prior to the reunification of Germany, lived in the best GDR ever, without a Secret Service, and with roundtable discussions, open borders, and the sensation of freedom. Freedom amounts to more than simply the liberty to consume and travel. Only when all people—without exception—can decide the direction of their own lives, without monitoring or interference of others, can a society be called truly free. Only when we all are citizens who are served by the government, and not the other way around, will the fear vanish.