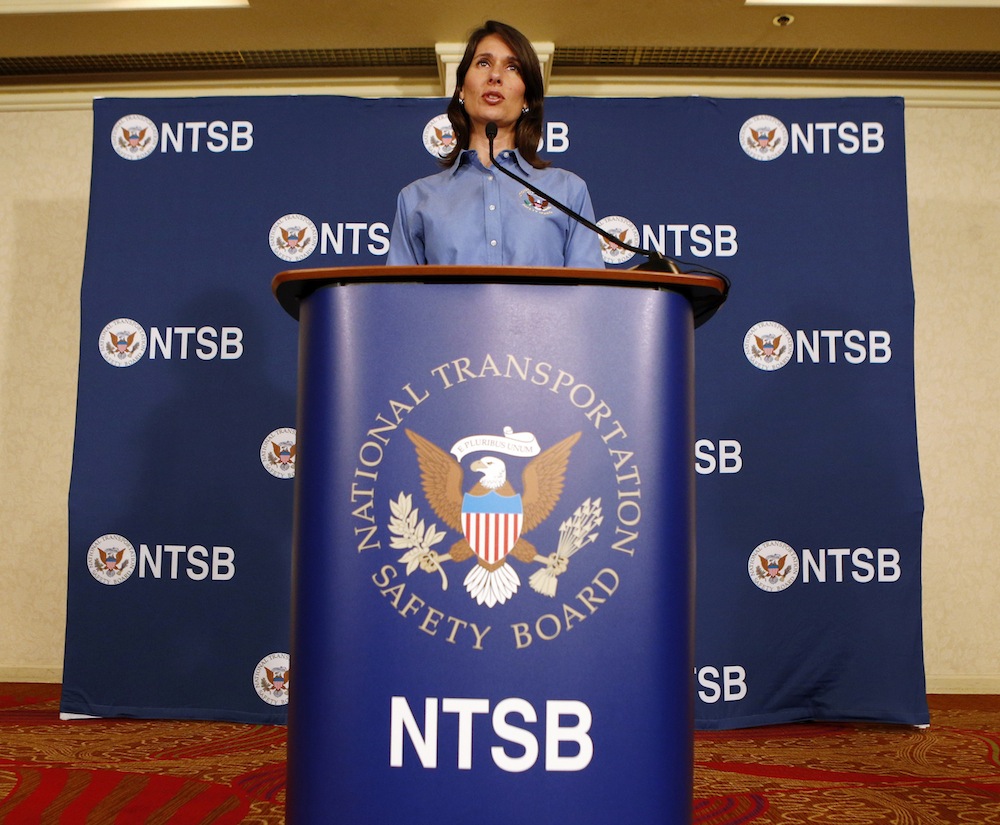 History is full of bold and charismatic aviatrixes: Amelia Earhart, the first female pilot to fly solo across the Atlantic; Bessie Coleman, the first African-American to earn a pilot’s license; Beryl Markham, the British-born Kenyan adventurer; and (to name just one more in a long and lively list) Elinor Smith, the “Flying Flapper of Freeport,” who in 1928, at the age of 17, became the first and only pilot to fly under New York City’s four East River bridges, a stunt she did on a dare.

Commercial airlines, however, are not similarly replete: According to the U.S. Bureau of Labor Statistics, just 4 percent of aircraft pilots and flight engineers are female, a figure that has not budged much over the decades.

So it’s striking that, in the wake of the July 6 crash of Asiana Airlines Flight 214, the authoritative official in charge of the investigation is Deborah Hersman, indefatigable chairwoman of the National Transportation Safety Board (NTSB), the federal agency charged with investigating U.S. civil aviation accidents and other major transportation disasters. As she and her staff have investigated what caused a Boeing 777 to crash while landing in San Francisco, Hersman has delivered public briefings that are models of transparency, patience, and aviation knowhow. Her cool professionalism is a welcome rebuttal to a widespread lack of faith these days in public servants and in government generally. Hersman’s briefings, highlighted on the NTSB website, amount to online-learning courses in how airplanes, flight crews, runways, and navigation systems work. Connoisseurs of clear-eyed reaction to transportation crises may recall that in 2009, following a fatal Washington, D.C. Metro train crash, it was Hersman who rushed to the scene, criticized the Metro rail agency for not dealing effectively with its aging fleet, and reportedly forbade Metro’s general manager from speaking to the media, lest he spin a contradictory tale to the NTSB’s findings.

Hersman is no anomaly—the face of commercial aviation oversight at the federal level has often been female in recent decades. Marion Blakey, president and CEO of the Aerospace Industries Association, the nation’s leading defense-industry lobbying group, has headed both NTSB and the Federal Aviation Administration (FAA). Her predecessor at FAA was Jane Garvey, a former director of Boston’s Logan International and the first non-pilot to head the FAA. On 9/11, the person who initiated the nationwide shutdown of air traffic was Susan Baer, who at the time was the general manager of Newark’s airport. Baer has run all three major airports in the New York area.

As Amy Laboda, editor-in-chief of Aviation for Women magazine, points out, women have risen through the ranks to head some large regional air traffic control facilities including in Los Angeles. And while female names are largely absent from the ranks of major airline CEOs, women head three of the six top defense contractors.

But why do women remain so scarce in the cockpit? Even as women have made inroads into fields like law, medicine, and engineering—even as entire professions, such as accounting and psychology, have seen women overtaking men—the airline captain’s seat remains as male-dominated as a Wall Street cigar lounge. Women are flourishing in many aviation desk jobs, including leadership positions, but men are still by and large flying the planes.

Claudia Goldin, a Harvard economist who has done groundbreaking work looking at the nuanced reasons why women have made more progress in some fields (veterinary medicine) than in others (neurosurgery), noted that the apparent contradiction resembles academe, where women are better represented in top positions, such as Ivy League presidents, than among “front-line workers,” such as tenured professors. In an email exchange, Goldin, who has written extensively about formal barriers (such as bars on married women working) that kept women out of certain jobs during parts of the 20th century, added that historically, “One of the great barriers to women in aviation was the training that the military gave to men.” Many commercial airline pilots start out as fighter pilots, a job that only became open to women in 1993.

All that time away from home is another barrier—an airline pilot’s job is notoriously hard on family life. “More than half of male pilots are divorced, and there’s another half that have been divorced twice—it’s a hard life for anybody who wants to have a family,” points out Amy Laboda. “I didn’t become a pilot for those reasons.” Laboda was working as a flight instructor when she met her husband, an airline pilot, in an airport, 30 years ago. If she had pursued the same job, she said, “We were going to be leaving notes for each other on the dining room table.” So she went into aviation journalism instead.

But strain on family life cannot be enough to explain women’s absence. Flight attendants spend extended stretches of time away from home, too, and that profession remains 80 percent female. NASA seems to have done a better job than the air industry of elevating women: The incoming class of astronauts is 50 percent women. This could be in part because there are two kinds of astronauts, the ones who fly the spacecraft and the scientists who conduct the experiments. As women have come to be better represented in science, it may be that they are taking the latter pathway to space.

Sexism, alas, can’t be excluded as a contributing cause. Viewer comments on YouTube videos of Deborah Hersman’s briefings reveal not only geeky obsessions with technical aviation terms (and her mastery of them) but a focus on her looks. These give a glimmer of what it’s like for any woman to spend hours shut up in a tight space with a male pilot or co-pilot who may not want her there.

Our culture also seems to have an easier time accepting women in leadership roles involving public safety. The model here would be former Secretary of Transportation Elizabeth Dole, who famously brought American cars the rear-window automobile brake lamp, affectionately known in her honor as the “Liddy Light.” Women are more acceptable as leaders and enforcers when they adopt the quasi-maternal role of making sure we’re safe and sound.

If that’s what it takes to get whip-smart women like Hersman in charge of our aviation safety, so be it. Even so, it would be good to see more women pilots in the captain’s seat. Like all industries integral to our progress and well-being, the airline business needs to maximize the pool of competent and talented professionals from which it draws. The next time I sit white-knuckled in my seat during a round of turbulence, I know whose voice I would want to hear over the loudspeaker telling me it’s nothing to worry about: Deborah Hersman’s. Then I might be inclined to believe it.